It was the greatest puzzle in the world. For three thousand years the ancient Egyptians covered the walls and ceilings of their temples and tombs with a form of writing known as hieroglyphs. More, the bone-dry climate of Egypt had preserved vast quantities of this hieroglyphic text written on papyrus.

When Egypt became Christian in the fourth century A.D., the use of these hieroglyphs, associated with paganism, died out. The last known hieroglyphic inscription was chiseled into stone in the year 394. Within a generation, the last person literate in hieroglyphic writing was dead. Nothing was known of the ancient Egyptian language (Egyptians spoke Arabic after the Arab conquest in the seventh century), so translation was impossible. While it would eventually be known that Coptic—the liturgical language of Egypt’s Coptic Church—was descended from ancient Egyptian, it was at least as different from its ancestor as Italian is from classical Latin.

As a result, almost nothing about Egyptian history or culture was known, except what could be found in foreign sources, including the works of the “father of history,” Herodotus, who had visited Egypt and marveled at its wealth and splendor.

When Napoleon Bonaparte invaded Egypt in 1798, however, it was more than just a military enterprise, for he brought along one hundred sixty “Savants.”

When Napoleon Bonaparte invaded Egypt in 1798, however, it was more than just a military enterprise, for he brought along one hundred sixty “Savants,” among the most brilliant scientists, artists, and scholars in France. In time they produced twenty-nine oversized volumes detailing all aspects of Egyptian life, natural history, landscape, and architecture, one of the most remarkable works of scholarship ever printed. It set off a decades-long craze for all things Egyptian that became known as “Egyptomania.” (The Manhattan Detention Complex is still known as “the Tombs” because the original 1838 jail was built in the Egyptian Revival style.)

The hieroglyphs, however, remained silent.

Then in the year after the invasion, a slab of black granite was uncovered in a town near the coast that the French called Rosetta. (The Arabic name is Rashid.) Although parts were missing, three texts could be made out. One was written in the mysterious hieroglyphs, a second in an unknown script, and a third in ancient Greek. The Savants, of course, could read the Greek and assumed, correctly it turned out, that it was the same text also written in hieroglyphs. At long last, could the so-called Rosetta Stone be the key to unlocking Egypt’s ancient history?

An aside: although discovered by the French, the Rosetta Stone is now in the British Museum, not the Louvre. Shortly after the arrival of the French army in Egypt, Admiral Horatio Nelson found the French fleet at anchor in Aboukir Bay and destroyed it, sinking or capturing eleven of the thirteen vessels and trapping the French in Egypt. Napoleon soon returned secretly to France, and in 1801 the French army in Egypt surrendered to the British. The Savants were allowed to keep their drawings, specimens, and such, but the British admiral insisted on taking the big stuff—fifty tons of it—including the Rosetta Stone. It is today the single most visited artifact in the British Museum’s vast collection.

Over the next quarter century, two men, the English Thomas Young and the French Jean-François Champollion, unraveled the mystery in the greatest work of decoding in history. (Remember that the team at Bletchley Park not only had an early form of the computer to help them, they also knew the grammar and vocabulary of the German language. And they knew the Enigma texts were military orders, not sonnets or sales receipts. Young and Champollion did not even know if ancient Egyptian ran from right to left or left to right. It turned out to do both, but the animal hieroglyphs always face the beginning of the line.) Edward Dolnick tells the tale of the decipherment in his new and fascinating book, The Writing of the Gods: The Race to Decode the Rosetta Stone. Long a science writer for The Boston Globe, Dolnick is also the author of The Seeds of Life (2017), about the discovery of how human fertilization is achieved, and The Clockwork Universe (2012),about the birth of modern physics in the seventeenth century. All three are well worth the reader’s time.

The two main characters in The Writing of the Gods could hardly have been more different. Thomas Young (1773–1829) was a remarkable polymath, tremendously gifted in languages (he spoke “too many to list” by the time he was a teenager). But he not only helped decipher the hieroglyphs, he also developed the theory that light acts as both a particle and a wave (contrary to Newton’s idea that light is a particle only), and he was the first to explain how color vision works. When asked to write an article for the Encyclopaedia Britannica on acoustics, he did so and suggested that he might write other articles on subjects ranging from capillary action to hydraulics to ships. Altogether he contributed an astonishing sixty-three entries to the encyclopedia.

Jean-François Champollion (1790–1832), by contrast, while equally gifted in language, was more single-minded. He was interested only in language and in Egypt. As a teenager, he proclaimed that he would decipher the hieroglyphs. Convinced that Coptic must be a descendant of ancient Egyptian, he studied it deeply.

It was Young who made the first breakthrough. Like everyone else, Young believed that the hieroglyphs were not an alphabet, but rather made up of ideograms, with each character standing for an idea, not a sound, as thousands of Chinese characters do. It bears noting that there is no purely ideographic language, however, other than mathematics. Speakers of any language can read 2 + 2 = 4.

Young astutely realized that foreign words can’t be expressed in ideograms and wondered how they were dealt with in Chinese. He asked Britain’s leading Chinese scholar, John Barrow, and learned that foreign terms in Chinese are spelled out using characters that resemble the sounds in the foreign word (you just ignore the meaning of the characters). Dolnick, who has a considerable gift for linguistic analogy, likens this to modern phonetic alphabets used to spell out letters when clarity is important, such as spelling “wood”Whiskey-Oscar-Oscar-Delta.

One word that appeared frequently in the Greek text on the Rosetta Stone was “Ptolemy,” the name of the pharaoh who was, of course, of Greek and not Egyptian descent. But where to look for it in the hieroglyphic text? The French Savants had noted that some hieroglyphs were surrounded by an oval. They named the oval shape a “cartouche,” the French word for the cartridges used to load muskets, which these hieroglyphs resembled.

Young wondered if these cartouches might be used to set off royal names. With nothing to lose, he transliterated the hieroglyphs within one to yield the Greek word Ptolemaios. As Dolnick puts it, after nearly two thousand years of silence from the Rosetta Stone, “Thomas Young had leaned close and heard it speak.”

Of course it was only a guess. It needed to be confirmed, and here Young made a mistake. He assumed that only the words in cartouches were alphabetic and that those outside were ideograms. With just the examples on the Rosetta Stone to work with, he was stymied, and he soon moved on to some others of his innumerable interests.

Here enters William Bankes. He was born to great wealth. His house in Dorset, Kingston Lacy, is one of the greatest country houses in England, filled with treasures, many acquired by him, for he was an ardent traveler and collector. In the south of Egypt, he came upon an obelisk, about twenty-five feet high. He had it shipped home along with its base, and it can be seen today at Kingston Lacy. The base had writing in Greek, and the sides of the obelisks were adorned with hieroglyphs.

Bankes had the two scripts copied and sent them to Young and to a French linguist who forwarded it to Champollion.

There were two cartouches on the obelisk, one matching the cartouche on the Rosetta Stone. Both Ptolemy and Cleopatra (not the famous Cleopatra but an earlier one) were mentioned in the obelisk’s Greek text. Here was a test for Young’s guess of several years earlier. The two names had several letters in common, and Champollion plugged them into the new cartouche, spelling out _ L E O P _ _ _ _. One repeated hieroglyph was in the right places to be an A, spelling _ L E O P A _ _ A. One can imagine Champollion’s excitement.

He was off to the races, rapaciously adding to his collection of hieroglyphs. There was no stopping him now, although he had many linguistic hurdles still ahead of him.

A few decades after Champollion’s death, a new bilingual stone, with text in both hieroglyphics and Greek, was found. Here, at last, was the acid test of Champollion’s work. And the translation of the hieroglyphs according to his system perfectly matched the Greek text.

Dolnick is a gifted writer, with many delightful turns of phrase. I especially liked the one explaining that while the discovery of the elaborate tomb of King Tut made him the most famous, politically he was “the Millard Fillmore of Pharaohs.”

The Writing of the Gods reads like a detective novel, one with a particularly interesting cast of characters and a very important historical story to tell.

John Steele Gordon is the author of An Empire of Wealth: The Epic History of American Economic Power (Harper Perennial). 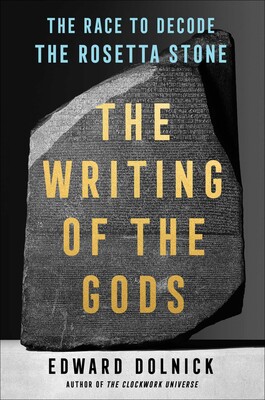 The Writing of the Gods: The Race to Decode the Rosetta Stone

All the rest is talk

Hornblower at the helm

The triumph of Thomas Sowell

The cost of words