One of the many signs of our “age of chaos,” exemplified by, for instance, the hasty tearing down of statues of historic figures, is the re-writing of our ideas about God and the human person, often done with an astounding degree of historical illiteracy. Woke culture arrogantly reframes the past, denying most of it any significance today (except topics like slavery). This dangerous trend has in a short space of time created false hopes and empty goals that amount to a prison, not a path toward human excellence. Sohrab Ahmari, in his new book, The Unbroken Thread, questions these modern certainties and opens up insights from many traditions that have led people for centuries to find wisdom and live heroically. His inspiration came from considering the world his young son will inherit and how to bind him to ancient traditions. Many parents struggle with these challenges as the pace of change accelerates. In lyrical prose, Ahmari presents deep wells of wisdom from famous figures such as St. Augustine, Confucius, Abraham Heschel, and others. In so doing he reveals how flawed the current shibboleths really are. “Science” cannot replace wisdom.

His first set of questions about God throws light on the modern tendency to see religion as a private matter, which undervalues its role in bringing meaning to the common good of society. Is truth to be found only in the latest facts and statistics, or do we have to include a moral vocabulary to understand reality? Does faith lack a reasonable basis? Briefly examining C. S. Lewis, Socrates, Augustine, and Thomas Aquinas, Ahmari finds that each of these thinkers wrestled with these questions, coming up with satisfying answers that probed moral reasoning and discovered important distinctions like the assent given to scientific truth and the assent given to belief. Heschel’s life and work on observing the Sabbath opens a pathway to understanding the place of prayer and ritual in our lives. For him, “the human is at home with the divine.” Howard Thurman, descended from slaves, found in religion the divine concern for the dispossessed after having experienced personally that the hatred of others brings isolation and sometimes death to the spirit.

The current idea that spiritual matters are private neglects the incarnational outlook of Christianity. In establishing the Christian community, the early church fathers had to argue with the pagans, while Augustine had to defend the city of God. The privatization of religion, a position accelerated by the Protestant Reformation, negates a long Christian and Jewish tradition of communities sharing an account of ultimate meaning. Rituals and feast days shape a community and expand our individual horizons to include the past and the future, the human and the divine. Privatized rites narrow our minds and hearts. Ritual in pagan cultures also served this purpose and bound generations together with meanings that shaped family and tribal life. Communities of faith have to explain and sometimes defend their rituals and beliefs. The common assumption that religion and politics do not mix denies the communal element of believers in society. Those who live by faith seek to promote brotherhood and concern for the poor and the common good of others. Augustine wrestled with the role of politics and defended the role of people of faith in promoting good for all. His writings influenced thought for a thousand years. In later centuries, liberalism separated politics from the shared quest for the highest goods, including spiritual goods, in common life. Today, the isolated self seems satisfied with temporal goals instead of looking for rewards in the next world.

Another modern credo, that of thinking everything out for oneself—a Sixties slogan—is often pursued without reference to conscience. But consider John Henry Newman, a staunch fighter against nineteenth-century liberalism.He points out that conscience is not thoroughly subjective. Liberals think that conscience is unbound, but it always looks for authorities of some sort to guide it. For Newman, we are never independent of divine law, and conscience should be formed by true and tested guardians. Absolute freedom of thought is a delusion. The tendency to find fault with everything in social and political life is often an expression of self-will and virtue signaling, not an assessment rooted in truthful guides.

In his set of questions on what it means to be fully human, Ahmari decries the dismal state of our common life. Families are suffering on all sides. There is a loss of a sense of filial piety, which is one of the gifts Confucius gave to China. He taught that family standards affect the internal and external relations that a family has with its community and teach us to sharpen our moral imagination. A root of virtue is the way we treat our parents. There is a mysterious parental bond—even with bad parents—that is being lost today as life becomes more transactional. Family standards teach lifelong habits and improve both family relations and other aspects of life, such as work. Pursuing private goods instead of the common good breaks these customs.

Widespread in contemporary culture is a rather materialistic idea of unlimited individual freedom that paradoxically limits personal growth instead of enhancing it. Without ideals of moral excellence to ground our freedom, life can sink to ever lower levels. When moral horizons contract and evil is not taken seriously, life can become very selfish indeed. Aleksandr Solzhenitsyn’s prophetic 1978 pronouncement on America’s lack of soul was an affront to liberal minds, but the consequences have been made clear. For example, many consider sex to be private and the body to be one’s own property, something Western courts have affirmed. This narrow view of sex is the opposite of many religious traditions that see sex and marriage as the foundational units of society. Traditions over many years have articulated natural law and see sexuality ordered to the ends of the human person and to families. Now on the heels of a privatized view of sex, we are presented with a new ethic of the body accounting for multiple “genders.” Ahmari sees this as a gnostic vision that expresses hatred of our bodies and at the same time desires absolute freedom. This abstract account of human nature, divorced from observable reality, is dangerous. If you have no nature, you have no norms. Gender ideology presents us with the idea that our physical body is alien and malleable: we are not confined by our physical body and can choose and change our gender. This position creates an estrangement between persons and the world they live in. It is a move away from ordered reality, especially the family. Gender ideology is adding to today’s many levels of alienation, an alienation only furthered by, to name but one example, the rise of the digital classroom. All this affects our sense of who we are as persons, and not in a benign way.

The understanding of the human person as taught by Christian faith comes to us through the bodily nature of Christ’s Incarnation. God became a human being with a body so as to teach the ways of virtue and community and to recover the damage done by sin to human life. This ideal of a holy life lived in a body guided by faith and reason is possible and desirable. The two-thousand-year-old tradition of Christianity teaches discipline of the body for transcendent ends—for communion with both God and man.

The author offers at the beginning and the end of his book an example of a modern man whose act of freedom is not esteemed today and yet was an act of real freedom, not the illusory kind taught by the charlatans who have controlled our culture since the Sixties. Maximilian Kolbe, a prisoner at Auschwitz, gave his life for a fellow prisoner who had a family. This kind of freedom involves virtue, discipline, love, attention to human need, and a spirit of generosity. It is a high degree of human freedom that is formed by traditions that reflect deeply on the human experience and call us beyond selfishness. Ahmari’s reflections on wisdom in many traditions are not an act of nostalgia on his part but instead an argument for the importance of non-scientific knowledge to live a deep human life. We cannot change what has happened in history, but we can resist the cultural forces that insist on overturning or ignoring the sources of a more profound life. Isaiah Berlin, in his famous essay on Tolstoy, said that there has always been a quarrel between rival types of knowledge, one that results from methodical inquiry and another that consists of a “sense of reality” and wisdom. Those who write about the reasons of the heart must be heard along with the scientists. As Berlin had it,

Wisdom lies in an understanding of, and communion with, la terre et les morts—the great unalterable movement created by the links between the dead and the living and the yet unborn and the land on which they live.

Ahmari proposes a path out of the chaos in our culture today, discerning the reasons of the heart and promoting moral excellence. He frames the questions we all need to ponder and identifies many topics that families and religious leaders need to address—the sooner, the better.

Mary Ellen Bork is a writer in Washington, D.C. 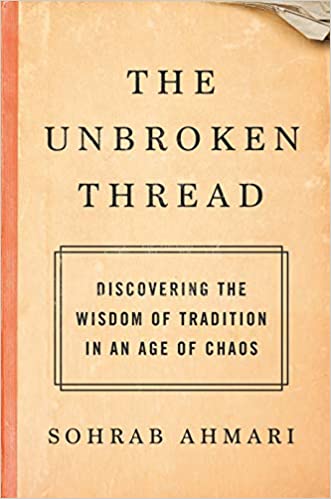 I Defounding America by Myron Magnet

II Saying no to life by Nikolai Tolstoy

V The ideal of a gentleman by John Kekes