The title of “citizen” has lost much of the simple grandeur it once had. It deserves far better, and as Victor Davis Hanson shows in his learned, powerful, and troubling new book, The Dying Citizen, the steady devolution of citizenship speaks volumes about where we are today and where we seem to be heading.1 In fact, citizenship seems to stand at the very center of it all. The most destabilizing elements of today’s political life—the erosion and displacement of the settled and propertied middle classes by the forces of economic globalization, by ceaseless waves of increasingly unassimilated immigrants, and by the divisive influence of the politics of identity and of post-nationalism—seem to be aimed directly at the concept of citizenship, and together work to pound it into oblivion.

Such destructive efforts cannot be allowed to succeed. If they do, it will be a loss of immense proportions for all humankind, a wanton abandonment of one of the greatest political achievements of the ages. But it could happen. There never has been anything natural or automatic or inevitable about the ideal of citizenship, or about the creation of the kind of societies in which it flourishes. On the contrary, as Hanson says early in his book, human history is “mostly the story of non-citizenship,” of various forms of coercive rule—feudalism, monarchy, oligarchy, dictatorship—in which the habits of self-rule are thwarted and active citizenship cannot take hold. What we have had here in the United States is something rare and hard-won. There was a “long road from antiquity to our own Constitution,” Hanson argues, and the concept of self-rule that the Constitution embodies remains fragile and vulnerable. There is no guarantee that the journey could ever be retraced, should the thread be lost.

Citizenship in its most robust sense is something far more than a technical status accorded to certain current residents who pay taxes and have voting privileges. Citizenship animates a free people’s way of life. It draws upon a sense of membership in a society of civic equals—free and independent citizens, not fearful and dependent subjects, who may be unequal in many ways, but who share a civic equality, in which respect for one another’s equal rights and equal standing under the law is a guiding moral premise.

Citizens cannot be vassals. The concepts are incompatible. They are not merely residents of a particular geographical patch, nor are they bound together by a shared tribal or religious identity. Nor can they share together in an abstract and fanciful “citizenship of the world.” Instead, being a citizen means living under a particular constitution and laws to which one has consented freely, with or through elected representatives. Citizens are bound together by assenting to a uniquely civic understanding of their relations to one another, an understanding that rises above their economic status, their own ethnic and racial identities, and other such primal loyalties, and which incorporates a shared culture and a shared history of the nation, along with certain privileges and duties.

Hence citizenship must be learned, and civic education should be an initiation not only into a canon of ideas, but into a community. And not just a community of the present, but also of memory—a long human chain linking past, present, and future in shared recognition and in gratitude.

That is the ideal, at any rate, and it has prevailed in America for most of our history. But in recent years Hanson sees everywhere an attenuation of the preconditions needed for robust citizenship, and a simultaneous disintegration, a reversion to what he calls “precitizenry,” a recrudescence of forms and ideas that were thought to have been overcome in our present-day institutions. Thinkers since Aristotle have recognized the need for a middle class (mesoi)that serves as a mediating and moderating influence between rich and poor. But Hanson sees a new kind of “peasant” emerging, from which the globalized economy has taken away the capacity for economic self-reliance that is required for civic freedom.

He also sees a growing renunciation of the bedrock principal that countries must privilege citizens, who know their land and know its history and have consented to be governed by its laws, over mere residents. In addition, there is emergent a new tribalism, which refuses to subordinate primary identities to the discipline of civic life, even as it demands “inclusion” at every turn. As Hanson observes, “the more [citizenship] is stretched to include everyone, the less the likelihood it can protect anyone.”

The elites are “postcitizens,” who benefit from the mobility and placelessness of the global economy, and who have no particular use for national or local identity.

The elites, by contrast, are “postcitizens,” who benefit from the mobility and placelessness of the global economy, and who have no particular use for national or local identity. (Roger Scruton adapted a word for this attitude: “oikophobia,” or distaste for one’s own home.) Hence elite opinion shows only the most faint regard for citizenship, however much it may occasionally fawn over the idea of “civic education.”

Rather than seeing politics as the proper avenue for deciding contested questions, postcitizens favor a movement toward governance by unelected bureaucrats and experts, men and women with respectable academic pedigrees, who operate through the instrumentalities of the administrative state rather than through Congress and other elected representatives. They see the Constitution and its constraints on the concentration of power as impediments to progress, and therefore deserving of the scrap heap: the Electoral College, the filibuster, the Second Amendment, the size and shape of the Supreme Court. They swoon at the idea of world citizenship and “global tests,” even as they fail to lift a finger to ensure the honesty of local elections; how they would police a global election remains unanswered, naturally. They are astonishingly blind to the desperate conditions that globalization has wrought across large swaths of the country, the places where the new peasantry has arisen, places where the economically and culturally displaced may be beginning to sharpen their pitchforks.

Hanson lays out this grim diagnosis with his usual clarity and brilliance, moving easily from his deep specialized knowledge of the ancient Greek and Roman world through savvy observations about present-day politics and American society, with its perfervid obsessions with race and its alarming willingness to abridge fundamental civil rights, including rights of speech and expression that have always been considered fundamental to the exercise of citizenship. The specter of China—and the implications of its commercial domination of the United States—is also a presence in this book. One of Hanson’s most chilling observations, made several times in the text, is that “what began as an Americanization of the globe has ended up as a globalization of America,” a steady devaluation of the referents of citizenship that are uniquely American: “the Gettysburg Address, the speeches of Martin Luther King, rock, jazz, and iconic Hollywood films.” Such cultural referents are among the things that made the melting pot work. Without them, it is no longer clear what one would assimilate oneself into.

But Hanson is not all gloom. He believes that the Trump administration, although imperfect in many ways, and engulfed by endless lawsuits and investigations, provided a glimmer of hope that the administrative state could be countered, the economy freed, civil liberties restored, and citizenship revitalized. Perhaps, he speculates, a less polarizing figure than Trump could accomplish more, particularly with a greatly energized American citizenry behind him. If Hanson is right, that energized citizenry might, in itself, lead the way to the policy changes that we so badly need. There are a great many restless people out there who are tired of waiting for Godot. The citizen is not dead, not yet.

1The Dying Citizen: How Progressive Elites, Tribalism, and Globalization Are Destroying the Idea of America, by Victor Davis Hanson; Basic Books, 432 pages, $30.

Wilfred M. McClay is a professor of history at Hillsdale College and the author, most recently, of Land of Hope: An Invitation to the Great American Story (Encounter). 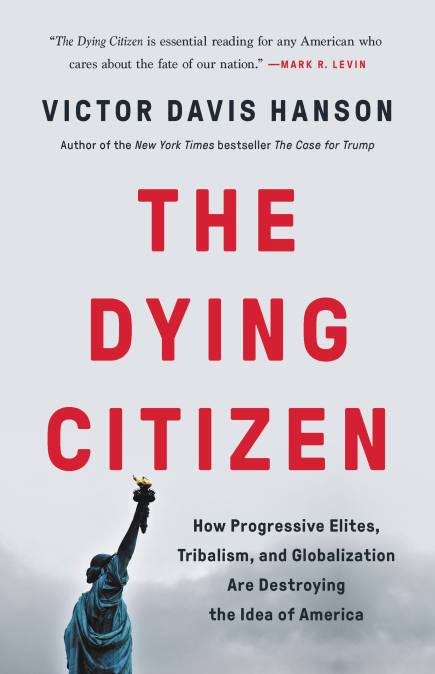 The Dying Citizen: How Progressive Elites, Tribalism, and Globalization Are Destroying the Idea of America

I When there were giants: three great classicists by Victor Davis Hanson

II A popular form of monomania by Anthony Daniels

A voice for the voiceless

In defense of loyalty