“Massive retaliation”: the only answer

Attentive readers will recall our comments on “offense archaeology” in this space in our December 2018 issue. This new discipline, conducted not only in academic institutions but also in the media—so-called “social media” and the other kind—picks a politically suspect figure and then trawls through his work for expressions of impermissible attitudes and heterodox opinions. The results of this literary archaeology are then disseminated in tones of manufactured moral outrage in an effort to destroy the career, or otherwise harm, the object of the campaign.

Among the instances we mentioned in December was the case of the English philosopher Sir Roger Scruton, probably the most wide-ranging and important public intellectual in the Anglophone world today. He is the author of over fifty books, many works of philosophy and intellectual history but also fiction (see Daniel J. Mahoney’s review of his short stories later in the magazine), memoirs, and books on oenology, fox hunting, Islam, and other subjects. He has written several operas. He has taught at major universities in the United States and in England. In the 1980s, he worked to keep the flickering flame of freedom alive in Soviet-controlled Eastern Europe by helping to organize an underground network of academic dissidents, an activity for which he was arrested and deported from Czechoslovakia (as it then was) and later awarded the Czech Republic’s Medal of Merit (First Class) by President Václav Havel.

In other words, Sir Roger Scruton (he was knighted in 2016) is about as accomplished a public intellectual as it is possible to be. He is also an outspoken political conservative, a contingency that has long made him a target of leftist obloquy. When he was appointed last November by the Ministry of Housing, Communities and Local Government as the unpaid chairman of a new public body to champion “beautiful buildings,” the attacks from politically correct journalists and politicians came thick and fast. The offense archaeologists went to work excavating the extensive library of Sir Roger’s writings and public statements. “Nobody holding [the views that Scruton holds] has a place in modern democracy,” skirled one Labour MP. “The prime minister needs to finally show some leadership and sack Scruton with an investigation into how he was appointed in the first place.” Quoth another: “With every passing hour it becomes clear that Roger Scruton has a history of making offensive comments. It beggars belief that he passed a vetting process.”

In December, we noted, it was not yet clear whether the campaign against Sir Roger would succeed. It was vicious, but his response was as brilliant as it was amusing. First, he showed that two could play the game of pretending to be offended. “I have been offended and hurt,” he said in a public statement, “by suggestions I am anti-Semitic or in any way ‘Islamophobic.’ ”

Sir Roger’s second response was even more amusing. Rather than apologizing for his opinions, he reveled in them. He announced that he was compiling a publicly available compendium of potentially “offensive” things he has said or written over the years so that his inquisitors might savor the full spectrum of his offensiveness without undue labor. Noting that his opinions on topics as various as hunting, marriage, pop music, Israel, sex, gender, identity, and the nation state “diverge shockingly from those of The Guardian,” he helpfully culled offending snippets from his work to provide his critics with the necessary evidence of “criminal thinking” in easily digestible form.

We said at the time that by standing up for himself instead of apologizing, Sir Roger might succeed in embarrassing his tormentors. Whether he would be able also to disarm them, we noted, was less certain.

We now know the answer. It is No.

For several years, Sir Roger wrote an engaging column about wine for the left-leaning magazine the New Statesman. (Those columns formed the basis for his book I Drink Therefore I Am.) So when the magazine’s Deputy Editor George Eaton asked to interview him, Sir Roger did the collegial thing and agreed. Eaton proceeded to publish an interview that shockingly misrepresented what Scruton had said about Islam, George Soros, and the Chinese, ripping phrases out of context and distorting his meaning by tendentious editing. He then dribbled out bits from this farrago on social media, embellishing the lot with editorial comments about how “outrageous” Sir Roger’s opinions were.

Eaton said that he merely edited the quote “for reasons of space in the print edition.” The last word about that disingenuous gambit comes from our friend Titania McGrath (né Andrew Doyle), the Twitter sensation whom readers will remember from our April issue. Citing Sir Roger’s observation (from his book Modern Philosophy) that “A writer who says that there are no truths, or that all truth is ‘merely relative,’ is asking you not to believe him. So don’t,” McGrath comments:

If you delete 85 of the letters in this Roger Scruton quote and rearrange the remaining 11, he is actually saying “I love Hitler”.

I’m not misquoting. I’m just editing it for reasons of space.

Eaton’s disgusting attack worked. James Brokenshire, the spineless housing minister, immediately jettisoned Sir Roger from his honorary position. A spokeswoman for the pathetic government of Theresa May backed him up, describing Sir Roger’s comments as “deeply offensive and completely unacceptable.”

The New Statesman proceeded to do a little victory dance. Patrick Maguire, the magazine’s political correspondent, emitted a few crowing tweets and wrote a column justifying Scruton’s sacking. And the miserable wretch George Eaton celebrated by posting a picture of himself on Instagram swigging champagne from the bottle. The caption read: “The feeling when you get right-wing racist and homophobe Roger Scruton sacked as a Tory government adviser.” Eaton has since deleted the embarrassing, though character-revealing, post, but readers may see it in the online version of this column. 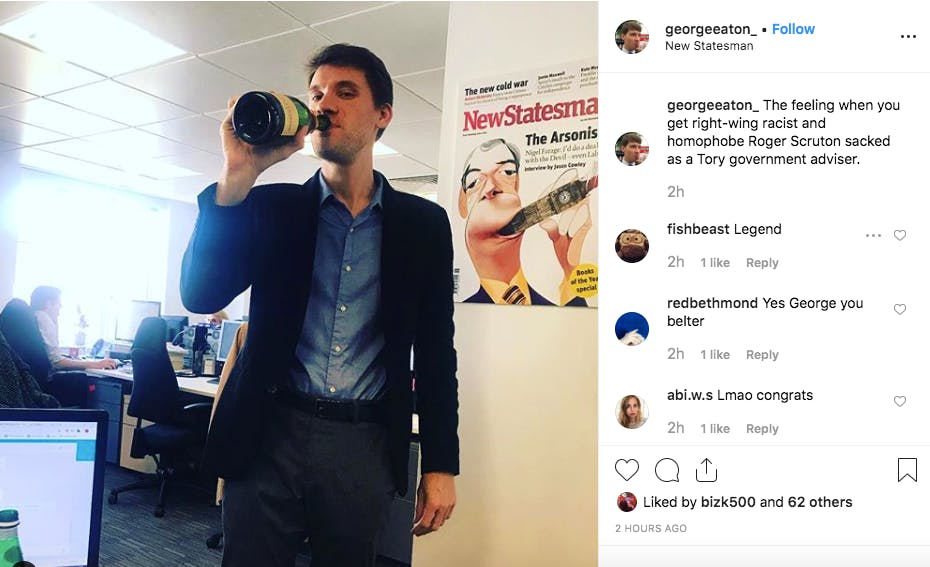 This sorry and despicable episode is full of lessons. Douglas Murray, in an excellent article for The Spectator, lays out what it says about the craven individuals who populate the Tory government. “[I]n nine years,” Murray asks, “what have the Conservatives managed? Nothing. Or almost nothing. They pat themselves on the back for their heroism in a single successful appointment, only then . . . to reverse and retreat when a left-wing magazine pumps inaccurate quotes onto social media.”

Roger Scruton himself, also writing in The Spectator, dilated on the implications of this gutter political ambush for British social life more generally. “We in Britain,” he notes,

are entering a dangerous social condition in which the direct expression of opinions that conflict—or merely seem to conflict—with a narrow set of orthodoxies is instantly punished by a band of self-appointed vigilantes. We are being cowed into abject conformity around a dubious set of official doctrines and told to adopt a world view that we cannot examine for fear of being publicly humiliated by the censors.

Indeed. Which is why we applaud the historian Niall Ferguson’s suggestion in The Times of London that the new vigilantes shutting down debate in the West are direct descendants of “the illiberal, egalitarian ideology that once suppressed free speech in eastern Europe.” “The lesson of the Cold War,” Ferguson writes, “is clear. From now on, an attack on one of us must be considered an attack on all of us. I therefore invite all who believe in the fundamental human freedoms to sign a new Non-conformist Academic Treaty.” Where do we sign? “The present danger to free thought and speech,” he continues, “is not Red Army tanks pouring through the Fulda Gap in Germany; it is the red army of mediocrities waging war on dissent within academia and the media. It is time to confront these people with the one thing that will deter them, as it once deterred the Soviets: massive retaliation.” Amen.

“Massive retaliation”: the only answer