Too cool in the capital by Bruce Cole 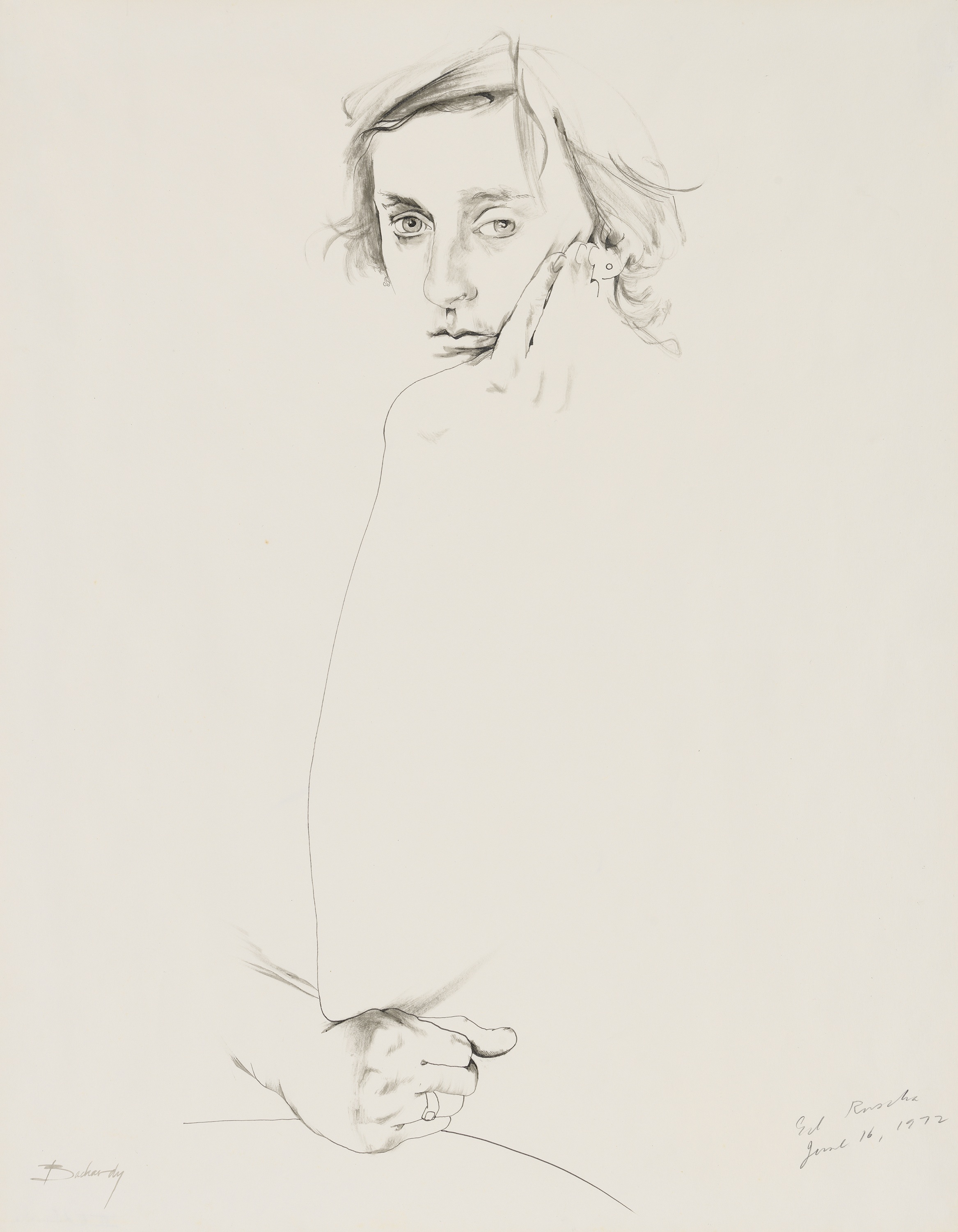 The introductory wall text for the â€œRecent Acquisitionsâ€1 exhibition at the Smithsonianâ€™s National Portrait Gallery (NPG) states its acquisition policy:

Each portrait that becomes part of the Portrait Galleryâ€™s permanent collection is approved by its Commission, which meets twice yearly. Of paramount concern is the sitterâ€™s impact on American history. The Commissioners then address issues such as the quality of the object or the significance of the image as it relates to the subjectâ€™s biography.

â€œImpact,â€ the key word here, is a very fuzzy standard for inclusion into our national portrait museum (note that â€œqualityâ€ is a secondary concern). This policy, unfortunately, permits the NPG to acquire portraits (sometimes of dubious quality) of people whose importance in American history is still very uncertain.

If the lasting importance of these sitters is dubious, itâ€™s even more so for Don Bachardy, whose self-portrait drawing was accepted by the museum as a gift from the artist and his dealer. This raises another troubling aspect of the NPGâ€™s acquisition policy: it permits a living artist to enshrine himself as an â€œimpactfulâ€ American, probably get a nice tax write-off, and boast that the prestigious NPG owns one of his works, an artistic trifecta.

Even the Smithsonianâ€™s staff is getting in on the act by contributing their own work to the museum. Last year, they produced a 3D-printed bust of President Obama that is now in the NPGâ€™s permanent collection.

The problem with all this is that the NPG has strayed from its earlier policy that specified that inclusion in the collection be reserved for â€œmen and women who have made significant contributions to the history, development, and culture of the people of the United States.â€ The anodyne â€œimpactfulâ€ has replaced this. Now the Commission has almost unrestricted latitude in its acquisitions. (Interestingly, the names of the Commissioners are not listed on the museumâ€™s website, but one assumes they are the directors of the NPG.)

Moreover, until 2006, no portrait could be displayed in the NPG until the sitter had been dead for at least ten years, which at least gave the museum a little breathing room to assess his or her importance. This was a wise policy. If still in place, it would have made impossible facetious, visitor-pandering exhibitions like the 2014 â€œAmerican Cool,â€ a deeply unserious effort starring Jay-Z, Johnny Depp, and Madonna. The forthcoming â€œEye Pop: The Celebrity Gazeâ€ promises even more of the same. Stay tuned. 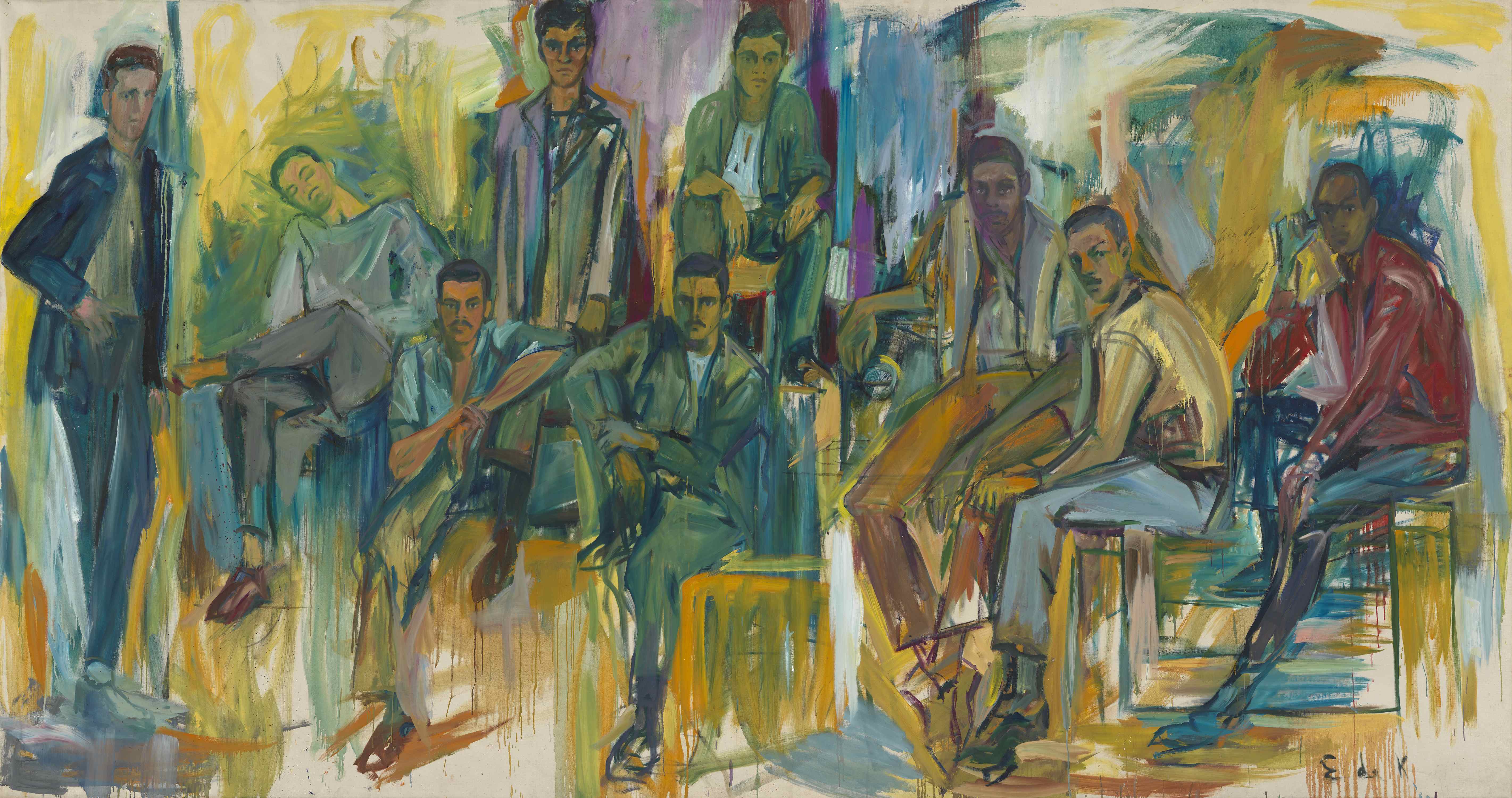 Fortunately, â€œElaine de Kooning: Portraitsâ€ proves that the NPG can put on first-rate shows when itâ€™s not desperately seeking hipness.2 Elaine de Kooning (1918â€“1989), although overshadowed by her famous painter husband, Willem de Kooning (whom she met in 1938 and married in 1943), was a respected and exhibited artist. She held her own in the drink- and testosterone-fueled art scene of mid-twentieth-century New York, but it was not until the 1960s that her portraits of President John Kennedy rocketed her to national fame.

That fame didnâ€™t last and today she is, unfortunately, an underrated artist. The exhibitionâ€™s goal is to resurrect interest in de Kooning. Putting this show together was no easy task because many of her paintings are not in museums, but owned by private collectors and dealers. The effort was worth it: â€œElaine de Kooning: Portraitsâ€ (accompanied by an informative catalogue) provides a fresh look at an artist of considerable talent and originality. She was also a critic whose writings for ARTnews (then edited by Thomas Hess, the subject of several portraits here) give valuable insights into the works of her contemporaries, and herself.

From the very beginning of her career, portraits infatuated her. Fledgling artists often paint themselves (theyâ€™re their keenest models), and de Kooning was no exception. Several early self-portraits show an emerging artistic personality. A small, pencil self-portrait reveals de Kooningâ€™s extraordinary draftsmanship, a skill seen in all her paintings, even the most abstract. The many preparatory drawings on display furnish enlightening insights into the geneses of the portraits, and reveal considerable ability to brilliantly sketch the essence of the face and body. 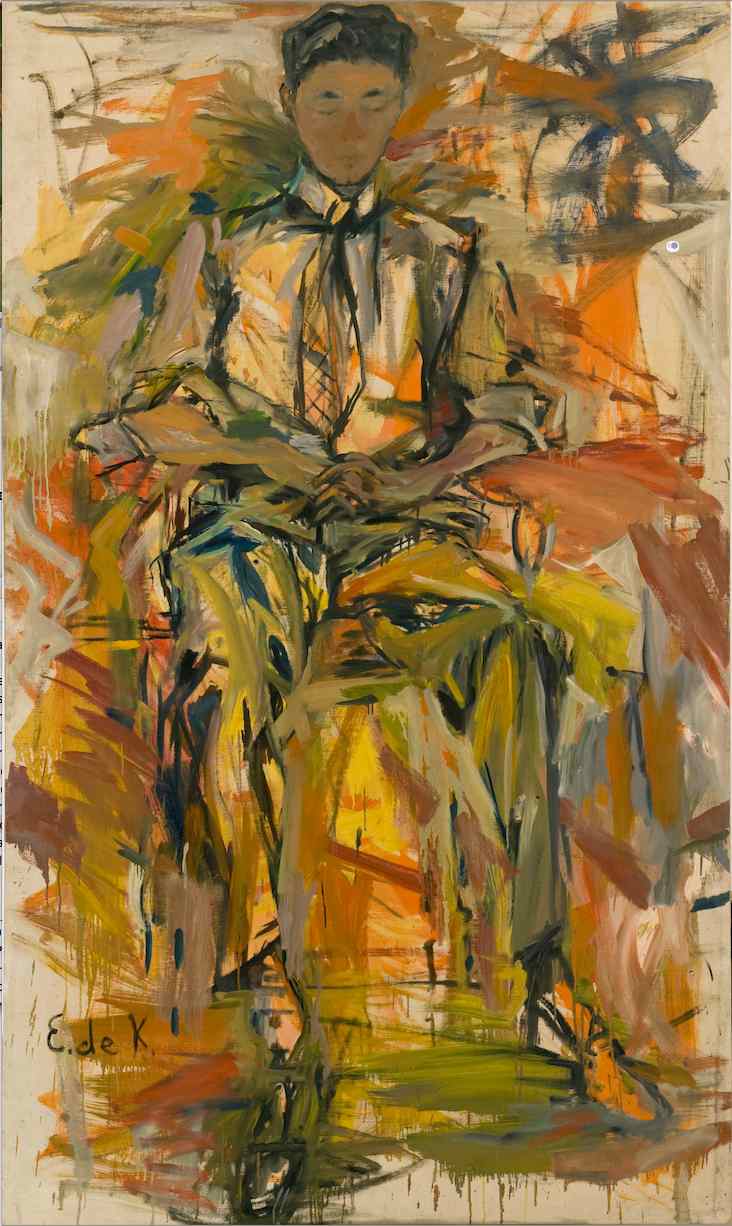 The realism of her first works soon faded as de Kooning fell increasingly under the spell of her husbandâ€™s more abstract paintings. In the full-length portrait of her brother, Conrad Fried (1954), the sitter is surrounded by a flurry of swilling gestural brushstrokes that dissolve the space around him and rival, rather than define, his form. But de Kooningâ€™s portraits always have a strong figurative element, and even in her most abstract work, the subject is easily recognizable.

As de Kooning gradually found her feet, her paintings became less abstract, better, sharper, and more perceptive. In the portrait of the critic Harold Rosenberg (looking very louche as he sprawls out of his chair across the picture, cigarette in one hand and beer can in the other), the brushstrokes now define space and volume. (Besides Rosenberg, the show is a Whoâ€™s Who of some of the movers and shakers of the New York art world: Leo Castelli, Alex Katz, Allen Ginsberg, and Robert De Niro, Sr.)

A life-sized preparatory drawing in charcoal and the finished oil portrait of Aladar Marberger are fascinating examples of the artist first capturing and then defining and developing space, character, and atmosphere. In the final version, Marberger glares at the viewer with a fierce intensity belied by the bright foliage picked out in beautifully painted, lightly-loaded brush strokes of green, brown, yellow, and coral; the originality of de Kooningâ€™s palette is quite remarkable.

This portrait is particularly poignant because both Marberger (de Kooningâ€™s former pupil and her dealer) and the artist were dying when it was painted. An instructive film loop in the gallery shows the articulate de Kooning painting the portrait while commenting on how she works.

The impact of many of the portraits is increased by their size. De Kooning liked to paint big. The monumental (88 x 166 inches) The Burghers of Amsterdam Avenue is a clever word- and paint-riff on the seventeenth-century Dutch group portrait. But many of de Kooningâ€™s subjects were in treatment for drug abuse, and their disorderly poses and attitudes are worlds apart from their archetypes. The Burghers, and almost all of the other paintings here, reveals de Kooningâ€™s debt to and reverence for grand manner European portrait painting from Titian to Degas. Itâ€™s clear that she knew much about the history of art and was eager to mine it for her work. Her portraits are, in many ways, quite conservative. 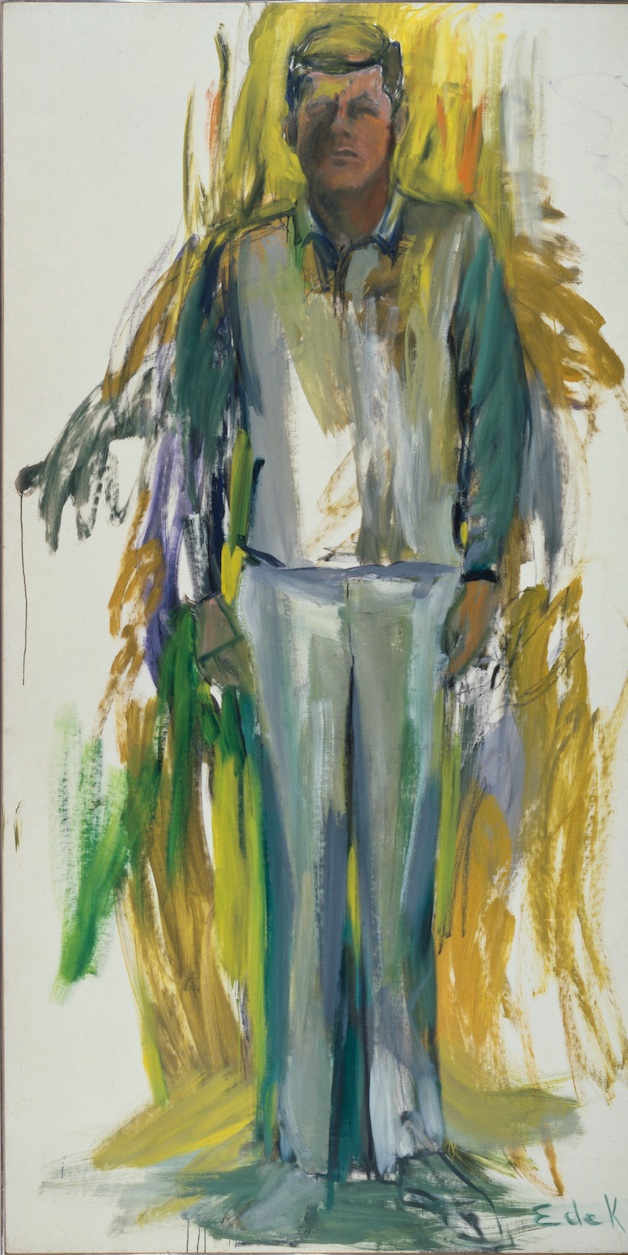 Another of these large paintings, and far and away de Kooningâ€™s most celebrated work, is the standing figure of President John F. Kennedy in the collection of the NPG. That de Kooning fell hard for the president is not in doubt. On meeting him in 1962, she gushed, â€œHe was incandescent, golden. And bigger than life.â€ After Kennedy was killed, she did not paint for a year.

De Kooningâ€™s first portrait of JFK (a gift from her New York dealer) is in the Harry S. Truman Presidential Library. Thereâ€™s a wonderful photo of the artist and the aged Truman standing next to the rapidly brushed, green, gray, and orange portrait. De Kooning looks pert and self-confident, Truman appears slightly perplexed, not surprising because he once said, â€œThere is no art at all in connection with the modernists, in my opinion.â€

Call it heresy, but to me the JFK portraits, and particularly the better-known one in the NPG, are the exhibitionâ€™s low points. Caricature-like and bland, they lack the keen insight and bite of the other portraits. In form they seem muddled and ambiguous. Perhaps because de Kooning never knew Kennedy as well as most of her other sitters and perhaps because she worshipped him, her vision was clouded in just this instance.

â€œElaine de Kooning: Portraitsâ€ has done a service by bringing her art back into the spotlight. Her portrait of JFK did not, as the director of the NPG claims, usher in â€œa new value system of changing art, politics, and gender roles.â€ That bit of hyperbole misses the point. De Kooning was a minor master (no shame in that), modest in her goals, and a portraitist of considerable talent. A retrospective sometimes disappoints. The quality of an artistâ€™s work can vary considerably over the long haul and the visitor may leave with a diminished view of the artist. This is not true of Elaine de Kooning, whose portraits never fail to please.

In the future the NPG would be wise to concentrate on such excellent exhibitions and leave the â€œcoolâ€ to Vogue and Us Weekly.

How do you kill a zombie? Itâ€™s been sixteen years since the Eisenhower Memorial was launched and not a spade of dirt has been turned on its four-acre site on the National Mall. In the last two years, Congress has refused to authorize taxpayer money to build Frank Gehryâ€™s megalomaniacal design featuring eight-story pillars, a vast woven steel tapestry festooned with nearly leafless trees, and a tiny statue of the young Eisenhower supposedly dreaming of his future.

The Memorial has a nine-member full-time staff including an executive director hired fifteen years ago and an architect (right: thereâ€™s another one besides Gehry), both making well over six figures. Nice work if you can get it.

Yet the sclerotic Eisenhower Memorial Commission (I am a dissenting member) lurches forward, impervious in the face of a gale of criticism.

Last month, the ninety-three-year-old Rocco Siciliano stepped down from the chairmanship and urged his fellow commissioners to replace him with Senator Pat Roberts of Kansas (the stateâ€™s other senator, Jerry Moran, quit the commission last year, as did Senator Jack Reed of Rhode Island).

The seventy-nine-year-old Roberts, a diehard Gehry devotee, was duly crowned and immediately issued a full-throated war cry. Quoting from Ikeâ€™s D-Day message to his armies, Roberts proclaimed, â€œGeneral Eisenhower told the troops before they stormed the beaches of Normandy, â€˜Your task will not be easy,â€™ but he also said, â€˜We will accept nothing less than full victory.â€™ â€

One might ask if Roberts sees the Eisenhower family, who oppose the Gehry design, and the legions of serious opponents as Nazis or merely as enemies to be vanquished. This is the sort of my-way-or-the highway attitude that has been a hallmark of the commission since its inception.

Recently, the take-no-prisoners Roberts was embarrassed when, during a committee hearing, his cellphone rang out with Elsaâ€™s plaintive song â€œLet It Goâ€ from the hit Disney movie Frozen. Maybe the senator should follow her advice.

Regardless, the fate of the Eisenhower Memorial now hinges on the 2016 budget. The commission has asked Congress for $68 million more for construction and a doubling of operating expenses so the staff may continue to occupy their K Street offices. Again, stay tuned.

1 â€œRecent Acquisitionsâ€ opened at The National Portrait Gallery, Washington, D.C., on November 7, 2014 and remains on view through November 1, 2015.

Too cool in the capital by Bruce Cole