Trudeau’s pick of the litter 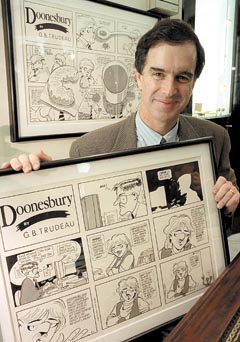 As we write, just three months have passed since Saïd Kouachi and his brother Chérif marched into the offices of the scabrous satirical magazine Charlie Hebdo in Paris and gunned down some twenty people, killing eleven. Two days later, Amedy Coulibaly, a close friend of the Kouachis, traipsed into a kosher supermarket, slaughtered four customers, and took another fifteen hostage. Contrary to a popular establishment narrative, these acts of barbaric savagery were not “random.” The writers and cartoonists at Charlie Hebdo were murdered in cold blood because they had caricatured a seventh-century religious figure. The people in the kosher supermarket were murdered because they were Jewish.

In February in this space, we had occasion to reflect on one popular reaction to the Paris murders among certain Western beneficiaries of civil liberty. It boils down to this: they’re in favor of free speech—but not free speech they or their ideological clients find offensive. One example we quoted came from a feminist commentator named Tanya Cohen. “I am a strong believer in the unalienable right to freedom of speech,” she wrote at a website called thoughtcatalog.com. Doubtless it made her feel good to write that. She probably felt even better when she listed some of those things she regarded as unalienable rights—“pro-LGBT speech in Russia,” for example. The best came last: “But we must never confuse hate speech with freedom of speech.” “Hate speech”? Cohen explained: speech that “offends or insults in general, along with speech that voices approval of anti-democratic, anti-freedom, and/or totalitarian ideologies and propaganda for war.” In other words, Tanya Cohen, like so many of her privileged Western confrères, is in favor of free speech just so long as it is not free. She is all for free speech that endorses ideas and movements she likes. It’s only the speech that takes issue with all those beautiful ideas and movements that she would ban.

And ban them she would. The United States, she wrote, needs to “get tough on hate speech through the law”—through the law, mind you. “Anyone guilty of hate speech—which should carry criminal penalties of twenty-five years to life—should be sent to special prisons designed to re-educate them and to instill values of tolerance, freedom, democracy, and human rights in them.” In one sense, Tanya Cohen is the Miss Prism of the totalitarian left:

MISS PRISM: What a lesson for him! I trust he will profit by it.

We mention Ms. Cohen not because she is influential but because her attitudes are so typical of a certain cohort of privileged illiberal liberals. We employ the term “privileged” advisedly. As you have doubtless noticed, “privilege” has lately been upgraded to an all-purpose negative epithet. All right-thinking (i.e., left-leaning) people have been “against privilege” at least since the unpleasantness in and around Paris circa 1789. But lately “privilege” has acquired a more ominous significance. These days, not only are we supposed to be against privilege, we must also treat it like oil in an automobile: as something that needs to be checked and replaced at regular intervals.

Not all privilege, of course, or rather not everyone is subject to the same strictures against maintaining and enjoying the privileges he has inherited, acquired, or earned. The old law that Quod licet Jovi, non licet bovi—what’s permitted to Jove is not permitted to an ox—still applies, but one must deploy special, politically correct antennae to understand who belongs to the party of Jove and who to the ordinary beasts. As an illustration, consider what would happen to most people if they told the IRS they had lost two years of possibly incriminating emails or if they told a Congressional inquiry that they had been using a private email server for government business and, no, they couldn’t produce those 30,000 emails because they’d been deleted.

Privilege is alive and well in twenty-first-century America, you just need to know how to identify its native habitat. Which brings us to the cartoonist Garry Trudeau and his response to the Charlie Hebdo massacre. The creator of the Doonesbury comic strip, recipient of numerous honorary degrees and awards, including a Pulitzer Prize, Garry Trudeau is indisputably a member of the party of Jove. So when he trundled along to Long Island University last month to pick up yet another feather for his cap—the George Polk Career Award to honor special achievement in journalism—it was just business as usual. What made the incident noteworthy was Mr. Trudeau’s acceptance speech “The Abuse of Satire,” which was reprinted in The Atlantic.

It’s a short speech but, considered as a sociological datum, quite remarkable. Mr. Trudeau, now sixty-six, notes that he has been bringing Doonesbury to a grateful world since he was a Junior in college and an editor tapped him to contribute his brand of “cartoon vérité, dispatches from the front, raw and subversive.”

“Raw and subversive”: we’re supposed to purr in admiration of that, and Mr. Trudeau goes on to note that in the early days (and sometimes even later) “the strip was forever being banned.” The culprit was “the stuffy, out-of-touch owner/publisher.” That gent shortly moved on, as did many other elderly obstacles to the Gospel According to Doonesbury, leaving Mr. Trudeau the beneficiary of nature’s inexorable “actuarial marketing strategy.” Reflecting on those early brushes with prohibition, Mr. Trudeau has this to say: “My years in college had given me the completely false impression that there were no constraints, that it was safe for an artist to comment on volatile cultural and political issues in public. In college, there’s no down side. In the real world, there is, but . . . you don’t notice it at first.”

Where has Mr. Trudeau been all of these years? Perhaps there was “no down side” to uttering “raw and subversive” things when he was in college—“Bliss was it in that dawn to be alive,” etc., etc.—but for many years now college campuses have been testing grounds for the sort of dystopian penal colony favored by people like Tanya Cohen. Utter a word that can be construed as offensive by any of a dozen or more approved victim groups and prepare to be accused of “microaggression” and sent away for conscious-raising classes if you are not suspended or expelled. Today, and for some years since, American college campuses are the closest thing to one-party states outside the precincts of Pyongyang.

But if Mr. Trudeau is out of touch with the mores of contemporary academia, he is very up-to-date when it comes to the issue of free speech in the wider world. He begins by recalling the so-called “Danish cartoons,” the caricatures of Muhammad that the Danish paper Jyllands-Posten published a decade ago. You know what happened then: members of “the religion of peace” rioted in various spots around the world, set fire to sundry Danish embassies, and deposited a trail of murder and mayhem that ultimately left some 200 people dead. This, according to Mr. Trudeau, was “a bitter harvest.”

“Bitter” it surely was, but who was to blame? The author of all those cosily “raw and subversive” Doonesbury cartoons, which have courageously guyed Republicans from Richard Nixon to Texas anti-abortionists to the delight of his ivy-educated audience: he thinks the blame lies with the cartoonists, not the “non-privileged” Muslim arsonists and murderers. “Traditionally,” he writes, “satire has comforted the afflicted while afflicting the comfortable.”

Satire punches up, against authority of all kinds, the little guy against the powerful. Great French satirists like Molière and Daumier always punched up, holding up the self-satisfied and hypocritical to ridicule. Ridiculing the non-privileged is almost never funny—it’s just mean.

By punching downward, by attacking a powerless, disenfranchised minority with crude, vulgar drawings closer to graffiti than cartoons, Charlie wandered into the realm of hate speech.

So, the editors of Charlie Hebdo are to blame for their murder by Muslim fanatics, aka “a powerless, disenfranchised minority.” In this respect, Mr. Trudeau sounds a lot like Anjem Choudary, the London-based Muslim cleric who, in the wake of the Paris massacres, explained in a column for USA Today that 1) the concept of free speech is foreign to Islam and 2) “the potential consequences of insulting the Messenger Muhammad are known to Muslims and non-Muslims alike.” In other words, we told you we are murderous barbarians and if you say or do anything we don’t like we will kill you, and here you go drawing cartoons and insulting our seventh-century founder, so what do you expect? You draw a cartoon, we murder you. Got it? And it’s Charlie Hebdo that’s “punching downwards”?

Mr. Trudeau ends by assailing those he calls “free speech absolutists.” “At some point,” he writes, “free expression absolutism becomes childish and unserious. It becomes its own kind of fanaticism.” Perhaps. But the law has always drawn limits to free speech—you may not, for example, incite violence or shout “Fire!” in a crowded theater. But that is not the point. What this privileged author of “raw and subversive” “cartoon vérité ” fails to acknowledge is that the right of free speech includes the right to offend. “Hate speech”—that means “speech that I hate.” But that is exactly what free speech is all about. How could someone like Garry Trudeau not understand that? Yes, “freedom,” as Mr. Trudeau points out “should always be discussed within the context of responsibility.” But the salient feature of our time is a concerted assault on free speech, fueled partly by the timorous spirit of political correctness, partly by a newly militant spirit of theocratic intolerance. Our chief “responsibility,” if we care about political freedom, is to the vitality of free speech, which makes that liberty possible. As the commentator George Will observed recently “free speech has never been, in the history of our republic, more comprehensively, aggressively, and dangerously threatened than it is now. . . . [W]hat we have today is an attack on the very possibility of free speech. The belief is that the First Amendment is a mistake.”

The fact that an ostentatiously privileged beneficiary of that freedom should take a public stand against according such freedom to others might be described as ironical. We think “despicable” would be a more accurate designation. Garry Trudeau pretends to be celebrating the underdog. In fact, the dog he celebrates is himself.

Trudeau’s pick of the litter