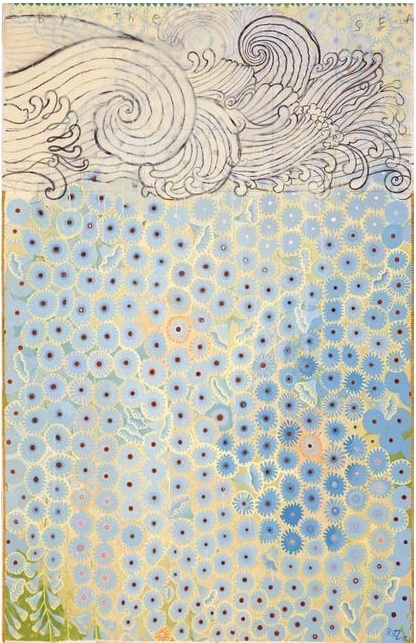 If the genealogy of modern art contains both dominant and recessive traits, the expression of the latter can be rare and rewarding. Such was the case for Pattern and Decoration, a movement of the 1970s. Against the predominant, reductivist urge of Minimalism and Pop, P&D looked to the broader traditions of ornament, craft, and cross-cultural motif. It also engaged the legacy of “women’s work” with an interest in textile, quilting, and other domestic arts.

The dynamic out of which P&D emerged shares much with our cultural landscape today. This goes to explain why we see many of our most enriching artists again exploring decorative themes. As Minimalism and Pop have merged into a hybrid, factory-made consumable to dominate the auctions and art fairs, an alternative, underground scene has developed around work that is often small, hand-made, and dedicated to a devotional and craft-like repetition.

Now on view at 1285 Avenue of the Americas Art Gallery, otherwise known as the lobby of the UBS building on 52nd and Sixth, the curator Jason Andrew of the Bushwick nonprofit Norte Maar has assembled thirty artists offering many of the best examples of these developments in “between a place and candy: new works in pattern + repetition + motif.”1

Andrew’s title comes from a sentence by Gertrude Stein: “In between a place and candy is a narrow foot-path that shows more mounting than anything, so much really that a calling meaning a bolster measured a whole thing with that.” In other words, pace Stein, don’t expect an easy explanation as to what this title means.

“Words to Stein were used like elements of collage,” Andrew said to me, “fragments of meaning that when pieced together sang songs, offered impressions, and relayed ideas. I am a huge fan of Stein’s poetry and relate much of my curatorial approach to her early modernist view—finding a theme and then selecting artists that drive the theme, enhanced by their diverse approaches.”

The title of this exhibition is a puzzle, which may just be the point. Repetition can be beautiful, but it can also be illogical, tedious, and obsessive. The representation of a single thing gives us an answer—a spot to focus on. The repetition of many things poses a question. Why so many when one will do? In this questioning, we may find the comfort of pattern. Lost in the beauty of repetition, we drop the urge to understand.

There is no set beginning or end to the UBS show, which has evolved from an exhibition Andrew put together a year ago at the Matteawan Gallery in Beacon, New York. You can enter from anywhere in the building’s lobby, and in fact the rows of walls in this modernist space add their own pattern to the program, which Andrew has considered as you look down one row to the next. And a word needs to be said about this building’s receptiveness to smart exhibition programing. Andrew’s exhibition “To be a Lady,” reviewed in this column in November 2012, took place here, and the building has a long history of artistic association through the UBS Art Collection. If every midtown office building gave their public space over to arts programing, such corporate “apartment galleries” could provide herd-immunity to the further spread of MOMA-nucleosis.

One place to start when entering the current show is Hanging Gardens Series (By the Sea) (2011–2). This eight-foot-tall gouache and colored pencil on paper by Robert Zakanitch, who was one of the leading artists of Pattern and Decoration, is a new, standout piece and a connection to that earlier movement. With its height, the large lower register is the first to come into focus—an assembly of red dots contained in pulsating blue bursts. Their arrangement has, one might say, an irregular regularity. Shapes are organic and aqueous. Some pick up a yellow halo. Others either turn into stalks of bluebell flowers or cover them over. Looking up, we see that the top of the work contains stylized white swirls. The all-over composition resembles a ceremonial illustration, but the reference is not immediately clear. Are those waves on top washing over blue sea-life, or clouds watering a flowery field? Are the blue shapes water droplets raining down from above, or flowers from below turning up? The exact meaning matters less than the comforting feel conveyed through the patterns.

Natural imagery, flowering patterns, and the channeling of traditional craft recur throughout the exhibition. In Medium (2015), Colin Thomson layers thick lines in meso-American forms. In Bacio (2015), Mary Judge references Renaissance tile-work in a pattern of circles and squares that becomes petals of blue and white shimmering between figure and ground. In Fly-by (1995–2015), Hermine Ford used oil on shaped panel to recall archeological fragments, in particular the pottery sherds and painted ceramics of Italy.

Textile work is also prevalent and often deployed in innovative ways, reflecting a renewed interest in the medium—or what the gallery Outlet Brooklyn recently called “loominosity.” Robin Kang, in Two Birds with Diamonds (2015), uses hand Jacquard-woven cotton and tinsel to illustrate the patterns of microchips and motherboards. John Silvis, in Crashcourse VI (2015), uses thread and felt to depict damaged cars. Tamara Gonzalez, in sleep beside me (2015), takes lace and other woven materials as spraypaint stencils. Samantha Bittman uses acrylic on handwoven textile to soften the black-and-white striped moire patterns of hard-edge optical art.

Repetitive, hard-edge abstractions are balanced against the feel of the hand-made. In Massai (P-158) (2012), Joan Witek uses black stripes of oil stick with pencil on white canvas to dazzling effect. The same goes for Libby Hartle, whose collage of graphite dashes on paper resembles the wood grain of a herringbone floor. With his crisscrossing lines, Rob de Oude looks to the shapes that emerge in the intersection of patterns. In her devotional small gouaches on wood panels, Lori Ellison finds the forms that emerge from a pattern’s hand-drawn idiosyncrasies.

Kerry Law, finally, has the last word on Pop seriality. In Empire State Building Series (2013–5), Law depicts the spire on the Empire State Building on foot-square canvases, just as he sees it in the distance on different evenings from his studio in Ridgewood, Queens. I was taken with this series when I caught it at Storefront Bushwick some years ago. The work references “Empire,” Warhol’s tedious eight-hour 1964 film of the building, as well as those ubiquitous silkscreens, but here the hand has been restored to the icon. Law finds infinite nuance in the scene’s changing light and atmosphere, which is often obscured by clouds, all perfectly rendered in the subtleties of paint. The series evokes the passage of time as well as the artist’s personal routine, a pattern of looking out the window every evening and capturing what he sees. 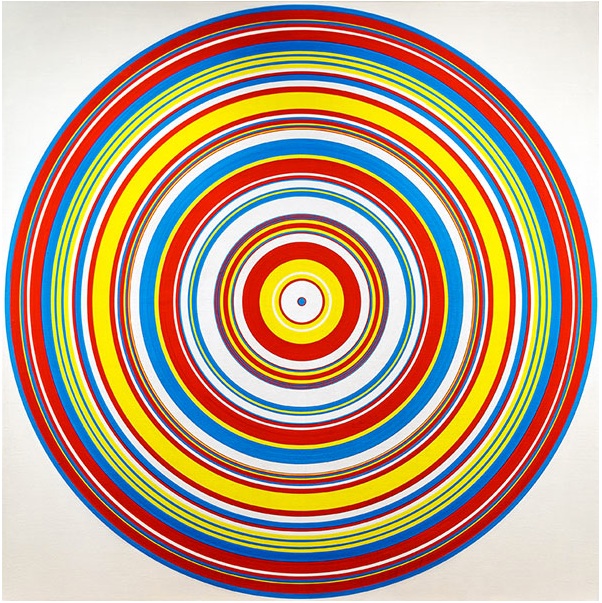 Nearby, in the Crown Building, D. Wigmore Fine Art has brought together a comprehensive survey of Tadasuke Kuwayama, the great artist of the circle known to us as Tadasky.2

Born in 1935 in Nagoya, Japan, the youngest of eleven children, Tadasky came to New York to paint some fifty years ago and has been at work ever since. As explained by Joe Houston in his informative catalogue essay, Tadasky’s father was a prominent builder of Shinto shrines, with designs that were marked by symmetry and spareness. When control of the company went to a sibling, Tadasky was free to explore painting, but he never diverged far from his devotional beginnings. His body of work consists almost exclusively of concentric circles composed in a square canvas, which he says he fully envisions in advance before putting oil to canvas.

To make his paintings, all by hand, Tadasky developed a turntable easel that allows him to sit above his compositions and brace his fine Japanese brushes as the canvases rotate beneath him. What’s remarkable is both the precision he can create through this system and the variation he can discover with his circular motif over time. Tadasky describes Josef Albers as an early influence, and it’s possible to see this body of work as one great homage to Homage to the Square, with equally rewarding results.

D. Wigmore has assembled examples of Tadasky’s evolving series through the decades, which he assigns with a letter followed by a number. While the B series from the early 1960s are regular rings of alternating color, the lines of the C series become more multifaceted. In the D series from the later 1960s, Tadasky reduces the color variation but introduces black lines of alternating thickness to produce a gradient, giving his rings a topographical curve. From the E series on, Tadasky has used sprays to produce even finer gradients and textures so his circles come to resemble spheres. Along the way his compositions have become increasingly celestial, so that M-282 (Black Center with White Rings) from 2006 resembles a blue star in eclipse or perhaps the iris of a divine eye.

Here, in Tadasky, we can see the results of a career devoted to a single motif. “I have learned that when you polish something over and over, it shines in its own way,” he recently explained in an interview with the online magazine Geoform. “You are creating your own world. For many years, I have polished the forms that I use to brilliance.”

In Hsiao’s Dual (2008), the action in this shaped canvas, something like a skewed lozenge, starts from points on either end. Sharp, symmetrical ripples of white, black, and silver lines radiate to one another, with extra patterns coming forward in the intersections. As they crash together, the effect speaks to the “breaking” of the exhibition’s title. Anoka Faruqee similarly runs a large-toothed trowel over sanded-down canvases to produce twisted taffy lines. Douglas Melini layers free-hand splatters of acrylic over taped patterns. Gabriele Evertz cuts the luminosity of metallic paint against the shifting values of her vertical and diagonal lines. Untitled (#98), the black and white enamel on aluminum by Michael Scott, carries this breakage the furthest. Using tape with a thinned black medium on a bright white polished surface, Scott lets his moire lines seep and run like an Op Art ruin. Even the recent history of modern art has now entered the pattern book, open for artists to copy and repeat in new ways.

3 “Breaking Pattern” opened at Minus Space, Brooklyn, on February 28 and remains on view through April 18, 2015.

IV “But today the struggle”: Spain & the intellectuals by Ron Radosh