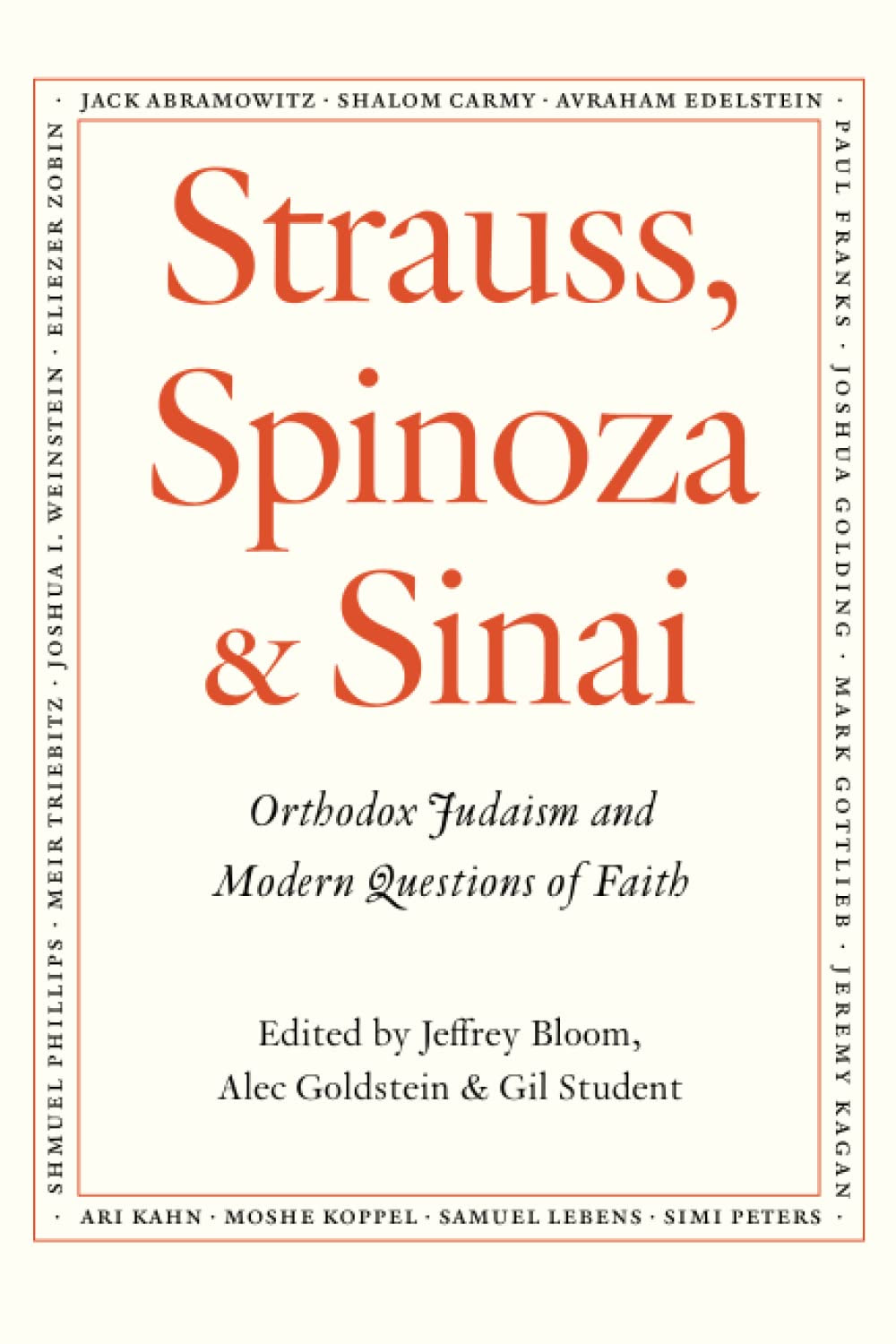 Strauss, Spinoza & Sinai: Orthodox Judaism and Modern Questions of Faith, edited by Jeffrey Bloom, Alec Goldstein & Gil Student (Kodesh Press): In the 1965 preface to his book Spinoza’s Critique of Religion, the political philosopher Leo Strauss makes the striking statement that “From every point of view it looks as if the Jewish people were the chosen people in the sense, at least, that the Jewish problem is the most manifest symbol of the human problem as a social or political problem.” For Strauss, this fundamental “human problem” devolves upon our ability to reconcile reason with revelation, the universal with the particular, and, as the volume editor Jeffrey Bloom notes in his preface to Strauss, Spinoza & Sinai, claims of “belief” with those of “knowledge.” But even here Strauss may be loading the dice: though he was no fan of modern philosophy, in trying to carve out a space for Orthodox Jewish “belief” he is, like Dante’s Virgil, preaching what he did not practice. (Strauss’s upbringing was Jewish, but he left the faith by adulthood.) So Bloom, along with his fellow editors Alec Goldstein and Gil Student, posed Strauss’s faith–belief dilemma to a number of Orthodox Jewish scholars and assembled their responses in the present volume. These thoughtful essays perform a great service for gentiles and Jews alike by examining that dilemma under a different, timeless light. —RE 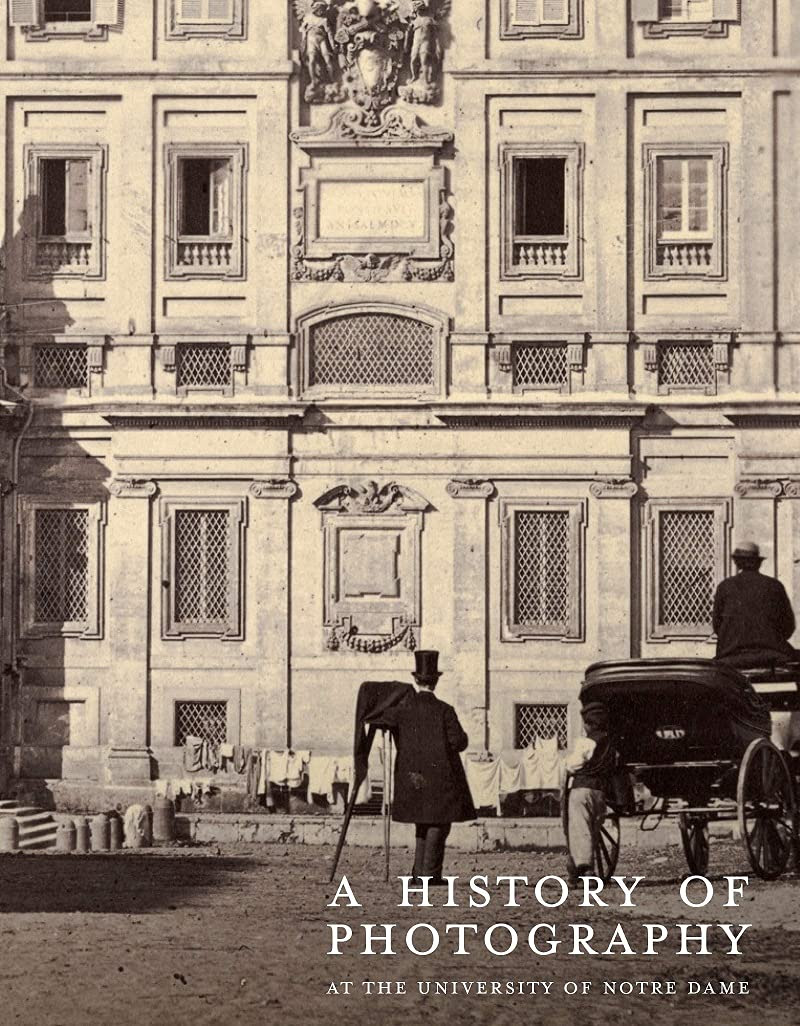 A History of Photography at the University of Notre Dame, Nineteenth Century, by David Acton (D Giles Limited): So extensive is the collection of photography at the University of Notre Dame—more than eleven thousand works—that a catalogue of its holdings can justifiably be called “A History of Photography.” Janos Scholz, a Hungarian-born cellist and an avid collector of historical photographs, seeded this school’s portfolio with a substantial bequest in the 1980s and ’90s—what the university museum’s director, Joseph Antenucci Becherer, has called “one of the most inspiring periods of benefaction in the University’s history.” In the years since, these gifts have been supplemented under David Acton, the university’s curator of photography. His scholarship now informs this 464-page reference book, produced in association with D Giles Limited, that focuses on one hundred works from its nineteenth-century holdings—in a companion to his history of twentieth-century photography produced in 2019. —JP

“Mendelssohn’s ‘Italian’ Symphony,” played by the Orchestra of St. Luke’s at Stern Auditorium, Carnegie Hall (May 5): There have been few composers as dedicated to the task of musical preservation and scholarship as Felix Mendelssohn (1809–47). Beside his music, wonderful in its own right, Mendelssohn’s tireless efforts to reintroduce the music of J. S. Bach in the early 1800s can stand as the other crowning glory of his career. For a few generations before Felix’s birth, the Mendelssohns knew the Bach family and participated in the small cult of Bach devotees that centered around Berlin’s Singakademie, a society for sacred choral music. Mendelssohn was a teenager when he first looked upon a family copy of the St. Matthew Passion; at just twenty, he mounted a triumphant performance of the oratorio for the public, the first in over a century, sparking a revival that has not ceased to this day. The Orchestra of St. Luke’s will present a concert at Carnegie Hall this Thursday featuring music from Bach—the inimitable cantata Ich habe genug(BWV 82)—and the Italian Symphony and violin concerto of his most resolute advocate. —IS

“A Reliquary for William Blake” by Will Ayton, played by the Parthenia Viol Consort with Cody Bowers at the Church of Saint Luke in the Fields (May 6): The term viola da gamba refers to a family of string instruments held upright on the leg, or between the legs, and played with a bow. Frequently used in music from the Renaissance to the Baroque period, it has in recent years gained a heap of contemporary additions to the repertoire thanks to the early music quartet Parthenia Viol Consort, which regularly commissions new music. This Friday, the ensemble will play Will Ayton’s otherworldly song cycle “A Reliquary for William Blake,” which the group recorded in 2007, featuring the countertenor Cody Bowers. In the program notes, Ayton writes that making new music for period instruments is like putting “new wine into old bottles”—learn more about the process in a pre-concert chat with the composer at Laughlin Hall in the Church of Saint Luke in the Fields in Greenwich Village. —JC