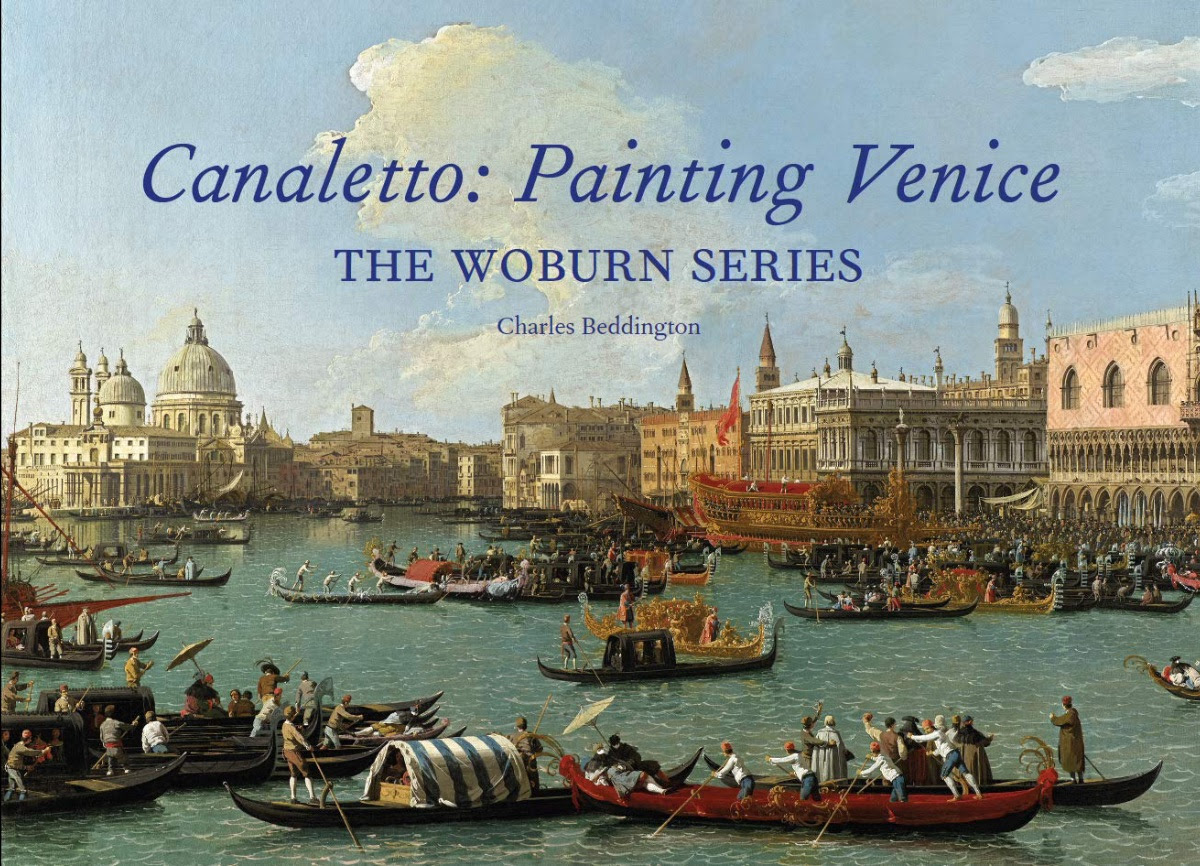 Canaletto: Painting Venice, the Woburn Series, by Charles Beddington (Pallas Athene): Canaletto became in the eighteenth century a sort of successor to the great French landscape artist Claude Lorrain. Such a comparison might seem facile, their styles being evidently dissimilar, but consider their favored status in England and the association becomes clearer. As the Claude scholar Martin Sonnabend posited, “it is no exaggeration to say that nearly all [Claude’s] paintings, drawings, and—to a lesser extent—prints have been in British collections at one time or another.” While not all Canaletto’s works ended up in Britain as a result of grand tourist travel on the Continent, a good many did, including twenty-four commissioned by the Duke of Bedford, which have resided in Woburn Abbey ever since their arrival on England’s shores. These are on display at the Holburne, in Bath, for a few more days, but those wishing for a permanent record of the series should seek out the show’s catalogue, with an introduction by Charles Beddington, available now. —BR

Cézanne in the Barnes Foundation, edited by Nancy Ireson, Sylvie Patry, and André Dombrowski (Rizzoli Electa): This summer, New Yorkers have been treated to the vast and exhilarating “Cézanne Drawing” exhibition at the Museum of Modern Art, which Karen Wilkin reviewed for our September issue. I’ve been four times, and this full-body baptism into the Provençal master’s works on paper has transformed my understanding of his overall achievement. Another way to get a comprehensive yet particular and almost unlikely sense of Cézanne is to visit the Barnes Foundation, which owns eight paper works but a full sixty-one oils on canvas. The eccentric Dr. Albert C. Barnes began collecting Cézannes in 1912, six years after the painter’s death, when his status was being cemented by the contemporary radicals openly celebrating him as the inspiration for their movement. But Barnes’s conception of Cézanne is somewhat different from that of your typical Art History 101 textbook. For one, in building and hanging his collection, Barnes quite explicitly set Cézanne’s renowned still lifes and bathers off against Renoirs of the same subjects, implying that the artists were commensurate progenitors to divergent streams of modernism. The Barnes is publishing an expansive study, beautifully illustrated, titled Cézanne in the Barnes Foundation, which provides contextual, formal, and detailed technical analysis of the works in its stewardship and is now available for pre-order. —AS

Mahler’s Symphony No. 2, “Resurrection,” The Metropolitan Opera Orchestra and Chorus, Damrosch Park (September 4–5): For sheer showmanship and grandeur in presentation, Gustav Mahler’s Symphony No. 2, the “Resurrection” (1895), is unrivaled in the symphonic repertoire. The gargantuan symphony, which typically requires about an hour and a half to perform, burgeons from a Sturm und Drang opening into a veritable heavenly oratorio in its finale as it expounds in musical terms Mahler’s personal philosophy of universal salvation and the afterlife. This Saturday and Sunday, the Metropolitan Opera Orchestra and Chorus under Yannick Nézet-Séguin will celebrate the opening of a new season with Mahler’s fin-de-siècle barnburner in two free outdoor concerts in Lincoln Center’s Damrosch Park. The first-time listener should take along a copy of Mahler’s program notesfor a guide and keep an ear open throughout for the dread tones of the Dies irae, as well as Mahler’s moving inversion of that ominous motif as a message of hope in the finale. —IS

Peter Kayafas: Coney Island Waterdance, by Peter Kayafas (Purple Martin Press): One of New York’s more esteemed institutions is the Coney Island Polar Bear Club. Every Sunday from November through April, the group’s eccentric members take to the waters of the icy Atlantic for a social swim. While the New Year’s Day Plunge attracts the crowds, it is these closed weekend swims that maintain the traditions of a club founded in 1903. As a guest I have joined them on occasion for their invigorating afternoons, where the body’s reaction to ten to fifteen minutes of forty-degree water is first flight then fight. Over the course of the winter of 1990, the photographer Peter Kayafas remarkably managed to endure these sensations while documenting the club mid-dunk. Over the following two decades, the experience then brought him back to document Coney’s more numerous summer swimmers. A suite of these pictures spanning both seasons has now been collected in Peter Kayafas: Coney Island Waterdance, a new hardcover book featuring thirty duotone images and published by Purple Martin Press. On September 9 from 6:00 to 7:30 p.m., Kayafas will discuss the refreshing collection with Sasha Wolf at Rizzoli Bookstore in New York (free with pre-registration). —JP

“Music for a While #50: Pieces from all over.” Jay Nordlinger, The New Criterion’s music critic, talks music—but, more important, plays music.