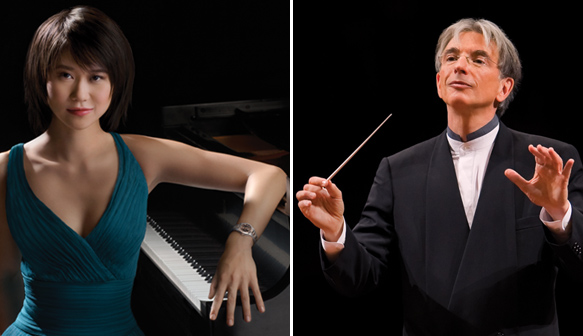 The London Symphony Orchestra played in Avery Fisher Hall last night, under the baton of an American maestro, Michael Tilson Thomas. He is popularly known as “MTT.” Last December, he marked his seventieth birthday.

First on the program last night were the Sea Interludes from Britten’s opera Peter Grimes. The LSO should play these pieces especially well, shouldn’t they? Not necessarily: nationality isn’t destiny, when it comes to musical performance. And much depends on the guy waving the stick.

There are four Sea Interludes: Dawn; Sunday Morning; Moonlight; and Storm. The first of them expresses tension within calm, or, if you like, a barely masked tension. MTT and the LSO caught this quality. The second interlude, however, was a little careful and unflowing, in my opinion. Then it was a bit loud and heavy.

By the way, the sound in Avery Fisher Hall is supposed to be bad—but it was excellent where I was sitting. Vivid. The phenomenon of acoustics is puzzling.

How was the third interlude, Moonlight? I believe it was slow and labored. But the last, Storm, had its tempestuous impact.

The mood changed with the next item on the program: Gershwin’s Concerto in F (for piano). The soloist was Yuja Wang, the Chinese-born sensation. She likes jazz, as evidenced by one of her regular encores, “Tea for Two,” in the arrangement of Art Tatum.

Miss Wang favors dresses that are barely dresses—that are more like bikinis with some extra fabric. Last night, she stepped out in a sexy, sheer number that was demure for her. Practically a burqa. In any case, she looked sensational.

At the beginning of the concerto, the orchestra was adequate but stiff. It would remain this way throughout the concerto. Wang, when she entered, was Debussyan, as she so often is (whatever the music). She demonstrated fluidity, as always. And her sound lacked heft—a recurring problem for her, especially in concertos. She can be kitten on the keys. Last night, one often saw her fingers move but did not hear the piano, through the orchestra.

MTT must bear some responsibility too, right? Does Gershwin?

In the first movement, soloist and conductor had some coordination problems, as they would later. These were not major. Wang did some rushing. This was not major, either.

At the end of the first movement, many in the audience applauded, as well they should: this ending is made for applause. A pianist should acknowledge it, even if she doesn’t rise and bow. Wang did not acknowledge it (and neither did Tilson Thomas, who should know better).

The slow movement, that ingenious thing? The orchestra was sleepy and cautious. There was an absence of heart in that band, and apparently on the podium. Wang did her best to liven things. In the finale, the orchestra could have been far more precise and exciting. MTT was curiously stolid. Wang, again, did her best. She was not stolid. She was idiomatic and attuned.

There would surely be an encore, and I thought it would be one of Gershwin’s three preludes, or maybe “Tea for Two.” Instead, a stagehand rushed out to place a “music desk” on the piano (the part that holds sheet music). Wang was going to play an encore she hadn’t memorized?

It turned out to be a piece by the conductor, You Come Here Often? He wrote it expressly for Wang. It is very familiar: a perpetual-motion jazzy number. There are many, many such pieces. We’re talking about a genre or type. MTT’s piece is pleasant, and Wang played it niftily. The composer listened thoughtfully in back of the orchestra.

And all honor to him for composing. That’s a musician, a rounded musician.

After intermission came a symphony, the Second of Sibelius. This is a strange work, as Sibelius symphonies tend to be. I often cite Harold Bloom, the literary critic. “Strange” is possibly his highest compliment. If a work is strange, it is original, individual—all its own.

Sibelius indeed composes in his own private Idaho. Who can figure him out, after all these years?

A performance of the Sibelius Second depends on intangibles: mystery, anticipation, nobility, transport. I did not find MTT’s performance satisfying. Competent? Professional? Yes, of course. I applauded like everyone else, and I applauded sincerely. But I could never quite get lost in Sibelius. The spell was not cast.

The LSO did some virtuosic playing and some sloppy playing (bad onsets and the like). In any event, they are an outstanding orchestra. Soon, they will have a new music director, Sir Simon Rattle. He will be more consistent than the current chief, Valery Gergiev. But will the highs be as high?

Listen, Gergiev is a wizard. Sometimes he has no magic. But when he does—holy Moses, look out.

1) For many years, I have been writing about sounds in concert halls. Not musical ones. I mean plastic bags, dropped canes, wayward hearing aids, etc. For a blogpost on all this, go here.

Last night, there was a sound I had never heard before. It was like a sustained bell or chime. A fellow critic thought it was a hearing aid. I’m not sure. It was a pity, in any case.

2) MTT is celebrating his seventieth birthday in a series of concerts, including last night’s, I guess. Odd though it may seem, I still think of him as a whippersnapper and Bernstein protégé. I well remember Bernstein’s seventieth-birthday concert, broadcast on national television. Many of us fell in love with a young soprano, Dawn Upshaw, who sang “I Hate Music.” And Christa Ludwig ventured into musical comedy (“I Am Easily Assimilated”).