Since Renaissance humanism first made it acceptable—even imperative—for artists to draw attention to themselves, creative types have complied and produced many forms of what curator James Clifton calls “ego-documents.” With the advent of the printing press, the engraving became one of the most prolific forms of the ego-document. And since most engravings are collaborations between the artist and the engraver, that’s two ego gratifications for the price of one. When printmakers began to reproduce paintings as prints, the effect was multiplied. Three exhibitions at the Fralin Museum of Art in Charlottesville, Virginia, describe not only the trajectory of printmaking history, but also the many ways in which an artist might document his ego.

Figures for the Soul, the exhibition consisting of a first rotation of fourteen pieces, covers the first generation of master engravers, whose work elevated printmaking to an art. Both Martin Schongauer and Albrecht Dürer were sons of goldsmiths, who transposed decorative techniques into engravings of such imaginative power that they came to rival paintings. As shown by two examples from his Large Passion series: The Flagellation of Christ (c.1496–1497) and Christ’sDescent Into Limbo (1510), Dürer was unmatched when it came to woodcut engraving. In the former, the taunts endured by the stoical Christ, his classicized figure clearly influenced by the artist’s trips to Rome, seem almost audible. The latter depicts that mysterious interregnum between the Crucifixion and the Resurrection when Christ descended into hell and rescued the souls caught in limbo. Adam holds Christ’s cross unfazed by the fearsome demons roiling to his right. Dürer’s repeated use of archways and vaulting heightens the scene’s anxious and claustrophobic nature. 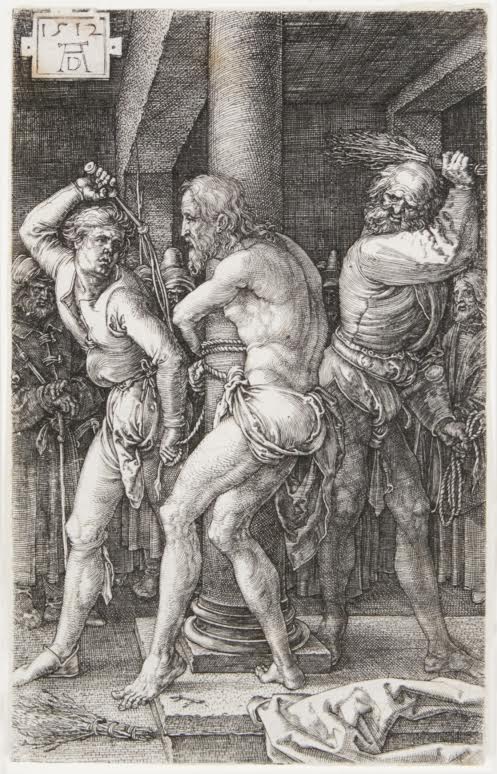 Portrait of the Artist, 1525-1825, reminds us that until the late Renaissance, portrait painting was an exception. However, Jacob Neeffs’s etching and engraving of Self-Portrait of Anthony van Dyck (c.1630/1645) depicts van Dyck’s head atop a lifeless pedestal, an uneasy mix of naturalism and memorializing. Van Dyck’s remarkable Pieter Bruegel the Younger (etching and engraving, c.1630) altered public perception by giving an artist whose work was considered rustic and coarse a patrician appearance. In his engraving of Pierre Mignard (1690–1700), Gérard Edelinck depicts Louis XIV’s premier peintre du roy as serene and unapproachable by using the oval frame and royal seal usually reserved for royalty and statesmen. Contrast this with William Hogarth’s Gulielmus Hogarth (etching and engraving, 1748/1749), also in an oval frame, but one interrupted by humanizing attributes like a palette (bearing Hogarth’s trademark “line of beauty”), an engraver’s burin, and a sensitive portrait of the artist’s pug dog, Trump.

Hogarth made his reputation as a satirist, but Goya raised the stakes with his Francisco Goya y Lucientes, Pintor (etching, aquatint, drypoint, and burin, 1799). With a withering gaze of contempt, Goya depicts himself as a gentleman and member of the very class so scathingly ridiculed in the prints known as Los Caprichos. As David Rosand notes, “Goya turned the inventive powers of the artist back upon his audience with indicting moral force. Pressing the limits of poetic license, he effectively annulled the contract between artist and society that had sustained the development of the capriccio.”

In the seventeenth century, printmakers frequently concentrated on images designed to burnish their social status. Against a background of the studio or the academy, artists could display their virtuosity by depicting vast scenes of multiple figures in various attitudes, showing their mastery of the latest technology and exalting the communion enjoyed by creative minds. This could take an allegorical form as in Sébastien Leclerc’s The Academy of Sciences and Fine Arts (engraving and etching, 1698) where art gains credibility by being skillfully integrated with science and the liberal arts.

Rembrandt and Adrien von Ostade preferred more intimate views of the artist at work, emphasizing the pragmatic concerns of an artist’s career. In his A Man Drawing From a Cast (etching, 1641) and The Goldsmith (etching, 1655), Rembrandt links apprenticeship and education with the divine gift of creativity. Van Ostade’s The Painter (etching, c.1647), possibly a self-portrait, makes the point that no matter how talented one may be, any twist of fate might relegate the artist to a broken easel, a tattered smock, and a few urchins mixing pigment underneath a grubby staircase. The sweetness of the rococo setting of Daniel Nikolaus Chodowiecki’s Cabinet d’un peintre (etching, 1771) is undercut by subtle clues illustrating the riskiness of a career in art. Seated near a window, Chodowiecki, a painter, printmaker, and art dealer, peers grimly over his spectacles at his wife and five children, recording the shabby scene and no doubt wishing that he could move some of the inventory clogging the room’s walls. 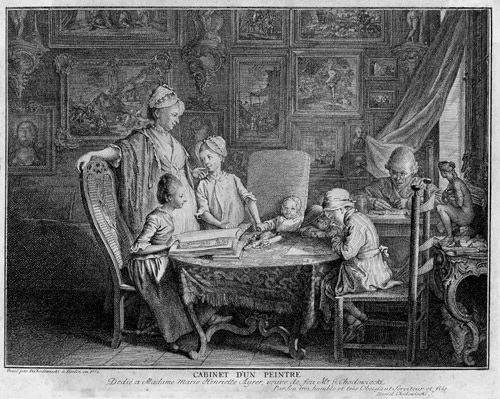 Some artists’ genius tended in other, less sobering, directions. The supremely talented Hendrick Goltzius was also something of a prankster, adept at engraving in the styles of Dürer and Lucas van Leyden and known to age these imitations artificially and pass them off as authentic works by the masters. One such “emulation” of Dürer is Goltzius’s The Circumcision from the Life of the Virgin (engraving, 1594), an accomplished scene of shocking realism, right down to the glittering blade and the squirming Christ child. Goltzius himself boldly gazes at the viewer over the shoulder of the rabbi holding Jesus.

Much of what is asserted by the earlier two exhibitions receives yet another interpretation when viewed in the context of a third exhibition, Lucian Freud: Etchings. Certain truths, however, remain: that every painter paints himself, that expressive forms of portraiture tend to be more psychologically astute, and that portraits conceal as much as they reveal. 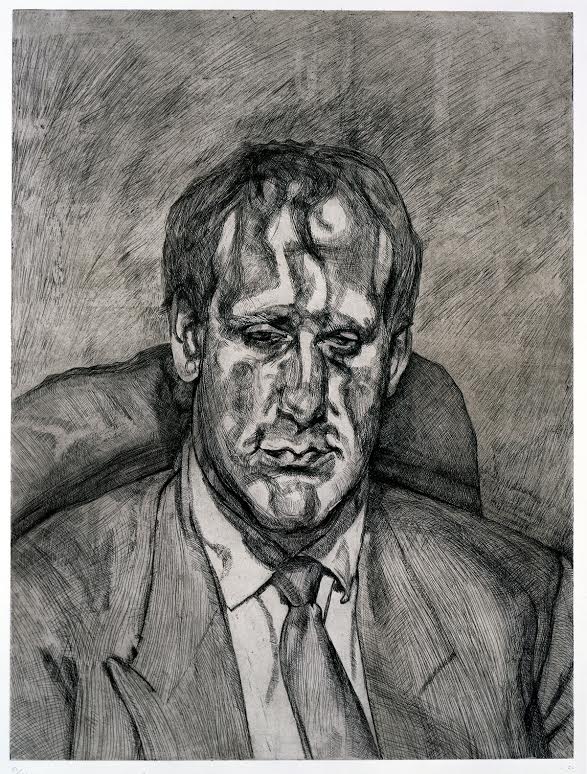 Although Freud first attempted etching in the 1940s, he quickly dropped the practice, returning only in the 1980s. The works on view here mark the first comprehensive exhibition of Freud’s etchings. As with his more well-known paintings, the etchings focus on the human body in various physical conditions. Unimpressed by classical beauty, Freud is more an heir to the representational naturalism of the Flemish artists of the Northern Renaissance, works like Ghirlandaio’s Portrait of an Old Man and His Grandson (1490) as well as the unflinching self-portraits of Rembrandt, Van Gogh, Toulouse-Lautrec, and many others.

Freud treated etching like drawing, propping a copper plate on an easel like a canvas and requiring his subjects to be present for multiple sittings. The developing relationship between Freud and his subjects was integral to the creative process. He expected his sitters to be as committed to the final product as he was. For example, Freud’s dealer William Acquavella relates a story about Freud working on a painting of Mick Jagger’s then-wife Jerry Hall nursing a baby. When Hall failed to show up for two sittings, Freud had his assistant, artist David Dawson, sit in her place and the painting went through a “sex change.” Jagger was furious but Freud refused to restore Jerry to the painting. (The final product, Large Interior, Notting Hill, does indeed show a nude Dawson with a baby at his breast.)

Freud’s sensuous paint handling translates well to the etching medium where he could more freely explore surface, texture, and line. His meticulous “naked portraits” of his whippet Pluto, or Big Sue, a heavy-set woman he met at a British unemployment office, or Leigh Bowery, a bald-headed performance artist, have an unexpected dynamism and immediacy. The etchings’ frenetic crosshatching and heavy lines cause light to play across the images in a manner that suggest movement and incipient change. This heightened effect of the artist’s hand seems to make the artist more present, fulfilling Freud’s claim that all his work was autobiographical.

What one critic referred to as Freud’s characteristic blend of “lyricism and repulsiveness” finds a more bracing expression in his etchings than in his paintings. Freed from the exigencies of that medium, Freud experiments more openly with scale and perspective. Rather than the pensive alienation of so many of his paintings, we sense in his etched portraits a lighter touch, almost a whimsical meditation on the varieties of human appearance.

“What do I ask of a painting? I ask it to astonish, disturb, seduce, convince.” What Lucian Freud expected of painting can also be expected of printmaking, an art form that is much more than a mere ego-document.

View Figures for the Soul (Rotation I), through April 12, 2015; A Portrait of the Artist, 1525–1825: Prints From the Collection of the Sarah Campbell Blaffer Foundation, through June 7, 2015; Lucian Freud: Etchings, through April 19, 2015, at the Fralin Museum of Art, University of Virginia, Charlottesville.