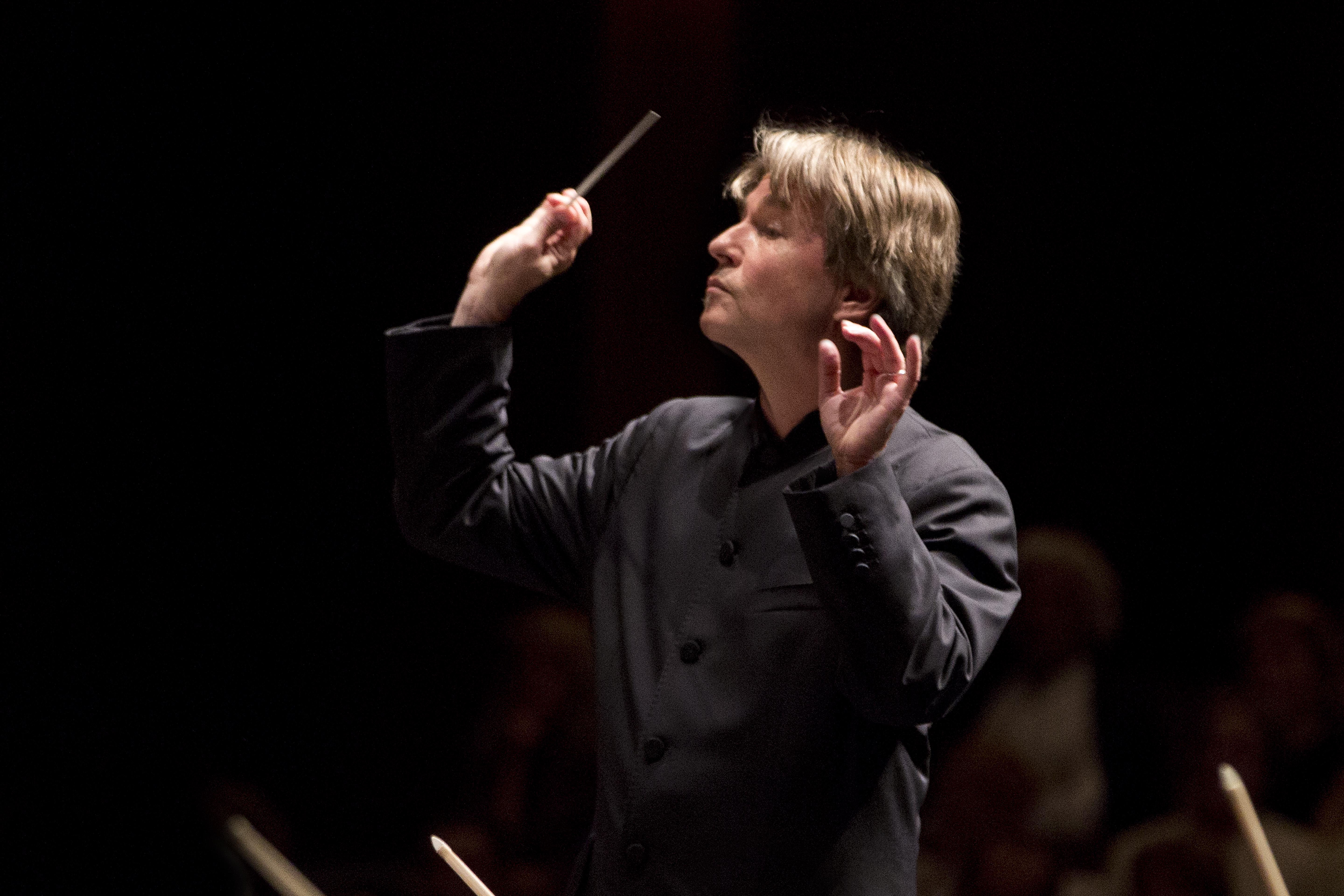 On Saturday morning, in the Great Festival Hall here at the Salzburg Festival, Esa-Pekka Salonen conducted the Philharmonia Orchestra. He is now the “principal conductor” of this London band. He first conducted them long ago—in 1983, when he was twenty-five. Salonen has one of the best “creation stories” in all of music. I love to tell it. I asked him to tell it in a public interview a few years ago. Later, I wrote it up like this:

In 1983, Michael Tilson Thomas was scheduled to conduct the Philharmonia Orchestra. He injured himself playing tennis. Orchestra management had to scramble to find a substitute. They reached the bottom of the barrel: Salonen, a young, unknown conductor in Finland. Salonen’s manager gave him a call, at 7:30 in the morning. Salonen was none too pleased; he had been up late with his mates.

The manager spent half his time working in music and half his time selling golf equipment. He had his office at a golf course in western Finland. That’s where the faxes came in, regarding his musical clients, including Salonen.

He said to Salonen, “The Philharmonia wants you to conduct Mahler’s Third Symphony three days from now.” Salonen said, in essence, “You’re joking.” Salonen didn’t know this symphony. He hadn’t heard it, hadn’t seen it. He said, “Well, let me go to the library and have a look.” He learned the score. And he conducted the Philharmonia.

Recognize, please, that the Mahler Third is not an ordinary piece of music—it is not “Twinkle, Twinkle.” It is one of the strangest, most profound, most important symphonies in the entire literature. It is also “the longest,” says Salonen.

After the Philharmonia concert, a man approached him and said, “I’m Ernest Fleischmann, the executive director of the Los Angeles Philharmonic. I think you should be our next music director.” Salonen thought this man was a crackpot, practically a street person. He later learned that there was indeed a man named Ernest Fleischmann, and that he was indeed the executive director of the L.A. Philharmonic.

Following this London triumph of Salonen’s, the faxes started to pour into that golf course in Finland: Salonen was known and in demand.

Today, Salonen looks pretty much as he always has. He seems to weigh not an ounce more or to have a hair fewer. He began the Philharmonia concert on Saturday morning with Don Quixote of Richard Strauss. (By the way, I have always considered 11 o’clock a most civilized hour for music.) The Salzburg Festival is celebrating the 150th anniversary of Strauss’s birth. He is, in fact, a founding father of the festival.

Is it just me, or is it raining Don Quixote? At the Lincoln Center Festival last month, Bolshoi forces performed the ballet. I wrote about it here. In writing that original novel, Cervantes fired imaginations for centuries to come.

The cello soloist with Salonen and the Philharmonia was a young German named Maximilian Hornung. I had never heard of him. For me, he is a discovery. Hornung played with great poise, a beautiful sound, and a sense of drama. Don Quixote, from his bow, was touchingly noble (as distinct from pathetic or comical). The violist was a Briton named Lawrence Power. He, too, acquitted himself well (in a much smaller role).

In addition to these starring, or semi-starring, roles, there are opportunities in Don Quixote for principals throughout the orchestra. The Philharmonia’s were notably good. Let me mention two, though not by name (for I don’t know them): the oboe and the French horn. Let me further mention that the principal horn was a pretty young woman.

I realize I shouldn’t talk this way. But maybe you’ll excuse me on these grounds: When I was growing up, you didn’t see a woman in a horn section. Young or old, homely or otherwise. Paunchy men were the rule.

Don Quixote is a busy piece, telling a busy story, and there is a great variety of sounds. In the midst of it all, a cellphone went off—having the ring that goes “boing-boing-boing,” like something jumping. It almost fit in with the tone poem.

You may know the rap against Esa-Pekka Salonen: cold, hard, and fast. I have rapped this rap many times myself. Salonen has often conducted with his fist clenched (not literally). In recent years, however, I have sensed that he is unclenching his fist.

His Don Quixote was plenty disciplined. There was no dawdling. Salonen was utterly logical and utterly clear: You could have written the score down from his conducting. But he also showed Romantic flair. The score was panoramic and kaleidoscopic. This was Don Quixote in full, I think.

I’d like to make a confession: I’ve never much liked Don Quixote (Straussoholic though I am). Salonen made me like and appreciate it much more. He took no bows at the end, deferring to the two soloists, some principals in the orchestra, and the orchestra at large. But it was he (along with Strauss) who made Don Quixote so vivid and satisfying.

After intermission, he conducted Berg’s Three Orchestral Pieces, Op. 6. They were logical and disciplined, yes, but they were also poetic. Very much so. The Prelude was dreamily beautiful. Is Berg supposed to be so beautiful? Yes, actually. The concluding March started whimsically martial; then it was martial-martial. It was a shame the final note was not together—otherwise, the three pieces were immaculate, as well as smart and moving.

The program ended with a Ravel hit, La valse. When it began, the piece was appropriately woozy. Salonen proved patient, letting the piece build. It has an arc, and a conductor must follow it. In this performance, the music was half Viennese, half French—just what it should be. When all was said and done, it was delicious, strange, and exciting.

Is it possible to hear this piece again, after a hundred hearings? Conducted and played like this, absolutely.

You knew there would be an encore because, as the audience applauded, a woman sneaked out from the wings to a waiting celesta. (I think it was a celesta. It was a keyboard instrument, in any case.) What the Philharmonia played was a selection from Ravel’s Mother Goose: “The Fairy Garden.” Rather like La valse, it built patiently, beautifully, and excitingly. You could have floated out of the Great Festival Hall and above the Alps.

This was a great concert—and I don’t say “great” casually. Furthermore, Esa-Pekka Salonen has become one of the conductors I most esteem. There are few I would rather see on a podium. It was not always thus. Who changed, him or me? I vote him, but I can’t be 100 percent sure.