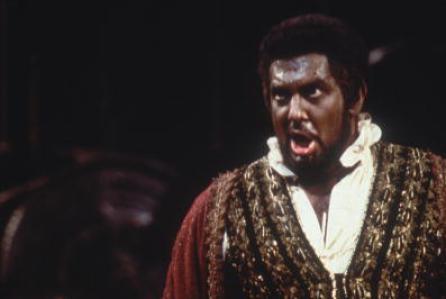 Domingo, once upon a time

The Metropolitan Opera has announced that its Otellos will no longer appear in dark makeup. That is not appropriate for the modern age, they say.

“Fine with me,” I wrote at National Review the other week. “But if you have a thin baritone in the role of Falstaff, will you make him fat? If so, why? If not, why not?”

And sticking with Verdi baritone roles, “should Rigoletto have a hunched back? In some productions, he does not—not even a hint of one. Then how will you express his disability, outsiderness, and grievance?”

One could go on, of course. And I’d like to go on a little bit here in Armavirumque.

In the October issue of the magazine—of TNC, that is—I’ll have my annual “Salzburg Chronicle.” It will include some remarks on Der Rosenkavalier, in the Harry Kupfer production (which is great—honestly great).

Sophie last month was Golda Schultz, a lovely young soprano from South Africa. She is black, or, as I believe they say in South Africa, “colored.” (We have long laughed at South Africa’s racial classifications, but are we really so far behind them? The New York Times referred to George Zimmerman, the shooter in the Trayvon Martin case, as a “white Hispanic.” We could teach the Balkans a thing or two about Balkanization.)

Several times in Der Rosenkavalier’s text, the whiteness of Sophie is emphasized. She is so white—such a white white—and then she is pale, so pale.

Should Golda Schultz have been put in white makeup? No, no—I don’t think so. On the same grounds, one might withhold objection to a white Moor.

Salzburg’s Ochs was Günther Groissböck, an Austrian bass. He is a fit, handsome fellow. And Strauss and Hofmannsthal say specifically that Ochs is fat, a really “gross thickness.”

Was it strange to hear those words spoken—sung—and look at Groissböck? Yes. But in opera, all bets of realism are off, or most of them are.

So, while I choke on political correctness, I am relaxed about a white tenor singing Otello without darkening makeup, to say nothing of a crude blackface.

Although I do think that Rigoletto’s deformity should be noted—should be visible—somehow. It is a key part of the story. Then again, is Othello’s, or Otello’s, race a key part of that story?

You see how this can get tricky. Anyway, as I said at NR, Leontyne Price has some funny stories to tell about Aida and makeup. And opera—my apologies to stage directors everywhere—is chiefly a musical art regardless.

P.S. Above, I used the phrase “crude blackface.” I have now remembered a 2012 production at Salzburg. It was of Das Labyrinth, a sequel to Mozart’s Magic Flute by Peter Winter (libretto by Schikaneder, same as for Flute).

“I found the production refreshing,” I wrote in TNC, “rather than old-fashioned. You should have seen the birdy children, younger siblings of Papageno! There was a worrisome aspect, however: a bit of a minstrel show surrounding Monostatos, the Moor. I am not one to be squeamish about political incorrectness. But I must say my American sensibility was jarred.”