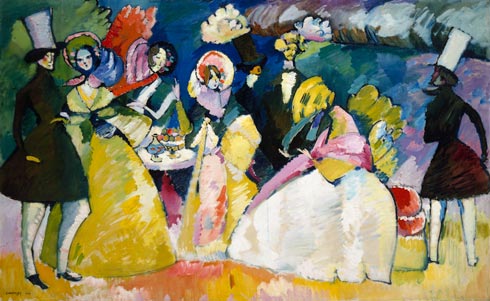 A quick Google search for Kandinsky Before Abstraction, 1901-1911 at the Guggenheim yields disappointingly few results. At a time when technology has made everyone a potential critic, one can hardly find an exhibition note, blog post, blurb or even a tweet that mentions the show, let alone evaluates it. This is a shame; for though the exhibition is small and the subject familiar, it is still worthy of attention and consideration. Vasily Kandinsky is a pivotal figure in the history of modern art: perhaps more than any other painter, he is identified with the transition from representational to abstract painting that occurred early in the second decade of the twentieth century. Kandinsky’s pioneering role makes an examination of the period before his momentous leap very much worth one’s time.

It should first be said that in 1901 when the show picks up, Kandinsky was already thirty-five years old—he had only started painting in 1896 after abandoning a promising legal career. So it should not be surprising that the earliest paintings in the exhibition look like the work of a somewhat skilled amateur—very far removed from what most people think of Kandinsky and his most famous works.

In terms of technique, they are decent Impressionist imitations. Kandinsky gets a lot out of his small, swishy brushstrokes, including a whole crowd of people in Amsterdam—View from the Window (1904) composed of nothing more than flicks of the wrist. However, he has very little grasp of perspective (even of the shallow, Impressionist kind), and the organization of these early landscapes is clumsy and uneven. 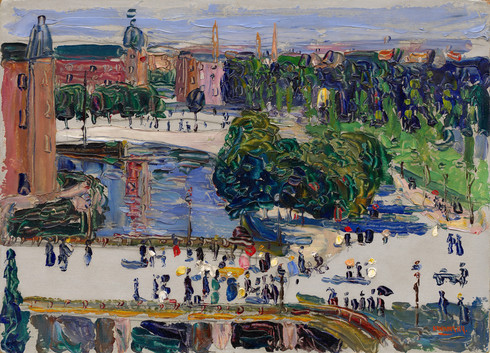 He corrected some of the organizational miscues of these early paintings with a series of woodcuts in 1907. Done simply in black and white, or a very limited palette of muted colors, Kandinsky learns something about concision and composition using this new medium, rendering fairly complex Russian folk scenes with simplicity and grace.

None of these earlier works, however, prepare you for the the second half of the exhibition, paintings from 1908-1911 including a brilliant selection of smaller landscapes and two large canvases that still have the power to astonish. The landscapes are vast improvements on his earlier Impressionist studies. In Study for “Landscape with Tower” (1908), for instance, Kandinsky seems to all of the sudden be seized by color, and applies it with a boldness and intensity across broad planes that speak to something beyond mere representation.

The 1909 painting Group in Crinolines (the first of the larger canvases) is a highly original combination of Impressionism and Fauvism depicting four bourgeois couples in stiff formal dress (the aforementioned “crinolines”) promenading about. The scene is mundane but the extraordinary profusion of color is stunning. It is impossible to list every shade used (I tried in my notes), as Kandinsky covers every corner of the canvas with patches of every bright hue that his mind can come up with.

He is playing a tricky game with this painting, using a whole host of colors that on their own might be considered garish. Yet somehow, through the wedding of two complementary tones, through the mingling and opposition of others, through the mysterious of vibrations of kindred colors and the even more mysterious vibrations of disparate ones, Kandinsky makes it all cohere—and he does so with frightening ease.

The largest work on display, 1911’s Pastorale, is the work that edges closest to abstraction. Like Group in Crinolines, there are figures (three women in dresses, the head of a top-hatted man, and a small grouping of animals), but they’ve melted into the background and have become more placeholders for a variety of yellows and whites than anything truly representative. The perspective has been flattened so much that everything almost exists as a single entity on a single plane in some strange space between background and foreground. There is a feeling of atmospheric space—one might say a kind of naturalistic space—that Kandinsky never really does away with even at his most abstract; a space unlike the impenetrable flat surfaces of the analytic, and later synthetic, Cubists working at the same time. 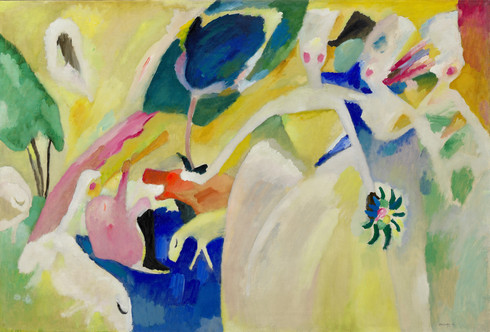 Unfortunately, the exhibition never really explains how or why Kandinsky made such extraordinary leap from the capable but unremarkable early paintings and woodcuts to the fantastic paintings he produced from 1908 onwards. The curation doesn’t makes sense if we are only to look at Kandinsky in terms of formal qualities, because the story that this small collection of paintings tells is not of a linear stylistic progression but of the spiritual awakening which coincided with the years of these later paintings and is essential to understanding the artist.

As Hilton Kramer explained in a 1972 review of Kandinsky for The New York Times, theosophy was a set of beliefs “where reason bows to the irrational and there is literally nothing too farfetched to be entertained as a revelation of eternal truth,” leading rationalist art historians to “treat this conjunction of interests as an interesting but unimportant aberration […] to be acknowledged, if only to be denied any real significance.” It seems as if by titling the exhibition Kandinsky Before Abstraction, the curators were hoping to be able to present the artist before his introduction to theosophy, before his association with the occultists Madame Blavatsky and Annie Besant, before he became devoted to all the spiritual beliefs that we now deem silly and slightly embarrassing.

Yet I do not think Kandinsky would have leapt so boldly towards the expressive use of color and abstraction if he did not sincerely believe, as many theosophists then did, that colors and shapes corresponded to particular spiritual values, or that the material universe was literally on the way to dissolution. Of course he was a diligent painter with a wide range of visual interests and references, but his sensibility and work cannot be explained solely through these means. We should not be embarrassed by his beliefs; other artists have believed things as dubious and far more sinister. But rarely have there been paintings so good or so singular.