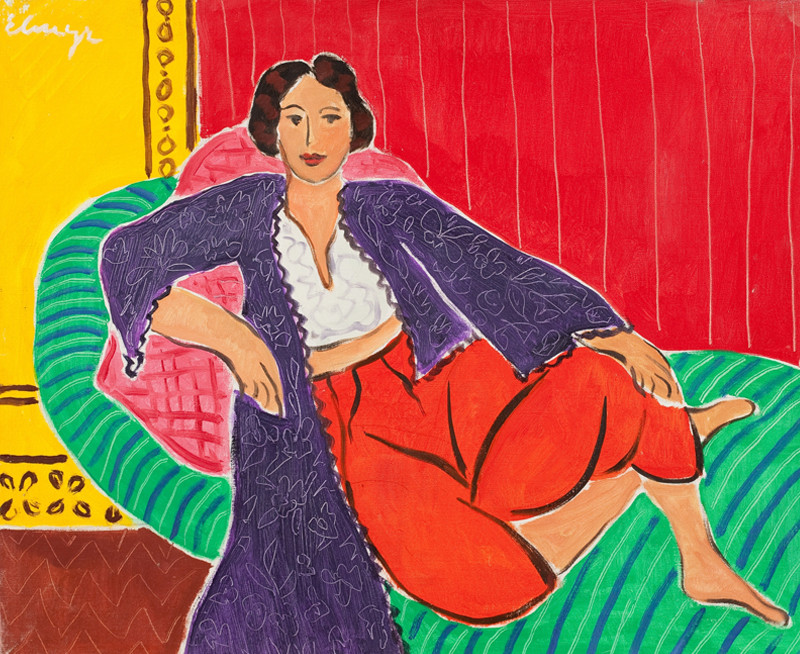 Most television viewers are familiar with the sort of program where an over-enthused seller saunters into a store aiming to reap a cash windfall on some relic of yore, only to have the would-be buyer coo that forgeries abound in these matters, and always have. Cut, then, to our aggrieved item owner in the parking lot, disputing how something centuries old could be a testament to charlatanism. Cut, further, to “Intent to Deceive” currently at the D’Amour Museum, an exhibit of more than sixty works alternately chiding, extolling, questioning, and reassessing the careers and intentions—and madcap backstories—of five master forgers.

The backstory element plays heavily here. Han van Meegeren, who specialized in Dutch masters—every good forger needs a workable niche—insisted on a lifestyle he couldn’t fund with his own frustrated career, which led to depression, which led to fulminating attacks on the art world, which led to a desire for revenge. 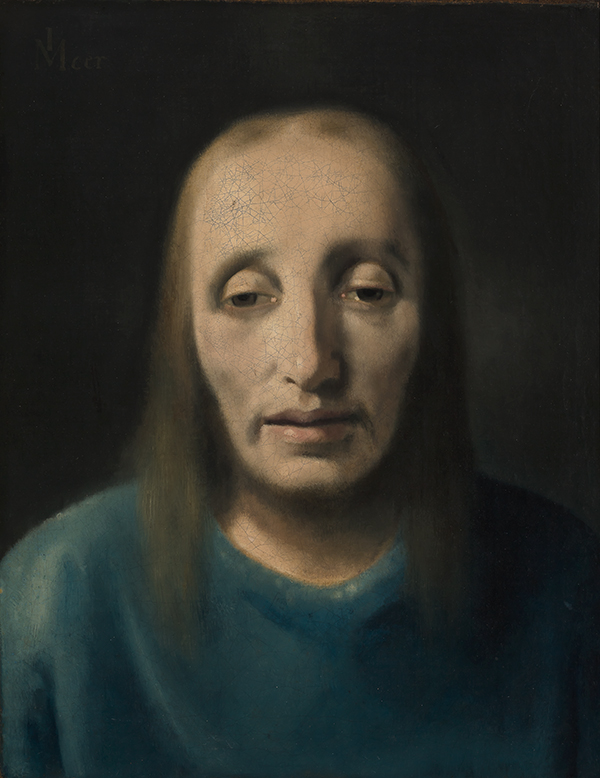 Like a comeuppance-driven character in a Émile Zola novel, Van Meegeren began to pioneer techniques to dupe the experts. The most successful of his developments was the use of an early form of plastic in his canvases, which was baked into them in an oven and then rolled to create tiny, oh-so-convincing striations. The experts are themselves also on display at a show like this, their shortcomings acting as a kind of silent partner—an aspect of forgery which “Intent to Deceive” does a nice job of teasing out. Van Meegern’s manufactured craquelure is abundantly present in the Vermeer-styled Head of Christ (1940–41), in which the savior’s visage strains forward from an all-devouring obsidian background.

If the lives of painters tend to make for better biographies than those of other artists, forgers may well be the best of the bunch. After selling one of his efforts to the Nazis and being charged with treason, Van Meegeren had to replicate his original forgery to clear his name of a larger charge, so he could be jailed on the smaller one of fraud. He was viewed as a Robin Hood of the brush, until he was later uncloaked as a Hitler supporter. Still, to look at his Baburen-based The Procuress (1940), an enchanting work of circular motion with the title figure flanked by two men as though all were in a dance, it’s hard not to walk away with one flat conclusion: The man could paint. Elmyr de Hory could paint better, and his Odalisque (1974), with its female form at once slouching in a chair and maintaining a visual horizon above it, is exactly what a Matisse fan would love to learn was a long-lost legit canvas. He nails the Matisse palette: the reds of the walls and the attire look like they are about to explode, so charged are they with deep-hued energy. Conversely, but just as convincingly, Dansueses Nues, a purported Picasso lithograph, is all supple under-hang, an apt visual definition of friendship for a work modeled on Picasso’s 1923 etching The Three Friends. 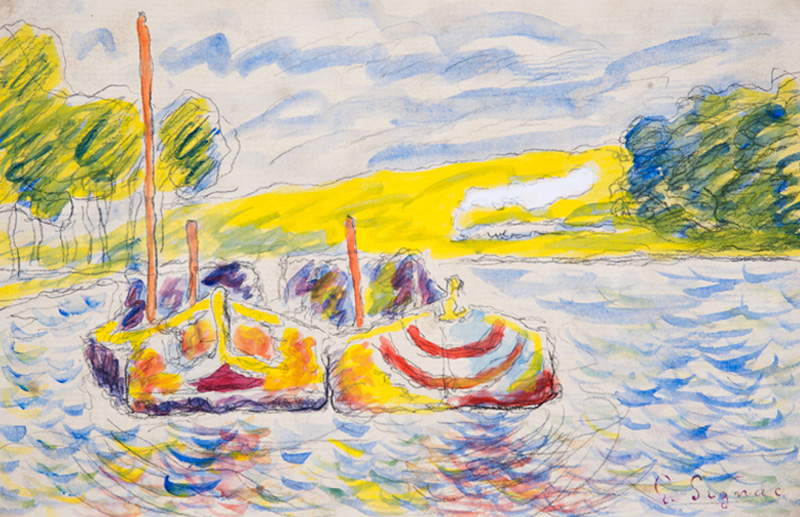 Mark Landis (b. 1955), Untitled, in the style of Paul Signac (French, 1863–1935), date unknown; watercolor on paper. Property of the Oklahoma City Museum of Art. Photo by Shannon Kolvitz.

Van Meegeren died in prison, and de Hory, terrified he was going to do so as well, opted for suicide. John Myatt, meanwhile, is still with is, as is Mark Landis. The former enjoys a nice career as what we might think of as an accredited forger, a purveyor of “genuine fakes.” An untitled 1955 work in the vein of Paul Signac is a robust watercolor, with boat, sky, and river flecked with U and W-shaped brush patterns that heighten the shimmering vernality at play. Landis, an altogether weirder duck—during his heyday, he dressed like a priest, and went around to museums donating works as he claimed this pleased his mother—also imitates Matisse with an untitled pen and ink sketch of a reclining female nude from 1955. A death-like figure, akin to something out of James Whale’s Frankenstein, hovers overhead in the background—a manifestation that belies a mind not at peace in spite of the light touch of Landis’s pen.

There is a depth, a resonance, to so many of the works here, works that have the neat, paradoxical trick of making us reconsider elements of the art they’re trying to exploit, in a sense. The exploitation angle is financial; or one of comeuppance against the perceived baddies of the art world. But the benefactors, really, are the original artists. It’s like when someone tries to write their own version of a Bach fugue. The differing, small personal choices they make inevitably send you back to examining the choices Bach made, and why he might have done so. 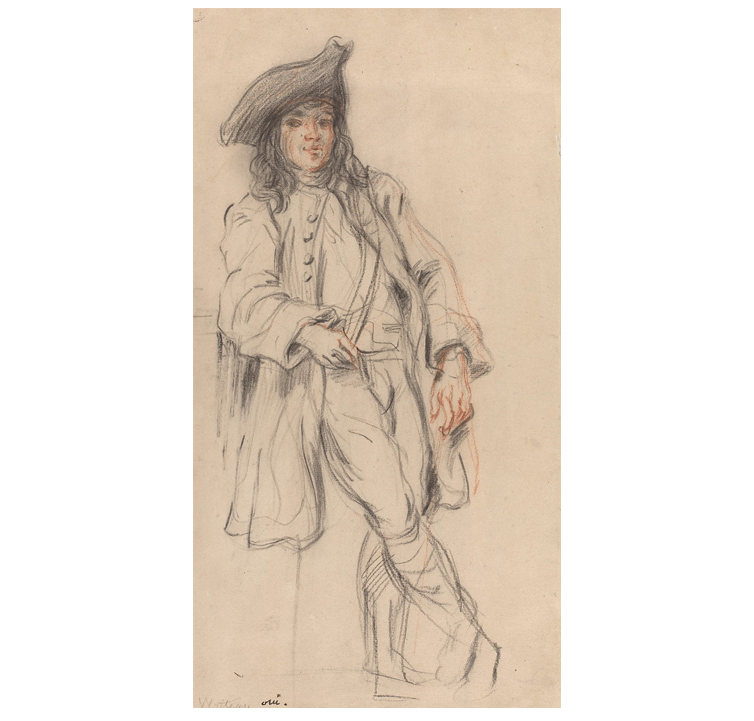 Eric Hebborn may have met with the worst end of anyone here, murdered in 1996 after publishing a how-to guide to forgery, and his black and red chalk Standing Young Man Leaning on a Plinth (styled after Jean-Antoine Watteau) gives one pause that this, even as a forgery, came from the 1970s. The artists of “Intent to Deceive” became what they were, in part, because they were born out of their ideal time and decided to make due as best befitted their talents. The young man’s coat billows across the parchment like paper has been made to go spectral, a note from a world that exists back somewhere else, able to interact with ours only when the necessary channels synch up. When they do, as often happens at this exhibit, artists like Matisse get to dance with would-be Matisse, with both profiting in the bargain, which is not how the world of forgery tends to work.

“Intent to Deceive: Fakes and Forgeries in the Art World” opened at the D’Amour Museum of Fine Arts, Springfield, MA, on January 21 and remains on view through April 27, 2014.

Colin Fleming is completing a novel about a reluctant piano genius called The Freeze Tag Sessions, and a work of nonfiction, Just Give Me the Backing: A Life Lived to the Music of the Beatles.