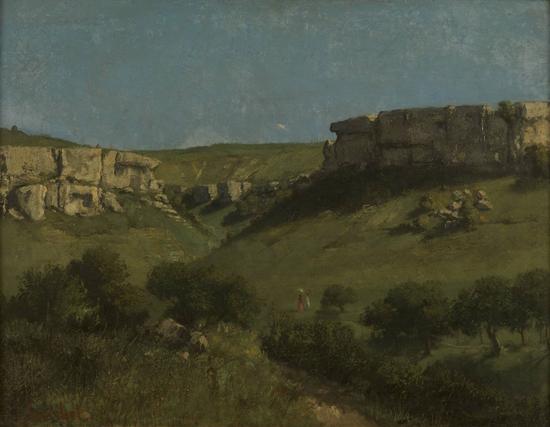 Gustave Courbet (1819–1877) shouldered his way onto the Paris art scene with a pair of blockbusters: The Stonebreakers and A Burial at Ornans (both 1849–1850). Of the latter, he would famously say that it represented the “burial of romanticism,” a repudiation of art for art’s sake. Naturally, realism shares much with romanticism, but Courbet had always been uneasy with labels. “Courbet: Mapping Realism—Paintings From the Royal Museums of Fine Arts of Belgium and American Collections,” at Boston College’s McMullen Museum through December 8, quotes his 1855 Manifeste du réalisme in which the artist clarifies his position: “I simply sought to mine [puiser] from a thorough knowledge of traditions a rational and independent feeling of my own individuality.” 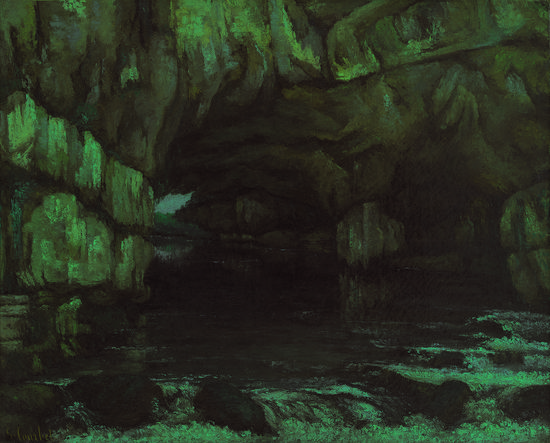 It is worth noting that translators Claude Cernuschi and Jeffrey Howe interpret “puiser” as “to mine,” a word with a distinctly geological connotation rather than its alternate meanings to take or to derive. This decision is a subtle reinforcement of the exhibition’s stated aim: “to map realism in terms of geography as well as [Courbet’s] visual and artistic perceptions.” “Mapping Realism” confines itself to Courbet’s circle of influence in Belgium and America. The catalogue essayist Dominique Marechal observes that Courbet’s love of Belgium and the Netherlands was due not only to the positive critical reception he enjoyed there, but also to his affinity with the north’s artistic tradition. In fact, it was integral to his modernity, which was “grounded in numerous aspects of Dutch painting from the golden age, including the use of monumental formats for mundane and contemporary scenes, and a neutral view of everyday life that avoided anecdote, moral stance, sentiment, and consolation while remaining objective and distant.” 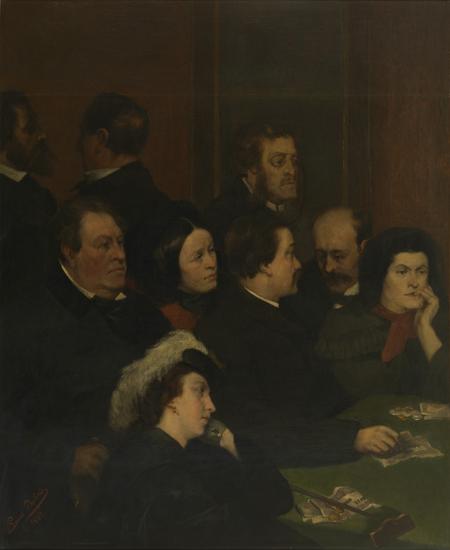 Courbet’s most well-known works are not represented here. There are neither self-portraits nor hunting scenes, although the catalogue does include exemplary essays on each of these motifs by Cernuschi and Katherine Nahum, respectively. Given the impact of his The Quarry (La Curée) (1856–1857) on American art and the fact that it is owned by the nearby Museum of Fine Arts, Boston, it is too bad that this painting appears only as a small black and white reproduction. However, such quibbles detract very little from this ambitious and thought-provoking show. 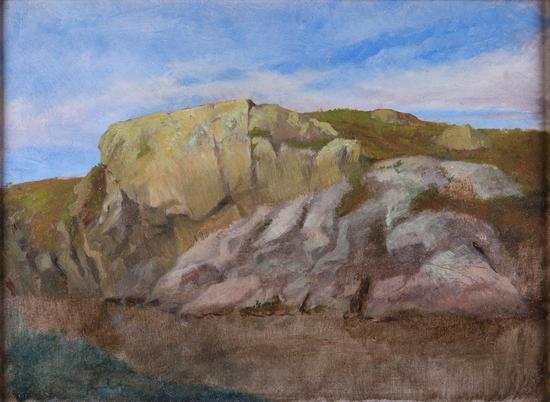 Landscapes represent two-thirds of Courbet’s overall production. Those included here, among them Landscape at Ornans (ca. 1855) and The Source of the Loue (1864), establish his part material, part spiritual approach to the natural world. Courbet was proud of his origins in the Franche-Comté region and painted the buff-colored rocks of the Jura plateau and the forest glens near Ornans many times. He also painted the origin of the Loue River, a popular tourist site, several times, entranced by the primordial mystery of this dark maw surrounded by mossy rocks. 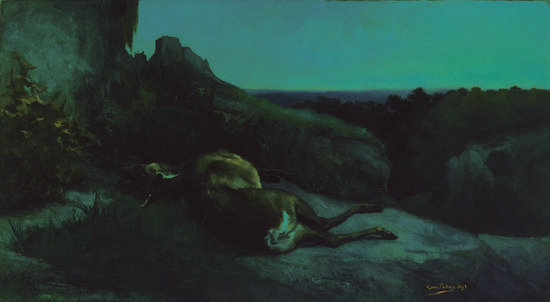 Courbet also painted many notable nudes—his Woman with a Parrot and the explicit Origin of the World (both 1866) have given legions of feminists fits over his objectifying “gaze.” But this exhibit reminds us that even as a young student in Paris, Courbet was already causing trouble. Reclining Nude (ca. 1840–1841) was probably painted from a studio model complete with obligatory draperies and classical reclining pose. The elements may be strictly academic, but this figure is schematic and monumental, tinged with an air of detached appraisal. It’s even possible to recognize in this work the faint stirrings of ideas that would later lead to the matter-of-fact nudity of Manet’s Le déjeuner sur l’herbe and de Chirico’s metaphysical nudes in the marketplace. 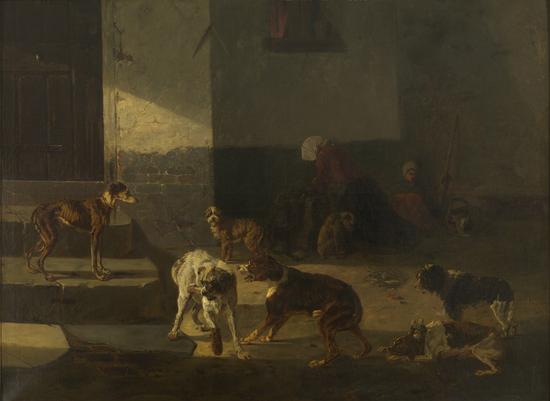 Of the Belgian realists most closely associated with Courbet, only Louis Dubois seems to have achieved a confident style free of the pathos that often tripped up his colleagues. Dubois’s landscapes are elegant and serene and the social commentary in Roulette (1860) is subtle and devastating. His Woman With Bouquet (1854–1855) recalls the seventeenth-century Dutch still life with its vanitas elements amid a jumble of luxury goods. Dubois adds a touch of japonisme and a complex diagonal composition, all executed with admirable aplomb. He also painted the hunt but to very different effect. In contrast to Courbet’s frenzied dramas of persecuted artist as cornered stag, Dubois’s The Dead Deer—Solitude (1863) offers the deer as memento mori. High on a remote cliff, the deer’s dead body—the awkward angle of the head, the distended ribs, and the slack hind legs—is a melancholy reminder of human vulnerability. 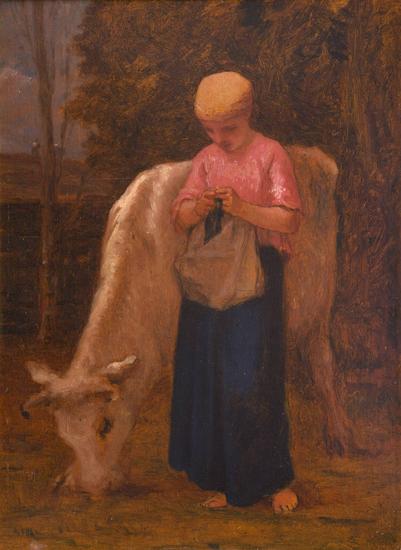 Followers such as Gustave Léonard de Jonghe and Charles de Groux are represented by works that show undoubted sincerity, but come dangerously close to sentimentality. Joseph Stevens, on the other hand, synthesizes many convention motifs in Brussels, Morning (1848) to create a profound expression of urban malaise. With a nod to Northern Renaissance realism, Stevens depicts a group of dogs fighting over scraps while a pair of anonymous women go about their business in the background. In another time, these dogs might have been pampered pets or valuable hunters, but here they are lawless brawlers fighting for existence in a dark, dirty alley. Tradition in art tells us that the dawn brings a day of new possibility, but here the light only serves to illuminate the demeaning depths of starvation. 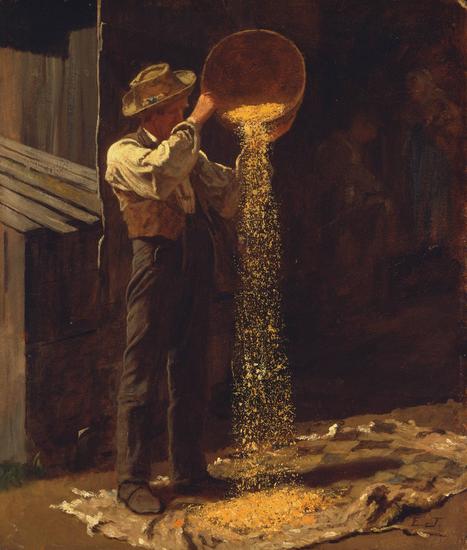 The downstairs gallery focuses on how Courbet’s work affected American art in the decades following the Civil War. As Jeffrey Howe notes, postwar collectors were eager to spend money, but they could not stomach Courbet’s social themes or his scandalous nudes. They preferred his landscapes, a genre that had already been popularized by the Hudson River School and the Luminists. In 1866, The Quarry arrived in Boston to great fanfare. Other Courbets would follow. “What care I for the Salon,” exulted Courbet, “what care I for honors, when art students of a new and great country know and appreciate my works?” Through the many styles represented here by American artists such as William Morris Hunt, Eastman Johnson, Winslow Homer, John La Farge, and Martin Johnson Heade, among others, we see not only the pervasiveness of Courbet’s influence but also how porous labels can be. 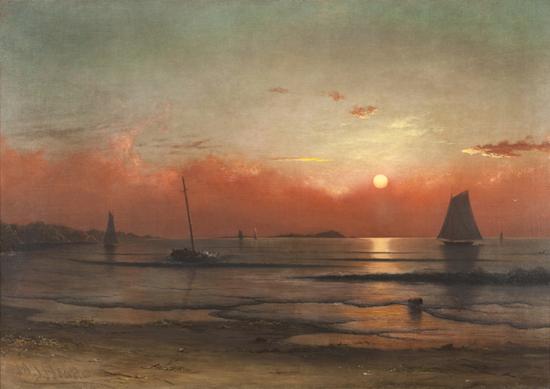 Although he was instrumental in bringing The Quarry to Boston, William Morris Hunt first studied with Millet as is obvious in his Woman Knitting and Cow (Fontainebleau) (1860). But it is without a doubt Courbet who is behind the chiaroscuro portrait of The Tragedian (1878). Symbolism runs through several paintings by John La Farge, but his Rocks—Newport Landscape (Brenton’s Cove) (ca. 1866) could easily be Courbet’s beloved Jura plateau. Elihu Vedder’s Peasant Girl Spinning (ca. 1867) and Eastman Johnson’s Winnowing Grain (ca. 1873–1879) interpret simple rural pursuits in a golden light. (The latter brings to mind Courbet’s The Grain Sifters in which the artist’s sisters and his illegitimate son appear in an odd domestic scene with Brueghel-like overtones.) 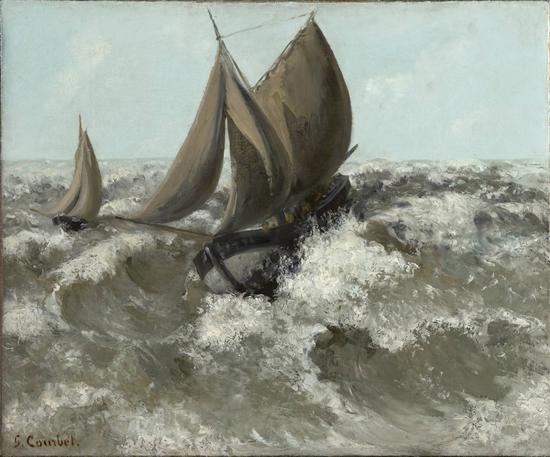 Coast of Newport (1874) by Martin Johnson Heade is a painting I have seen many times at William Vareika Fine Arts in Newport. Unfortunately, its installation at the McMullen prevents its full appreciation. Heade’s highly-polished surfaces and meticulous detail are worlds away from Courbet until we consider the latter’s nearby The Sailboat (Seascape) (1873). It is turbulent where Heade is contemplative, but both clearly shared ideas about scale and the ephemeral and sublime in nature. Revelations such as this occur throughout “Mapping Realism” as it traces the roads that converged in Courbet’s art and those that radiated out into what the curator Jeffrey Howe calls “his expanded spheres of influence.”

“Courbet: Mapping Realism—Paintings From the Royal Museums of Fine Arts of Belgium and American Collections” opened at the McMullen Museum of Art, Boston College on September 1 and remains on view through December 8, 2013.