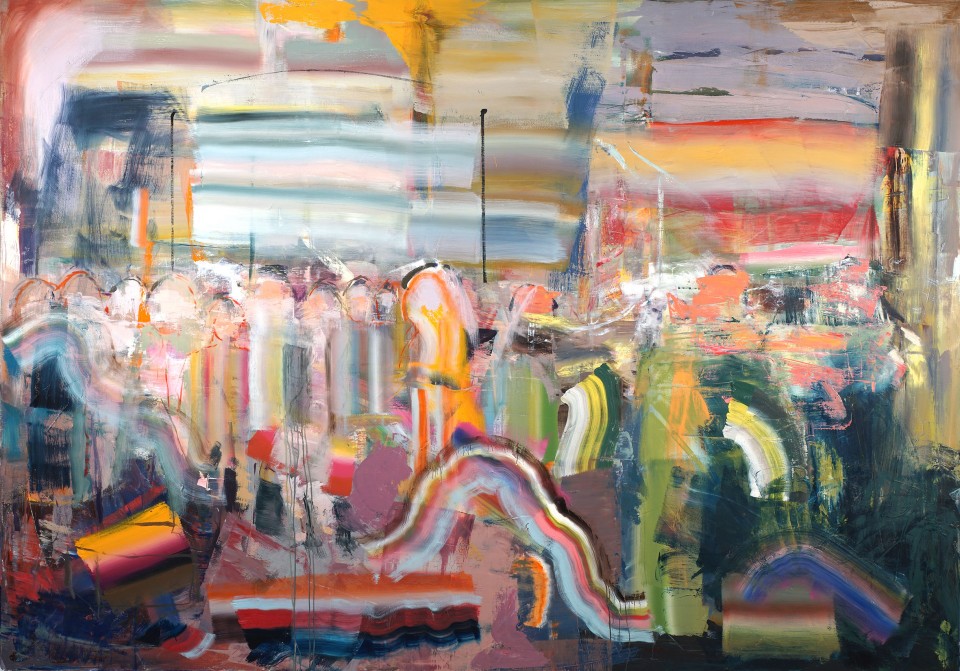 There were two really great things about this year’s Armory Show. The first was that I didn’t have to take a bus to get to Volta, since that fair relocated from SoHo to the pier adjacent to its bigger, flashier cousin. The second was that so many of my friends hate-liked my photo of Mickalene Thomas’s bronze pair of Crocs that my Klout Score went up two whole points.

Which is to say that the Armory Show itself might not have been the highlight of New York’s most important week in contemporary art. (There were of course several stand-outs at the fair. To name just two: Daniel Arsham’s crumbling sculpture of a Hasselblad cast analog photographic processes as ancient history; Sverre Bjertnæs’s multimedia installation for Galleri Brandstrup blended fantasy with bleak reality and featured a fantastic bronze sculpture of a dog.) 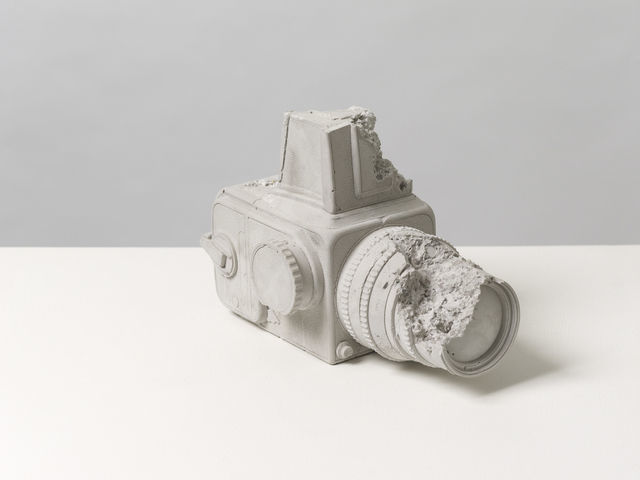 Next door in its new home, Volta continued to play the role of Armory’s smaller, edgier counterpart. Two of my favorite Bushwick-based galleries had strong booths: Robert Henry showed Derek Lerner’s blue-ink-on-paper works that evoke obsessively detailed cellular structures, and Slag featured the work of Naomi Safran-Hon and Dan Voinea. Safran-Hon, an Israeli, takes photos of spaces in her hometown of Haifa that have been abandoned following a Palestinian exodus, then alters them using cement, paint, and fabric to create images that challenge traditional conceptions of home and ruin. The penumbral works by the Romanian Voiena feature hazy figures caught in moments loaded with symbolism from his country’s troubled past: workers struggling in the dark, a man hovering menacingly over a woman. New to me was the work of Ira Svobodová at Los Angeles’s CES Galery. Using acrylic gels, Svobodová builds dimensionality into simple geometric works on canvas. The subtle palettes—grays, browns, pale pinks, white, and black—seem to glow from within. 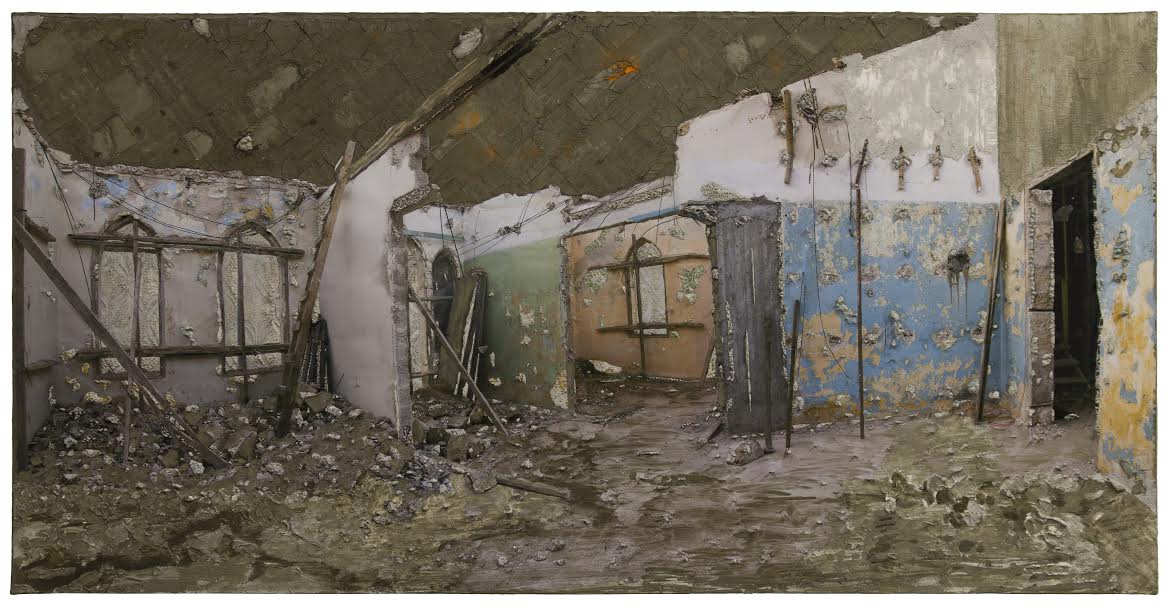 Last year I mentioned that Volta was far and away the best show I had seen. It didn’t stand out as much this time: not because of any lack of quality work, but because there was so much else worth seeing at the other fairs. Pulse, for example, now in its tenth year, wins my vote for most-improved compared to its outing last year. Diana Copperwhite, an Irish painter living and working in Dublin, deserves more attention than she currently receives. Her “Shadowland,” a colossal, color-filled expressionist work humming with energy, brings to mind Richter and others from the new European school. Working on a similar scale, Elisabeth Condon’s paintings pull in elements, both visual and technical, from her time spent in Shanghai and her studies in traditional East Asian arts. This is art of a truly globalized variety. Her work is a mashup of hyper-modern financial buildings, a traditional Chinese junk, and East Coast marketing adapted to a Chinese metropolis (in the form of a small “I love SH” sign), all painted in sparkly West Coast colors. I’d be remiss not to briefly mention photography, considering Pulse’s impressive offerings in that medium. Some might be quick to write off Fabiano Parisi’s work as just another collection of ruin porn, but his photos of crumbling theaters in Detroit and abandoned palaces in Italy are of the highest caliber. David Magnusson’s portraits of fathers and daughters dressed and posed like they are heading to prom, are entrancing—if also more than a little creepy.

New this year to the ever-expanding crop of Armory Week fairs was Art on Paper. If the crowds and the work on display were any indication, it will be back again next year. The Missouri-based artist Julie Blackmon photographs her extended family in carefully staged compositions that capture the chaos of domestic life. These charming photos, especially “Concert,” are the Jan Steens of twenty-first-century suburbia. Other noteworthy pieces at the fair included the cut-and-pasted work of Meg Hitchcock, who carves up books (often religious texts), then reassembles them into elegantly simple lines from prayers; Gilbert Garcin’s French-cinema-inspired photographs; the geometric photograms of Richard Caldicott; and Rupert Deese’s radiant color studies, so clearly influenced by Matisse’s cut-outs. 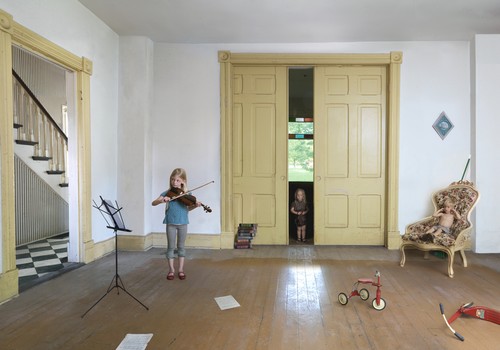 SPRING/BREAK returned this year and really hit its stride. In its new space at Moynihan Station, curators' individual rooms allowed for mini-shows, providing one new experience after another as viewers walked through the fair. “Luminessenz,” an installation by Visualpiolots featuring Atari-like projections, was hypnotic in its immersiveness. Using a single PA system and hanging strips of cloth as multiple screens, it transported visitors into what felt like an ’80s-era computer simulation.

But the curator Antoine Lefebvre had the most interesting project of the week, continuing his study of financial systems by creating a literal social currency: “Zollars,” an analogue to American cash.