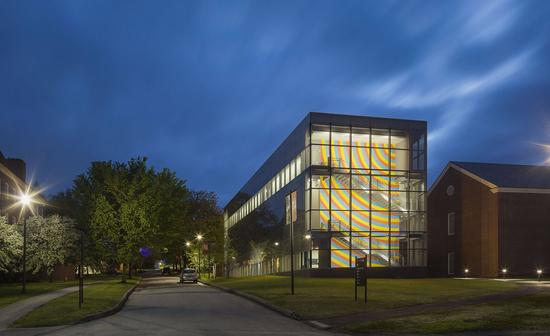 When the Colby College Museum of Art opened its new Alfond–Lunder Family Pavilion in mid-July, the 26,000 square foot addition not only dramatically altered the college’s campus but also the entire art landscape of Maine and the northeast. Built in response to Peter and Paula Lunder’s extraordinary gift of more than 500 works of art valued at $100 million, the building, combined with the collection, completes Colby’s transformation from a good but underappreciated college art museum to a true destination for art lovers.

Designed by the Los Angeles–based architects Frederick Fisher and Partners, the three-story minimalist glass pavilion brings the museum’s total exhibition space to over 38,000 square feet, making it the largest museum in Maine. To give some perspective, it is larger than the Whitney in New York City.

Fisher had the tough tasks of building a new set of galleries for the Lunders’ collection, expanding the museum’s entrance lobby, and linking together the new building with the four existing wings to create a single cohesive museum, but he handles them all rather well.

The spacious glass-walled lobby is filled with natural light, while the attractive new galleries seem astutely designed for maximum versatility. 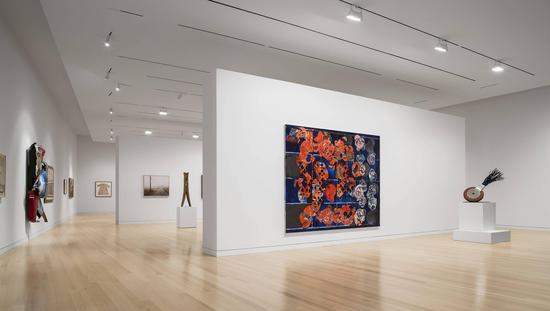 But as Fisher explained, the pavilion itself is also meant to emphasize the importance of the visual arts in a liberal arts environment; by creating a gray glass trapezoid that changes its look according to light conditions, the time of day, and the change of seasons, the building asks you to think about how you look at things before you even set foot in the museum.

This includes having the facades of the building serve as canvases for large-scale installations. On a large glass wall adjacent to the main entrance is a text piece by the German-born Uruguayan artist Luis Camnitzer which reads, “THE MUSEUM IS A SCHOOL: THE ARTIST LEARNS TO COMMUNICATE; THE PUBLIC LEARNS TO MAKE CONNECTIONS.” The piece is appropriate enough for a college museum, but as a work of art it is exceptionally dull in a way that many conceptual works are.

A much more successful installation is a Sol Lewitt wall drawing that covers the pavilion’s entire three-story eastern façade. The work looks like some kind of Platonic ripple, as perfect 12-inch bands of red, yellow, and blue elegantly and rationally cascade down from the wall’s upper right corner. Though striking at all hours of the day, the work becomes a real showstopper at night, as the colorful glow from the illuminated wall spills out onto the campus.

The museum opens with all new exhibitions, but the main draw is unquestionably “The Lunder Collection: A Gift to Colby College,” which runs through June of next year. Featuring 280 of the Lunders’ 500 donated works, it is a delightfully idiosyncratic tour of American art history, with a few pleasing digressions. 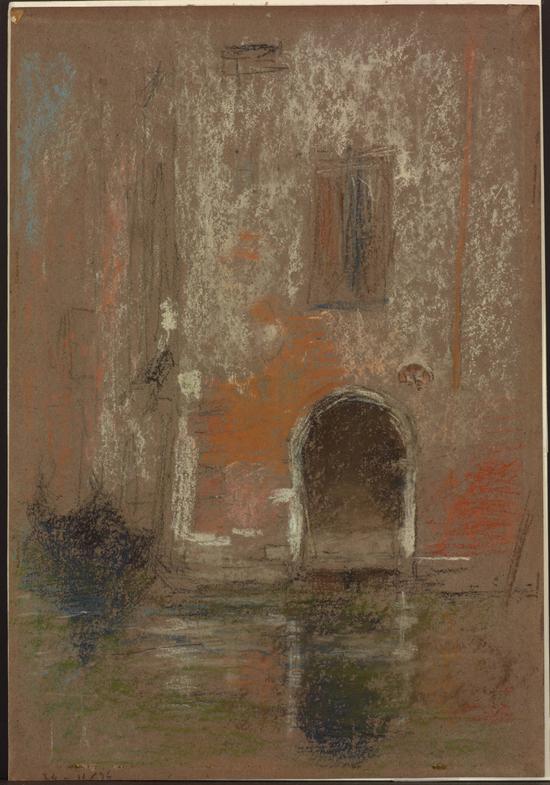 Driven only by their aesthetic passions—for an artist like Whistler, or for a particular genre like the art of the American West—and a desire to increase their own knowledge and impressive holdings, the Lunders’ collection feels incredibly personal and completely free from any of the faddishness that one sometimes encounters in the collecting world.

The extraordinary diversity of the collection, however, leads to the problem of fitting it all together, a challenge that Sharon Corwin, the museum director and chief curator, has handled with intelligence and creativity. This is no more apparent than in the contemporary galleries on the main floor, where works are arranged around loose but stimulating associations that Corwin has cleverly teased out.

One particularly successful grouping has works by Fairfield Porter, Alex Katz, Maya Lin, and Richard Estes that all have something to do with water. In another section, Corwin draws on the Lunders’ exceptional collection of contemporary sculpture, grouping together very different pieces by Claes Oldenburg, Donald Judd, and John Chamberlain, all done in 1977.

A smaller gallery below houses the Lunders’ collection of modern works, and it reminds one that modernism in America encompasses far more than what was going on in New York in the 1940s and 1950s. The gallery includes good paintings by Thomas Hart Benton, Edward Hopper, Jacob Lawrence, Georgia O'Keeffe, Norman Rockwell, and Andrew Wyeth, and two very attractive sculptures by Elie Nadelman. 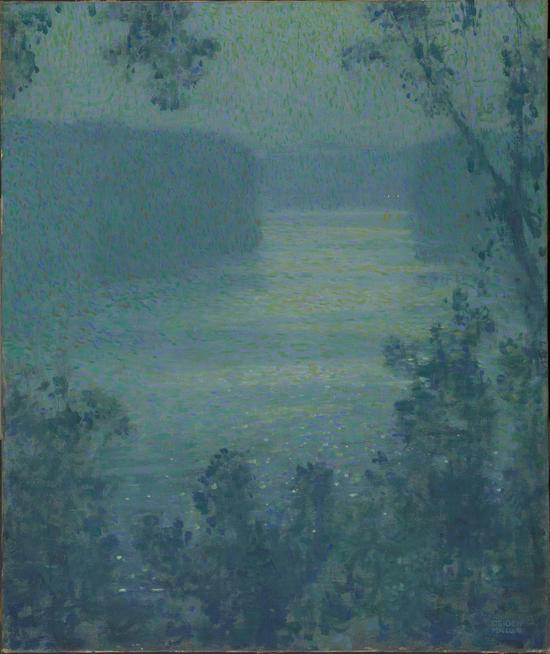 A 1905 painting by Edward Steichen, Moonlight on the Narrows, is particularly striking, as a thicket of pine trees in the foreground dissolves into an impressionist river landscape made up of slight modulations of blue and green done in pinprick-like strokes. It’s a rare small painting that you can get lost in.

The modern gallery gives way to the Lunders’ collection of art of the American West, featuring brilliantly colored mythologies of American and Native American life, and, subsequently, their large collection of works from the nineteenth century.

There are tremendous paintings on display by Homer, Inness, Chase, Sargent, and Eakins, and some charming works on paper by Cassatt. A few beautiful small sculptures and reliefs by Augustus Saint-Gaudens are casually scattered about. Several paintings by John LaFarge are unexpectedly eye-catching, as he uses the translucent qualities of paint to create a jewel-like surface similar in effect to his famous stained glass windows. Thomas Wilmer Dewing provides first-rate examples of American tonalism. There are even a handful of fine French paintings by Corot, Courbet, and Bouguereau to boot—one of those pleasing collecting digressions I mentioned earlier.

Whistler gets his own gallery dedicated to his etchings and pastels, as the Lunders’ collection contains over 300 of his works. 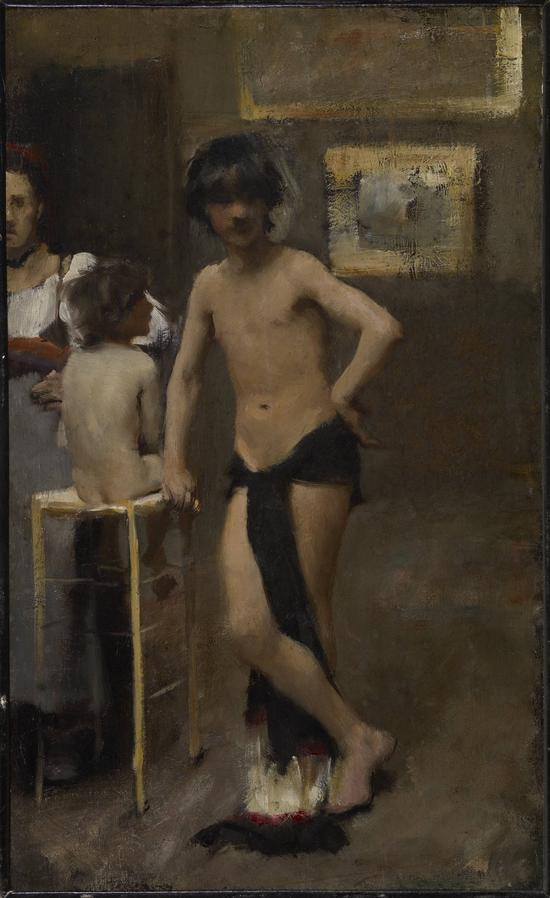 But for me, the highlight of this section was Sargent’s painting Study of Three Figures (1878–79). What makes the painting great is its sense of timing. Perhaps unhappy with the poses of his two young boy models during a long, unfruitful sketching session, Sargent finds them perfectly posed the moment they can relax and act naturally, and quickly dashes off a perfect little painting to capture the moment. Free from the excessive refinement that creeps into some of his larger works, Sargent here deals only in quick, aggressive brushstrokes, heightening the sense of a moment frozen in time.

In addition to the installation of American and contemporary art from the Lunder Collection, the museum reopens with several other exhibitions drawn from the museum’s 8,000–piece collection that are well worth one’s time. 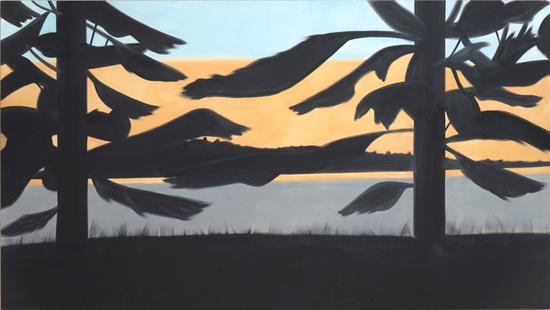 The grandest of these secondary exhibitions is “Alex Katz: A Matter of Light,” which features a dizzying array of forty-eight paintings, drawings, and prints all done by Katz and drawn from the museum’s staggering collection of over 800 of his works.

Though they have relationships with larger museums like the Museum of Fine Arts in Boston and the Smithsonian American Art Museum, the Lunders said they chose to give their collection to Colby because they wanted to be sure their collection would be seen. For this we can all be thankful, because there really is so much worth seeing in this remarkably wide-ranging and eccentric collection. And I’m sure school is thankful too, because to my eyes, the arrival of the Lunder collection and the Alfond–Lunder Pavilion affirms the Colby as one of the finest college museums in the country and an important cultural institution for all those living in and visiting Maine. And for a college museum, it doesn’t get much better than that.