To many Americans, “Night and Day” conjures up the Cole Porter song, composed for the 1932 Broadway musical Gay Divorce. Less known is a weekly magazine known as Night and Day, which was published in London for just six months in 1937. Its short history reminds us of the fragility and, to a certain type of aspiring editor, the frequently fatal attraction of commercial magazine ventures. Magazines are a demanding and hungry species of publication. Some live long lives; most don’t. It is easy to think of luckier examples that have been around for decades, though sometimes at the price of changing their spots. Today’s politicized The New Yorker is not The New Yorker of Harold Ross or William Shawn, and The Atlantic has traveled a fair way from its humble Boston beginnings to its home in the Watergate today. Night and Day—and all of those kindred journalistic lights that flickered and went out all too quickly down the years (one thinks of New England Monthly, The Southern Magazine, and Chicago Times)—offered something valuable: a fixed picture of a cultural moment, which compelled the founders enough to try to document it. All were business ventures, with not only readers to attract and retain, but advertisers and anxious investors to satisfy as well.

Night and Day came to life under the auspices of the London publisher Chatto and Windus, though it stood on its own as a separate company. It appeared weekly from July to December 1937 and was modeled to a degree on The New Yorker, which was founded twelve years prior. It would answer, so it was hoped, a call to arms that Hugh Kingsmill and Malcolm Muggeridge had issued in 1936 on the poor state of the critical press. “There is no critically humorous paper [magazine] in England today,” wrote Kingsmill. “Nor is there any serious paper which has much, or any individuality. We live in an age which has kept the conventions without the convictions of the Victorians.” Graham Greene (at that point not yet the famous author he would become) signed on as the literary editor, John Marks (a Cambridge friend of both Ian Parsons, the magazine’s financial backer, and Alistair Cooke, who was by then established in New York) as the features editor, and Selwyn Powell as the art director. The magazine launched with an attention-grabbing soirée for eight hundred guests at the Dorchester Hotel in London on June 30, 1937. There was a lottery for door prizes. Third prize was a six-month subscription, which turned out to be just how long Night and Day lasted. 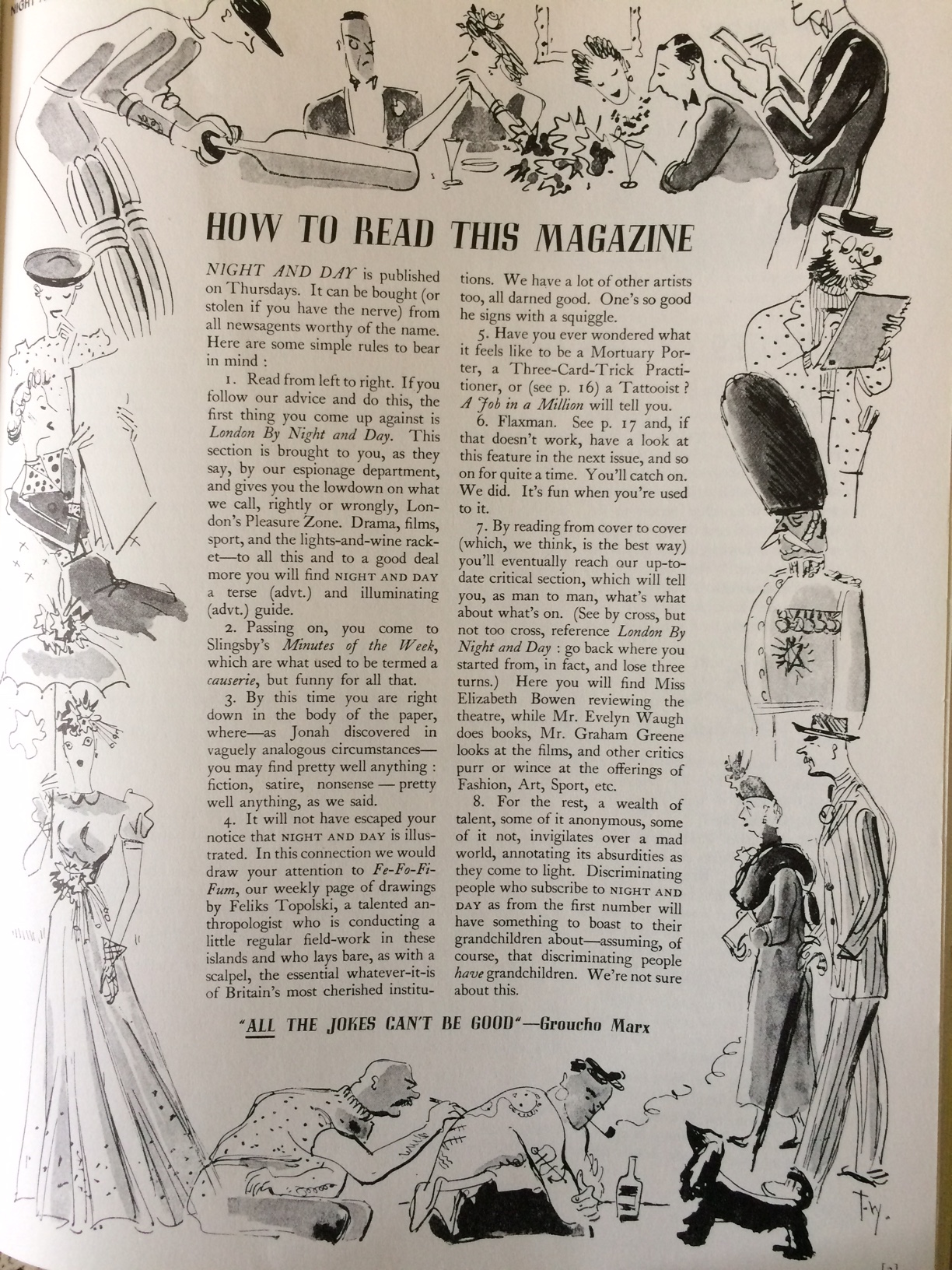 While it did last, it dazzled, an antidote, at least among the sophisticated set, to darkening times. Greene remembered how at the beginning he and Marks were determined to make the weekly light and amusing with “humorous and satirical stuff.” By the end, and as part of a restless search for fresh investors, they would nudge the magazine in a more serious direction, but without beating any drums about it. Marks wrote that “What I do feel very strongly about is that more good can be done in the way of disseminating information and instructing public opinion on political topics under cover of editorial stuff of general interest with no obvious message.” It was a high if subtle aim, and Night and Day attracted the kind of writers who in time might have pulled it off. They were some of the best of those times. Evelyn Waugh churned out book reviews each week. Elizabeth Bowen covered the theater. Herbert Read took a holiday from art criticism to write about detective stories. The architecture historian and cartoonist Osbert Lancaster covered art. The bibliophile and founder of the Food and Wine Society A. J. A. Symons reviewed restaurants. Disguised as “Slingsby” (after a street nearby the magazine’s offices), the then already famous travel writer Peter Fleming cruised through happenings both local and far-off, trivial and not, in “Minutes of the Week.” Greene handled the movies. Anthony Powell, V. S. Pritchett, John Betjeman, and Alistair Cooke (whose “New York Letter” foretold a career’s worth of letters from America after World War II) all made offerings. If not feeling artsy, one could read witty pieces about croquet, snooker, swimming, or driving.

Indeed, reading wasn’t the only reason to plonk down sixpence for a copy of Night and Day on the newsstand. Looking could be enough, thanks to its drawings, cartoons, and covers, a fact that remains true to this day for who knows how many “readers” of The New Yorker. Cartoons easily grow stale, but the best are examples of an art form that retains its appeal without reference to subject matter. Night and Day in this department was second to none. Not quite all were original. What with 1937 being both a coronation year and the centenary of the painter John Constable’s death, the editors went for something big and historical, reproducing four of John Flaxman’s erotic drawings made in 1807 for the Divine Comedy, with cheeky “up-to-date” captions. Beneath the first (a quartet of nude couples cavorting in various stages of swirling embrace): “Been to any good dances this season?” 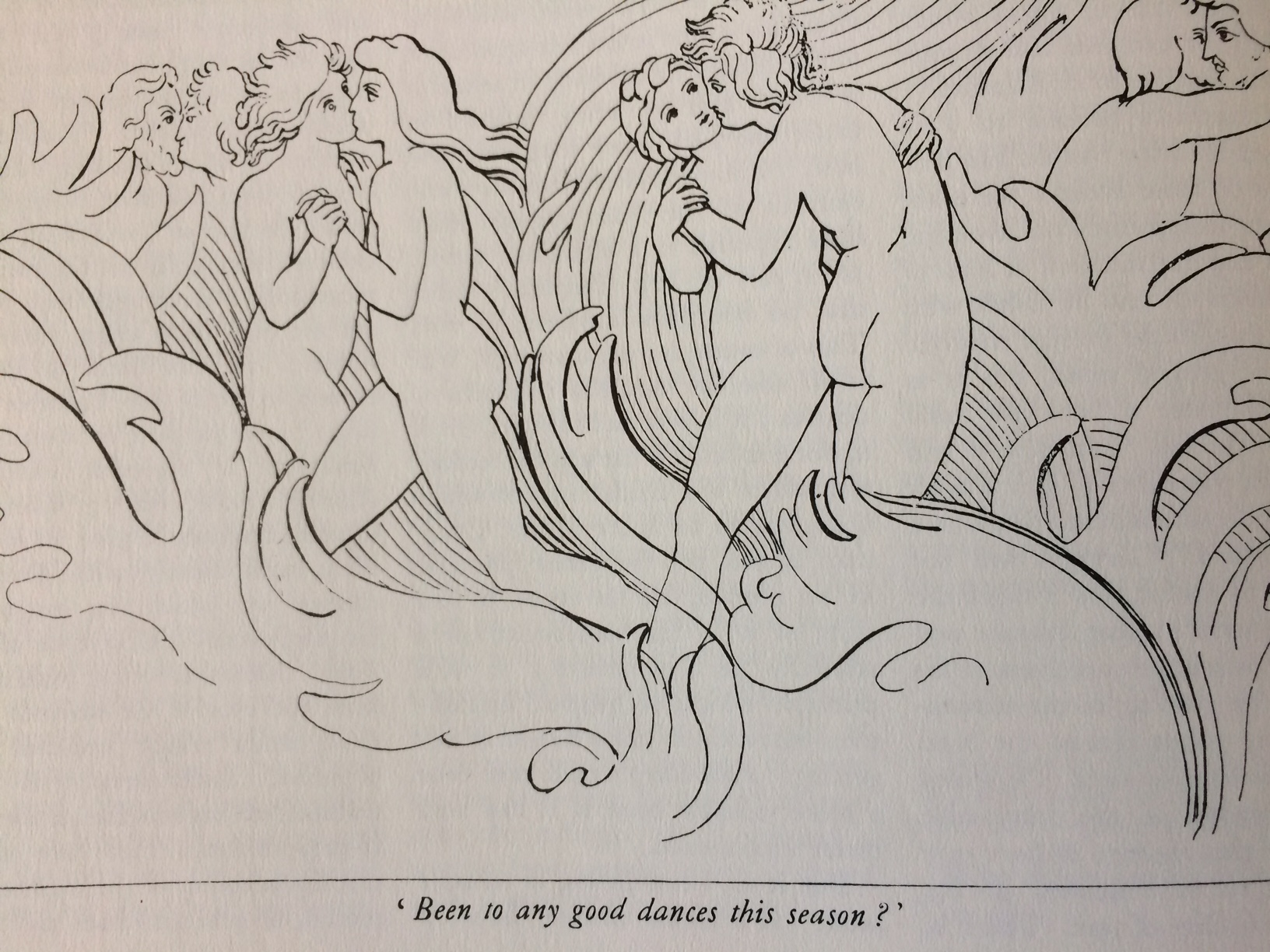 Commentary on current affairs could be cheeky too. The magazine took no political line, but it could have an edge at a moment when appeasement among England’s intelligentsia was much in the air. Christopher Hollis began his column “Germans in the East” with a sober lede about how easy it was “to make a game of Nazi racialist theories . . . but at other times it is equally important to perform the counter-service of trying to explain why such apparently lunatic doctrines are palatable to one among the civilized peoples of Europe.” Then followed on a good ramble through Nazi claims about the importance of racial purity in maintaining Germany’s precarious post-Versailles position in central Europe, and what this meant for the Germans of the Sudetenland in Czechoslovakia and along East Prussia’s Baltic borders. He ended with a startling takedown by comparison. The subject, in hindsight, brings a chill; at the time, it was something few talked about. Trying to tell Germans that there is no such thing as purity of race, he wrote, is “like telling the Jews that there is no Chosen People.” That Jews were still around after two thousand or so years and “had not mingled their blood to form the nations of today” said something about the potency of chosenness, whether divine or self-imposed, for keeping the clan together and the generations coming—there are still Jews because there are meant to be Jews, as the line of thinking goes. Curiously, it was this exact same appeal to destiny that the Germans adopted in 1937 to explain how they had not, over six hundred years or so, been joined together with the Slavs “to form a new mongrel race”; the fact that Germans still are Germans demonstrates that they are meant to be. “And the answer to them,” Hollis concluded, “is: ‘Exactly. You are very like the Jews.’”

The cultural moment that the short-lived Night and Day illuminated required the magazine to strike a precarious balance between ominous thoughts and good fun. No one (except maybe Hitler and Churchill) knew there would be another war, and by the mid-Thirties, Britain was experiencing the return of some of the good life. Advertisements beckoned with Raynes shoes in Regent Street, silks from Pope & Bradley in Bond Street, Bentley motors in Mayfair, and West Indies cruises on Canadian Pacific. It was never nearly enough of course, and when the magazine closed its doors two days before Christmas 1937, it was for the usual money reasons. A nasty libel action didn’t help, sparked by Greene’s review of the Shirley Temple film Captain January, in which he wrote that Miss Temple’s was “an oddly precocious body as voluptuous in grey flannel trousers as Miss Dietrich’s.”

The inaugural issue on July 1 began with a page of instructions on “How to Read this Magazine,” which finished with a Groucho Marx epigraph: “All the jokes can’t be good.” A good many of them were, and the serious bits were too. Even if just for six months.

Timothy Jacobson writes from the Shenandoah Valley in Virginia.