Scratching it down by Adam Kirsch

In 1912, Edna St. Vincent Millay’s poem “Renascence” was published in an anthology called The Lyric Year, and the literary world was instantly fascinated. Who was this unknown twenty-year-old from Camden, Maine, who seemed to be on a first-name basis with eternity?

I saw and heard, and knew at last

The How and Why of all things, past,

And present, and forevermore.

The Universe, cleft to the core,

Within weeks, Millay was getting fan mail from Arthur Davison Ficke and Jessie Rittenhouse. The Poetry Society of America invited her to be the guest of honor at a literary evening in New York, where the attendees included Witter Bynner, Edwin Markham, and Sara Teasdale. The literary elite of pre–World War I America welcomed Millay with open arms: “Lovely time,” she wrote in her journal.

Today, the most notable thing about this list of Millay’s admirers is that every name on it has been forgotten. Doomed like the dinosaurs the day before the asteroid struck, they had no idea that modernism was about to make them all extinct. Over the next decade, American poets like Wallace Stevens and William Carlos Williams redefined poetry as a complex, confrontational, and insistently contemporary art form. Prettiness, gentility, and sentimentality were out.

Yet somehow Millay survives. The publication of Rapture and Melancholy: The Diaries of Edna St. Vincent Millay—skillfully edited by the poet Daniel Mark Epstein, who wrote her biography in 2001—shows that she remains a figure of fascination, as much for what she represented as for what she wrote. Indeed, the two were hard to disentangle from the beginning. What drew readers to Millay in the 1920s, when she became a national celebrity, was the life her poems documented so glamorously—a life of burning the candle at both ends and going back and forth all night on the ferry. The appeal of her Greenwich Village idyll was sexual freedom, and Millay enjoyed it to the fullest, having numerous affairs with both men and women. The sonnets of “Fatal Interview,” inspired by her relationship with the younger poet George Dillon, sound decorous enough today, but in 1931 they were unprecedented avowals of female desire:

This beast that rends me in the sight of all,

This love, this longing, this oblivious thing, . . .

Along my body, waking while I sleep,

Sharp to the kiss, cold to the hand as snow,

Shall lie between me and my troubled lord.

The language here hasn’t made contact with modernism—swords and lords were thin on the ground by the time of the Hoover administration—but the subject matter has, and that is why Millay continues to live on in American literary history.

A reader who opens Rapture and Melancholy expecting the kind of sexual frankness Edmund Wilson brought to his diary of the Twenties, however, will be disappointed. Partly this is a function of chronology. Millay’s journals cover the years 1907–13, before she went to Vassar, and 1927–35, after she moved to Steepletop, an estate in remote Austerlitz, New York, near the Massachusetts border. That means there is almost nothing about the period when the Millay legend was born—between 1917, when she moved to Greenwich Village, and 1923, when she won the Pulitzer Prize and married Eugene Jan Boissevain, a Dutch coffee importer who was rich, tolerant, and not at all literary.

There may have been diaries from those years that don’t survive, but it seems unlikely. As Epstein writes, Millay “was most faithful to her diary during periods of relative stability in her life,” and even then she often had to coax herself into keeping it. At the beginning of 1911, she notes, “I’ve tried to keep a diary and it doesn’t work,” and resolves to write only when inspired by her “spasmodic temperament.” This is followed by the heading “Spasm the First,” and then—nothing. The next entry comes three months later: “I remember I was going to make a long entry and had a lot to say. I may remember it sometime.”

The truth is that Millay was a reluctant diarist because she was averse to introspection. Exciting and momentous things were happening to her during the time covered by Rapture and Melancholy, but she was more interested in experiencing them than ruminating on them. The key turning point in her life, for instance, came in August 1912, when Millay was twenty years old and had been out of high school for three years. Her family had always struggled financially, and sending Vincent, as they called her, to college was out of the question; instead she filled her days by keeping house and taking piano lessons.

Months later she recorded some telegraphic details: “I shall never forget a bit of it, so what’s the sense in scratching it all down?” she writes.

Then one summer night she went to a costume party at Camden’s Whitehall Inn, where she fell into conversation with some wealthy summer visitors from New York. After mentioning that she wrote poems, Millay was persuaded to recite “Renascence.” One of her listeners, Caroline Dow, was the dean of a women’s training school in New York City, and when she learned that this prodigy had never been to college, she promised to get Millay into Vassar and pay her tuition. Even more amazing, she followed through. It was a Cinderella story, and Millay was far too excited to write about it in her journal while it was going on. Months later she recorded some telegraphic details: “I shall never forget a bit of it, so what’s the sense in scratching it all down?” she writes.

Ironically, it was over the previous year, when she had nothing going on and not much to look forward to, that Millay’s diary had been most literary. Bored and lonely, she addressed passionate entreaties to an “imaginary lover” and, in the process, started to weave her own myth. “I do not think there is a woman in whom the roots of passion shoot deeper than me,” she wrote on February 12, 1912. “I am and always have been intense. I feel intensely every little thing.” This was the self-dramatizing impulse that she would channel into poems like “Ashes of Life”:

Love has gone and left me and the days are all alike;

Eat I must, and sleep I will,—and would that night were here!

By the late 1920s, all of Millay’s rapture and melancholy was going into her poetry, leaving little for the diaries but dry notes—“Bought some fire works for Harry in Chatham drug-store. Set some off tonight. Not very good.”—and a growing captiousness. Epstein attributes the change in her personality to chronic ill health, compounded by alcoholism and, after a car accident, morphine addiction. Success also played a role: the poor girl who had once complained about having to keep house for her ungrateful sisters was now a rich woman with servant problems. “The only people I really hate are servants. They are not really human beings at all . . . Even their sins are not human sins but the sins of spiders & magpies, of monkeys serpents & pigs,” Millay writes in October 1927. Millay’s journals are worth reading, not for their literary value, but for the light they shed on the gifts and limitations that go into making a poetic celebrity. 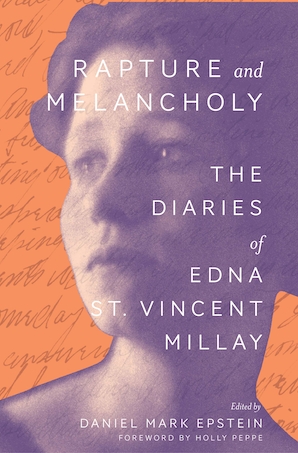 Rapture and Melancholy: The Diaries of Edna St. Vincent Millay

Scratching it down by Adam Kirsch