Not quite right by Glenn Ellmers

On July 6, 2003, three months into the second Iraq War, I showed up at 1150 Seventeenth Street NW in Washington, D.C. I had just turned twenty-two. It was my first day as an editorial assistant at The Weekly Standard.

“I Left My Heart on Seventeenth Street” might have been the subtitle of this book. The address, which by my count Continetti mentions eleven times in his thirteen-page introduction, housed not only William Kristol’s magazine but also the Project for a New American Century, the American Enterprise Institute, and the Ethics and Public Policy Center. Along with the nearby Public Interest and the D.C. office of the Hoover Institution, the totemic location represented an “intellectual community” that ought to have defined the conservative agenda after the Cold War and down to the present day. But it was not to be. “The rive droit is gone now,” Continetti writes. Even the building was demolished in 2016. (The reader can almost sense a part of Continetti’s soul being crushed as he recounts this tragic detail.)

The center of gravity of American conservatism drifted toward Capitol Hill, where . . . the Kirby Center of Hillsdale College and the Claremont Institute’s Center for the American Way of Life hosted scholars and speakers friendly to the administration of former president Donald Trump.

The Weekly Standard and Donald Trump are the alpha and omega of this book—and perhaps Continetti’s whole world. Wistful reflections on the vanished midtown D.C. “hub” and “the self-confident conservative ruling class it represented” (that’s an actual quote) comprise the introduction, while the conclusion obsesses ruefully on the man “whom not only educated elites but also a majority of the American people view with contempt.” In between we get the standard, or rather Standard, account of how the dark side of the Right triumphed over the solons in the salons of Seventeenth Street.

The Weekly Standard and Donald Trump are the alpha and omega of this book—and perhaps Continetti’s whole world.

Continetti, who after The Weekly Standard went on to become the founding editor of The Washington Free Beacon, writes that he was tempted to begin his narrative after World War II, “when the self-consciously conservative movement began to take shape,” but has opted instead for the 1920s in order to establish “some parallels with our time.” Indeed, the importance of those parallels becomes apparent when one notices that several major conservative statesmen and writers from that era are either passed over quickly (William Howard Taft) or ignored entirely (Henry Cabot Lodge, Elihu Root). Instead, The Right devotes pages and pages to the Ku Klux Klan, Father Coughlin, Charles Lindbergh, and—most bizarrely—Huey Long. Continetti dwells on these “conservative” manifestations of American nativism, demagoguery, and racism so that he can later invoke them, with agonizing repetitiveness, to define the horror of Trumpism.

Continetti has a journalist’s eye for the telling detail, and I was amused to learn, for instance, about the banquet of plutocrats at Delmonico’s restaurant in 1882 at which Herbert Spencer chastised the self-avowed Social Darwinists for their obsession with work. There are a number of such piquant morsels throughout the book; unfortunately, the garnish is more satisfying than the meat. No one broadly familiar with the history of the American Right will discover startling insights here, largely because the narrative is so obviously driven by an agenda: sour grapes over the Lost Cause of the Neocon-federacy.

For better alternatives, readers may turn to George Nash’s The Conservative Intellectual Movement in America Since 1945 (revised in 1996), which, though dated, is probably still the best introduction to the topic. The collection of essays in Keeping the Tablets: Modern American Conservative Thought edited by William F. Buckley Jr. and Charles R. Kesler (1988) is notable for the high quality of its representative selections covering the range of thought on the right, though it too shows its age. More recently, American Conservatism: An Encyclopedia (2006) is a handy and comprehensive reference volume, though it lacks any narrative structure. Clearly, we could use an updated guide to the conservative movement. But to be fair to Continetti, neither he nor anyone else could produce something adequate at this moment because American politics, including the Right, is very much in flux. A proper appraisal will have to wait until things settle down.

In the meantime, much of The Right, at least up to the Obama presidency, offers a linear and workmanlike tour through most of the major conservative landmarks of the twentieth century. Continetti rightly notes that American conservatism lacks the traditions of throne and altar that supply European conservatism with an ancestral order to venerate. Thus he properly raises the key question of what American conservatives have sought, over the years, to conserve. Yet despite claiming that his focus will be on the “writers who set in motion the interplay of ideas and institutions, of ideology and politics,” there is little serious grappling with what the most consequential writers have said about the meaning of America, and how they differ. Willmoore Kendall’s name crops up frequently, but with little sustained examination of his thought. Leo Strauss and his many prolific students, who have argued scrupulously about America’s philosophic origins, are covered in four brisk pages, although Allan Bloom gets another two paragraphs later on. (Continetti also must have skipped a lot of issues of National Review if he thinks that Straussians “kept their distance” from the magazine.) Important scholarly disputes—most notably over Lincoln and Locke—are invisible, despite Continetti’s professed interest in “the authors who planted the seeds of activism and political statesmanship.”

Attempting to answer his own question about what to conserve, Continetti fumbles with references to normalcy and the status quo but recognizes those won’t do; then finds more solid ground by citing “the principles that have guided the movement for more than half a century: anti-statism, constitutionalism, patriotism, and anti-socialism”; before settling finally on “the founding documents” as most worthy of reverence and perpetuation. Even this does not get us very far, however, because he doesn’t reflect on the ambiguities in the founding itself that make American conservatism so paradoxical. Commenting on Russell Kirk’s influential The Conservative Mind, Continetti notes that “Kirk defended the Constitution, but as a historical artifact rather than as the political structure designed by the Founders to instantiate the principles of the Declaration of Independence. Thomas Jefferson disappeared from his narrative.” This is correct as far as it goes, but not terribly deep. There is no real confrontation with how antitraditional the Declaration is. Continetti notes Leo Strauss’s ironic quip that one of the most conservative organizations in the United States is the Daughters of the American Revolution, yet he betrays no curiosity about what this implies. In The Right, the founding charters cease to be sources of political wisdom or wellsprings of prudence and become mere conventional authorities invoked to restrain liberalism, which Continetti treats as conservatism that doesn’t obey the speed limit. If he read more deeply in some of the writers he cites he would know that in America, more than anywhere else, conservatism struggles with the tension between the ancient and the good, the permanent and the contingent. Thus, by the end of the book, when the author seems to accept dolefully that Trumpian populism is here to stay, the reader’s main impression is that the most significant feature of American conservatism is how much of a disappointment it has been for the “self-confident ruling class” of Seventeenth Street.

Continetti’s question—what are conservatives trying to conserve?—deserves a better answer.

This does provoke an important and necessary inquiry: how useful is it any more to talk about “conservatism”? As more and more of our institutions fall to the woke plague, Continetti’s question—what are conservatives trying to conserve?—deserves a better answer. Even if all of us on the right agree with pro forma invocations of the Constitution, aren’t we confronted with a dilemma? If, more and more, both in and out of the government, the Constitution is no longer obeyed, respected, taught, or understood, should we then wonder if “conserving” is quite the right word to describe patriotic efforts to recover self-government? There has always been uneasiness on the American Right about the radical Spirit of ’76, although it is particularly odd to see the same people who advocated revolutionary attempts to create democracy abroad now behaving so tremulously when it comes to unsettling “our norms” here at home. The demands of American citizenship have always turned on balancing reverence for the laws with the moral duty to defend natural rights—a challenge that is perhaps more urgent now than at any time in American history. Only “prudence indeed will dictate” how to weigh those claims.

In the last line of the book, the author asserts that the “job of a conservative is to remember.” If that is true, it is all the more reason to wonder if the word is now superannuated. As Aristotle reminds us, politics is the realm of action, not contemplation. Remembering might be a worthy task for homebound grandmothers, but liberty-loving citizens need more than memories to secure the conditions of freedom. Continetti’s advice would not only transform the founding documents into brittle relics, it would reduce political life itself to a form of archivism. Every healthy polity needs to cultivate authoritative traditions and reverence for its past. But our memories serve us best when they enable us to live well. “Remember the Alamo” was, after all, a battle cry.

Glenn Ellmers is the author of The Soul of Politics: Harry V. Jaffa and the Fight for America (Encounter). 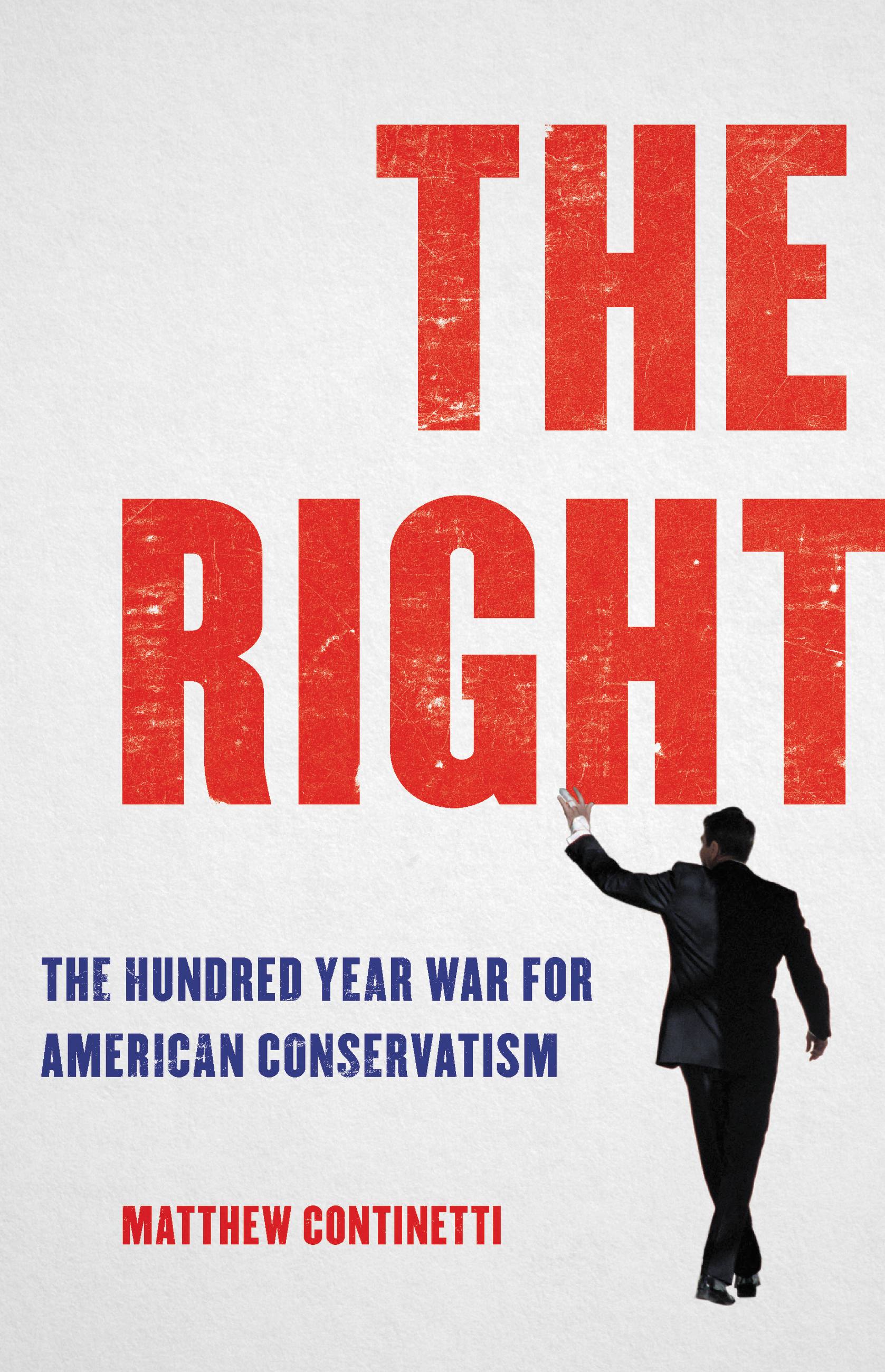 The Right: The Hundred-Year War for American Conservatism

Not quite right by Glenn Ellmers