An architect & a builder by Robert Messenger

In my library, there’s a lovely little volume called Lyric Verse: A Printer’s Choice. I’m a glutton for anthologies and commonplace books. The most delightful come not from major writers, but rather from unusually individual readers: A Tub of Gold Fishes by Nina Cust, for instance, or The Open Road by E. V. Lucas. Lyric Verse was the work of a Dartmouth undergraduate who had won a coveted senior fellowship in 1965 and used the money to steep himself in the rare volumes at the Bodleian, the Bibliothèque Nationale, and the Gennadius in Athens. Back in the States, he tried his hand at fine printing at the renowned Stinehour Press in Lunenberg, Vermont: five hundred copies of his choice of poems in four languages, from Horace and Villon to Kipling and Lawrence Durrell. My copy is on Curtis tweedweave paper, but Curtis rag and both heavy and light Fabriano were also used. The poems were set in nine individually chosen typefaces: Arrighi, Bell, Bembo, Bulmer, Caslon, Centaur (Bruce Rogers’s “Noblest Roman”), Goudy, Romulus, and Tudor Black. The book is all of 112 pages, which required fourteen thousand passes on Stinehour’s hand-cranked Vandercook proof press.

It also required something the nascent printer overlooked: permissions. He did think to send copies to the publishers of the modern writers he included. Alfred Knopf replied with a kind note, praising the printing of the volume and offering some advice. “However,” Knopf wrote, “before you proceed too much further in this, your chosen profession, I strongly urge you to observe one of the most important conventions of our trade known as copyright. I’ve enclosed a small booklet for your edification.” Raymond Hagel of Macmillan was less forgiving. He sent the young man a bill for nearly $2,000. Lyric Verse included three Yeats poems, which went for $35 a line back in 1966. Thus was David R. Godine’s first lesson in publishing.

It also required something the nascent printer overlooked: permissions.

The story is recounted in the brief memoir that opens Godine at Fifty: A Retrospective of Five Decades in the Life of an Independent Publisher. This seductive catalogue depicts three hundred of the superb books Godine has published under his own name and to his very high standards. The notes on each volume comprise one of the most delicious memoirs of publishing in many years.

Godine was lucky in his early mentors, Rocky Stinehour, as well as Leonard Baskin and Harold McGrath of the Gehenna Press in Northampton, Massachusetts, where Godine apprenticed after his graduation from Dartmouth, a stint in the Army, and a year at Harvard. They taught him the pleasure of the printer’s vocation and the beautiful possibilities of type and layout and calligraphy and paper. In the 1970s, he set up his own press in an old barn in Brookline, near Boston. He printed Harvard’s diplomas, pamphlets for Wellesley, and chapbooks by the likes of Hopkins, Anthony Hecht, and Sir Thomas Browne, as well as the wedding and birth announcements that remain letterpress’s stock-in-trade.

Letterpress is the most traditional form of printing—think Gutenberg: a plate of type is inked and impressed onto paper. Its day was closing fast when Godine hung out his shingle. Offset printing is cheaper and quicker and more versatile, as the press can print in multiple colors and on both sides of the paper at once. It is a form of photolithography: a page of type is transferred to a rubber cylinder and then onto paper. (What you are reading right now is offset printed—though offset is itself today threatened by the advances in and cost savings of digital printing.) By the mid-1970s, offset dominated the business, and Godine faced the prospect of investing heavily in new technology if he were to survive as a printer. “Publishing,” he writes, “seemed a less dangerous route.” And so he became, as he puts it, an architect rather than a builder.

His timing was excellent. In the 1970s, book publishing was still an eclectic business with innumerable small houses, each driven by an editor’s vision. The U.S. government, seeing education as essential to winning the Cold War, had poured money into libraries for a generation. Back then, libraries spent it almost solely on books. Before the twenty-first century, U.S. publishers brought out no more than forty or fifty thousand titles a year, which meant that all of the most serious ones would garner some attention. “A review in Publisher’s Weekly or Library Journal, even a bad review,” Godine writes, “would guarantee a minimum sale of a thousand copies.” Today, U.S. trade publishers bring out closer to three hundred thousand titles annually, very few of which sell even a thousand copies. If you include self-published and print-on-demand books, the number of new titles annually rises into the millions. Any visit to Amazon’s digital bookshop reveals a riot of color and noise, drowning out most of what’s imperishable about books.

But to see the elegant calligraphic drg colophon on a book’s spine is to know a tinge of pleasure. One of more spectacular publications I bought in recent years is the Godine edition of The Prelude: not only newly edited with a full scholarly apparatus but also boasting two hundred and seventy paintings and watercolors contemporaneous with Wordsworth’s autobiographical poem. The images are placed directly in the text in the appropriate position. The layout is airy and generous, the book’s trim size a fetching nine by twelve inches. No decision seems to have been made on the basis of cost or commercial viability. The decision was instead to make something lasting, something beautiful.

As a publisher, Godine never forgot what he learned as a printer. Turning the pages of Godine at Fifty, you see beautiful art, beautiful type, beautiful calligraphy. Here’s a book on Olin Stephens’s first great yacht, Dorade. There’s a catalog of the woodcuts of J. J. Lankes. Richard Howard’s translation of Les Fleurs du Mal is likely the first Godine book I bought, and I still cherish it thirty-three years later. But I’d forgotten Otto Bettmann’s Delights of Reading is a Godine title. Samuel Lipman, this magazine’s co-founder, had his first book of music criticism published by Godine. Ward Farnsworth’s Classical English Rhetoric is a Godine book. So is Alexander Lawson’s Anatomy of a Typeface. Even as Godine prepared to sell his business and retire five years ago, he was publishing a luxurious two-volume account of American choral music: American Harmony. You simply must own it.

As a publisher, Godine never forgot what he learned as a printer.

Let’s take a book almost at random. I happen to have both hardcover editions of Richard Olney’s French Menu Cookbook. Godine’s 1985 revision is a masterpiece of book design, much superior to the 1970 “first edition” from one of the major trade publishers. It uses higher quality paper and takes better advantage of the classic red-and-black two-color printing. The illustrations Godine commissioned from Judith Eldridge are superior to the older ones by Gösta Viertel—and more plentiful. The layout is cleaner (thanks to a more comfortable trim size), and it is set in Galliard, a superior typeface. (You enjoy the glories of Galliard as you read this magazine.) David Godine didn’t commission Olney’s book; he simply made it better.

There couldn’t be a finer testament to his long career as a publisher. Godine never had the money to battle with the big houses for big authors. He favored the overlooked and the neglected. And even in its slower days, publishing quickly forgot authors and let good books disappear from view. One writer he helped rescue is William Maxwell, for which Godine thanks Hilton Kramer. He writes that Hilton, this magazine’s other founder, was an early supporter of the press, and the two lunched regularly at the Yale Club to “discuss the sorry state of American letters.” At one such lunch in the late 1980s, he reports, Hilton recommended Godine bring out Maxwell’s overlooked fiction in his new Nonpareil paperback imprint. He eventually published seven Maxwell books, helping spur a just revival. Hilton once told me the same anecdote, though it was the Century Association providing the table and the fare. He also said that after he had extolled Maxwell’s work, Godine excused himself for what Hilton supposed was a trip to the necessary place. Instead, on his return, Godine announced that he’d gone to find a phone and had just acquired the paperback rights to all of Maxwell’s work.

There’s a world to be wistful for in Godine at Fifty. Even more to be grateful for. All hail that young Dartmouth man who longed to make beautiful books.

Robert Messenger is an executive editor at Simon & Schuster. 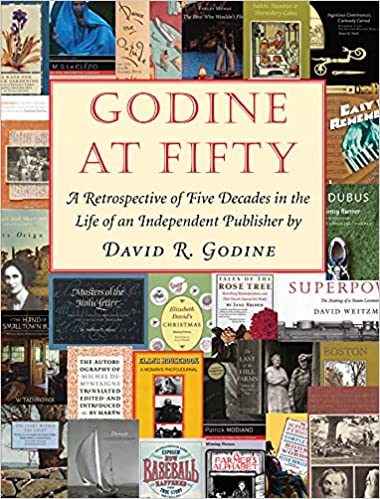 Godine at Fifty: A Retrospective of Five Decades in the Life of an Independent Publisher

A most generous man

An architect & a builder by Robert Messenger