The wisdom of long white beards by Anthony Daniels

By far the best-kept tomb in Père Lachaise cemetery, that which is most devotedly and eternally covered in fresh wreaths, is not that of Chopin, or Balzac, or Delacroix, or Oscar Wilde, or Proust, or even Jim Morrison, but that of Hippolyte Léon Denizard Rivail, known (by those who know him) as Allan Kardec.

Many readers, I suspect, will not have heard of either Rivail or of Kardec (1804–69). A highly intelligent man, he was the founder of so-called spiritisme and wrote books that went through scores of editions, which tried to describe and categorize the phenomena of spirit mediumship (which he believed to be true) in a rational and scientific fashion. Most of his efforts—I have read about fifty pages of them—will strike the modern reader as effluvium, an expense of effort in the service of nonsense, albeit valiant and patently honest. He still has millions of followers, mainly in Brazil, and it is largely Brazilian visitors to Paris who keep his tomb covered in flowers.

It is perhaps indicative of the vastness of the field that Allan Kardec does not even get a mention in Dominic Green’s new book, The Religious Revolution.

This curious fact alone should be enough to tell us that the story of secularization in the West is not a straightforward one, that is to say from religious superstition to scientific rationality without deviation into the byways of the au-delà. It is perhaps indicative of the vastness of the field that Allan Kardec does not even get a mention in Dominic Green’s new book, The Religious Revolution, a fascinating history of spiritual seeking in Europe and North America in the second half of the nineteenth century in the wake of the Enlightenment and the Age of Revolution that so weakened institutional Christianity.1

Just as the downfall of the Soviet Union did not lead to the immediate disappearance of ideological politics but rather to their balkanization into shards of identitarian monomania, so the weakening of traditional Christianity as the predominant religion did not lead to the immediate disappearance of religious longings, no doubt because the existential limitations of human life for which religion provides a solution or at least a consolation did not change merely by the wave of the skeptic philosopher’s wand. We still seek a transcendent meaning to human existence, and the Stoics’ ancient assertion that death is not to be feared because after death there is no one left to experience anything (including fear) still seems, at least to most people, like whistling in the wind. No man, it has been said, is an atheist in the dark, and even in our irreligious times a large percentage of people claim to be “spiritual but not religious”—which has always seemed to me like trying to have their philosophical cake and eat it. They want the comforts of religion without the discipline, especially the prohibitions.

Thus Green is no Whig historian recounting Man’s smooth and constant ascent to a present realistic appreciation of his place in the universe. Rather, he is an ironist, demonstrating what we ought by now to know in any case, though we need to be constantly reminded of it, namely that ideas do not have to be good, or even clear, to have profound effects on human history. For me, life is too short for Emerson, but that does not mean that he was not a very important figure in his day. Apart from anything else, I admire Green’s devotion to his task in reading such luminaries as the founder of Theosophy, Madame Blavatsky. I would prefer to read a telephone directory, if such still existed.

Psychologically, Ms. Blavatsky (as I suppose we should now refer to her) is perhaps the most curious of all the curious characters who abound in Green’s pages. A mythomaniac as to her own biography, materials for the early part of which do not exist, as well as to much else besides, she clearly indulged in fraud and plagiarism, but probably in the name of a higher truth of which she believed herself apprised. This use of fraud in the name of higher truth is not unknown in the academic world, after all, nor indeed is it unknown to policemen who are certain that a suspect is guilty but cannot quite prove it. Thus, one can cheat and believe oneself honest at the same time, which I suspect she did.

Psychologically, Ms. Blavatsky (as I suppose we should now refer to her) is perhaps the most curious of all the curious characters who abound in Green’s pages.

She wrote screeds of impenetrable balderdash, but balderdash with the literary equivalent of the smell of joss sticks, the wisdom of long white beards, and the sound of wind chimes. Physically unprepossessing, she had hypnotic, cathode-ray bulging eyes that uncannily resembled Hitler’s. Such eyes, which exude conviction, often impress even highly intelligent and sophisticated people and entangle them, at least temporarily, in a sticky web of highfalutin nonsense.

The triumph of material science, technological invention, rationalist philosophy, and historical criticism in the nineteenth century left much of thinking humanity without any comfortable or comforting bearings in a universe utterly indifferent to the concerns or welfare of mankind, devoid of any meaning other than that of raw existence itself. Who has not looked into an immense sky on a cloudless night and not felt a frisson of fear or humiliation at his own insignificance, despite all the importance with which he invests his own affairs for his brief conscious sojourn on Earth? (Perhaps the fact that the world is now so polluted that great masses of people rarely, if ever, now see such immense skies is not without its benefits or advantages.) Nietzsche, who clearly apprehended the deep psychological and cultural effects of the extinction of traditional Christian religion in Europe as a living force, tried to replace its long, melancholy withdrawing roar with a roar of his own, which strikes me as in no respect superior, except in the matter of prose style, to Ms. Blavatsky’s lucubrations, the main difference being that Ms. Blavatsky’s influence—on Gandhi and Nehru—was much less horrible than Nietzsche’s on Hitler and Ayn Rand.

I enjoyed very much Green’s characterization of George Bernard Shaw as the first modern celebrity: determined to be in the eye of the public at all costs, especially at that of truth, always preferring a bon mot or a witty paradox to deeper reflection, but prey to vaguely mystical or spiritual conceptions such as the life force. His sparkling wit was both a gift and a curse: it caught everyone’s attention and was often very amusing, but it kept him superficial.

Rather surprisingly, Tolstoy is missing from this history of the roots of modern spirituality. One of the greatest writers of all time, which perhaps explains his detestation of his rival in that respect, Shakespeare, Tolstoy was one of the panoply of Victorian figures (Marx, Darwin, Dostoevsky, Shaw, William Morris, Havelock Ellis) whose long-beardedness bespoke wisdom and who, clean-shaven, might have exerted a much lesser influence. It might also be doubted how far Tolstoy was truly religious, his emphasis on the Gospels transforming Christianity into a predominantly social philosophy, but he was taken by many in his own time as a spiritual leader or exemplar (whom Chekhov, incidentally, derided as much as he revered the writer).

Green’s book is a timely and erudite corrective to the view that I once held myself, having absorbed it unquestioningly from the orthodoxy of the time, that secularization was a straightforward, inevitable, and irreversible process that would soon, at an accelerating pace, encompass the world. According to this view, everyone would become scientistic materialists, concerned only with the here, now, and measurable. Even today, some have difficulty in accepting that religious belief has, or could even possibly have, anything to do with the upsurge of Islamist ideology, precisely on the grounds that God is dead. Islamism, therefore, is to be analyzed as if it were simply another secular social movement, reacting against inequality, injustice, impotence, etc. It is simply not conceivable to them that people, even with doctorates in science, could truly believe that by blowing themselves up to kill infidels they will be rewarded with orgasms interrupted briefly by delicious repasts.

But, in fact, as this book shows, scientistic secularism was never really predominant, let alone universally accepted. G. K. Chesterton may not really have said that when men ceased to believe in God they would not believe nothing, they would believe anything, but Green provides historical evidence of the truth of this dictum. In fact, most people cannot do entirely without transcendental belief.

Most people cannot do entirely without transcendental belief.

I am not religious myself, nor even “spiritual but not religious,” but I have long learned to be tolerant of what strike me as the most bizarre beliefs—so long as no one tries to impose them on me, that is. I learned this tolerance comparatively late in life (until then, absurdity irritated me). I used to frequent a secondhand bookshop run by a communist of the Enver Hoxha faction who bought a collection of spiritualist books from the widow of a longtime spiritualist. They were published by the Spiritualist Book Club, along the lines of Victor Gollancz’s Left Book Club, and I bought a few of them, the most memorable of titles being Thirty Years Among the Dead (in two volumes), written, not altogether encouragingly, by a Chicago surgeon.

One of the books, published in 1940, informed readers how to stay in contact with their dead pets, which contained photos of spectral dogs. Absurd! But then I recalled that a year before the book’s publication, 250,000 dogs had been put down in Britain at the beginning of the war because it was feared that there would not be enough food to feed them. When one considers how passionately attached to their dogs people often are, the aggregate suffering, guilt, and longing caused by this massacre must have been immense. How comforting for those whose duty it had been to protect their dogs to believe that in reality they had survived and not been put down! The comfort may have been based on illusion, but comfort itself is not illusory, and everyone stands in need of it at some time. If it were possible to have no illusions, which is doubtful, life would be intolerable.

Anthony Daniels is a contributing editor of City Journal. 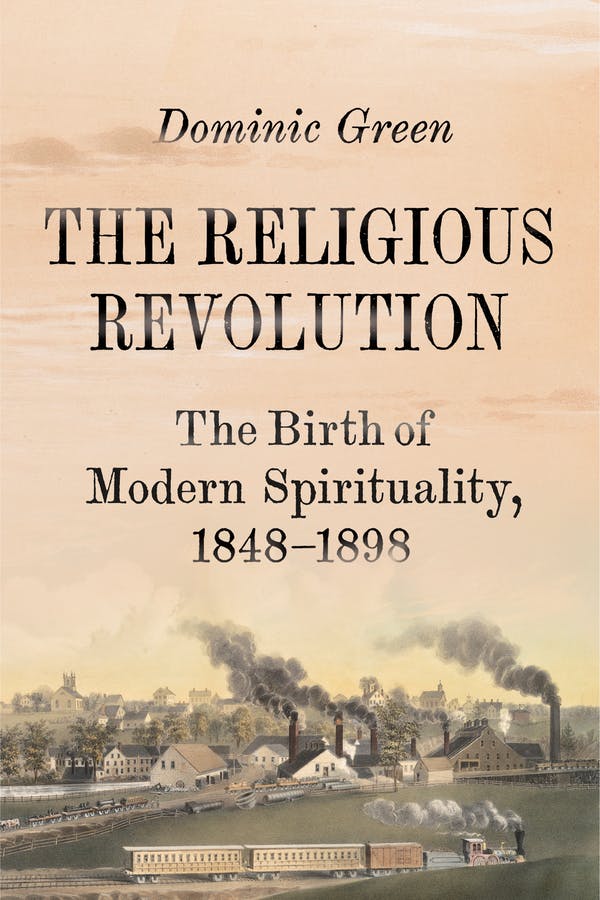 The Religious Revolution: The Birth of Modern Spirituality, 1848–1898

The interpretation of the tale

The wisdom of long white beards by Anthony Daniels