A gelid guy by Harry Mount

Sir Ernest Shackleton (1874–1922) was a heroic failure. On his first trip to the Antarctic, from 1901–04, with Captain Scott—another heroic failure—he had to go home early because of bad health, even if the team did go farther south than any man before. In his second expedition, from 1907–09, Shackleton got even closer to his goal. Nonetheless, both he and Scott failed to get to the pole, while Roald Amundsen of Norway did, in 1911. Then, when Shackleton tried to go right across Antarctica, in 1914–17, he encountered a new level of disaster—when his ship, Endurance, was trapped and destroyed by pack ice. He triumphed only in averting more failure by leading lifeboats to South Georgia, a horrifying 830-mile journey, dodging killer whales and ice floes. On his final expedition, he died in 1921, aged only forty-seven, of heart failure. At his widow’s request, he was buried in South Georgia. Still, despite these serial failures, you can’t help but admire Shackleton’s sheer doggedness and resilience.

“For scientific leadership, give me Scott. For swift and efficient travel, Amundsen. But when you are in a hopeless situation, when there seems to be no way out, get on your knees and pray for Shackleton.”

Sir Ranulph Fiennes, the greatest living polar explorer, certainly agrees. In his summary of Shackleton, he quotes the words of Shackleton’s polar contemporary Sir Raymond Priestley: “For scientific leadership, give me Scott. For swift and efficient travel, Amundsen. But when you are in a hopeless situation, when there seems to be no way out, get on your knees and pray for Shackleton.” The trouble was that, all too often, Shackleton—through lack of money and appalling planning—was the leader who got his men in a hopeless situation in the first place.

Endless books have been written about Shackleton. The difference with this one is that Fiennes has made very much the same trips as his predecessor—and more. When Fiennes describes Shackleton’s journeys, he drops in reminiscences about his own that, without arrogance, show what horrors they both endured. As Fiennes posits, “To write about Hell, it certainly helps if you have been there.” And, my God, it is Hell! But that’s the ultimate pleasure of these extreme travel books, particularly when you read them in winter—delighting in all that frozen agony while you stick another log on the fire and fill up your third glass of wine.

What horrors Shackleton had to deal with—not least the katabatic gales sweeping down the glaciers. There was always the threat of the food running out. When the principal supplies were gone, Shackleton and his men were reduced to eating pemmican and pony maize, with the odd high from Marshall’s Forced March tablets—a mixture of cocaine and caffeine.

And there was the constant tussle with death. Every step Shackleton and his men took towards the South Pole was an extra step they’d have to take on their return. That’s why he never made it to the pole—he feared that, like Scott, who made the outward trip successfully, he and his men would die on the return leg.

Shackleton’s incompetent planning didn’t help. Incredibly, he took unshod ponies to the Antarctic, meaning they constantly slipped and fell. His preference for ponies over dogs was misguided. Dogs retain their heat; ponies dissipate it. So, to keep the ponies warm, Shackleton’s men had to build them windbreaks out of snow blocks and boil their maize into hot mash with precious fuel supplies. When Amundsen got to the South Pole first, in 1911, he used only fifty-two trained dogs and skis.

The Antarctic isn’t content with freezing humans to death. Its harsh sunlight blinds them. Shackleton bravely refused to wear snow goggles because they fogged up with perspiration and hindered his navigating the path ahead. And so the sun’s ultraviolet rays burned the corneas in his eyes, as well as any exposed skin. His face became pocked with scabs and blisters while his lips cracked and bled. Every time he opened his scabbed lips to speak, he ripped off more strips from those lips, meaning they bled and then froze. Not for the first time, the reader asks, “Heroic—but why on earth do you do it?”

Even with modern technology, Fiennes still has to undergo some humiliating rituals at the poles. He describes how it’s better to keep your urine bottle in your sleeping bag rather than brave the cold outside. Still, he says, “Ensuring all of the pee went into the bottle, with your shivering, was quite a challenge.” Even when Fiennes stayed in his sleeping bag, and with all the right equipment, it was so cold after dark at the poles that he lost two thousand calories a night.

To be fair to Shackleton, he wasn’t a complete failure. He was the first person to spot plant life in deep Antarctica. He pointed out some “green stuff” to Koettlitz, the expedition botanist, who dropped to his knees and then jumped up, crying out, “Moss!! Moss!! I have found Moss!!!” Shackleton said, “Go on! I found it.” Koettlitz took the achievement quite seriously and said, “Never mind. It’s moss. I am so glad.”

That vignette shows the undercurrent that charged the great polar expeditions: competition. It was inevitable. To raise the huge amount of sponsorship money required for a polar expedition, you also needed a major goal—ideally being the first to reach one of the poles. But, beyond that, these were naturally competitive men who guarded their triumphs and their routes jealously.

When Fiennes was launching one of his polar expeditions, Prince Charles told him, “No racing!”

In a crazy convention, it was accepted that, when Shackleton set off on his first Antarctic expedition without Captain Scott, he wouldn’t use the route Scott had previously used. So Shackleton was forbidden by custom from landing at McMurdo Sound. In a world where death was just around the corner, this strange gentleman’s practice was potentially suicidal. But still, Scott wrote to Shackleton, when he did threaten to use his route, “I think anyone who has had anything to do with exploration will regard [McMurdo Sound] as mine. It must be clear to you now that you have placed yourself in the way of my life’s work.” Scott even wrote to Edward Stanford, the owner of Stanfords Bookshop in London, demanding that Shackleton’s name be taken off the map showing their joint expedition. Stanford complied.

What a vicious rivalry built up between the two doomed heroes! In his memoir The Voyage of the Discovery (1905), Scott claimed that Shackleton had been an “invalid” on their joint trip, while he himself was “the least affected of the party.” The insult made Shackleton determined to triumph in future expeditions, which would set Scott straight. Only Captain Scott’s epically tragic death in 1912 put an end to the feud. It didn’t help Shackleton that Scott had had a distinguished naval career while Shackleton was seen as the maverick outsider. That competitive instinct survives today. When Fiennes was launching one of his polar expeditions, Prince Charles told him, “No racing!”

By his own admission, Fiennes “did not excel academically” at Eton. But that doesn’t matter—in fact, it helps—in the writing of this book. It has a Boy’s Own adventure feel to it, uncomplicated by faux-academic jargon and obscure terms.

Fiennes, like Shackleton, has a chip of polar ice in his blood—in a compelling way, he can’t contain his excitement at those feats of terrifying derring-do in the Antarctic. Despite having suffered from gangrene and crotch rot and losing the ends of five fingers to frostbite, Fiennes still is prey to the Danish condition “polarhullar”—“an ache for the polar regions.” Shackleton had a severe case of polarhullar, too. He said once, when he was back in Britain, “I long for the unbeaten trail again.”

Fiennes is also good on Shackleton’s character. Born in Ireland in 1874, the son of a doctor, Shackleton was educated at the private Dulwich College, later the alma mater of P. G. Wodehouse and Raymond Chandler. He didn’t do particularly well at school, but you can see his character emerge: amusing, tough, good company, and dead keen on adventure. He was also a good-looking ladies’ man. His angelic wife, Emily, had to put up with his flirtations with smart society ladies, as well as his long absences in the Antarctic.

Shackleton’s relentlessly upbeat side was sometimes irritating. The physicist Louis Bernacchi said of Shackleton, “His aptitude for satire, for bantering his companions, could be embarrassing and sometimes annoying.”

But it was that same relentless optimism—and sharing his precious, rationed biscuits—that kept his men going when they thought death was near. It also fed into his natural gift for public speaking, which came in handy on the lecture tours he made on his return from the Antarctic.

Fiennes, too, has his comic side. When discussing Captain Scott’s terrier, Scamp, he remembers Bothie, the terrier that belonged to Fiennes’s wife, Ginny, and a companion on many expeditions. Bothie became the first dog ever to have lifted his leg at both poles—a record The Guinness Book of Records disappointingly declined to accept.

Harry Mount's most recent book is A Lust for Windowsills (Little, Brown & Company). 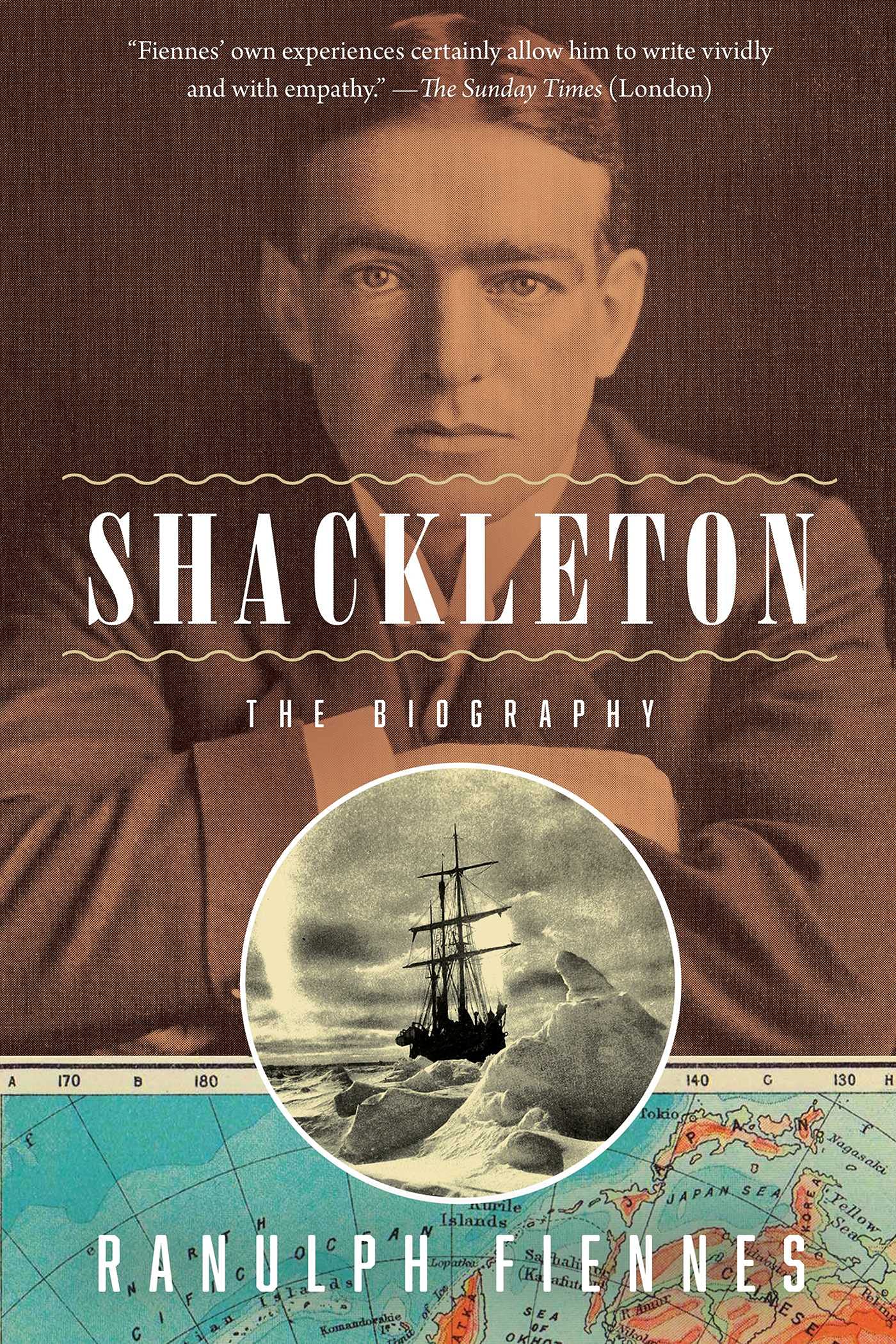 III History by other means by Anthony Daniels

IV In the footsteps of Sade by Roger Kimball

A gelid guy by Harry Mount