The sound of silence by Andrew Stuttaford

The Middle Ages,” wrote Carl Jung in a 1958 book about ufos, “have not died out. . . . Mythology and magic flourish as ever in our midst.” I doubt if Monica Black, a professor of history at the University of Tennessee and the author of A Demon-Haunted Land,an intriguing, subtle, and occasionally startling examination of a wave of superstitious belief that swept across Germany in the immediate post-war years, would disagree. Certainly, Black recognizes the fascination that supernatural ideas and practices, from astrology to the occult, held for millions of Germans “across the modern period” as well as the persistence of a long-standing tradition of folk and magical healing.

But that is not inconsistent with her finding that there was “something quite particular about the kinds of mass [allegedly] supernatural events that took place in Germany after World War II, so many of which focused . . . on sin and guilt, healing and redemption.” To Black this was a way of dealing with what could not be said. “While Germans,” she relates, “did talk, obsessively, about their own losses in the war, there were many other things they simply did not discuss, at least not publicly: allegiances to the former regime, participation in antisemitic persecution and looting, genocide, war crimes.”

In saying nothing about past atrocity, they say everything.

That silence was real enough, and it is reflected in 1950’s Ferdinand, The Man with the Kind Heart (Ferdinand, der Mann mit dem freundlichen Herzen, reviewed in last month’s Fiction chronicle), by Irmgard Keun, whose work had been banned by the Nazis. In a way, this was a state-of-the-nation novel, and its characters can, in some senses, thus be regarded as representative of the era. In saying nothing about past atrocity, they say everything.

In Ferdinand, one of those characters, a Herr Liebezahl, “draws horoscopes, reads palms, swings crystals, lays cards, [and] sells amulets” and, in what were extremely hard times, makes a decent living doing so. Meanwhile, the eponymous hero, Ferdinand, mockingly refers to a “miracle worker,” the “Brylcreemed Gröning.”

Bruno Gröning (1906–59), who did indeed have longer, more coiffed hair than was typical for a man at that time (“a womanish lion’s mane,” jeered a reporter for Bild) plays a central role in ADemon-Haunted Land. Within its pages, Black recounts the saga of this faith healer who became one of the most famous figures in the nascent West Germany, attracting an enormous following after seeming to cure a boy who could barely walk (unsurprisingly, it turned out to be no more than a reprieve).

An unexpected passage in which Black supports the idea that American tales about haunted Indian burial grounds are, even today, an expression of sublimated settler fear “that vengeful ghosts will come back and reclaim what’s theirs” suggests that she cannot always resist overinterpretation. Nevertheless, her thesis that Gröning both conjured up the spirits of the past and alleviated a portion of the pain that they had left behind is convincing. She quotes a journalist who watched Gröning speak from a balcony just outside Munich in 1949. Faces in the crowd “furrowed with worry and suffering” were “magnetized” by “this unimposing little man” with “piercing blue eyes.” He wore wrinkled, threadbare trousers and a dark-blue shirt buttoned all the way up, a “kind of uniform,” writes Black, evoking memories reinforced on the occasions when klieg lights illuminated the balcony, adding, one way or another, to the enchantment.

Perhaps revealingly, Gröning resorted to a charlatan’s props (he would hand out small tinfoil balls that supposedly conducted his “healing current”), and how much this undeniably strange individual genuinely believed his own spiel remains, for me, unresolved. He does appear to have “cured” people, but, asks Black, of what? At a guess, maladies that were psychosomatic in origin, easy pickings for a charismatic Wunderdoktor and fairly common, presumably, amid the ruin. Black, however, digs deeper. In her view, Gröning was “invented” by this society “to cure what ailed it—not just disease and injury, but forms of disquiet and damage that were much harder to see.” To the extent Gröning’s activities included a quest for “redemption,” as Black maintains, it was very rarely made clear for what. Gröning repeatedly spoke of the malign effects of evil, a term he at times described as a turning away from God, and at others left vague. But there was no specific discussion of what Germans had so recently turned to. Gröning had been a Nazi party member himself, and his affairs were managed for a while by a former officer in the SS.

It has, Black notes, been argued (controversially) that drawing some sort of veil over the Hitler years was a necessary precondition if a country that contained Nazis, those who had opposed them, and many who were in between was to pull itself together. In some respects that anticipates Vladimir Putin’s approach to the Soviet past. But the differing outcomes in West Germany and Russia owe much to Germany’s military catastrophe, a continuing occupation by the victors, and the trials of a number of the old regime’s most prominent monsters, none of which Russia has undergone. These all combined to form guard rails that, in the German case, were surely essential. After all, the majority of those responding to a 1948 poll in western Germany and west Berlin saw National Socialism as a good idea that had been poorly executed. Black does not mention that, but she does demonstrate just how far that helpful silence was taken. Her depiction of the Bonn republic’s rush to a general (and appallingly broad) amnesty for crimes committed during the Third Reich indicates that something more than a very chilly pragmatism was involved.

Black effectively and evocatively contrasts the story that this new democracy was telling about itself, a narrative of rebuilding and recovery, with what lay below its increasingly shiny surface. While Gröning was merely one of history’s countless faith healers, his rise at that time and in that place is suggestive, at least, of something. That is also true of other phenomena—including apocalyptic scares, front-parlor exorcisms, and numerous sightings of the Virgin Mary, various saints, and incarnations of Jesus.

The spike in witch trials or, more accurately, the prosecution of those who had accused others of witchcraft, a topic to which Black devotes significant space, arose out of a mixture of ancient superstition (the effect of an allegation could be devastating, even if the “witchcraft” bore scant resemblance to the fantasies of earlier centuries), score-settling, and social fragmentation (90 percent of those asked in a 1949 survey replied that most people could not be trusted).

The profound chaos generated by the sheer scale of Germany’s defeat can go a long way to explaining why so many—as the bewildered and the traumatized frequently do—looked to the supernatural for comfort. I suspect that the same, paradoxically, could be said of the widespread belief that the country was being punished by God. This is a familiar enough thought at a time of disaster, great and small, but it is difficult, after reading this book, not to think that it was often another evasion of responsibility, rather than an authentic acknowledgment of guilt. Divine wrath can be followed by divine forgiveness, offering the prospect of an escape route that was spiritual rather than rooted in earthly reality. An honest reckoning with the past could be safely postponed until later. And in Germany it was.

Andrew Stuttaford is the editor of National Review’s Capital Matters. 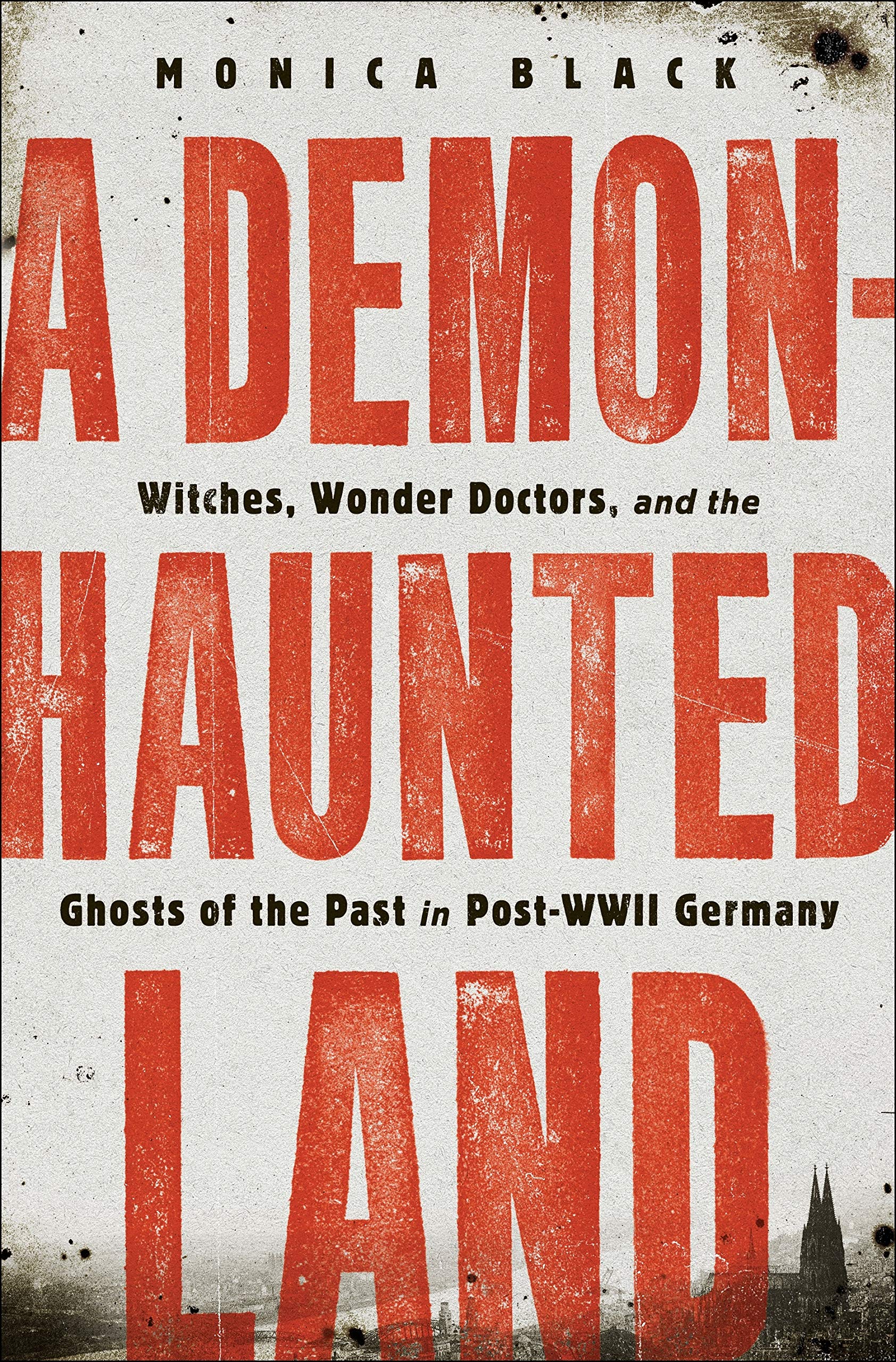 The slow & the dead & other authors

The sound of silence by Andrew Stuttaford