Green Park is, improbably, the park in which I’ve spent the most time over the course of my life, despite only having lived in London for a year. It’s not that the park, pleasant though it is, held any special place in my heart. There was no mystical attachment. It was simply the most efficient way, by foot, to get from my flat in Pimlico to the London Library in St James’s Square, where I did most of my work in graduate school. The route took me over the Elizabeth Bridge, which left me in plain sight of the Victoria Coach Station, a sort of equivalent to New York’s Port Authority Bus Terminal in interior character, though a far more attractive building, dating from the 1930s and furnished with a reticent deco façade. (There I once waited for the bus to Cheltenham to watch the horse races; I should have taken the train.) Over the bridge, a right onto Buckingham Palace Road set me on my way towards Central London, taking me past Victoria Station on the right. The station is a far way from its days as a semi-glamorous point of origin for the boat train to France, evoked so memorably by Henry Green in his 1939 novel, Party Going. When I lived in London, it was mired in continual construction dust, which seemed to have abated the last time I was there, in late 2019, though the glass-and-steel forms that have risen in place hardly warm the heart. At left are the outbuildings to Buckingham Palace, most notably the Royal Mews, whose entrance gate’s coupled columns, winningly rusticated and topped with a lion and unicorn, give the space a suitably martial air. Then I would pass the Palace itself, dodging tourists and their exercises in amateur photography, crossing Constitution Hill into the smallest of London’s royal parks, what was once “Upper St James’s Park,” now “Green Park.” A small incline brought me past elegant surviving Georgian houses, through a small passage to Cleveland Row, onto St James’s Street and its eighteenth-century air, through to King Street, past Christie’s London headquarters, and finally onto St James’s Square itself.

All these memories arose while reading Andrew Jones’s The Buildings of Green Park, a delightful tonic of a book that is a cheerful antidote to current proscriptions on international travel. The book is the result of Jones’s own peregrinations, undertaken in 2020 (dread year!) as Britain was subjected, like much of the world, to “stay-at-home” orders, commonly known as “lockdown.” An international lawyer by trade, and clearly an industrious sort, Jones decided that he would use the time normally spent commuting to his office to walk in the park that abuts his home (he lives on Piccadilly). Determined to learn about all the buildings that face Green Park, he set a goal of writing about one building a day. The result was a series of posts on Instagram, the digital photograph-sharing service, and, eventually, a handsome hardcover book that contains potted biographies of not only the buildings, but also the monuments within or facing the park. All of us who pledged, when our masters sent us inside, to clean out our sock drawers but still haven’t done so must feel rather foolish in the face of Jones’s achievement. The book, in addition to being cheerfully informative throughout, is a model of design. From the cloth spine with embossed gold lettering, to the labeled map preceding the text, down to the attached ribbon bookmark and the index and bibliography, the book fulfills all its remits—at once an attractive object and a useful primer on an intriguing, especially private bit of London.

Green Park’s fifty-one acres were first enclosed by Henry VIII, but it was not until 1688 that the park was surrounded by walls. Even then, its boundaries remained unfixed, with the northeast corner sold to become Arlington Street, and more land subsequently added to the west. But it was the eighteenth century that gave the park its cachet, with the Queen’s Walk, named for Caroline of Ansbach, the wife of George II, laid out in 1730 along the eastern edge by Charles Bridgeman, the pioneering garden designer. Soon thereafter grand noble houses began fronting the Queen’s Walk, many of which still stand today and give the park its graceful bearing.

Spencer House (1756–58), built for John Spencer, later the first Earl Spencer, was the earliest major house to have its principal façade face the park rather than St James’s. Its initial architect, the capable but now-forgotten John Vardy, gave way to the fastidious James “Athenian” Stuart, who, when later building 15 St James’s Square, disparaged his tradesmen, imploring them not to “murder” his column capitals. With its massive seven-bay façade and rich detailing, it set the tone for architectural extravagance next to the park.

Lancaster House (1825–41) only has six columns in its portico, but its nine bays declare its splendor forcefully. The house was begun for the Duke of York, George IV’s brother, but royal debts forced a sale to the second Marquess of Stafford, who later became the first Duke of Sutherland, famed for his wealth. Queen Victoria allegedly told his wife, “I have come from my House to your Palace,” which gives a sense of the scale. But it is the honey-colored Bath stone of the façade that really captivates, a soft golden color I remember well from my time in London. Jones thinks so, too, admitting that “seeing its Bath stone façade glowing in the early morning sunshine became one of the great pleasures of my daily outing during Lockdown.” Leased for free to the British government since 1913, the house has since 1922 held the Government Wine Cellar, amounting to 39,000 bottles, which also gives a sense of the scale.

The final individual mansion to be built on the park, Bridgewater House (1845–48) is a massive Florentine palazzo by Charles Barry, reminiscent of the architect’s Travellers and Reform clubs of Pall Mall, though exceeding both in grandeur. Jones captures charming details like the “Groom” and “Coachman” doorbells still present at the house’s back entrance, as well as the expansive formal garden, which can just be glimpsed from the Queen’s Walk, especially in winter, when the trees are denuded of their leaves.

At the top of the Queen’s Walk, at the corner of Piccadilly, stands the Ritz Hotel (1903–07), which Jones describes as the Walk’s

apogee . . . a little piece of the arcade in the rue de Rivoli and a large dollop of the court of Louis XVI, miraculously landed on Piccadilly, with almost non-stop crêpes suzette within, an eternal flame for Margaret Thatcher who died here on 8 April 2013 after being generously accommodated by the Barclay brothers, then the owners of the hotel.

A solid piece of architecture, as all landmarks should be, the Mewès & Davis–designed hotel “has an unusually strong structure due to building regulations not having caught up with technology: it is the first large steel-framed building in London but also (at the insistence of the local building authority) supported by its cladding system.” This belt-and-suspenders approach allowed it to weather multiple bomb hits during World War II, as dramatized in Anthony Powell’s Dance to the Music of Time. Indeed, numerous scenes throughout those novels take place at the Ritz, which evinces a magnetic quality in the books, much as the actual building does today. Who can forget the scene in which, at an old boys dinner in a basement party room, the bloviating Widmerpool’s “uncalled-for speech” begins with a “kind of involuntary grunt” and ends with his former housemaster Le Bas “knocked . . . out cold” after an apoplectic fit? For Powell people, real life is always seen through the lens of the novel, not the other way around.

Jones’s book is full of delights, even for the seasoned visitor to the environs around Green Park—the man who knows his Justerini & Brooks from his Berry Bros. He notes the ornamental ship’s prow at the corner of 81 Piccadilly, suggesting it refers to the Royal Thames Yacht Club’s former occupancy of the site. While the Pevsner guide ignores this winsome detail, Jones furthers our appreciation of the building and its history, recounting how it once served as the location of Watier’s club, “founded by the Prince Regent during a dinner party at which members of Brooks’s and White’s were complaining about having to eat endless boiled fowl in oyster sauce.” The Hard Rock Cafe—which a friend maintains is the best place for a clandestine meeting in London, as no one you know will be there—is all “soaring exuberance, that orgy of decoration, those stripes, and also that zany discipline.” We can well understand why the Pevsner guide calls the building, built in 1905 as a mixed commercial and residential development, a “remarkable freak,” and sympathize with Edward VII, who complained that it spoiled his vista across the gardens of the Palace.

Jones ends his tour with a feature of the Park I’d never noticed, though one fitting for what Pitt the Elder called one of the three “lungs of London.” Jones names it the “Pantheon,” a circle of trees 142 feet in diameter, exactly the same as the famed Roman dome. These trees, the remnants of a long-lost enclosed bandstand, create a canopy with a circle open to the sky—an oculus, as it were. I’m eager to get there, and soon I hope. In the meantime, we have Jones’s book, which he calls “a memento of the strange confinement brought about by covid-19”: scraps, though appetizing ones.

Benjamin Riley is managing editor of The New Criterion. 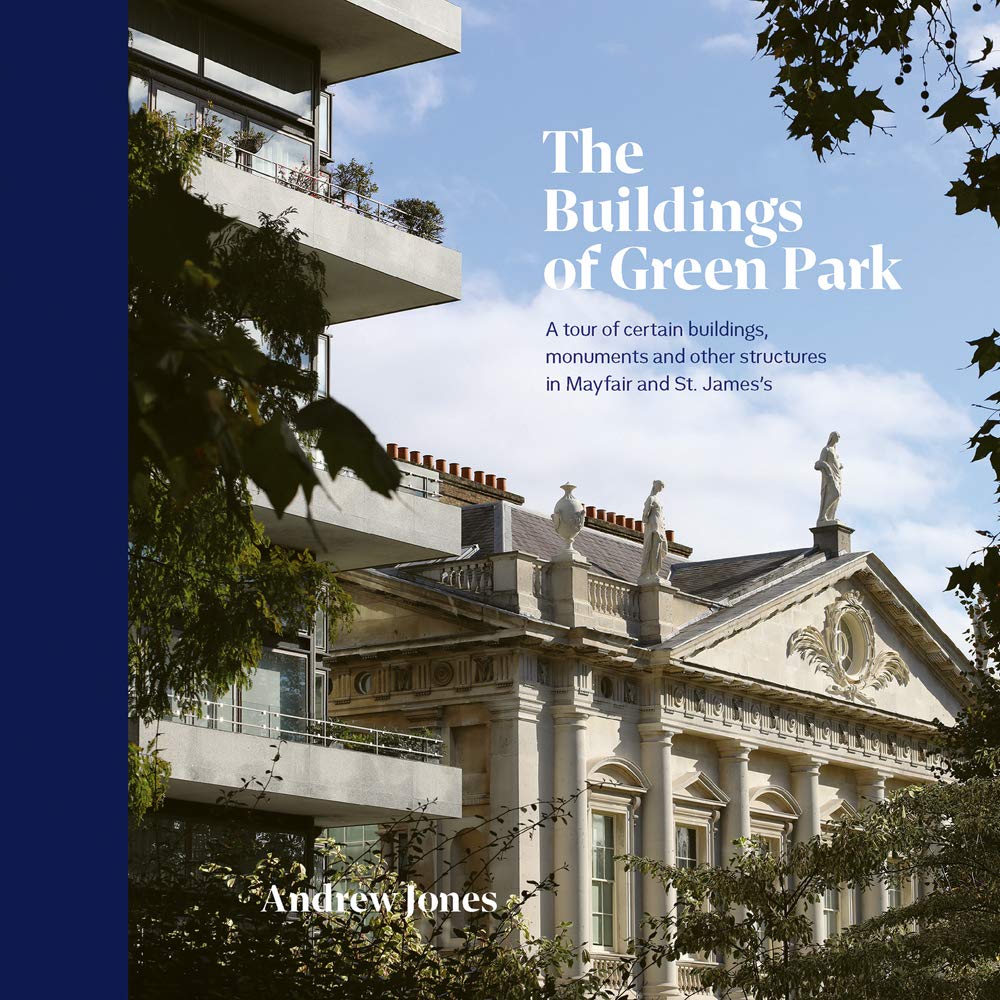 The Buildings of Green Park