Life with Louis by Brooke Allen

When Nathaniel Kahn released his 2003 film My Architect, a biographical portrait of his father, the architect Louis Kahn (1901–74), the architecture world and people who care about such things were astounded at the personal and financial chaos within which the great man designed and constructed his famous edifices. Kahn was a late bloomer: it wasn’t until the 1950s that he received his first important commission, an extension to the Yale University Art Gallery, and was recognized as being potentially a major talent. Big commissions followed: the Richards Laboratories at the University of Pennsylvania; the Salk Institute at La Jolla; the Indian Institute of Management in Ahmedabad, India; the new capital of East Pakistan at Dhaka, which by the time of its completion had become the capital of a new nation, Bangladesh; the Kimbell Art Museum in Fort Worth; the Yale Center for British Art; the fdr Memorial at Roosevelt Island; and myriad other projects he labored over but which for one reason or another fell through. All this he took on during the last twenty years of his life, while his business was bleeding cash and he was also juggling and trying to keep separate three different families, all in the Philadelphia area: his “official” one with wife Esther and daughter Sue Ann; a nearby ménage consisting of an ex-lover, Anne Tyng, and their daughter Alexandra (b. 1954); and his long-time, semi-detached partner Harriet Pattison—twenty-seven years Kahn’s junior—who was raising their son Nathaniel (b. 1962). “It occurs to me now,” Pattison muses in her revealing new memoir Our Days Are Like Full Years, “that this was a kind of living equivalent of the way he sought a strong distinction between spaces in his architecture.”

A professional landscape architect who has collaborated with numerous architects including Kahn himself (the Kimbell, the fdr Memorial), Pattison is well equipped to discuss Kahn’s professional life and his art, and she has interwoven her narrative with reproductions of letters from Kahn, photographs, architectural drawings, and other relics of his time with her (1959 until his death in 1974). It was the most productive period of Kahn’s life, and he was constantly on the move, sending Pattison love letters, sketches, and postcards from airport lounges and hotel rooms all over the world. She would imagine, she recalls, “how wonderful it would be to live together and have a family—although when I tried to talk about specifics, Lou would fall silent or say something poetic that effectively put the discussion off.”

Pattison always considered Kahn the love of her life and made no effort to move on, as her predecessor Anne Tyng had done, when it was clear Kahn was not going to leave Esther:“He said little about his marriage, other than that he had made a mistake. I knew this could hardly characterize thirty years of connection, but it was what I wanted to hear, and I accepted it.” When Pattison and Kahn began their relationship, she was working as an assistant at Parke-Bernet Galleries, but she soon abandoned that: “How meaningless was that world of trading possessions compared to the unbound world of making art that was Lou’s!” The trajectory eventually led her, with Kahn’s help, to landscape architecture. Kahn would come to visit her when he could, but she went long stretches without him. “I didn’t want to end up like a character in an Edith Wharton story, the lover of a man who showed up at his convenience,” she writes, but on some level that’s how it turned out to be.

If anyone needs reminding how much the world has changed since 1962, they have only to look at the reaction of Pattison’s nice wasp family when she turned up pregnant and announced she was going to keep the baby. Her brother went completely haywire, created “a terrible scene” in Kahn’s office and a row outside his front door, with the unhappy Esther and Sue Ann listening from inside. Kahn himself tilted “between willful inaction and passive bewilderment.” His first reaction on hearing the news was to stagger and cry “Not again!”—not exactly an encouraging response for Pattison. Eventually he agreed to accompany her to a Jungian therapist who was, she says, “singularly unhelpful, vehemently denouncing Lou as a coward with shrieks of scorn.” No one, at that time, seemed to imagine that she could live a decent life with an illegitimate child, nor did anyone in her family consider the possibility of taking her in or helping to raise the baby: “They were all too afraid of compromising our family’s good name.” With Pattison approaching her due date, Kahn flew off to India, writing, “I will try to get the where with all soon. How to do it—well I’ll find a way.” By “where with all” he meant the money necessary to bring a child into the world, but of course this was never forthcoming, and in the end Pattison’s mother footed the bills and Pattison herself found temporary refuge with a kind couple in Massachusetts. “Lou’s marginal resources,” Pattison explains, “were limited to office petty cash furnished in twenty dollar bills. What I did not understand at the time was how much Lou’s life and work depended on Esther’s financing, and had since the beginning of their marriage.”

In those days architects had a heroic image: they were going to rebuild society, and human nature along with it. Corbu was still God. Sixty years on, with a sizable proportion of the globe trashed by the work of overweening architectural egos, that image has been indelibly tarnished. Pattison believed in it, though, and appears still to do so, and she let Kahn get away with much pusillanimous behavior (one can hardly help agreeing with the Jungian analyst!) because of his stature as visionary genius. This book, like My Architect before it, does not make Kahn seem a very noble character, but to some degree he was a visionary genius, and Pattison communicates her excitement about the work irresistibly. Kahn was of course capable of ugly structures (the fdr Memorial, for example), and brutalism, unless exercised with enormous taste and humanism, tends to be just—well, brutal. But Pattison got a thrill from being part of the creation of the Kimbell, the Yale Center for British Art, and the big projects on the Indian subcontinent—as well she might have done. Kahn was not a particularly good writer: he makes points, writing about architecture, that are frustratingly airy and hard to grasp; but one is made aware, in his notes included in this book, of the strenuous effort, the integrity of his vision, his painstaking struggle to let the soul of the building express itself, to discover “what the building wants to be.” His life, Pattison writes, was “a lone, ambitious quest for transcendental ideals Lou believed in and sought, like a knight seeking the grail.” Her accounts of Kahn’s failures are as interesting as those of his successes. For two years he tormented himself over striking the right note for the new presidential palace at Islamabad: he believed that form should follow function and did not believe that domes were functional for a place of assembly. “The logical use of the dome is dependent on the total order of the spaces which they crown.” But the Pakistanis wanted domes. It was, after all, to be a new capital for a specifically Islamic republic. When after much struggle Kahn was finally fired, he took it very well. “The hell of it is that they detected what I felt about my own design—no conviction.” Similarly, when his design for a Holocaust memorial at Battery Park City was rejected as looking too pagan, he acknowledged the criticism. (A design for the Hurva Synagogue in Jerusalem was also condemned as pagan, interestingly.) Of all his clients, he felt most connection with the Indians, and he worked happily with them throughout the iim project. “The Indian people understood him. He was not ‘idealistic’ or ‘impractical.’ He was an artist and a teacher in search of the truth, as best as he could find it.”

As Kahn’s second daughter, Alexandra Tyng, grew up, she decided she would no longer passively accept her place in the background of Kahn’s life. At sixteen she reached out to Pattison and her young half-brother Nathaniel, and the siblings became a family unit. It was an alliance that eventually came to include the eldest half-sibling, Sue Ann. (Sue Ann is now a flautist, Alexandra a painter: all three children followed their father into careers in the arts.) Pattison herself became friends with Anne Tyng. “We enjoyed how [the children] became close and were united in our belief that they should not be excluded from his public world, which indeed they were.” When in 1970 Kahn was awarded the prestigious Philadelphia prize—the ultimate honor from his home city—neither Alex nor Nathaniel was invited to the ceremony, but Alex boldly telephoned Kahn’s office and requested tickets, and the two young people went together. Esther studiously ignored them at the reception, but Kahn did not, and it was the beginning of the children’s at least partial integration into Kahn’s official life, and family. In the meantime Kahn, bizarrely, had welcomed Pattison, with whom he was now collaborating on projects, to move into his office—an arrangement he didn’t inform Esther about. Pattison was stashed in a “fourth-floor hideaway adjoining the storage area,” the door of which she kept bolted against Esther’s monthly visits, when the visiting wife would rattle at the door and loudly ask everyone why it was locked. “Nathaniel commented that I acted ‘like you’re living in somebody else’s house.’ But I was confident that I belonged, and I knew that Lou needed me.”

In some ways Harriet Pattison’s story, unusual as it may seem, is a classic one for a woman of her generation. Born in the late 1920s to a highly respectable family, she came of age just before the sexual revolution that would have made her life as a single mother more acceptable; by the time it arrived, as it did a few years after Nathaniel was born, her situation had been permanently constricted by the awkward bargains she had made with Kahn, her family, her society. Her book is often painful to read, as it all seems to have been take, take, take on Kahn’s part, and give, give, give on hers. Even at his funeral (he died, sadly for a man who spent his life contemplating the architectural sublime, in the men’s room at Penn Station), Pattison was excluded: first disinvited by Esther and then, when she came anyway, relegated to a side room away from “the family.” And yet she very clearly believes she did not get a bad bargain. She was able to maintain her relationship, at whatever emotional cost to herself, with the one man she loved; she was given a son; she was fortunate enough to be able to take part in the great architect’s works, not only as a sounding board but as a collaborator. It’s a fascinating psychological study. Like Nathaniel Kahn’s My Architect, this memoirsets out to paint a portrait of Kahn and ends up being, instead, a surprisingly revealing self-portrait.

Brooke Allen writes frequently for The New Criterion and other publications. A former Professor of Literature at Bennington College, she now teaches in its Prison Education Initiative. 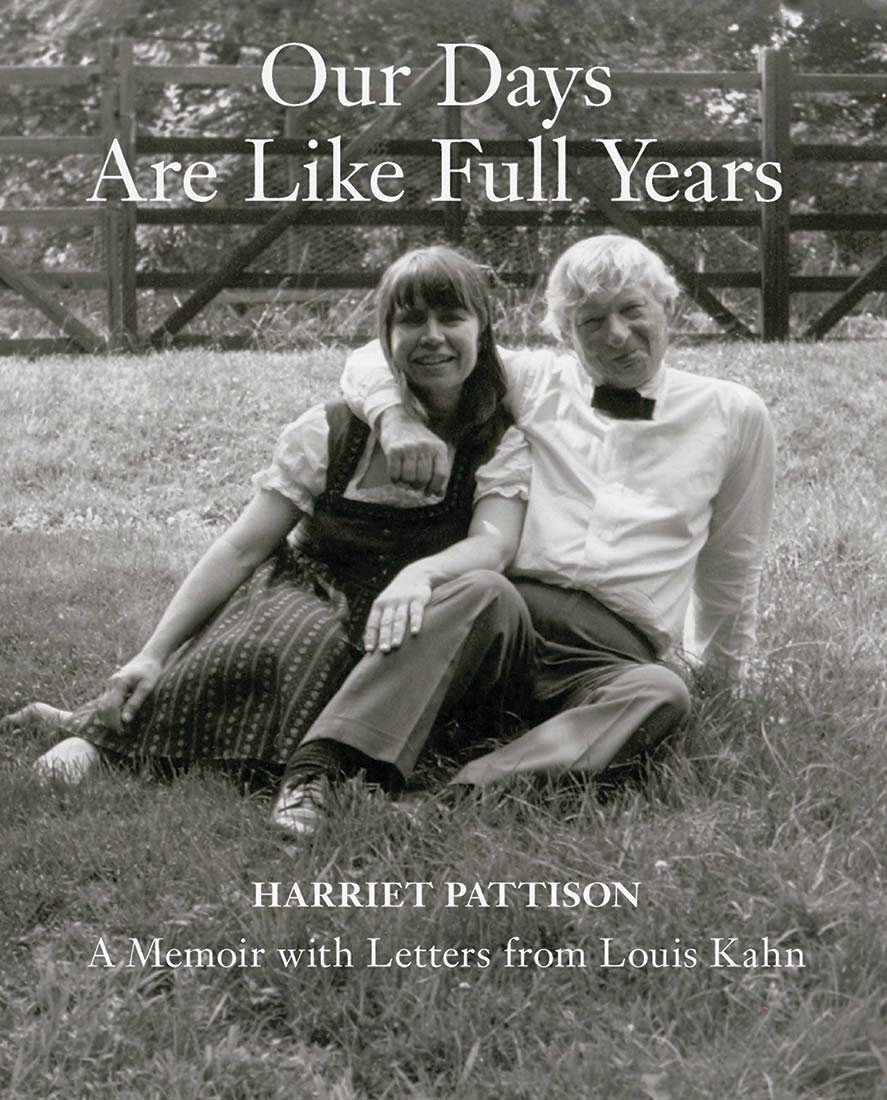 Man on a mission

Philip Roth’s plot against himself

Life with Louis by Brooke Allen