Well, were you taken in? Did you ever believe in the New World Order of the “progressive Left”? And there is no let-out if you voted for Clinton or Blair, because then you were taken in.

No, I thought not. Nor was I, nor was Roger Kimball, nor were most of the subscribers of The New Criterion, a beacon of sense in the midst of the waste of shameful stupidity.

So, what quite is the point of reading yet more about this stupidity, and notably so when the book under review originally appeared from a publisher (Hurst) that seems generally to be run on a partisan basis? I write knowingly: to quote from an email of May 2018 sent to me from Hurst’s Managing Director, rejecting a contracted book that had the temerity to say something supportive of past imperialism: “While your manuscript has many merits, and you are a wonderful historian, I must tell you honestly that it would distress me to publish it, such that I would not be able to sleep soundly at night or look many of my dearest friends in the eye.”

However sugarcoated, this is a form of censorship by sentiment. On a happier note, I kept the advance and the book appeared as Imperial Legacies (Encounter), so readers can judge it on its merits. One wonders, however, how many other books and authors have been closed down on a similar basis. Of course, Hurst is quite careful to publish works that strike me as highly tendentious if they meet its anti-imperial and anti-Brexit criteria.

Yet this work by Jones is worth reading because it is interesting on the development of many of the more foolish ideas of the present day. In particular, it takes the supposed universal verities of progressives and ruthlessly reduces them to a particular conjuncture. Now that again will come as no surprise to the readers of this magazine, but it is an argument worth underlining because the “culture wars” are now very much to the fore. One side engages with the presentation of the past in light of a view of the present, and with the present fueled by a grievance of the past, to coin a phrase. Both of these culturally weaponized processes are directed to determining the future.

Again, you might think this has all been settled. How many pieces do we have to read to appreciate that “decolonizing” the canon, the curriculum, the past, the present, existence, and the universe is an intellectually bogus exercise: conceptually arid, pedagogically valueless, and as interesting and fruitful as eating mud (a project similarly reserved for little children; though at least children can spit their mud out). Would that it were so. As I was writing, however, I noticed that the “Education Report” on May 15 produced for the regular administrative meeting of my former university department included: “Decolonising the Curriculum: Nandini Chatterjee and Stacey Hynd have suggested that the department should establish a Decolonising the Curriculum working group. Nandini would like to work with History UK, with a view to running a series of national events, starting this summer, to produce resources that academics can use in their teaching and research,” and so on.

You might see sub-texts in terms of norms, admonitions, and, heaven forbid, ambitions. I could not possibly comment, but, given the title of Jones’s book, it is particularly interesting to consider the agenda of so many historians. Jones, instead, assesses what he correctly presents as “the erosion of academic integrity.” In it he analyzes “the decline in academic standards and the consequent research bias towards progressive normativity, and a default position critical of Western democratic states and their traditional institutions.” The culture of grant-giving institutions comes in for particular criticism from Jones, and rightly so. His comments could be amplified if looking at departments of History, English Literature, or, indeed, academic life as a whole. Moreover, Jones is happy to name names, as in “it was perhaps Tony Blair’s favourite philosopher, Anthony Giddens, who best exemplified the manner in which academic theorizing about the post-historical world could link theory to policy and establish its otherwise abstract concerns at the core of public and foreign policy. . . . The embedded utopianism of the third way thus replaced an outdated world historical materialism.”

This account could be sharpened in terms of historical tensions within the Left, tensions that continue to the present. At the same time, there is room for an analysis of a shared spoils system in which mediocrities of the soft Left gain status and dispose of grants to their chums’ profits (a process then fully reciprocated), while the hard Left is free to advance its agenda as long as it pays some obeisance to the platitudes of the administrators of the soft Left. That, indeed, is “decolonizing” the syllabus. It fulfills that bargain and finances a world of grants, backscratching, mediocrity, and what Jones correctly stigmatizes as academic entrepreneurship.

We can of course respond simply by treating this process with the total contempt it deserves, and/or exercise scholarship in anatomizing the patronage networks of bodies such as the “Research” Councils considered by Jones, or bodies such as the British Academy which are part of this pompous edifice, all of which gives us a new age of dullness of the type brilliantly satirized by Alexander Pope. Laugh and move on is psychologically possibly the best remedy, but universities should be a resource for society.

Well, maybe less than we think. The processes of education and opinion-discussion offered outside the academy have many defects, but, with many universities increasingly lowering their standards, there is a degree of overlap. An informed paper from a perceptive think-tank is worth far more than a piece of theoretical claptrap from an academic, and costs society and the state far less, while, more generally, much excellent work comes from non-academics. Jones’s criticism of the European Research Council and other such bodies invites consideration of whether such state-funding could not better be spent on other purposes, for example tackling illiteracy. Universities might consider more teaching and two-year degrees, rather than the present holiday camp for the poorly motivated; I speak of course of the staff. It is difficult to know what to make of institutions where teaching is provided for less than half the year.

Jones notes the problems created by the Left’s quest for utopian outcomes alongside the abject failure to understand the granulated and historical character of the world as it is. For conservatives correctly anxious to resist in the culture wars they are frequently losing, it is necessary to have this understanding. Unless policies are put in place that address the specific advantages enjoyed by the other side, we will continue to lose badly. Ultimately, both Jones and I, in different ways and from diverse backgrounds, offer similar accounts of a crisis in an important part of our culture, a crisis in which the conservative parties in the West generally stand back, in part because they do not wish to challenge institutional autonomy, however much the latter might serve to foster clear ideological formulations. It really is not good enough. Maybe the last laugh is to be had by the decolonizers and their like. We, after all, are funding their nonsense.

Jeremy Black has recently published The Importance of Being Poirot (St. Augustine’s Press) and England in the Age of Dickens (Amberley Publishing). 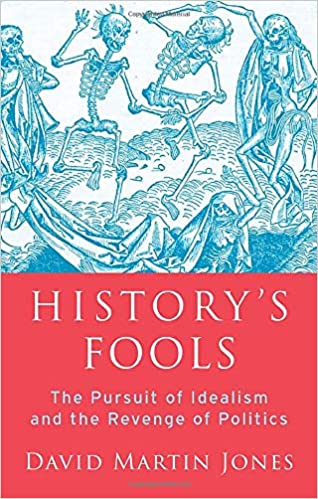