Inventing the authority of a modern self by Daniel J. Mahoney

The distinguished contemporary French political philosopher Pierre Manent has spent four decades chronicling the development of modern self-consciousness, including the flight from human nature and “the moral contents of life” that define modern self-understanding in its most radical forms. Manent’s work combines penetrating analyses of great works of political, philosophical, and religious reflection with judicious independent thought. In both, he illumines the interpenetration of politics and the things of the soul. That dialectical melding of politics and soul permanently defines the human condition, even in the most remote times and climes.

Many readers over the centuries have succumbed to Montaigne’s considerable charms and deeply impressive artistry.

Manent continues that work with learning and grace in 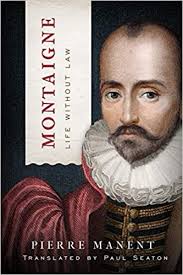 The demanding & delicate task of conservatism

Inventing the authority of a modern self by Daniel J. Mahoney