There are those clubs you want to join and those you can get into. That is the great divide in Clubland, and the Athenæum, in London, is clearly and proudly among the former (though I somehow managed it). Founded in 1824, it broke the mold, with members chosen on the basis of their achievements rather than their background or political affiliation. That had been an ideal in eighteenth-century Britain, and notably so for a major source and focus of clubbability, Freemasonry, which was launched in London in 1717. But the Athenæum clothed the concept with magnificent surroundings, continuity, and a public role to match its private sociability. Michael Wheeler, a distinguished scholar of nineteenth-century British religious belief and a professor of English literature, has provided a study both scholarly in a searching fashion and also witty, droll, and page-turning. His focus is not the inner life of the club, although that receives due attention, but, rather, its role and that of its members in public life.

He begins memorably with “Ballot Day 1892,” a large double-page pull-out supplement published the following year to accompany an article on the club in the Illustrated London News. A worked-out drawing, this group portrait of fifty-nine individuals is, as Wheeler shows, a snapshot of Victorian intellectual society, one that is sufficiently confident to include neither of the Party leaders, one (Salisbury) a member, the other (Gladstone) a frequenter. Instead, we have clerics, including the two archbishops; lawyers, including the Lord Chief Justice; scientists, including Huxley and Kelvin; artists, including Alma-Tadema; musicians, including Hallé and Sullivan; historians, including Lecky, Seeley, and Stubbs; and many more.

“A Club for literary and scientific men, and followers of the fine arts.”

The club was founded by John Wilson Croker, the ultimate know-it-all and social butterfly of his age. Indeed, visiting London in 1826, Sir Walter Scott, an original member of the club, dined on November 15 with the Duke of Wellington, where the party included the Peels and Croker; the next day as the guest of Croker, with five cabinet ministers present; and two days after that at the Peels’ house with the Earl of Liverpool (the prime minister), the Duke of Wellington, Croker, et al. In 1823, Croker had outlined his idea in a letter to Sir Humphry Davy, the first club chairman: “a Club for literary and scientific men, and followers of the fine arts.” Later that year, he returned to the theme, one that captured the distinction between the old eighteenth-century gambling houses of St James’s Street, notably Boodle’s and White’s, and the more serious new nineteenth-century clubs on Pall Mall with their focus on interest groups: “The persons eligible to this club shall be Authors known by their scientific or literary publications; Artists of eminence in any class of the fine arts; and Noblemen and Gentlemen, distinguished as liberal patrons of science, literature, or the arts.” As Wheeler brilliantly demonstrates, the Victorians lived up to the image.

Talent was a key element, and much of that of the age was on display, from Turner to Dickens and Mill to Darwin. Jews and Muslims became members. The controversies of the age also intrude. Thus, W. T. Stead’s 1885 articles in the Pall Mall Gazette on “The maiden tribute of modern Babylon,” concerning the trafficking of young girls, led to the club discontinuing their subscription to that paper.

Wheeler is a deft guide through the succeeding decades, noting Max Beerbohm’s comments about “stodgers” at the club, but also recounting the extent to which the club in the 1920s and 1930s retained its ability to attract leading figures, whether writers such as John Buchan and Lytton Strachey, multipurpose committee men such as John Reith of the bbc, and politicians such as Stanley Baldwin and Ramsay MacDonald. When monthly “Talk Dinners,” as they came to be known, were first held in 1926, the choice of subjects reflected an engagement with leading issues of the day. The first principal speaker, Sir Austin Hopkinson, is not a household name today, but he had invented a revolutionary coal-cutting machine, ran an engineering firm, and was an MP. His subject was “Coal.”

In 1947, the recently elected Arthur Bryant proudly described the London clubs as “where the secret power of England is so clearly revealed.” The club survived the war, keeping calm and carrying on, though also attracting comment, as from Percy Colson of White’s:

I lunched there in 1940 and after a revolting meal, my host said: “Let’s have a liqueur with our coffee to take away the taste of the food.” (The coffee, incidentally, had no recognisable taste.) We asked for Grand Marnier, Kümmel, Cointreau, Benedictine—they had all disappeared, probably down the throats of the Bishops. Finally we managed to obtain a very inferior cooking brandy.

Members were killed in German bombing and died in military service. Many played a major role in the war effort, but the conflict hit the Athenæum as well as Britain, and after the war there was a general decline of Clubland, not least in the face of high taxation. Several clubs closed, and in 1952 the possibility of the Athenæum amalgamating with the Travellers next door was seriously considered. Inflation became a major problem from the 1950s on, and there was growing concern about the standards of catering and bedroom provision, the latter of which was compared in The Times in 1953 to the maximum security prison for the criminally insane at Broadmoor. The club’s physical premises, a solid cream-painted edifice with Greek details at the corner of Pall Mall and Waterloo Place, had also become seedy.

Nevertheless, its membership was still mighty, indeed in the 1960s and 1970s the home of a professionalized “establishment” that had been shaped by two world wars, bearing the mark of an irreversible shift of power away from the landed aristocracy coupled with the expansion of the middle class. The club’s members ranged widely, including not only Harold Wilson, but also both Maurice Oldfield—the head of MI6 and an habitué—and the traitor Kim Philby.

High thinking and plain living continued to be the pattern in the 1980s, with the club not a beneficiary of the financial revolution of the Thatcher years and, indeed, hit by financial problems. As in so much of Britain, the roof leaked. From the 1990s, the focus shifted to improving the club’s facilities and finances, not least through a major and successful effort at making it a place to dine. The bedrooms were refurbished and women admitted as members of the club—the two developments less linked than that remark might suggest.

Better facilities have a consequence, and recent years have seen a steady increase in the cost of dues. In 1948, Lord Simonds, the chairman, pointed out at the Annual General Meeting: “some of our members are rich and are willing to pay more for their meals, but most are not rich and have to be careful in their expenditure.” Now that point has been sacrificed, and the costs of the Talk Dinners that Wheeler justifiably praises put many off. The changing membership is instructive here. Wheeler notes that there are very few MPs any more, which is partly because they are very busy, but also because their salaries are relatively low given the club dues; the two I know who are members are both childless and with working spouses. So also with academics: Wheeler is kind about vice-chancellors, but most are bureaucrats, not intellectuals, and the ability of the club to continue attracting those of the latter who lack private income or quango-like appointments is unclear.

And so to the present: before the covid lockdown there were already problems over membership numbers at the Travellers, but the Athenæum was in a good state, helped by the low inflation, low interest rates, and low taxation of the 2010s. The interminable covid lockdown has led to a major fall in income and to concern about whether membership from outside London will hold up. The club’s reserves have enabled it to go on paying its staff, but there are worries about 2021.

Wheeler’s excellent study has much to offer. Scholarly, handsomely produced, and well-illustrated, it is like the club, but whether the latter can maintain the quality of membership of its first two centuries is very unclear: all too often an impressive office hides a timeserving mediocrity. But as an account of the past, do read this book. It can also be read in counterpoint with another work of Clubland that I have recently enjoyed, Nigel à Brassard’s Drones, Bath and Buck’s, an amusing account of how P. G. Wodehouse conceived of the Drones Club, and one that reminds me that Bertie Wooster, in Ben Schott’s excellent Jeeves and the King of Clubs, gets to have an adventure in the Athenæum that I hope will be in Wheeler’s second edition.

Jeremy Black has most recently published Tank Warfare (Indiana University Press) and A History of the Second World War in 100 Maps (University of Chicago Press). 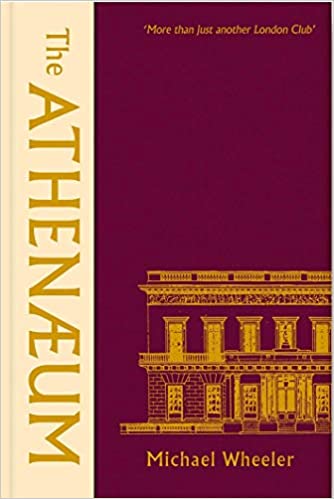 The Athenæum: More Than Just Another London Club

III Bacon’s theater of the absurd by David Yezzi

V The Popes’ art, out on loan by Creighton Gilbert

Same as it ever was