Same as it ever was by Jeremy Black

With TheNew York Times seemingly leading a crusade to besmirch America’s past (and therefore present?), discussion of that heritage is clearly a matter of the present-day culture wars. As Jonathan Scott’s book, How the Old World Ended, demonstrates, those of an earlier era are also with us again. Much of his book would have sat comfortably with modish writings of the 1960s, for example by the Marxist Christopher Hill. Here we have a simplistic account of modernity and modernization, and, more generally, of causation. In a lumper’s dream, early modern Western republicanism is regarded as a crucial shifter bearing the weight of new concepts and methods that helped produce the Industrial Revolution. With the fundamental link being the influences of Dutch republicanism on mid-seventeenth-century England, republican ideology is seen as key on both sides of the Atlantic. The year 1649 is presented as inaugurating, in England, the “real ‘first modern revolution,’ ” with “history-changing economic consequences” and a radical transformation of manners. Words and phrases are swirled around in a heady, self-intoxicating mix of revolutionary change. The below is typical of the main text, neither introductory flourish nor concluding peroration:

Over two centuries the contexts of all of these revolutions linked old worlds and new. They coincided with, and helped to bring about, the decline of Iberian and the rise of Anglo-Dutch-French (North-West Atlantic) imperial power. They exploited and exacerbated military-fiscal overstretch, the risks attending which became increasingly grave between the sixteenth and eighteenth centuries as empires, states and armies grew larger, and the wars in question became global. The result was a political dynamic which was both destructive and creative, rooted in the making and breaking of both states and empires.

All of these revolutions were linked by culture . . . and ideology.

Sound plausible? Actually, it is rather crude and silly. The individual phenomena Scott sweeps through and then piles up as if proofs for his thesis were far more complex, multifaceted, and often ambiguous in their meaning than he allows for, and so even more with their connections. There is, for example—and this is by no means an exhaustive list—a minimization by Scott of the role of religion; an underplaying of the extent and significance of non-republican dimensions of the Dutch, British, and French revolutions, and indeed of their complexities and contrasts; a failure to devote sufficient attention to differences and discontinuities in republican thought; a fascination with a crude and naive account of modernity, modernization, and turning points; a running-together of cause, precondition, and precipitant in a reductionist and instrumentalist jumble of explanatory phrases; an excessive simplification in addressing explanations of economic development, notably so with reference to long-term trends; and a lack of willingness to engage with alternative explanations, and, thereby, to provide the reader both with suggestions and with the “agency” to consider and choose. Maybe, for example, you are convinced, like Scott, that England “modernized along Dutch lines,” but maybe you would like to wonder more about the divergence between the two economies in the eighteenth century and assess how far this reflected differences from the seventeenth and before. Maybe you wonder whether the decline of the Baltic looked so obvious from St. Petersburg, and so on, but Scott is not one to doubt, which presumably contributes to his certainty about present politics. At least he offered a reflection that finally appeared new to me: apparently “Brexit looks like an act of self-mutilation, like the Revocation of the Edict of Nantes.” I leave those who know about the willingness of Louis XIV to heed referenda and also the Brexiteers’ use of dragonnades to get their way to consider the general quality of insight this suggests.

Rather than having the easy task of itemizing problematic aspects of Scott’s book, let us address the more complex one of asking “How the Old World Ended.” Clearly, there was and is no single definition of this world. Moreover, there was no one narrative, chronology, or turning-point. As far as changing “the existing world order,” a phrase thrown out here by Scott, the following are all germane, but all took place at different moments: linkage by regular trade across the Atlantic; the beginning of the continual period of population increase; mass urbanization; the development of global political ideologies; the move to coal-based power systems; the mechanization of agricultural work. Those are just starters, for any book on “How the Old World Ended” would also have to address multiple viewpoints, variously national, chronological, political, social, economic, religious, and cultural.

Scott, as he makes clear, locates his in a very specific academic-intellectual context, and would I am sure accept that it is partial. This I understand, but even so there is a limited willingness by Scott to address other viewpoints. And yet, that is one of the most interesting aspects of the ending of the “Old World.” It is precisely that due to Western expansion, and the often cooperative responses with which that expansion was met, that very different cultures and viewpoints were brought into regular and insistent contact. That situation created a range of intellectual, cultural, social, and political problems, not least how to reconcile the new with pre-existing beliefs and practices; this was an issue in both the West and the even more highly variant non-West. Of course, then and subsequently, there were attempts to surmount, cope with, and/or ignore the resulting disruption by propounding supposedly universal propositions, and the liberal, progressivist notions reheated by Scott can be seen in that light. So, more generally, can ideologies of optimism and global applicability, whatever their genesis.

More interest (and difficulty) resides in seeking to understand the compromises of life, the complexities of power, the multifaceted character of change, and the ambiguities of cause. In the specific case of the Atlantic, it is contrast, unsurprisingly, that is to the fore. Cuba and Virginia both had slavery, but the long-term consequences have been very different. Britain and France both became republics, but the causes, course, and consequences were scarcely similar. And so also within states. It is too easy to write of Dutch culture without contrasting Amsterdam (on which Scott, like Simon Schama before him, writes extensively) and the bulk of the United Provinces, not just poor areas like Drenthe, but many other parts of the country. Similarly, it is misleading to write of America and its Revolution without assessing adequately the many Loyalists and also the many uncommitted.

Like Scott, I studied for a while at Cambridge. I see in his work not only the influence of the Cambridge political theorists, but also of a broader tranche of scholarship there (and elsewhere), with its fascination with text, discourse, and Zeitgeist over the complexities of nuts-and-bolts history, that which happened and was reflected upon in all the confusion and variety one would expect. It is possible to criticize Scott in terms of his approach to texts, not least with reference to the failure to confront differences in republicanism, but, for me, it is the disengagement with the complexity of the non-textual that is most disturbing.

Publishers and reviewers are apt to prefer simplicity and boldness. That certainly makes for clarity. This book unfortunately has all the clarity of a New York Times account of the past. It is tendentious and deeply flawed. Much of the writing is hackneyed in its phrasing, whether “the avalanche of publications” or “As London anchored the transnational and global process which made the British imperial and eventually industrial state, so it was made by that process into the first world city.”

Also, far from presenting the conceptual originality and startling connections proclaimed by a back-cover puffer, this book possesses an element of weary predictability as you turn the pages and find the established connections of academic platitude—which can be readily reread as the established platitudes of academic connections, for the case of the latter in this book deserves anatomization. Much of this felt like going back half a century. Sometimes that is praise from me, but not in this case.

Jeremy Black has most recently published Tank Warfare (Indiana University Press) and A History of the Second World War in 100 Maps (University of Chicago Press). 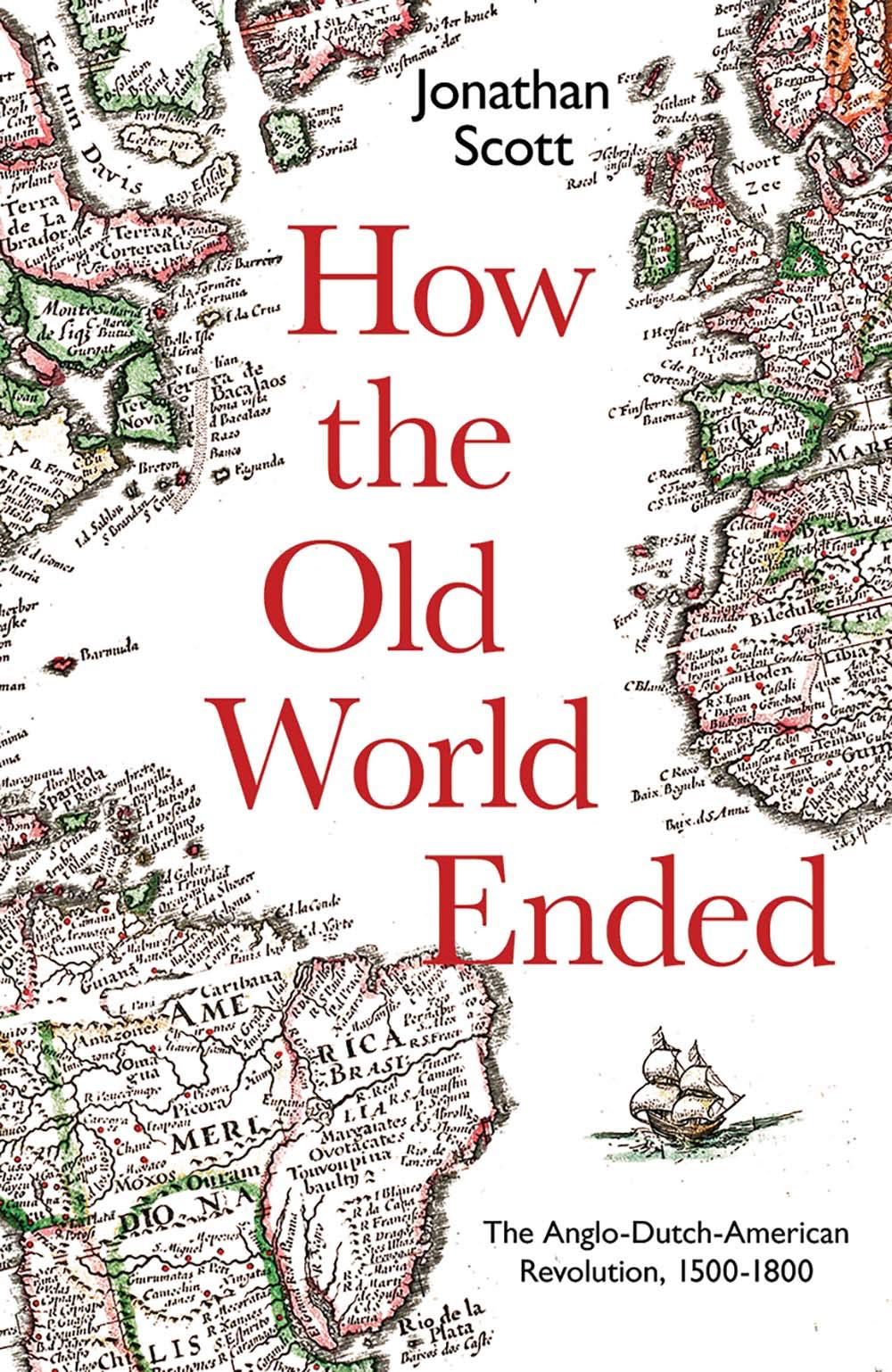 How the Old World Ended

II Plutarch & the issue of character by Roger Kimball

Same as it ever was by Jeremy Black