An artist may be the victim of his own success. He becomes known for the single iconic work rather than his body of work, a prevalent and unfortunate condition given the taste for spectacle and obviousness that dominates popular thought. I wonder if Velázquez wishes he could take back Las Meninas. But there is a categorical difference between an artist like Velázquez and an artist like Edvard Munch, at least in our contemporary culture. For we can all conjure in our minds other paintings by the Spanish master (those Spanish Habsburgs, inbred so many times over that one can see the spittle hanging about their malformed chins), but can we do the same with Munch? I doubt it. Reproduced endlessly, Munch’s Scream has ascended to the realm of kitsch. The recent then-record-breaking purchase of a version of the painting at auction by the financier Leon Black has only solidified the work’s place in our culture, likely to the detriment of Munch’s reputation as an artist.

We are fortunate that Madrid’s Thyssen-Bornemisza Museum has done its part to correct the unfortunate notion that Edvard Munch begins and ends with the iconic Scream. In an exhibition composed of eighty works, many of which were borrowed from the Munch-museet in Oslo, the idea that Munch is an artist of minimal breadth is buried, one hopes for good. “Edvard Munch. Archetypes” features an expansive collection of works, subdivided into various thematic categories that help to frame the viewer’s thinking about the artist; thinking that will inevitably lead to the conclusion that Munch is a major artist, one deserving of far more consideration than is usually given him. Eschewing a steady chronological march, the show prefers to group sets of paintings together thematically, separating the eighty works into nine categories, or archetypes: Melancholy; Death; Panic; Woman; Melodrama; Love; Nocturnes; Vitalism; Nudes. The divisions are somewhat arbitrary—nocturnal or melancholic could describe most of the works on offer here—but this does not hinder significantly the viewing experience, and with one or two exceptions the curators, Paloma Alcaró and Jon-Ove Steihaug of the Thyssen and Munch-museet respectively, seem to have discerned the underlying current in the work and made the appropriate thematic grouping. 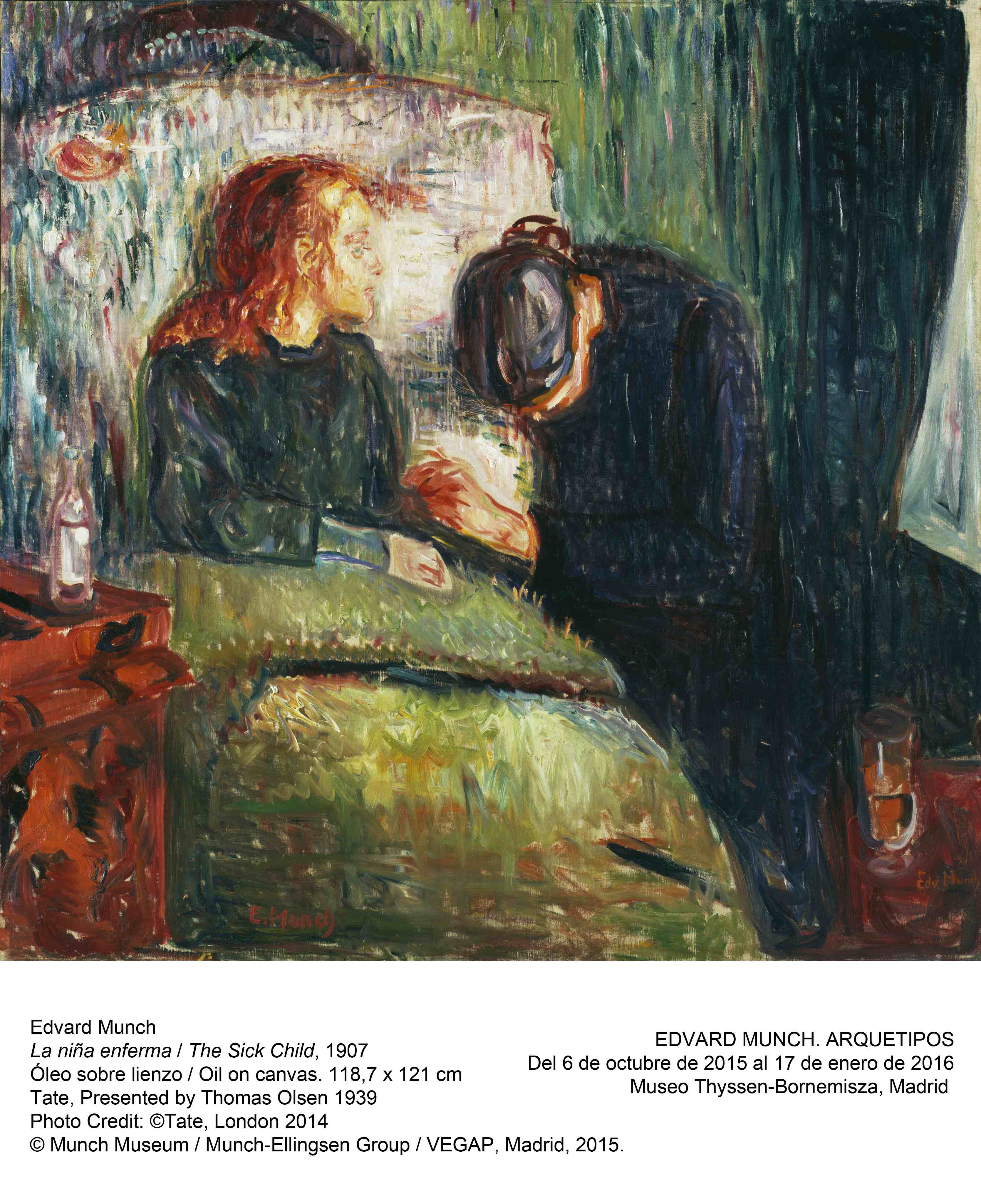 This is no small task in such an extensive exhibition: what makes the three versions of The Sick Child (1894; 1896; 1896) from the Munch-museet, the Thyssen’s own collection, and the Clark Institute in Williamstown, representative of Munch’s deathly work rather than his melancholic? Ultimately, not much. That is until one considers the other works grouped as “Melancholy” and “Death.” The works in “Melancholy” have a distinct sadness: despondency without apparent cause. The black dog hangs about them, an unseen specter and harbinger of anguish and dolor, most apparent in the eponymous Evening. Melancholy (1891) and Melancholy (1892). In both, a black-haired man sits in the foreground, a rocky shoreline spreading out behind him. Eyes downcast, he is a solitary, benighted figure, and this disconsolate sense is heightened by the sludgy black water extending from the shore. The air hangs heavy and hope seems a very far prospect indeed. There is a different spirit at work in the “Death” selections: the eternal footman, with his ghastly snicker. This is not to say that The Sick Child set is not melancholic, but in these pictures there is a known cause for despair. In the 1894 version, done in black and white drypoint, a woman grieves openly as the titular child sits on her deathbed. There is sadness here, a sadness born out of the death of Munch’s sister Johanne Sophie in 1877, but it is a Kierkegaardian sickness unto death rather than mere melancholy. We understand the source of the distress; unlike in the Melancholy pictures, we know what comes next. The two 1896 versions, done in lithographic pencil, dispense with the grieving figure to present death in its most immediate form. We see only the dying girl in profile, receding into the background, meeting her maker softly and meekly. 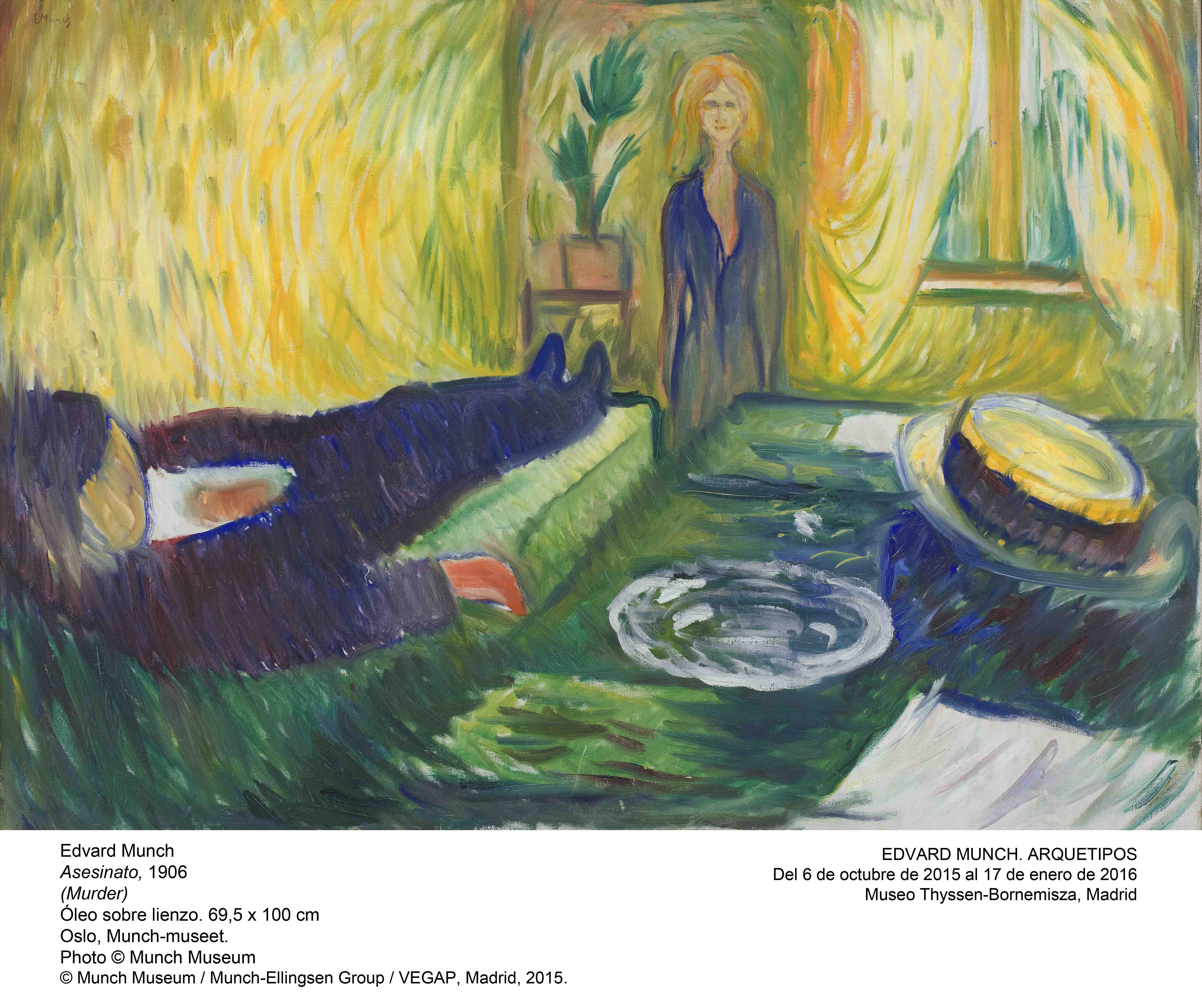 But this is familiar Munch territory, the Munch of our expectations, the representative of modern anxiety. Much of the success of this exhibition lies in exposing a Munch beyond these superficial and trite conventions. Take, for instance, what may be the most surprising work featured among the eighty pictures, a 1937 composition called Under the Chestnut Tree, painted seven years before the artist’s death and grouped under the header of “Vitalism,” which features sundry works depicting figures outdoors. In the picture, a pretty, traditional woman stands under an overhanging canopy of fecund green leaves. She is visually related to the assassin in Murder (1906), a picture grouped as “Melodrama” in one of the show’s other rooms. Whereas the murderess is gaunt and subjugated to the portrait’s background, the supine and faceless male victim occupying the painting’s foreground, the subject of Under the Chestnut Tree occupies the proscenium of the composition. The blonde of Murder wears a minatory sneer, remorselessly gazing upon her mark, whose bloodied shirt confirms the work’s title. Thirty-one years later, the perpetrator’s stylistic double has cleaned up her act. She is still fair of complexion, still rangy, but has now come to the fore. Her act is not the central action; she is. Luxuriating in a commodious, fur-collared jacket, she maintains the direct gaze of her predecessor but has softened with time. She has gained features that show her to be distinctly pretty, soigné even, worthy of the splendor of her habit. She is the picture of “Vitalism,” a category one would not normally associate with Munch. A 1926 self-portrait, also under “Vitalism,” is indicative of this, too. In this painting, Self-portrait in front of the House Wall, the artist stares brashly at the viewer, head turned and lips puckered out. He is a pugilist, provocating with a bent hand and a sour look heightened by streaks of green lining the creases of his scowling face. Framed by the eponymous wall, around which hang leaved vines, the artist serves as a direct riposte to the idea that Munch’s figures are all wind-whipped homunculi, projections of our modern fears. Here the subject is very much alive, a vivified presence standing in contradiction to the typical assessment of Munch’s work. 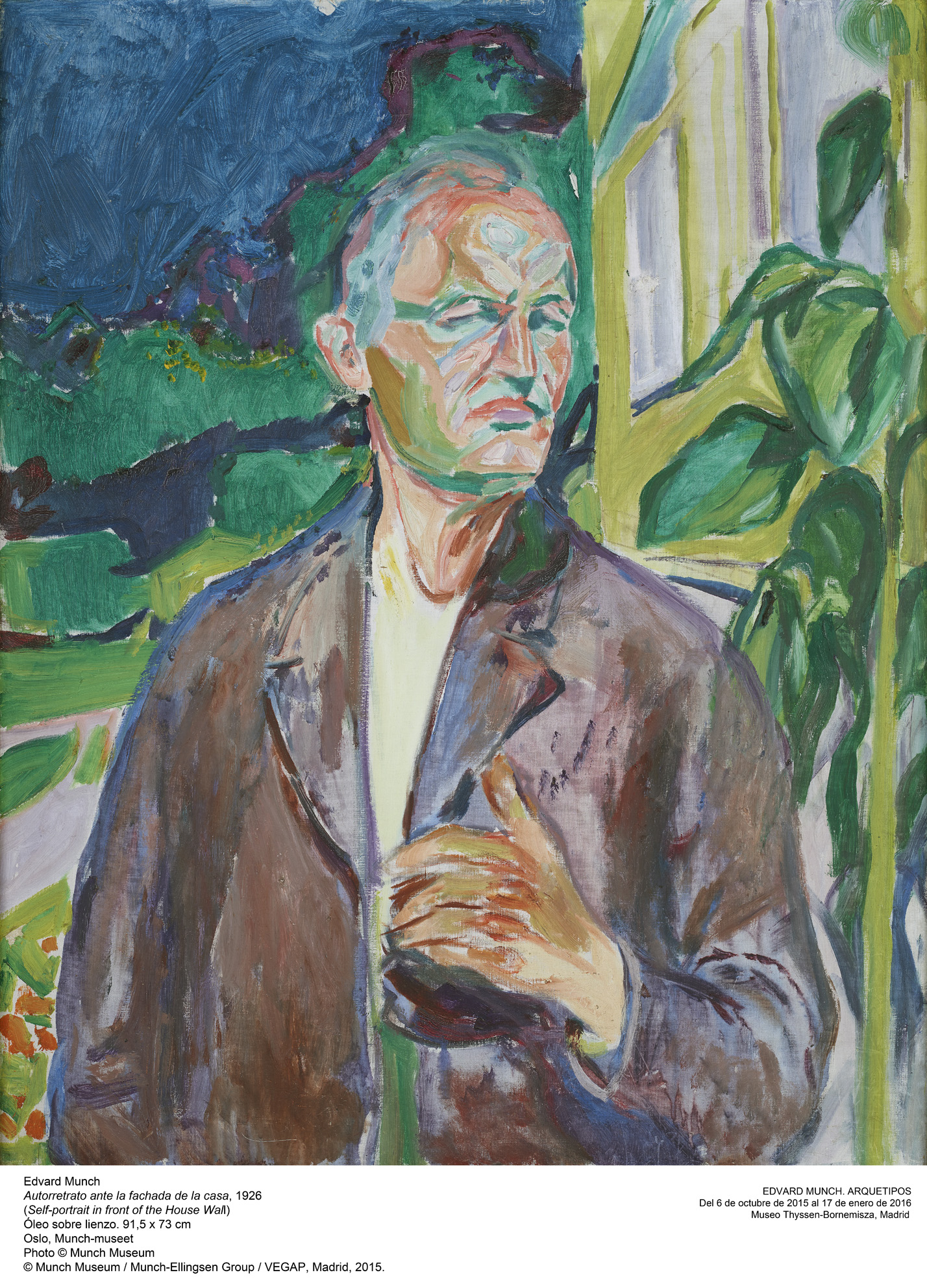 The genius of “Edvard Munch. Archetypes” is the way it exposes the common notions surrounding the artist to be utter nonsense. Munch cannot unpaint The Scream, and we, as viewers, cannot unsee it. But the exhibition proves that even the more nuanced view of the artist—that he was the great clairvoyant of modern man’s dreadful existence—is too narrow a designation for an artist of remarkable talent and breadth. Of the eighty works displayed, fewer than half fit neatly into the standard line on Munch. The rest are a remarkable assemblage, made even more remarkable by the curators’ deft classificatory touch. Our sense of the painter is heightened by our ability to understand the particular threads that unspooled within Munch’s extensive corpus. This is not to say that the traditional reading of Munch’s work is incorrect. Rather, it is incomplete.

Success may continue to victimize Munch (the orange of The Scream being so seared onto the brain of the contemporary viewer), but it should not. “Edvard Munch. Archetypes” is a welcome rejoinder to the mistaken notion that Munch is the painter of a single work; his work may be singular, but it is not exiguous.