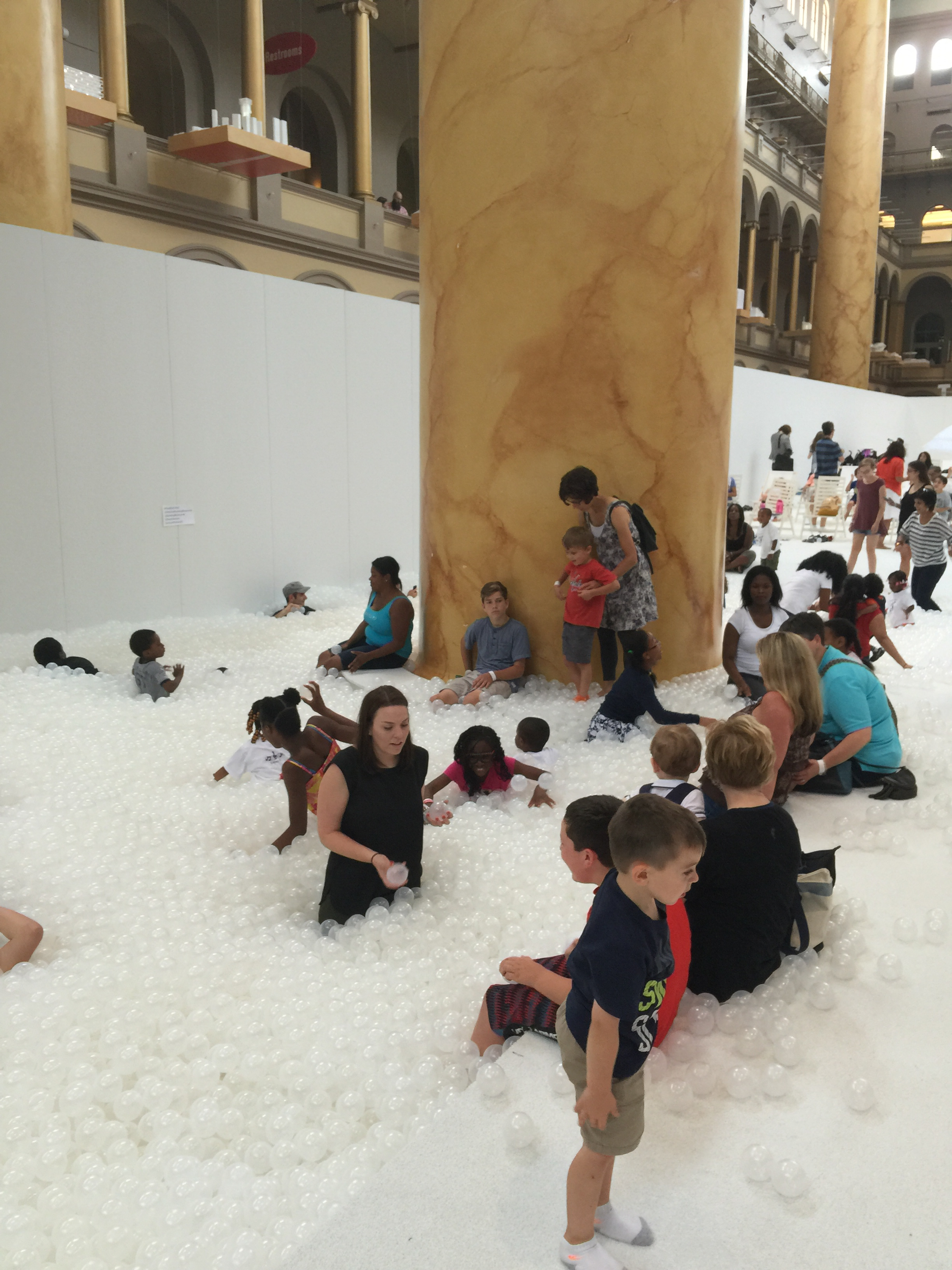 When it opened in 1887, the structure that houses the National Building Museum was the largest brick building in the world. Ringed by arcaded galleries, punctuated by seventy-five-foot-high Corinthian columns, and illuminated by tall clerestory windows, its vast Great Hall (316 by 116 feet) remains one of Washington’s wonders.

Inspired by the Palazzo Farnese in Rome, this purpose-built office building was a marvel of engineering efficiency. Designed by Montgomery Meigs, the brilliant Quartermaster General who played a key role in the Union’s victory, it was erected to house the Pension Bureau which served the tens of thousands of Civil War veterans.

The polymath Meigs (who also supervised the construction of the Capitol’s dome and designed Arlington Cemetery) was a self-taught architect of considerable skill. He planned the building with light-filled offices and a series of gradually ascending staircases to accommodate the aging soldiers seeking help with their pensions. 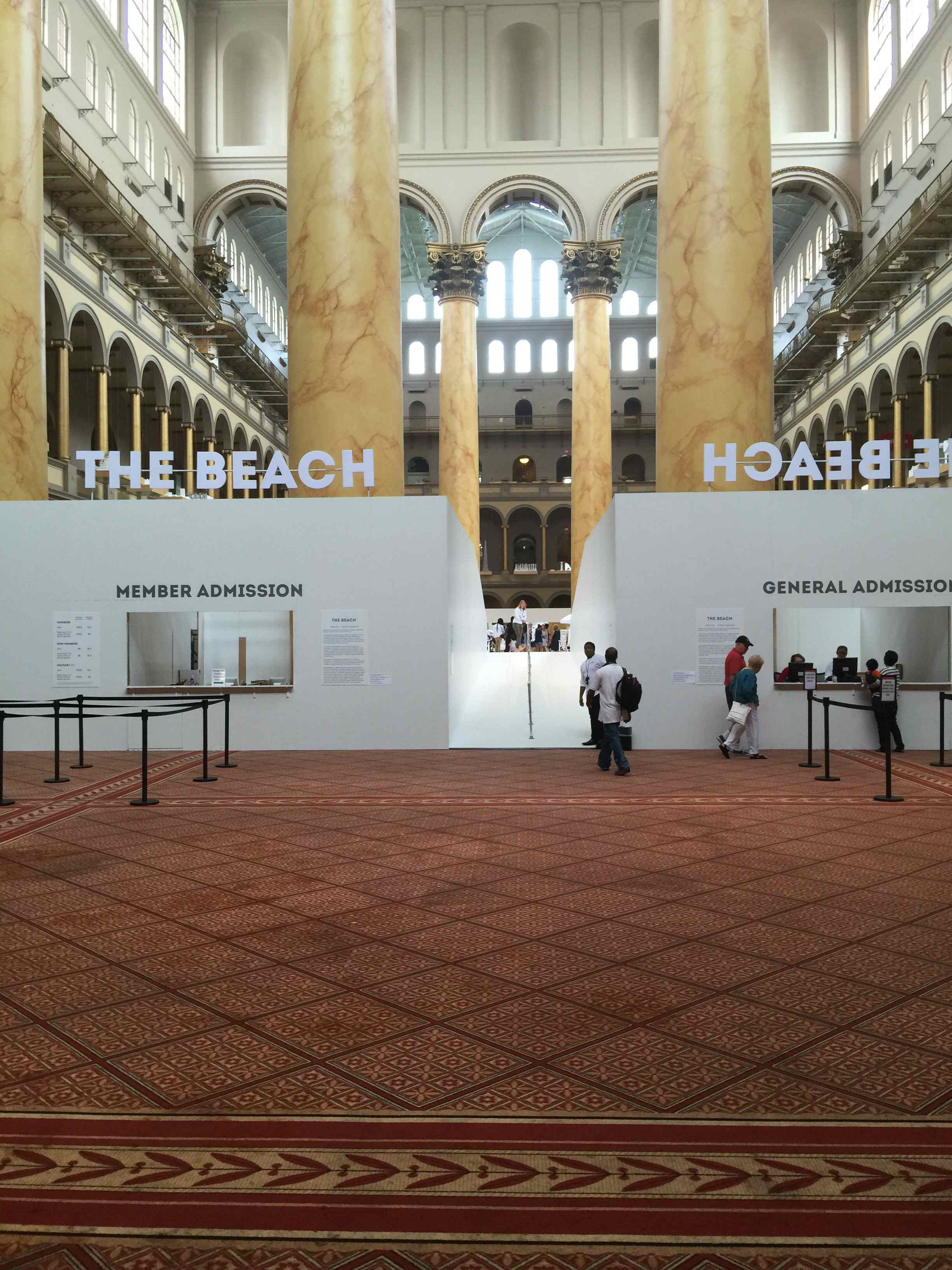 Since 1987, Meigs’s masterpiece has been occupied by the National Building Museum (NBM). The BEACH, the museum’s major 2015 summer exhibition, is plopped smack in the middle of the Great Hall.1 It is a rectangular confection of four tall, stark white walls. Disgracefully, these make it impossible for the visitor to experience the grandeur of Meigs’s space. How a museum dedicated to the understanding of buildings could permit this is hard to understand.

Inside the BEACH’s walls are an array of deck chairs, a snack bar, and the “ocean”—a sunken space holding about 750,000 transparent plastic spheres, each roughly the size of a tennis ball.

Visitors are invited to plunge in and frolic. When I saw the exhibition there were dozens of children, and a few adults, hopping about, but of course it’s impossible to swim or even get wet when you are immersed in a sea of plastic.

Now, all this might be good fun for the kiddies, but it’s devoid of even the minimum of the intellectual or educational content expected of any museum worth its salt, let alone a national one. Although, to be fair, The Washington Post called it a “perfect oh-my-god-camp-is-over-and-it’s-raining-what-are-we-going-to-do-today? destination,” adding, “After all, it’s in a museum, so it counts as culture.”

The BEACH is a product of Snarkitecture, a Brooklyn-based for-profit design outfit, which can now boast that it’s been blessed by a national museum. The exhibition’s rationale is helpfully explained by an introductory wall text that claims that the BEACH “transforms vistors’ perceptions of, and experiences within, our historic buildings.” Moreover, the Museum and Snarkitecture “invite the visitors to immerse themselves in the BEACH to see how a century-old building can still surprise us.”

If the BEACH is needed to see how the Pension Building can “surprise,” then the NBM is not doing a very good job of explaining itself. But of course all this gobbledygook masks the real purpose of this supremely silly exhibition, which is to increase the gate receipts (an adult ticket will set you back $16) and the profile of the NBM, not one of Washington’s most popular tourist attractions.

Such beside-the-point exhibitions like BEACH are not uncommon, but seldom do they so traduce the fabric of the museums that so eagerly host them. 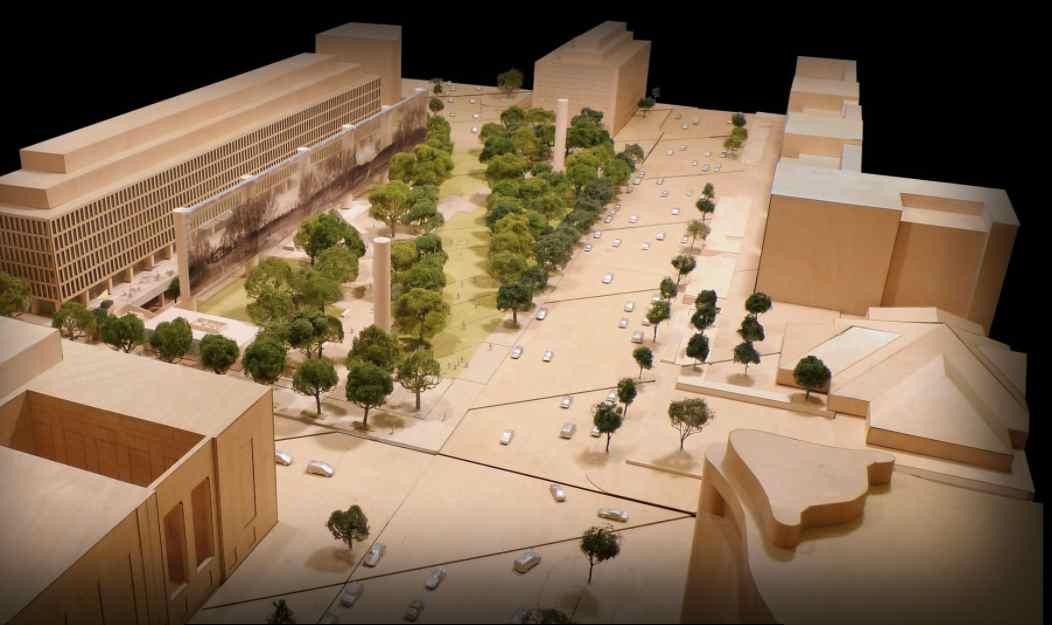 A plan for the Eisenhower Memorial, via

Last month saw a number of important developments in the ongoing saga of the Eisenhower Memorial (EM) planned for Washington’s National Mall. Sixteen years in the making, the project, featuring a controversial design by the starchitect Frank Gehry, is mired in controversy.

President Obama’s 2016 budget includes $68 million to fund the memorial’s construction. The EM Commission (full disclosure: I am the sole member of the Commission who opposes the Gehry design) has received no construction money for the last two years. Obama’s budget also requests an additional $2 million for operating money: the Commission employs nine full-time staffers in a K Street office suite.

In June, both the House and Senate passed appropriation bills for 2016. They were not good news for the few fans of the memorial.

The House appropriators zeroed the EM out: not a cent for construction or operations. The Senate authorized just $1 million to keep the lights on. So, in total, the EM got just 1.4% of the $70 million ask. If funding proceeds at this pace, it’s estimated that Ike’s memorial will be completed around 2184!

But it doesn’t stop there. The House bill says that a “reset” is necessary “in order for the project to continue.” It calls for a new architectural competition and the appointment of a new Commission staff. It also notes that $7 million has already been paid to contractors and consultants: Gehry’s firm raked in about a third of this.

The bill also documents a feeble fundraising campaign: by the time of the budget bills, $1.4 million had been paid to a development firm, but only $450,000 had been raised over the last four years, $300,000 of it from a single donor. In July, Taiwan pledged $1 million dollars, boosting private donations to $1,450,000.

In a surprise move, the bill from the Senate contains, for the first time, language critical of the EM. The Senate appropriators caution that “significant unresolved issues remain among the many stakeholders involved with the Eisenhower Memorial.” Furthermore, they warn that no construction should take place “until there is broad support among the public, the Eisenhower family, and Congress concerning the design and construction.”

A final budget still has to work its way through Congress, and there could be surprises, but the end of the Gehry design seems in sight, even though the National Capital Planning Commission and the Commission of Fine Arts (CFA) gave final approval in July. This completes the EM’s consent process, but the consent of the two commissions is in no way tied to Congressional funding.

The sculptures okayed by the CFA (chaired by Earl Powell III, the director of the National Gallery, who, sadly, has been a long-time cheerleader for the EM) are appalling. One group depicts Eisenhower addressing the troops before the D-Day landings. The EM Commission describes the other as “abstract figures representative of civilian power and military power with Eisenhower symbolizing the delicate balance between them.” Of course.

Their sculptor is the Russian-born Sergey Eylanbekov, a graduate of Moscow’s Surikov Academy of Fine Arts, a Stalin-era establishment. His website boasts that some of his sculptures have been bought by the Russian Ministry of Culture.

Probably not much more needs to be said about Eylanbekov, other than that his art belongs somewhere between the styles of Soviet Socialist Realism and Arno Breker, but with even more mawkishness and less technical skill. It will be interesting to see how those who defend Gehry’s design because of its modernity can endorse such a throwback sculptor. Wouldn’t Jeff Koons have been a better choice? 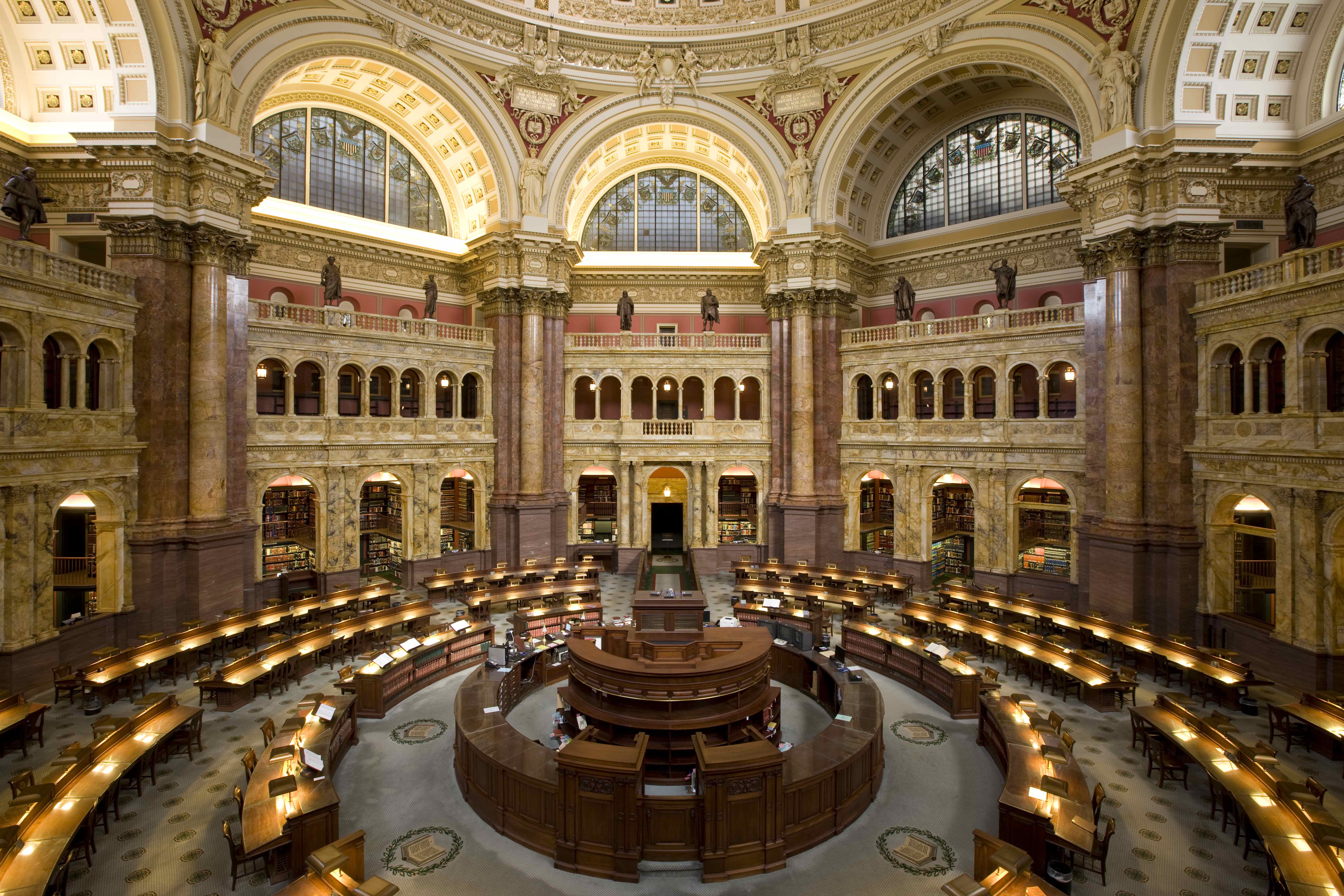 Main reading room at the Library of Congress.

Appointed by President Reagan in 1987, Dr. James Billington, eighty-six, is the current Librarian of Congress; amazingly, he is only the thirteenth since the LOC’s founding in 1802. He has served five presidents over the last twenty-eight years, making his the fourth longest tenure of any Librarian. Unlike most other presidential appointments, the Librarian has no term limit.

An Army veteran, Billington taught at both Harvard and Princeton and later became the successful director of the Woodrow Wilson International Center for Scholars, a Washington policy think tank, before moving to the LOC.

An impressive mixture of serious scholar (he’s the author of important books on Russian history) and administrator, Billington was the perfect match for the LOC. He also turned out to be a remarkable cultural diplomat, an adroit politician, and a formidable fundraiser.

Over the decades of his tenure, he brought a sense of rigor and quality to the LOC when so much of the academic world, especially the humanities, descended into irrelevancy. He had little use for political correctness and academic faddishness.

Billington was an early adoptor of digital technology to acquire and disseminate knowledge. One initiative, among many, was American Memory, a pre-internet plan to digitize the LOC’s holdings on CD-ROM. In 1995, the LOC and Congress established THOMAS.gov, a site that provides internet access to federal legislative information. Billington was also a founder of the ambitious World Digital Library (starting in 2009), an international partnership to digitize “significant primary materials from all countries and cultures.”

While I was chairman of the National Endowment for the Humanities, I had the pleasure of working with him to launch a joint NEH/LOC effort, Chronicling America, an ambitious and massive project to digitize full-page views of every American newspaper from 1836–1922.

Despite his early enthusiasm for digitizing and its vast research potentials, Billington was rightly cautious about embracing fully the brave new ecosphere of digital information technology in lieu of the time-proven world of print and paper. This has led to trouble.

In March of this year, the General Accounting Office issued a scathing 133-page report listing thirty-one recommendations for improvements at the LOC. (There’s been speculation that the release of the report was timed to move Billington out to make way for an Obama appointee.)

One of the report’s principle findings was that, under Billington’s tenure, the LOC has not kept pace with crucial digital technology, today something of paramount importance for any library.

The report also faulted him for not having a strategic IT plan, for not appointing an effective chief information officer, for general mismanagement, and for not being able to track spending.

Shortly after the report was released, The Washington Post published its details in a damaging article that cited negative comments from the LOC’s current and former staff, some suggesting that Billington had stayed on too long.

The New York Times piled on with an even more negative piece, quoting Robert Darnton, the director of the University Library at Harvard, who called for the Librarian’s resignation. Now that he was on the ropes, Billington’s staff twisted the knife by telling the Times that he “does not use email and that they often communicate with him though a fax machine at his house.”

Billington told the Post he would not step down. Members of Congress defended him, and David McCullough said he was “a man of infinite interests and extraordinary ideas,” but the writing was on the wall.

In June, Billington announced he would retire by the end of this year. Nancy Pelosi and Mitch McConnell praised him while, according to the Post, “The reaction inside the library was almost gleeful.”

There is little doubt that the LOC is no longer a leader in digital access to its collections, as anyone who visits its website will see. Perhaps Billington did stay on too long, and it’s unfortunate that he has to leave the LOC under such strained circumstances. But it’s important to look beyond the sad events of the last few months to remember his accomplishments over a long and distinguished tenure. It’s going to be hard to find someone to fill his very big shoes.

1 The BEACH opened at the National Building Museum, Washington, D.C., on July 4 and remains on view through September 7, 2015.

II Plutarch & the issue of character by Roger Kimball