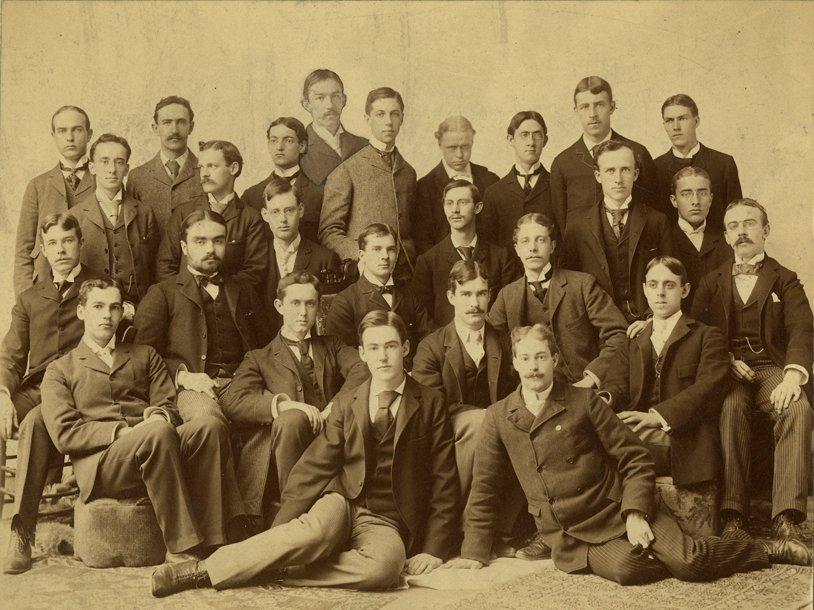 It has been a rough few years for fraternities. In March of 2012, Rolling Stone published a much-discussed account of the supposed hazing and binge-drinking rituals of a fraternity at Dartmouth College. Two years later, Caitlin Flanagan wrote a feature article in The Atlantic, “The Dark Power of Fraternities,” cataloguing their various depravities and concluding that they are a “grossly outdated” institution. In the summer of that same year, Andrew Lohse, the Dartmouth student featured in the Rolling Stone article, released a memoir, Confessions of an Ivy League Frat Boy, which Publishers Weekly said shed light on the “tribal stupidity of young men.” Then the University of Virginia fraternity Phi Kappa Psi was thrown into the national spotlight, again by Rolling Stone, when its members allegedly gang-raped a woman named “Jackie”—an infamous work of fabrication that has now been thoroughly discredited, but not before further damaging the reputation of frat boys everywhere. To a large extent, the media has been successful in establishing a negative image of fraternities, one that often depicts fraternities and sexual assault as two sides of the same coin.

There are indeed examples of unacceptable behavior by fraternity members. Early in March, a video surfaced of members of the fraternity Sigma Alpha Epsilon at Oklahoma University singing a horrific racist chant that claimed black students would never be allowed to join their fraternity, and also referred to lynching black students.

Some schools have responded to these kinds of behaviors by banning fraternities outright. Others are attempting to reform—some would say “emasculate”—them by utterly changing their character. Greek life leaders at the University of Virginia are clamping down on raucous behavior by regulating how alcohol is served at the fraternities. Wesleyan University has mandated that fraternities become co-ed or lose official recognition from the college. Dartmouth College, my own alma mater, and where I was a member of a sorority, has passed an initiative called “Moving Dartmouth Forward” that aims to reduce binge drinking, hazing, and sexual assault by banning hard alcohol on campus and starting a residential college system to rival the fraternities.

Though writers like Flanagan and Lohse, as well as faculty members—who have historically stood against fraternities and still do—are quick to blame fraternities for many of the problems of campus social life, the issues we see on today’s college campuses are not the fault of the fraternity system, which has produced many great leaders in business, politics, and beyond, and which continues to contribute to college communities in positive ways. The problems on campus arise, rather, from a warped ideal of manliness to which fraternity brothers today aspire, an ideal radically different from the one that inspired the original founders of Greek organizations and that guided fraternity behavior until recent years.

The fraternity system is as old as America. The first fraternity, Phi Beta Kappa, was founded in 1776 at William and Mary. That society, which still awards membership based on academic performance, strove to promote fellowship, intellect, and moral conduct. By the 1820s, Phi Beta Kappa had transformed into a purely academic society as fraternities started to spread across American colleges. These organizations, which were literary and social societies, were founded very much in the same spirit as Phi Beta Kappa. They fashioned themselves with the model of ancient Greece in mind. They were named after Greek letters during a period in American history when “Greece eclipsed Rome as the model for virtuous citizenship in the American imagination and at colleges particularly,” as the historian Nicholas L. Syrett writes in The Company He Keeps: A History of White College Fraternities. “To be Greek,” he goes on, “was to hearken back to the ancients, to the ideals of the founding of Western civilization; it was also to subscribe to notions of self-improvement through literature and oratory.”

Like the band of friends in Plato’s Symposium, fraternity members came together around two common interests: fellowship and intellectual cultivation. To discipline one’s mind, as Syrett notes, was part of living a virtuous life, which is what the fraternity brothers aspired to do. Meeting minutes from the mid-1800s show brothers at schools like Amherst, Yale, and the University of Michigan gathering to discuss Shakespeare, the benefits and drawbacks of the United States admitting New Mexico into the Union, and “the character of William Pitt, Earl of Chatham.” Manliness was defined in terms of being intelligent, socially graceful, handsome, and morally upright—that is, being a gentleman. In 1836, a fraternity at Williams College determined whether to admit men into their brotherhood by asking: “Would you want your sister to marry him?”

By the 1920s, the ideal of masculinity changed from the more genteel manliness of the antebellum period to one grounded in physical prowess, athleticism, sexual virility, and aggression. Drinking had occurred previously in fraternities, but the fraternity brothers tried to drink “gentlemanly” quantities—that is, in moderation. But by the post-World War I period, excessive drinking—not self-control—became a mark of masculinity. The more manliness and drinking became intertwined, the more college men drank themselves to the point of oblivion.

Part of the reason ideals of manliness changed, Syrett points out, is women. As women started attending colleges that were traditionally all-male, men not only responded with hostility, but they felt compelled to assert their manliness in new ways. Women, after all, were now equal to men in the eyes of the college. They could engage in the same intellectual exercises as the fraternity men of the antebellum period. But what women could not do was rival men in their physicality, which included their drinking prowess. Another dividing line between men and women was the act of sex itself. For men, sexual prowess became a signature of manhood. “It was in the twenties,” writes Syrett, “that it became popular—indeed, commonplace—for young, middle-class men, fraternity brothers among them, to discuss their sexual exploits with each other.”

Even as the cultural tide continued to turn against the traditional ideals of manliness in the middle of twentieth century, there were still glimmers of gentility in fraternity life. The former presidential speech writer Jeffrey Hart, a mentor to many at Dartmouth, often spoke about how his fraternity at Columbia, where he was a student in the early Fifties, taught him how to be a gentleman by holding him to a high standard of behavior. His fraternity invited professors over for cocktails at the fraternity house, he said, and the brothers aspired to be like the professors they met: intellectual, charming, and well-mannered. Cal Mackenzie, a Bowdoin alumnus and Colby professor reminisced along similar lines to Newsweek magazine recently: “When I was a fraternity member in the ’60s, we wore coats and ties to dinner every night. There were interfraternity debates.” He went on to say: “But it was a much more civilized lifestyle in the ’60s. That changed for a lot of reasons.”

One reason, Mackenzie told Newsweek, was the “Animal House” ideal that emerged in the 1980s and washed away, in the words of the Newsweek journalist, “the romantic fraternity culture of the 1950s and ’60s.” Animal House, which is based on fraternity life at Dartmouth College in the 1960s, came out in 1978. The hero of the film is an intellectually apathetic character named Bluto who is impervious to pain and can chug a fifth of whiskey in less than one minute. He, in other words, represents the new ideal of manliness, which many students today admire. All across the country, college freshman have posters on their dorm room walls of the iconic image from the movie of Bluto wearing a sweatshirt with the word “COLLEGE” emblazoned across it. This is a very different picture of manliness from that celebrated in the antebellum period, hints of which were still present in college fraternities in the 1950s and 1960s.

Hazing, one of the most criticized aspects of fraternities, was present on college campuses long before there were fraternities—usually with sophomores hazing freshman—but it was only after the Civil War that it became a regular part of fraternity life. One potential explanation for this, Syrett posits, is that Civil War veterans, upon returning to college from war, may have brought the hazing practices of their battalion back with them and institutionalized those practices in their fraternities. The purpose of hazing—by sophomores, by Civil War soldiers, or by fraternity brothers—was always the same: it provided an opportunity for young men to prove their manliness by undergoing various trials and tribulations. As Joseph Campbell would remind us, hazing, in one form or another, is an ancient rite of passage that, for the male sex, has always symbolized a graduation from the world of boys into the world of men.

“The average freshman,” a proponent of hazing in the early years of the twentieth century, “ . . . is distinctly not a man, and the fraternity must take up the task of character shaping where the parents left off or never began. His exaggeration of his own omnipotence must be dissipated, and as one of our freshman puts it, he usually cannot reason it out, so other methods must be used.” Some of the more servile hazing rituals were created to diminish the new members’ sense of their “own omnipotence”—to teach them their place. Though there are many problems with hazing, there is something noble about its traditional purpose, which can be seen in religious discipleship as well: the individual must subsume his individuality into something larger and better than himself. To this day, that logic guides soldiers in the U.S. military. During boot camp, they perform feats of strength and willpower that are designed to transform them into more positive versions of themselves.

From the beginning, though, some of these hazing rituals were dangerous. As early as the 1870s, a Cornell student died during his fraternity’s initiation ceremony. He was wearing a blindfold near a gorge and fell into it. Other hazing rituals at the turn of the century included being tortured with “electrical horrors” and, at Stanford, being “tubbed,” which meant being “fully submerged in a tub of cold water until they ‘strangled,’ ” as Syrett writes.

Today, it would be hard to claim that such hazing activities do not cross an ethical line. But learning where exactly that line stands and taking precautions not to cross it are further lessons in maturity. Students today do not need more rules about when and how to drink alcohol. Nor do they need new rules or codes of conduct to encourage students to behave virtuously. What they need is a higher and better standard to strive for—an ideal worthy of them. In the antebellum period, that ideal came from ancient Greece and was firmly grounded in virtue. Hazing and drinking, when they did occur, were opportunities for self-betterment: to diminish one’s ego and to drink in moderation like a gentleman. Today, the ideal that students strive for is grounded in a version of masculinity that is destructive, aggressive, and alienated from virtue.

Rather than giving fraternities new rules that they will surely break, college administrators and faculty members might encourage them to rethink their values and ideals. The problem with Greek life today is not Greek life itself; it is that the masculine ideal the fraternities currently celebrate is depraved. If that ideal changes, perhaps the culture of the fraternities would change too.

Emily Esfahani Smith, an editor at Stanford’s Hoover Institution, is the author of The Power of Meaning: Crafting a Life that Matters, forthcoming from Crown in January 2017.

The catastrophe of suicide

“A light at the heart of the world”