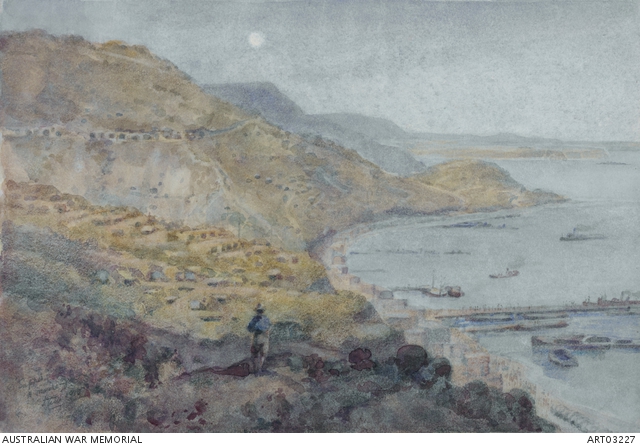 “A Centenary of Australian War Art” is a decidedly unfashionable exhibition.

Figurative illustrations of war are now sneered at by the peace-at-all-cost crowd and ignored by art historians, unless they show war as meaningless sacrifice. Yet war art has been a staple of Western culture from antiquity to the early twentieth century: The Alexander Mosaic, the Bayeux Tapestry, Paolo Uccello’s The Battle of San Romano, and J. M. W. Turner’s Battle of Trafalgar,21 October 1805 are famous examples of the type. War also inspired masterpieces of horror: think, for example, of Callot’s Miseries and Misfortunes of War or Goya’s Disasters of War, images of civilian slaughter as savage as those of isis.

Shortly after Goya’s death in 1828, photographers began to document war, first in the Crimea and then during the American Civil War. Their cameras’ slow exposure times prevented them from chronicling actual battle, but their photographs gave the public an unflinching look at the carnage of war, with its bloated dead and blasted landscapes.

It is commonly assumed that photography and film killed war art. This is untrue. Certainly from the twentieth century on, most people saw war through the photographer’s lens, but the tradition of war art continued unabated. It was believed, rightly I think, that art could convey and distill the blood, sweat, and tears of war better than the instantaneous snap of a camera.

Starting with World War I, the British government commissioned artists to record war on the home front and in the front lines. John Singer Sargent (who was surprised that the troops fought on Sunday), John Nash, and William Orpen signed up as “Official War Artists,” and each created important works of artistic and psychological complexity. During World War II, the scheme continued under the direction of Sir Kenneth Clark, who commissioned works by Henry Moore, Graham Sutherland, and John Nash. Other combatants, including the United States, organized their own art programs.

Australia’s Official War Art Scheme was founded during World War I and over seventy of its artists have recorded conflicts from Gallipoli to Afghanistan. “A Centenary of Australian War Art,” which will travel to the National World War I Museum in Kansas City on July 16 and stay on view until December 6, 2015, displays forty-one of their works, all from the collection of the Australian War Memorial in Canberra.

Most, if not all, of the paintings will be new to an American audience. For that reason alone the exhibition is worth a look. Visitors will also learn something about the lively story of twentieth-century art in Australia and about the history of the country itself. A major event in that history, and in the formation of the Aussie identity, was the ill-fated Gallipoli campaign (which cost Winston Churchill his post as a First Lord of the Admiralty). The heroism and tragedy of the event is still commemorated in Australia by anzac Day, a national ceremony celebrated on April 25, the day in 1915 when the Australians and New Zealanders stormed the Ottoman shore.

Horace Moore-Jones was one of those soldiers. Trained in New Zealand, Australia, and England, he enlisted in 1914 when he was forty-six (he lied about his age). Technically not an official war artist—he joined up before the program started—he executed over eighty watercolors (four are in the exhibition) portraying the campaign’s topography, including the landing beaches, with a delicate, haunting beauty that belies the bloody slaughter they witnessed.

While Moore-Jones covered the war in Turkey, Sir Arthur Streeton, one of Australia’s most famous artists (he’s been called “a national institution”), was on the Western Front. An early Australian impressionist, he (also over age) joined the Royal Medical Corps in London. He was then sent as a war artist to France where he observed, as did Sargent, that it was almost impossible to paint battlefield action because soldiers and equipment were so carefully camouflaged. Instead, he portrayed gun emplacements, airplanes, dressing stations, headquarters, and wrecked buildings. His Cathedral Interior of 1918 depicts a blasted French church with a gaping shell hole in its roof and damaged interior. It was probably painted after the armistice because Streeton placed a white dove (a symbol of peace) flying above its altar. A remarkable painting filled with fluidly brushed forms in light and shadow, it owes much to Sargent.

The World War I artists are the high point of the exhibition, but there are some very good pictures from later wars. One of the best is by Alan Moore, an official war artist who served in the Pacific, Middle East, and Italy before arriving in Germany to document prisoner-of-war camps. In 1945, he asked to be sent to Bergen-Belsen. Stunned by the thousands of bodies and the withered survivors, he made sketches and watercolors recording what he saw. Interestingly, he also took a series of photographs because he was worried that no one would believe his art. Moore’s SSTroops Unloading the DeathWagon, a watercolor with pen and black ink, shows SS guards being forced to bury their victims. Here they unload a truckload of women and children, carrying the emaciated bodies on their backs toward the burial pits, as ghost-like survivors look on from behind a wire fence. The diagonal placement and the dark sprawling shapes create a ghastly, unforgettable sight.

The exhibition concludes with a group of paintings by official war artists who documented Australia’s far-flung conflicts and peacekeeping missions after World War II. Based on digital photographs taken through twenty-first century night vision goggles, three oil paintings (2009) by Jon Cattapan of night patrols in East Timor depart decidedly from the time-honored figurative tradition of official Australian war art. Although pleasing as form, color, and shape, they demonstrate the difficulty of credible narration without clearly defined subjects, a problem that has faced, and fazed, artists since the advent of abstract art.

Although modest in size, “A Centenary of Australian War Art” is aesthetically attractive and informative. It’s also a fitting tribute to the military deeds of one of our staunchest allies. Let’s hope that when the United States marks its own centenary of World War I in 2017, there will be exhibitions of equal value.