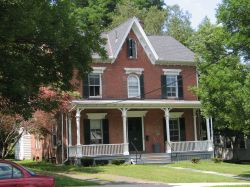 One of the great curiosities of contemporary academic life is the way intolerance for diversity of thought and expression goes hand in hand with a terrified embrace of the most exotic forms of sexual exhibitionism. It’s as if academic administrators had seized simultaneously on George Orwell’s Nineteen Eighty-Four and Richard von Krafft-Ebing’s Psychopathia Sexualis as how-to manuals for creating the university of their dreams. Someday, the glorious future might come when every student and every teacher believes and says exactly the same, approved things, and yet entertains each other with the sort of polymorphous perversity and “primary narcissism” that the Marxist Freudian Herbert Marcuse extolled in his counter-cultural bible Eros and Civilization. Places like Marquette have made a good start on the former: today they are purging John McAdams, tomorrow, Gaia willing, they will have a university that is utterly free of “offending” opinions or robust criticism. As for the latter, it would be hard to beat the academic cesspool that is Wesleyan University. Some years ago, we had occasion in this space to comment on Wesleyan’s “interdisciplinary” class on pornography, which lovingly attended to the “so-called [“so-called”?] perverse practices such as voyeurism, bestiality, sadism, and masochism, and considers the inflections of the dominant white-heterosexual tradition,” etc., etc. This expensive alternative to higher education has been making great strides to battle the “dominant white-heterosexual tradition.” Their latest initiative? A “safe space” (i.e., a dormitory) for students of the LGBTTQQFAGPBDSM “community”: that is, students who identify themselves as “Lesbian, Gay, Bisexual, Transgender, Transsexual, Queer, Questioning, Flexual, Asexual, Genderfuck, Polyamourous, Bondage/Disciple, Dominance/Submission, Sadism/Masochism and”—just for completeness—“people of sexually or gender dissident communities.” It’s beyond parody, of course, but not beyond a tuition, room, and board bill of $62,736 per annum.

V The road to Waterloo by Jeremy Black