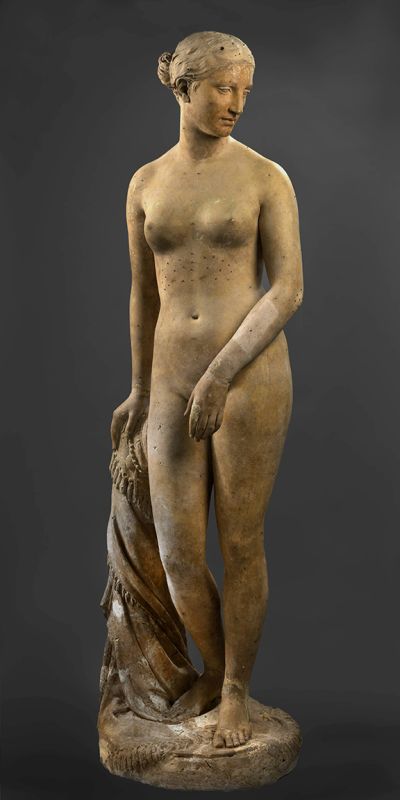 Today the work of Hiram Powers (1805â€“1873) is largely forgotten, but, in the second half of the nineteenth century, his Greek Slave was one of the worldâ€™s most celebrated, and controversial, sculptures.

The son of a Vermont farmer, Powers made his mark in Cincinnati crafting wax figures for a tableau of Danteâ€™s Inferno. These, and other more conventional sculptures by the talented and affable young man, attracted a wealthy patron who urged him to travel to Washington, D.C., in search of lucrative federal commissions.

While moderately successful in the Capital, Powers realized that he had to move to Italy to acquire training in the grand European tradition so prized by Washington patrons, especially federal ones. In Florence, he found skilled assistants, spotless white marble from the Tuscan quarries at Seravezza (Michelangelo used the same stone), and American and British tourists eager to buy his realistic portrait busts.

But in 1845, he hit the jackpot with the Greek Slave, a life-sized marble of a Greek woman captured by the Turks during the Greek Revolution (1821â€“1832), Greeceâ€™s war to free itself from Ottoman domination.

Based on the Hellenistic Medici Venus in the Uffizi, the statue depicts a beautiful young woman whose hands are bound by chains. Her robe, seemingly just removed, is seen at her right side.

The Greek Slave catapulted Powers to instant stardom after 100,000 visitors flocked to see it in London and the United States. In both countries it garnered much critical acclaim for its beauty and sensuousness, markedly different from the prevailing icy neoclassical style of Canova or Thorvaldsen.

In the mid-nineteenth century, nudes of classical gods and goddesses were barely acceptable to American audiences, so the statue of an undressed, and very voluptuous, modern-day woman (the Greek revolution had ended just over a decade before) for sale in a Levantine slave market caused a sensation.

Anticipating criticism of the statueâ€™s nudity, Powers claimed that its real subject was the womanâ€™s ardent Christian faith that allowed her to triumph over her captivity and humiliation.

Nonetheless, because of the controversial nature of the statueâ€™s nudity, some American venues had special hours for both sexes, while other times were reserved for men only. The propriety of the statue was widely disputed in both press and pulpit.

And, on the eve of the Civil War, the Greek Slave touched the nerves of a country already embroiled in debates over slavery and its abolition.

The statue is now the subject of â€œMeasured Perfection: Hiram Powersâ€™ Greek Slave,â€ a small but excellent exhibition at the Smithsonian American Art Museum.1 This is a fitting venue for the exhibition because the contents of Powersâ€™s studio, amazingly enough, remained intact in his Florentine villa until the late 1960s, when they were purchased by the museum. The SAAM now holds the greatest repository of his marbles, plaster models, tools, and a vast archive of his papers, a treasure trove for the study of nineteenth-century art.

The exhibitionâ€™s curator, Karen Lemmey, has skillfully mined this material to demonstrate how the Greek Slave evolved from plaster model to polished marble statue. Tightly focused exhibitions like this one on process are unfortunately rare. In its decline, the study of art history is now about everything but an understanding of the material and stylistic nature of works of art. This is a pity because such knowledge is essential for anyone who seeks to comprehend fully the intention of any artist.

A life-sized plaster model of the Greek Slave is the exhibitionâ€™s centerpiece. This is an important object because after its initial success in London, Powers received commissions for five other Greek Slaves. (Fearing knockoffs, he sought to patent it in 1849; the application in the exhibition is on loan from the Patent Office, which was originally housed in the museum.)

During World War II, the fourth Greek Slave (out of the six made) was demolished in a German bombing raid on England. There are no known photographs of the statue before its destruction, but a daguerreotype in the exhibition, once owned by Powersâ€™s U.S. impresario, Miner Kilbourne Kellogg, is, Lemmey suggests, likely the only record of this now lost work. 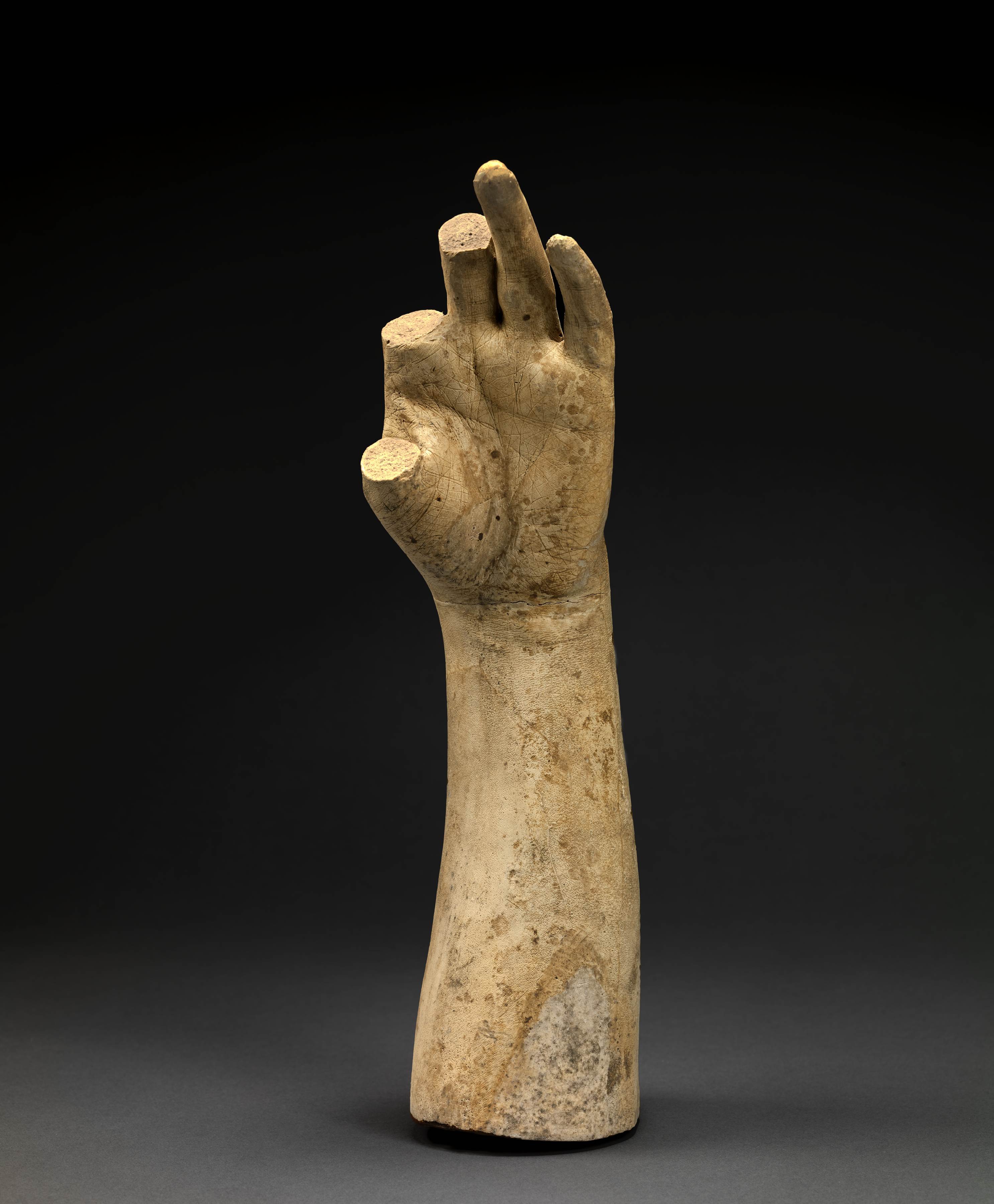 A shrewd businessman and investor who left his family a small fortune, Powers was one of the first artists to publicize his work through the new photographic technique. His son Longworth, named after his Cincinnati patron Nicholas Longworth (whose son of the same name became a famous Speaker of the House of Representatives), was a professional photographer who made numerous daguerreotypes of his fatherâ€™s work. Although Longworth was too young to have taken the daguerreotype of the Greek Slave in the exhibition, it probably was made for Powers as a sales pitch for potential patrons.

The Greek Slave casts were carved using a pointing machine, a mechanical device of rods and clamps invented in the eighteenth century. Using this machine, sculptors could accurately transfer, and then reproduce in stone, the dimensions of a full-sized plaster model like the one Powers crafted for the Greek Slave.

For the exhibition, Lemmey had a sculptor use a modern pointing machine to duplicate in marble a plaster model of the Greek Slave from the museumâ€™s Powers archive. The plaster head, the new marble reproduction, and the pointing machine are all presented side by side to help the viewer understand this unfamiliar and complicated process.

The clients who ordered the Greek Slave casts had no qualms about buying a statue identical to those owned by Powersâ€™s other patrons. One purchaser requested minor changes so his statue would not be exactly like the other replicas, but this is a very small detail.

There is, in fact, no original Greek Slave, not even the first one made in Powersâ€™s workshop, because all, including that one, are reproduced, via a pointing machine, from the same matrix, the plaster model on display in this exhibition. One can think of the model as a sort of die from which all the replicas were made; the last one was completed (without a commission) a full twenty-two years after the first was exhibited in London.

Powersâ€™s own contribution to the making of the Greek Slave was the plaster model. Usually such models were first sculpted in clay. Then the clay model was used to make a plaster model, which would be the source for replication.

In Powersâ€™s day, the clay models were expected to be based on men and women who sat for the sculptor, and not on the much easier to make life casts taken from their bodies. This was a practice frowned upon because it needed much less artistic skill, a sort of shortcut. But a plaster cast of just the Greek Slaveâ€™s left arm and hand from the Powers archive bears the unmistakable imprints of human skin, indicating that he may have used life casts for at least part of thestatue. 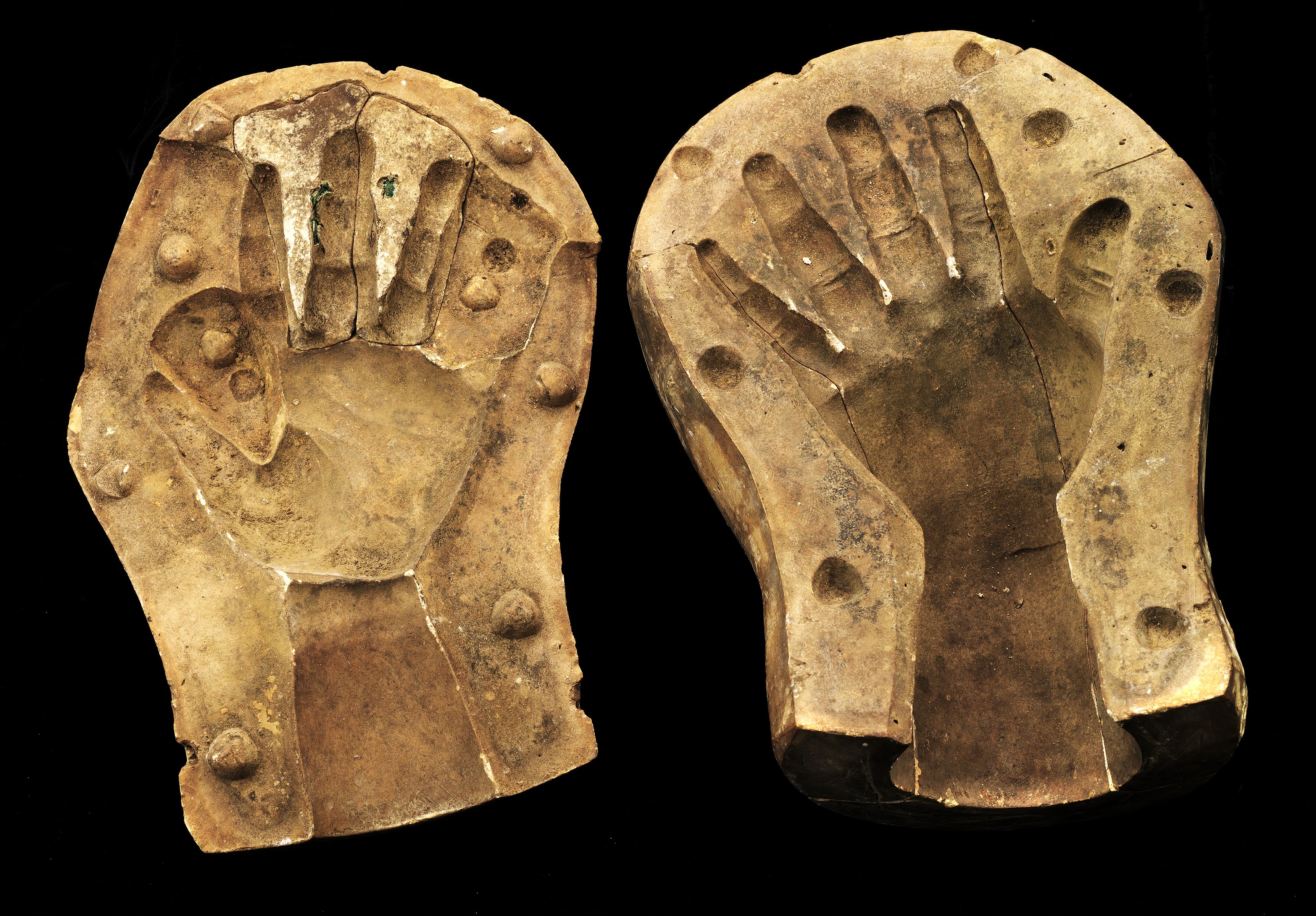 Powers was a majordomo who employed a group of highly specialized assistants to do the actual carving. One would do the rough work of blocking out the statue from the marble slab, another would carve the hair, another the drapery, and so forth.

This process, alien to modern ideas about works of art being the product of one mind and one set of hands, is a time-honored practice (like the workshop system) of Western art stretching back to the Renaissance and beyond.

The exhibition features a group of the original carving tools employed by Powersâ€™s assistants, along with several large calipers (used to measure proportions) from his workshop. Next to the tools are modern versions of the same instruments; very little has changed in their size and shape. The various cuts these tools make are seen in pieces of marble placed next to them. This is an excellent demonstration of how these tools were used to carve the Greek Slaves from rough block to finished product.

Powers was a talented mechanical inventor who used his studio workshop to make the tools he and his assistants used. He received patents for a number of tools, including a new type of vise; that patent application is also in the exhibition.

Capitalizing on the statueâ€™s fame, Minton and Company began marketing tabletop replicas in Parian porcelain (made from the original with a miniature pointing machine) as early as 1848. Other reduced replicas were made in plaster, stone, and bronze, all testaments to the fame of the original.

â€œMeasured Perfection: Hiram Powersâ€™ Greek Slaveâ€ is a rewarding exhibition, lacking only one thing: a marble version of the statue to compare with the full-sized plaster model.

Recently the National Gallery of Art acquired an important Greek Slave (now superbly installed in its own room) from the regrettably defunct Corcoran Gallery. This statue was purchased in the 1850s by William Wilson Corcoran, the wealthy Washington banker and Confederate sympathizer who originally displayed it in a special gallery in his museum (now the Smithsonianâ€™s Renwick Gallery) across from the White House.

Itâ€™s a shame that this Greek Slave couldnâ€™t be in the SAAM exhibition so that it could be reunited and compared to the plaster model, which gave it birth.

Fortunately the National Gallery is only a few blocks away and itâ€™s well worth the short walk.

III The power of James Burnham by Roger Kimball