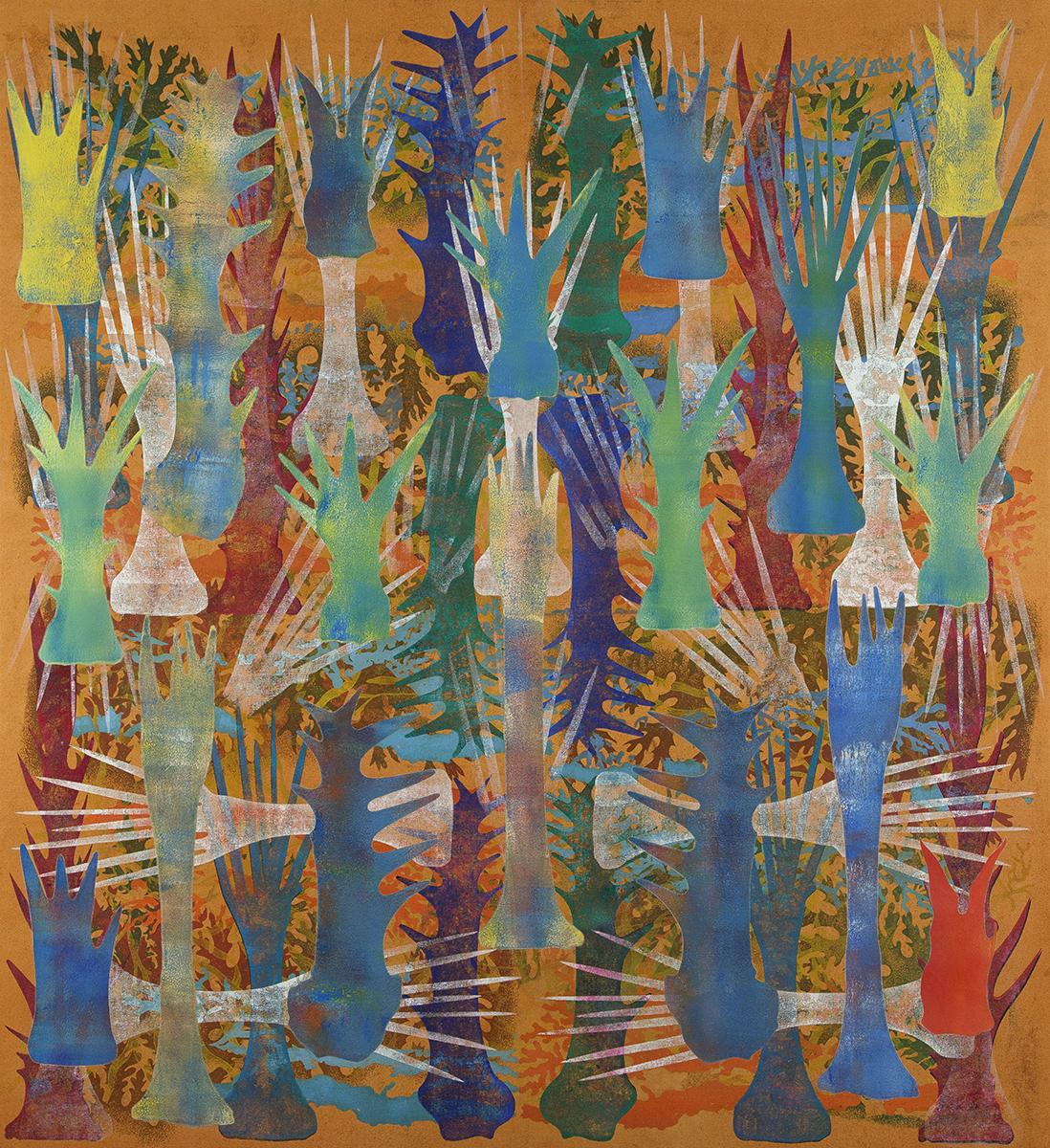 Philip Taaffe, Ophiuran, Prismatic (2014), Mixed media on canvas, 76 1/2 x 70 inches. © Philip Taaffe; Courtesy of the artist and Luhring Augustine, New York. From "Painting Is Not Doomed To Repeat Itself."

There may be no better indication of the health of contemporary painting than declarations of painting’s demise. “From today, painting is dead!” Every recent generation of art has faced such a prophecy. The painter Paul Delaroche gets credit for the original observation, attributed way back to 1839, the year that Daguerre first introduced his method of photographic duplication. In fact, it is this very rise of new reproduction technologies that tends to occasion painting’s supposed doom. After all, painting was itself at one time its own advanced reproduction technology, projecting the outside world onto the caves of Lascaux, receiving regular updates and tech support through the Renaissance with the development of oils and the portable canvas. So one might assume that the eventual arrival of even more advanced means of visual reproduction, whether it be the photograph or the television or the computer, would finally eclipse the need for trained specialists to simulate sight by spreading toxic liquids around a prepared surface. Painting either should or must give way to the new media of the times.

As it turns out, painting has shown remarkable resilience despite, or just as likely because of, the assumptions of its irrelevance. Perhaps the greatest boon to painting has been the notion of the quote-unquote “death of painting,” or at the very least an indication of its ongoing presence. Our own generation’s digital landscape has not driven artists away from paint. Instead we have seen a new flourishing of paint in the studios and galleries as artists have explored its modes of analog expression, whether as a form of revived older media, or as a way of transcending the limits of digital reproduction, or as a means of drawing some connection between the two, or because of some other motivation entirely.

Surprisingly, for some observers, painting’s continuing importance has still not spelled the death of the “death of painting.” Just the other week, Holland Cotter, a critic for The New York Times, bemoaned the recent “hype around painting, specifically abstraction, that has encouraged the equivalent of a fancy airport art for newly rich collectors.” For him, the only form of painting that still deserves attention “goes beyond a fixation on form to focus on ideas that tie art and artists to life.”

A year ago, the Museum of Modern Art came to a different but similarly narrow conclusion. In its first survey show of contemporary painting in years, called “The Forever Now: Contemporary Art in an Atemporal World,” MOMA focused exclusively on work that was turned in on itself—painting about the history of painting, or, even more likely, painting about the “death of painting.” As the critic John Yau observed, “by exhibition curator Laura Hoptman’s standards, the only choices open to a painter are copying, sampling, or being reductive.”

This past month at Hollis Taggart Galleries, Yau was the curator of his own exhibition meant as an answer to MOMA. The title said it all: “Painting Is Not Doomed To Repeat Itself.”1

Drawing on work that Yau hoped “testifies to painting’s resiliency, its ability to morph into something fresh and engaging,” the exhibition showed the wide range of painting being done today. While the work on view may have had “little in common,” as he claimed, Yau nevertheless focused on artists who “resist style and branding.” As Yau wrote in his catalogue essay, the artists in his selection make “uncategorizable hybrid objects. They work in oil, acrylic, and ink. They use brushes, spray cans, and silkscreens. They work on traditional stretched canvas, shaped canvas, multiple panels, and wood that has been cut up into blocks. They span everything from trompe l’oeil to abstraction, from image to language.” 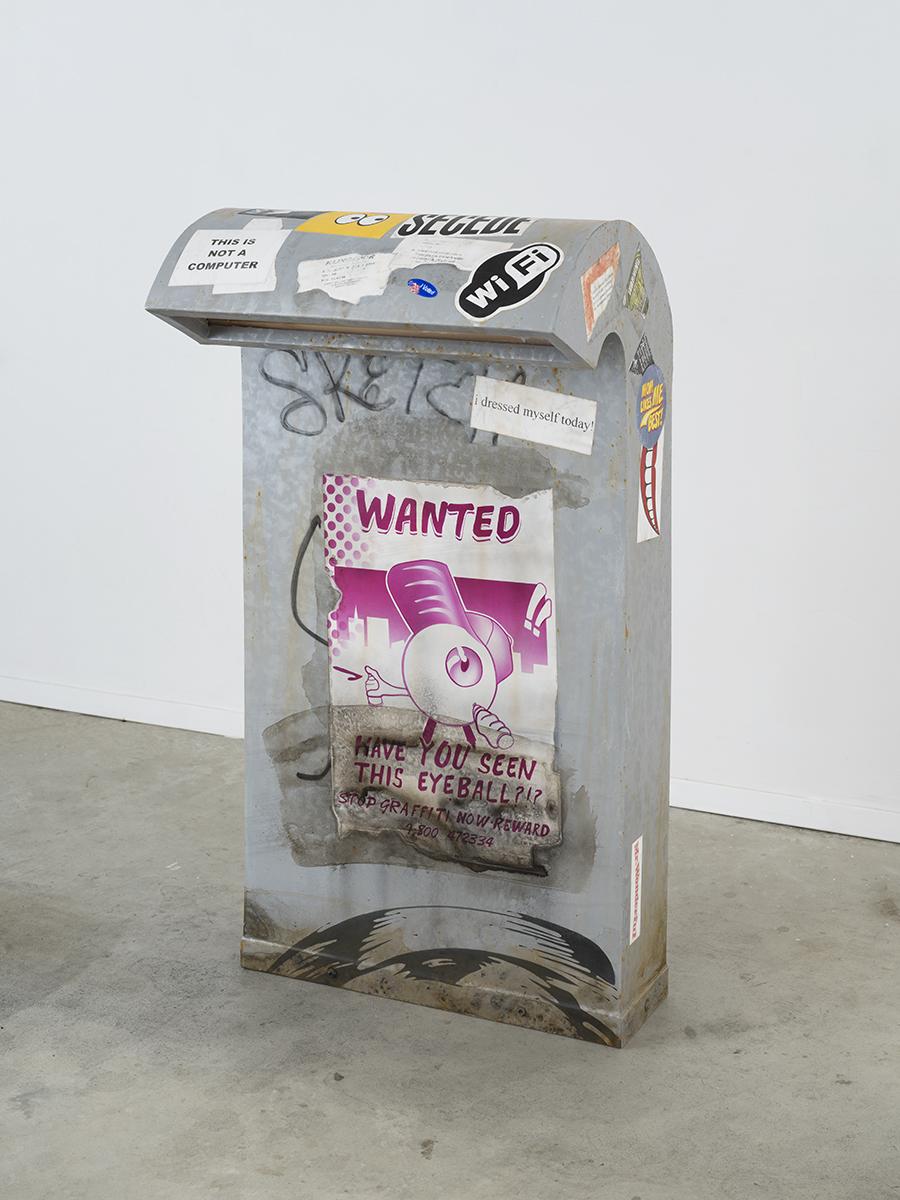 The sculptural paintings of Daniel Douke were a standout, or at the very least a remarkable demonstration of how far painting could go beyond what we think of as “painting.” Taking trompe l’oeil into the third dimension, Douke shapes his canvas into an astonishing verisimilitude of everyday objects but leaves one side open, so you can see the canvas, staples, and stretchers that make them up. There is no other way you could tell that Wanted (2014) is anything other than a galvanized steel street vent covered in graffiti and stickers. Or that Folding Table (2008) is an intricately hand-sculpted painting and not just another white molded plastic picnic table.

Much of the other work here was similarly hyper-expressed. Brenda Goodman tapped into paint’s hyperemotional pull through thick daubs of color; Catherine Murphy painted hyperrealistic images of cushions and reflections of furniture; Joshua Marsh amplified his colors and forms into a cross between Peter Saul and spray art; Philip Taaffe continued to explore his mastery of paint-based reproduction techniques that can range from stamps to stencils, silkscreens to paper marbling.

While demonstrating painting’s continued potential, the exhibition also approached visual incoherence. I wonder if such a show in fact comes out of an equal fallacy to “painting is dead.” Is it just as much of a rhetorical trap to exclaim that “painting is NOT dead”? Even if true, I worry that its declaration may be another side of a false argument, here overly broadening rather than narrowing our field of observation while flattening our perspective of painting from a process into a point. Painting is not “dead.” Nor is it flamboyantly “alive.” Painting just “is,” in infinite variety. 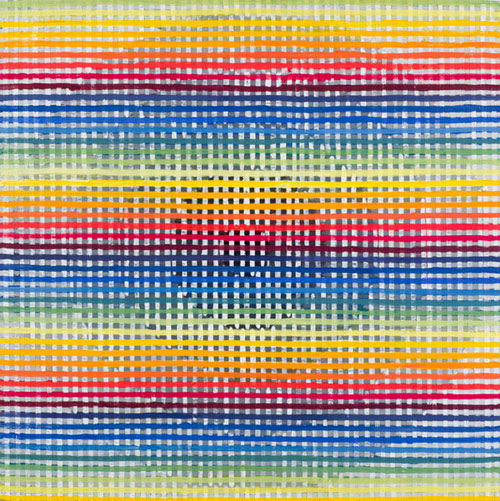 Last month the small non-profit Outpost Artists Resources, located in a row house in Ridgewood, Queens, continued its run of exceptional programming with a group exhibition called “Checkered History: The Grid in Art & Life.”2 Here sixty contemporary artists, many of them painters, used the grid to structure their compositions. Even as these artists came to the grid through a wide variety of means and for a wide variety of purposes, the show made visual sense. Assembled by David Weinstein and Ruth Kahn, who describe themselves as “curators, organizers, producers, and sheetrockers,” the exhibition also seemed to tease out some interesting conclusions.

The grid is a digital-like format that cuts against the analog mode of paint, which more easily lends itself to free forms than straight lines. The grid is the basis of classical perspective. To our contemporary eye the grid also references mechanical modes of reproduction, whether it be the moiré flicker of a television screen we might see in the work of Cathy Nan Quinlan or Rob de Oude, or the patterned designs of Robert Otto Epstein and Meg Atkinson that call to mind both machine-made textiles and low-resolution computer games. Here this final connection was made even more explicit through a video piece by Cory Arcangel of a hacked version of the Mario Bros. Nintendo game and textile computer chips by Crystal Gregory. 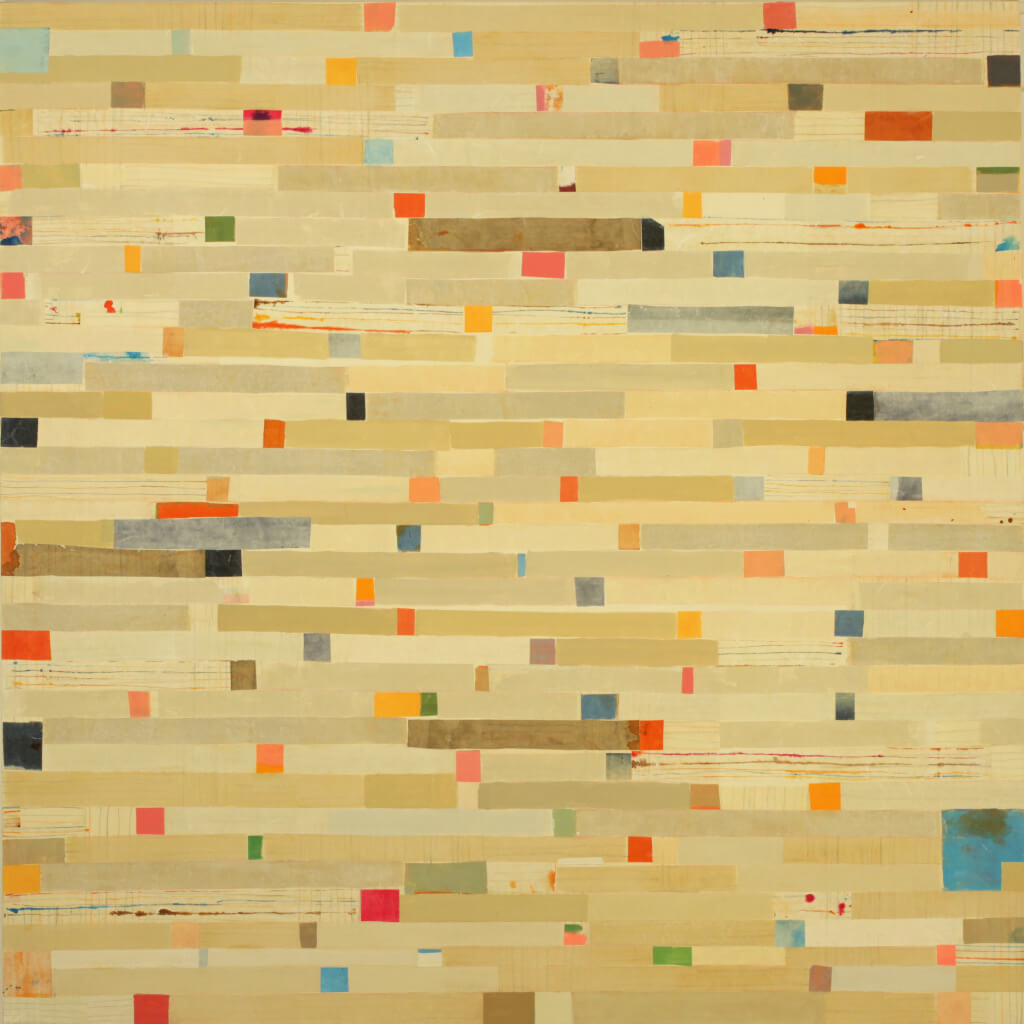 “Tempos: Selected Works by Elizabeth Gourlay, 2013–2015” at Fox Gallery NYC is another exhibition that sees the grid bringing structure to paint.3 I wrote about Fox Gallery in this space last January to praise the patterned paintings of Claire Seidl and Kim Uchiyama. I also wanted to draw attention to the pleasures of seeing a gallery exhibition in a domestic space—here, in the apartment of a gorgeous (and recently cleaned) terracotta pre-war building by Blum & Blum. Just last month Gourlay appeared in the flat files of the exhibition at Odetta Gallery on “seeing sound.” For Gourlay the painterly sound is rhythmic. She mutes her colors of melody to emphasize the syncopation of her forms. In her large square canvases, often named after instruments, she she uses collage to layer horizontal strips of paper that have been tinted along their edges, then adds additional squares of paint like regular punctuations. In other examples she stacks her square blocks of color. In others she plucks an edge into a triangle. The overall results are quiet and harmonic, like an ensemble of world music in otherworldly form, here arranged in sublime surroundings. 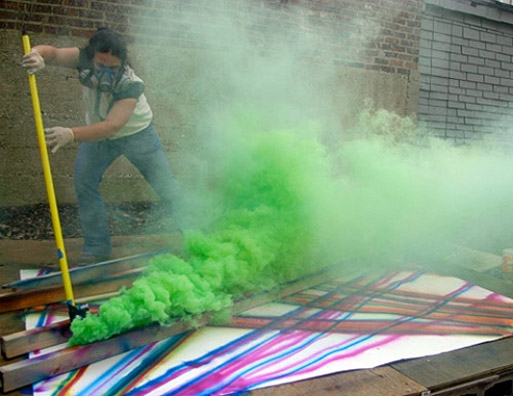 Rosemarie Fiore, an artist in "Diphthong," creating a Firework Drawing.

“Diphthong” is yet another exhibition that relates to artists who appeared here last month: both Gelah Penn, part of “seeing sound” at Odetta, and Stephen Maine at Hionas Gallery.34 At the Shirley Fiterman Art Center at the Borough of Manhattan Community College, a block north of Ground Zero, Penn and Maine are the co-curators of this group exhibition of seventeen artists working in “process-based abstraction.” Coming out of the post-Minimalist movement of the 1970s, the idea of “process” art is that the means of fabrication become a subject of the art’s completion. In practice, and as revealed through the range of materials and forms in this exhibition, process artists employ unorthodox modes of production to reach unusual conclusions. For example, there is the evocative imagery that can result from Maine’s own process of stamping carpet textures onto canvas; or the “acrylic, stains, and spray paint on wood panel” by Jaq Chartier that somehow come to resemble photographic emulsion; or the acrylics on canvas by Thomas Pihl of subtly gradated color that seem like translucent screens of light. At its best, letting the process take over the project removes the intentions of design and lets more distant visions come through. At the same time, I want to know how this work is made, and I wouldn’t mind some additional transparency. Process artists are known to be resistant to explanation, but what might be lost in mystery would be more than gained in understanding. 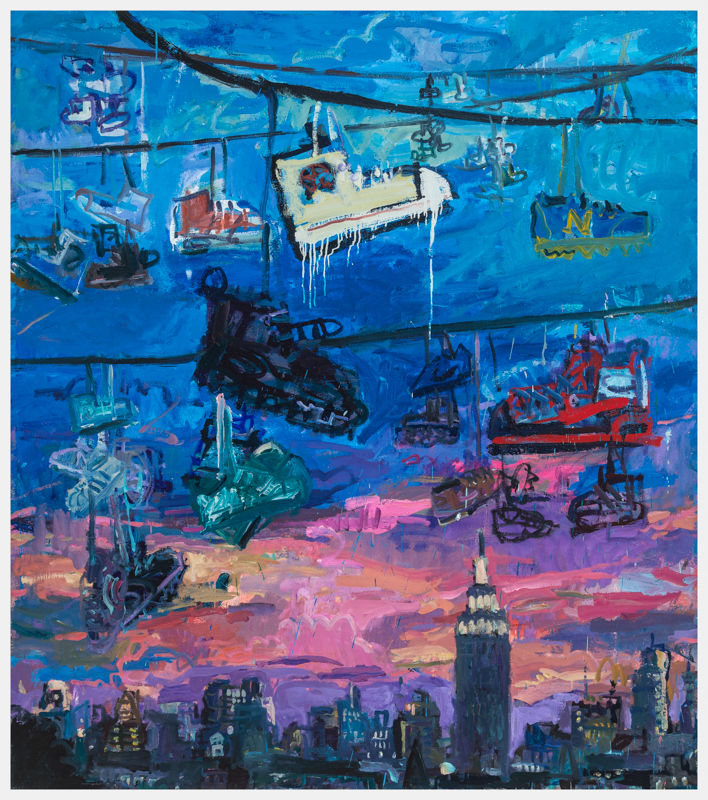 This month two Bushwick-area galleries serve as bookends to the story of paint in the contemporary scene. Through different styles, both demonstrate how today’s overriding sense for paint is one of joyous affection. Against the ash heaps of our digital world, the boldness of paint, its colors and its textures, gets fully embraced.

At Life on Mars, Todd Bienvenu indulges in the paint-heavy brush to create cartoonish fantasies of our prosaic environment.45 In some cases this can be a trash can filled with flowers, or sneakers hanging from lampposts. It also looks back to childhood fantasies: an epic-sized treehouse, women by the pool, or ringside at a professional wrestling match, with garish colors and bulky modeling that recall sixteen-bit video games. 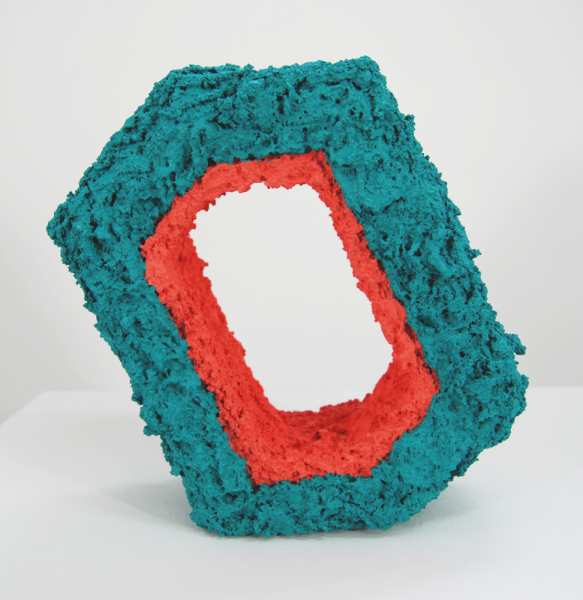 Nearby at the new Stout Projects, the abstract painters Paul Behnke and Matthew Neil Gehring layer pools of painted color (Behnke) and gestural strokes (something new for Gehring).6 At Stout this fun is foregrounded by the work of Rebecca Murtaugh. Working halfway between a painted sculpture and a sculptural painting, Murtaugh shapes “reclaimed house paint” into clotted masses that resemble minimalist sculptures covered in riotous growths of medium and pigment. Murtaugh calls these “apertures,” for their ocular forms. For me, I just want to look through, look at, and touch these crazy things, which are head-over-heels valentines to paint.

1 “Painting Is Not Doomed To Repeat Itself” was on view at Hollis Taggart Galleries, New York, from September 24 through October 31, 2015.

2 “Checkered History: The Grid in Art & Life” was on view at Outpost Artists Resources, Queens, from October 2 through October 30, 2015.

4 “Diphthong” opened at the Shirley Fiterman Art Center, New York, on September 29 and remains on view through November 14, 2015.

5 “Todd Bienvenu: Exile on Bogart Street” opened at Life on Mars, Brooklyn, on October 9 and remains on view through November 8, 2015.

III Why the art world is a disaster by Roger Kimball

V The condescending smile of the supreme enchanter by John Simon