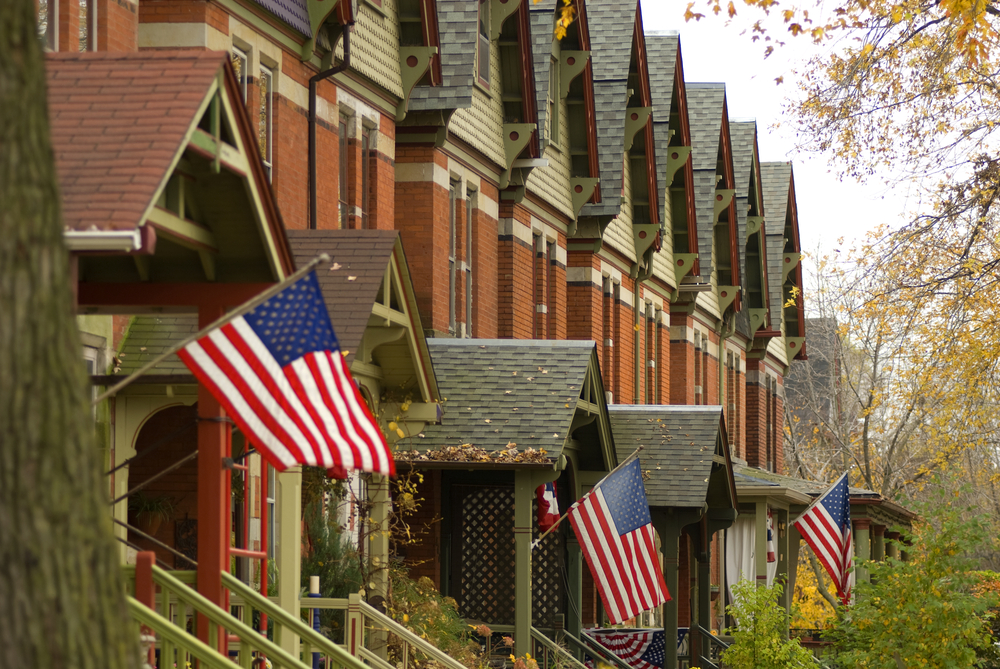 Looking around the world at the end of August 2014, we are reminded of a remark attributed to the philosopher Yogi Berra: “It’s déjà vu all over again.” On the domestic front, some say it’s 1967, some 1972. (When we think about international affairs, can anyone avoid thinking about 1914? Several pieces in this issue touch on the centenary and its echoes.) In 1972, the Vietnam War was still raging and George McGovern was campaigning on the slogan “Come Home America!” That worked out well. The decade we denominate “The Sixties” only started in the 1960s. It reached a first maturity in 1967, perhaps, but did not really go mainstream—did not, that’s to say, defeat all but isolated pockets of resistance—until the 1970s. When did it end?

The death or eclipse of The Sixties has been forecast repeatedly. The ascension of Ronald Reagan was supposed to have heralded it, as were the fall of the Berlin Wall and the disintegration of the Soviet Union. Then we had the terror attacks on September 11, 2001, which were widely predicted as ushering in a new, more serious age. At the beginning of his remarkable book Who Are We? The Challenges to America’s National Identity, the late Samuel Huntington recalled a certain block on Charles Street in Boston. At one time, American flags flew in front of a U.S. Post Office and a liquor store. At some point, the Post Office stopped displaying the flag, so on September 11, 2001, the flag flew only in front of the liquor store. Within two weeks, seventeen American flags decorated that block of Charles Street, in addition to a huge flag suspended over another nearby street. “With their country under attack,” Huntington noted, “Charles Street denizens rediscovered their nation and identified themselves with it.”

There is perhaps nothing less characteristic of the spirit of The Sixties than frank displays of pro-American sentiment—unless it is restrained displays of emotional reticence. But it was not long, as Huntington points out, before the flags on Charles Street began to disappear. By the time the first anniversary rolled around in September 2002, only four were left flying. True, that is four times more than were there on September 10, 2001, but it is less than a quarter of the number that populated Charles Street at the end of September 2001.

What happened on Charles Street happened in many places around the country: a rash of flag waving followed by a relapse into indifference. Does it mean that the sudden upsurge of patriotism in the weeks following 9/11 was only, as it were, skin deep? Or perhaps it merely testifies to the fact that a sense of permanent emergency is difficult to maintain, especially in the absence of fresh attacks. Is our sense of ourselves as Americans patent only when challenged? “Does it,” Huntington asks, “take an Osama bin Laden . . . to make us realize that we are Americans? If we do not experience recurring destructive attacks, will we return to the fragmentation and eroded Americanism before September 11?”

We hope not. But the jury is still out on that question. Meanwhile, we’ve had other bulletins announcing the final interment of The Sixties. The Great Recession, which started in 2008 and lasted until . . . well, we were going to supply an end date, but, despite the surge in equities these last few years, is it really clear that we have come to the end of the economic dégringolade that swept the world in the fall of 2008? Take a look at the growth rates and debt levels of affluent Western nations before you answer.

One of the great issues of The Sixties revolved around the unfinished business of race. What began in an access of hope and optimism in the Civil Rights Movement turned suddenly nasty as the 1960s wore on. We had supposedly put all that behind us, definitively so when Barack Obama was hailed as America’s first “post-racial” President. That hasn’t been working out so well, as Obama’s involvement in episodes from the Cambridge Police and Dr. Henry Louis Gates Jr. to the Trayvon Martin–George Zimmerman case a few years later attest. As we write, the nation’s attention is focused on Ferguson, Missouri, where Michael Brown, an unarmed eighteen-year-old black man, was shot and killed by the white Ferguson police officer Darren Wilson. There followed an angry spate of rioting and looting in Ferguson, prompting Missouri Governor Jay Nixon to declare a state of emergency. Governor Nixon, eyes on the polls, also called for a “vigorous prosecution,” which surprised some since, when he spoke, no criminal charges had been filed. Not that that stopped Attorney General Holder from annoucning that he was traveling to Ferguson to oversee personally a “civil rights investigation.”For days, the nightly news was full of alarming images of police in combat gear astride military vehicles bedecked with machine guns and other weaponry more suitable for a war zone than urban conflict on an American street. What were these militarized minions doing in America? Echoing U.S. rhetoric during the so-called “Arab Spring,” Egypt urged authorities to exercise restraint in dealing with protestors. That must have given pleasure to Cairo. Dozens of reporters have been arrested in Ferguson; some reportedly were assaulted by the police. Al Sharpton, with an unerring nose for notoriety and (perhaps more to the point) potential profits from lawsuits and demagoguery, was on the scene. Some observers forecast a lawsuit against the city in the hundreds of millions of dollars.

What happened? As in the Trayvon Martin case, the first reports we heard made it seem that the victim, a “gentle giant” according to some early reports, was guilty of nothing more than “walking while black.” The unarmed teenager (the Associated Press violated its own style book in describing him as “a youth”) was said to have had his hands up when he was wantonly gunned down. But almost immediately a different story emerged. It turns out that Brown and an accomplice had earlier robbed a convenience store. A video clip of Brown manhandling a diminutive store clerk during the robbery was released by the police. That put paid to the “gentle” story (but confirmed “giant”). Wolf Blitzer, a reliable barometer of conventional liberal opinion, castigated releasing the video as “a smear.” The police also provided a very different account of what happened. According to the police, Wilson had stopped the pair when he saw them walking in the middle of the road. When Wilson attempted to exit his car, the police said, he was pushed back into the car by Brown. A scuffle inside the car between Brown and Wilson ensued, during which Wilson suffered an orbital eye socket fracture and Brown attempted to seize Wilson’s gun. At least one round was fired. Brown ran out of the car with Wilson in pursuit. Brown then turned and charged Wilson, who fired six shots, killing Brown.

Which is the true story? We think The Wall Street Journal’s Jason Riley was prudent when, in the course of an interview, he declined “to litigate this in the press” before all the evidence was in. Riley also went on to offer an exemplary caution about the “false narrative being pushed out there by folks like Michael Eric Dyson and [Al] Sharpton and the rest of the hustlers . . . that black men live in fear of being shot by cops in these neighborhoods.” Riley described that contention as “nonsense.” “I know something about growing up black and male in the inner city.” he noted, “and it’s not that hard to avoid getting shot by a cop. They pull you over, you answer their questions, you are on your way.” He continued:

Seven Killed, 29 Wounded In City Shootings Over Weekend.” That headline from Chicago on August 18 is not at all unusual, and if one looks at the details, the overwhelming majority of shootings are, as Riley observes, black people shooting other black people.

Why? Who or what is to blame? There is a lot to be said, we think, for the commentator Roger L. Simon’s observation that Lyndon Johnson’s so-called “Great Society” programs must bear a lot of the blame. “Ferguson,” Simon wrote, “is the Great Society writ large because the Great Society convinced, and then reassured, black people that they were victims, taught them that being a victim and playing a victim was the way to go always and forever. And then it repeated the point ad infinitum from its debut in 1964 until now—a conveniently easy-to-compute fifty years—as it all became a self-fulfilling prophecy.”

Writing in City Journal’s online edition, the historian Fred Siegel rightly decried the “grotesque pantomime of repression and redemption, riots and never-quite-achieved rewards,” which have played out time and again since the 1900s. “The chaos in Ferguson,” he points out,

is but the latest episode of this long, sad drama of resentment and revenge. The drama persists in part because so many journalists and academics, not to mention black activists, have so much invested in it. It’s the conceptual air that they breathe. Sadly, to paraphrase the philosopher Ernest Gellner, some failed practices cannot be the subject of reconsideration, because they already shape the way we think.

It is disconcerting to realize how profoundly the pathologies of The Sixties continue to shape the way we think, and by “we” we mean not just activists, academics, and journalists. The rot goes all the way to the top. Obama stopped short of saying that if he had had a son, he would have looked like Michael Brown, but his few public utterances about the event were, as Powerline’s Scott Johnson observed, “full of the reigning leftist clichés, even retrieving the ‘anger’ of ‘looting’ and ‘carrying guns’ from the dustbin of the sixties. Frantz Fanon must be making a comeback among the White House speechwriters,” Johnson observed, and he wondered “What next? Perhaps R. D. Laing and The Politics of Experience. You know, reality is crazy, man, and mental illness is a path to transcendence.”

Santayana famously said that those who don’t remember the past are condemned to repeat it. It is extraordinary, we think, that the United States should be poised to tread once more down a path whose unprofitable destination we know all too well.