The New Criterion on poetry 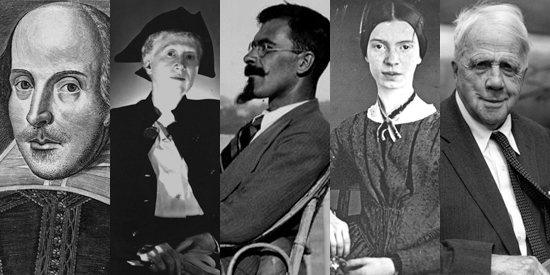 For more than a decade, The New Criterion has devoted a large portion of its April issue to poetry, offering both an expanded section of verse (we are particularly proud of “More Like the Stars,” Christian Wiman’s haunting meditation on mortality) and a clutch of reviews and essays on poets and their art.

There are many reasons that we devote special attention to poetry, beginning with the centrality of the art in the patrimony of human culture. Whether poetry continues to occupy a central position—or even a position of importance—in the hurly-burly of contemporary culture is an interesting, and doubtless an open, question. To be sure, every teacher, and probably most parents, “approve” of poetry (if not necessarily of poets). Poetry is one of those certified “good things” of which one is naturally in favor. But approval does not entail acquaintance, let alone mastery. Nor does it entail the vitality of the thing approved. An interesting history might be written of those human activities that, from the point of view of established taste, have made the journey from urgent requirement through commendable accomplishment to respectable curiosity. It pains us to acknowledge that poetry would probably merit a place in that melancholy narrative.

We hasten to add, however, that the same might be said for much traditional cultural endeavor—much, that is to say, that figures centrally in the concerns of The New Criterion. We devote significant attention to poetry not because of its ranking on the bourse of cultural popularity but because of its intrinsic power and deep roots in the story of humanity’s adventure in time. We live at a moment when many of the institutions traditionally entrusted to safeguard and transmit that power have passed on to other, more demotic entertainments. One marker of that passage is velocity. Woody Allen once quipped that he took a speed-reading course and was able to get through War and Peace in ten minutes. “It’s about Russia,” he deadpanned.

One of poetry’s great gifts is to offer us lessons in slow reading. By resisting the intelligence “almost successfully,” as Wallace Stevens put it, poetry trips us up, slows us down, makes us pause to consider, to deliberate, to savor. The resistance is as important as the ultimate success. Sometimes, indeed, it is the success. The cognitive friction that poetry involves is especially valuable at a time when speed is king. The risible idea of reading War and Peace in ten minutes underscores the philistinism of confusing reading with the acquisition of information. In “Burnt Norton,” the first of his Four Quartets, T. S. Eliot lamented being “distracted by distraction from distraction.” That was before the term “sound bite” had been coined, before the internet and its proliferating goads to the inattentive attentions of the instantaneous: to email, Facebook, Instagram, and Twitter. In New Grub Street (1891), George Gissing satirizes the journalistic mores of his time. Toward the end of the novel, a few characters are discussing a new publication designed to appeal to “the quarter educated, the young men and women who can just read, but are incapable of sustained attention.” Its working title is Chat, but that is too weighty. In order to succeed, it needs to be rebaptized. “Chat doesn’t attract anyone, but Chit-Chat would sell like hot cakes.”The contents would be true to the title: “No article in the paper is to measure more than two inches in length, and every inch must be broken into at least two paragraphs.” Twitter, weighing in with a maximum of 140 characters per Tweet, further perfects this dream.

It may be worth noting that poetry, like all human activities, is susceptible to perversion. There are contemporary “schools” or movements of poetry that endeavor to exploit, rather than resist, the aimless detritus of our digital cacophony, glorying in new variations of the aleatory. But there is also “music” indistinguishable from tribal grunting. Back in 2011, The New York Times, that reliable chameleon on the motley of the moment, breathlessly reported that “there’s evidence that the literary flowering of Twitter may actually be taking place. The Twitter haiku movement—‘twaiku’ to its initiates—is well under way.” We don’t doubt it. But while such phenomena may provide employment for sociologists, anthropologists, and specialists in mental and psychological incapacity, they have little to tell us, except by way of contrast, about poetry in any vital sense.

If poetry is the enemy of speed-reading, it is an ally of Mnemosyne, the titaness of memory. In his splendid essay in this issue, “Sound & Sensibility,” David Yezzi quotes W. H. Auden’s memorable definition of poetry as “memorable speech.” We cannot, for example, encounter Auden’s poem “September 1, 1939,” without ever after remembering the poet in that dive on “Fifty-second Street/ Uncertain and afraid/ As the clever hopes expire/ Of a low dishonest decade.” In our increasingly disposable culture, poetry waves the flag of permanence. It musters memory against the onslaughts of ephemera. Robert Frost may have overstated the case when, in 1915, he advised his friend Louis Untermeyer to “Take care of the sound and the sense will take care of itself.” But to say that a case is overstated is not to deny that there is a case that’s been made. Mr. Yezzi provides a patient and revelatory examination of the “aural emblems” of Frost’s great poem “Mending Wall.” “In the music of the poem,” he writes, “Frost engages the abstract vitality of our speech.”

Frost creates an aural analog of the poem’s meaning, in which the sound is the sense. The compulsive divisions in the language . . . work out that division in the ear. I’m not sure if this fundamental structural principle in the poem has been elaborated previously; if it has, I am unaware of it. All I can say is that I first heard it before I saw it.

Poetry,” wrote T. S. Eliot, “communicates before it is understood.” What it communicates is the pressure of emotional, not propositional, truth. Poetry conjures with the music of the matter, not the matter of fact. It is part of the sly candor of language that when we have memorized something we say we have it “by heart.” The pressure that sound and rhythm exert upon memory is more material than mental, more a matter of felt presence than calculated result. It is what Wallace Stevens called “the motive for metaphor,” “shrinking from/ The weight of primary noon,” the definite, discursive “A B C of being,” in favor of half seasons, of fall, of spring and “the half colors of quarter things,”

things that would never be quite expressed, Where you yourself were never quite yourself And did not want nor have to be . . .

In Poetic Meter and Poetic Form, the critic Paul Fussell adduces William Blake’s “The Sick Rose” to underscore what we might call the semantics of sound, the reason behind the rhythm. “The whole poem,” Fussell writes, depends upon one crucial substitution.”

O Rose thou art sick. The invisible worm, That flies in the night In the howling storm: Has found out thy bed Of crimson joy: And his dark secret love Does thy life destroy.

"All goes swimmingly,” Fussell observes, “until line seven.” The iambic-anapestic rhythm trips along pretty regularly. Then this happens: “And h?s/dark sec/ret love . . .” The spondee—it’s the only one in the poem—is the rhythmic and the semantic consummation of the poem. “The meter conducts the argument,” Fussell writes. “The meter is the poem.” The imagined botanical tragedy achieves a sharp and sudden humanity because of Blake’s cunning metrical deployment.

"It’s about Russia.” Poetry is an ally of civilization because it brings that speeding vehicle to a skidding stop. What’s the payoff, the cash value, the “real-world” take-away? Only accumulated protestations of the human heart. Only that. Comparing our civilization’s “gigantic technological structure, a skyscraper almost high enough to reach the moon,” the critic Northrop Frye observed that poetry “never speaks unless we take the time to listen in leisure, and it speaks only in a voice too quiet for panic to hear. And then all it has to tell us, when we look over the edge of our leaning tower, is that we are not getting any nearer heaven and that it is time to return to earth.”

I Not quite right by Glenn Ellmers

The New Criterion on poetry