If there’s a Godfather to the Bushwick painting scene, it’s Chris Martin. Let me disambiguate this statement by clarifying, first, that I don’t mean Chris Martin, the premier New Zealand cricketer, Chris Martin, the “Play” of the rap duo Kid n’ Play, or Chris Martin, the frontman of the English pop band Coldplay. I mean Chris Martin, the artist born in Washington, D.C. in 1954, who has been a Brooklyn fixture since sharing a studio building with Katherine Bradford in Williamsburg in 1980. This Chris Martin has been around for a while—he dropped out of Yale to move to Soho in the prehistorical year 1976—but his paintings only seem to get younger with age. And the kids love him for it.

Perhaps more than any other Williamsburg painter who moved east to Bushwick, Martin brought an insouciance that has clearly impressed the neighborhood’s younger set. His appearances in Bushwick group shows always seem to be cause for excitement. His exhibition program in Chelsea is celebrated and closely watched. Now, after several years at the gallery Mitchell-Innes & Nash, Martin has arrived at Anton Kern for his first solo show under new representation.1

Martin’s youthfulness is both felt and cultivated. He inherited the boldness of Soho’s 1970s post-minimal painters and processed it through 1980s neo-expressionism (especially the work of the German polyglots Sigmar Polke and Anselm Kiefer) to arrive at an abstract aesthetic that radiates outer-borough otherness—while still appearing big enough for Chelsea. In 2011, the writer and painter Sharon Butler identified the style of abstraction Martin inhabits as a “new casualism,” where a “studied, passive-aggressive incompleteness” and “multiple forms of imperfection” lead to work that is “off-kilter,” “overtly offhand,” and “not-quite-right.” Butler meant this as praise. Other critics have been less flattering. “Crapstraction” has been one label of opprobrium. For this style, “Zombie formalism” is another. Coined by Walter Robinson, popularized by Jerry Saltz, “Zombie” may one day be transformed from insult into the style’s top-shelf brand name, following the trajectory of nearly all enduring terms in modern art.

Good paintings are often the results of bad mistakes. So Martin paints like he knows nothing, and he knows he knows nothing, deliberately fumbling towards the end zone. He says he stashes his many failed canvases in the boiler room while mixing the winners and the best efforts into an oeuvre of quixotic could-have-beens. Of course, you can’t “de-skill” a painting without skill, just as you can’t take the “story” out of art history (or something like that). So it helps that Martin starts with ample reserves of artistic ability and historical awareness. As a boy in Washington, he grew up surrounded by art and artists. In an interview with The Brooklyn Rail (which has long championed his work), he describes growing up in a home featuring a life-size portrait by Sir Thomas Lawrence, which his mother had inherited and displayed in an elaborate wooden frame. Art teachers, artists he encountered along the way, the music of James Brown, and a magic mushroom he swallowed forty years ago, all seem to influence his paintings. 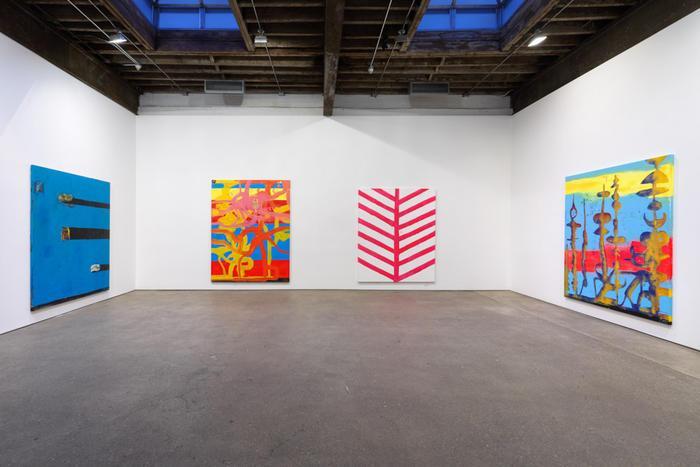 At Kern, Martin’s latest paintings are particularly indebted to the bold figure-ground dynamics of the Soho school. Certain motifs seem to come right out of recent work by Thornton Willis and other masters of the hard edge and the dissolving form. But then Martin funks them up. In a new monograph published to accompany the current exhibition, Martin describes his affection for Bill Jensen, who would leave his paintings outside to “season” them in the snow and rain.

Here Martin takes this literally, not only rough-handling his canvases, dragging them around his place in the Catskills, probably dropping them once or twice, but also dashing them with copious amounts of glitter to season the mix. On several paintings, overlaying the studied edges, he works in whole bands of the sprinkled stuff. Sometimes his glittery forms take on their own sculptural shape, as Martin adds a gradient shadow, recalling Yves Tanguy’s surrealist landscapes and his own recurring mushroom motif. Elsewhere, as in Chameleon (2014), they streak across the compositions like drippy bedazzled brushstrokes. Sometimes he leaves them out, as in Tree (2014), where Martin allows hard-edge acrylic underpainting to stand on its own. In his largest work, Space is the Place (2014), over eleven feet tall by nine feet wide, set in its own gallery, the glitter becomes an all-over rainbow abstraction. And sometimes Martin does something else entirely. One painting here is on aluminum foil. Others mix in images from magazine pages and whatever else happened to stick to them. I especially like one painting that incorporates a diagram of the human gastrointestinal system languishing in Pepto-Bismol pink.

One could see these desultory compositions as an untucked insult to abstract art. But one can also see Martin as celebrating the history of painting like an Uncle Sam juggling on a unicycle. He’s the most patriotic guy at the Fourth of July parade. He’s over the top. He’s having fun. “Sometimes a bad painting is a brave and uncharted investigation beyond one’s own good taste,” he explains in an interview in the Kern monograph, “and sometimes it’s just a really bad painting. Humor is a serious indicator that something interesting is happening.” Similarly, sometimes tackiness is just tacky, sometimes it can be overly tactful, but sometimes it clears out space for other possibilities. Or at least it gives us license to wear polka dots with plaid.

One heretofore undiscussed avenue of Martin’s painterly trip has been his work in art therapy. After riding the ups and downs of the Eighties art market, Martin went back to school to train as a therapist at the School of Visual Arts. He then worked for fifteen years on the front lines of an AIDS day treatment program with a population that could be homeless, mentally ill, and chemically addicted. The experience clearly affected him. It also wiped him of a great deal of artistic angst while broadening his sense for materials. The process of painting can be its own restorative balm, glitter and all.

More should be said about those who work in this unsung vanguard. I don’t mean the calculated avant-garde of the contemporary salon aesthetic, or some token outreach program that looks just good enough for the Annual Report and an NEA Arts Education grant. What I mean are those artists and institutions that use art to reach people who are genuinely in need and underserved by our rich visual culture.

This thought occurred to me while visiting the Visual Arts Center of New Jersey, an institution that forgoes the glamour of auction-name artists and starchitect build-outs for serious art and serious work. Founded in 1933, inhabiting a building that got the short end of the Brutalist stick (was there a long end?), the Visual Arts Center is nothing to look at. Nor did I find much to see between highway interchanges on my hour-long drive from New York City to the town of Summit. Yet behind its corrugated concrete exterior, as New Jersey’s “largest institution dedicated exclusively to viewing, making, and learning about contemporary art,” the Visual Arts Center is a hive of artistic activity, with teachers giving stand-and-deliver sermons and young artists making and engaging with the art on display. One of the missions of the Center is to “provide quality education programs to underserved audiences, such as the elderly, persons with special needs, and children from low-income families.” Check, check, and check.

Yet the Center also demonstrates a particular respect for its constituency by mounting an exhibition program, curated by Mary Birmingham, that is rigorous, vigorous, and uncompromised by any false sense of cultural relevance and equivalency. Now on view (and a perfect example of this program) is “Doppler Shift,” a smart group show of what might be considered contemporary optical art.2

“Doppler Shift” began as a suitcase exhibition that the artist Mel Prest packed through Europe in 2012. A version went on view at Brooklyn’s Parallel Art Space in 2013. With every stop it became enlarged and refined. The current exhibition brings together many of those underappreciated artists who interest me most these days: Steven Baris, Rob de Oude, Gabriele Evertz, Enrico Gomez, Gilbert Hsiao, Stephen Maine, Don Voisine, and (upstairs in a related installation) Gary Petersen. I was dazzled by the well-handled triangles of Joanne Mattera’s Chromatic Geometry 21 (2014), the rippling starburst of Edgar Diehl’s Jupiter Landung IV(2014), and the trompe l’oeil skills of a delicate sculptor whose birth name, she insists, is Gay Outlaw (she was born in Alabama).

The term “optical art” never looked right to me. “Anti-optical” might be better. First used in the mid-1960s, optical or “Op Art” refers to paintings and sculptures that elicit some kind of sensory effect in the viewer. In fact, through particular arrangements of color and line, here is art that is united in cutting against straightforward opticality by challenging how our brains process visual information.

Back in June 2009, in this column, I looked at how “Op,” a term that was coined in the mid-1960s, quickly went from the art world’s next chapter heading—Pop to Op—to an historical footnote. You might say that Op was co-Opted by the design industry, which found its patterns easy to reproduce, and the drug industry, which saw a kindred spirit in its cognitive short-circuiting.

But Op may be our most immediate contemporary style, requiring little prior understanding of what good art is supposed to be. As Dave Hickey wrote for “Optic Nerve,” a 2007 exhibition that brought some depth to the dazzling surfaces of Op (and quoted in the current catalogue by Thomas Micchelli), “Optical art introduces us to an order of experience that is less voluntary and less dependent on education and conscious knowledge than one might wish.” All the more reason to join the broad constituency of the Visual Arts Center in appreciating “Doppler Shift” firsthand. 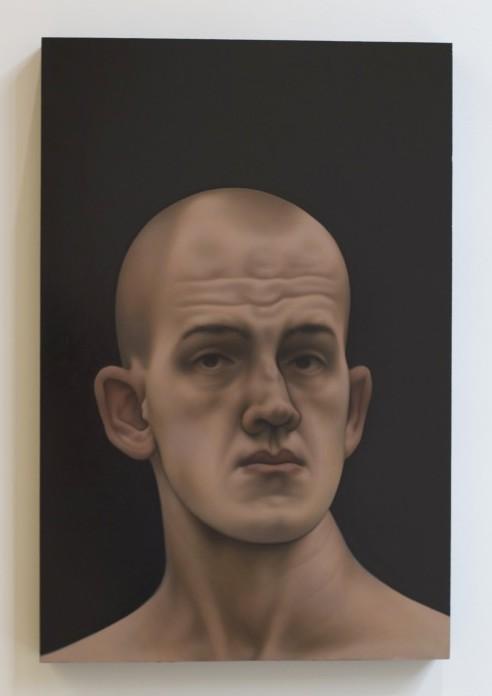 We live in selfie times. With the advent of the front-facing camera, it should be safe to say that humanity has not seen such a period of self-reflection since the invention of the mirror. The young self-portraitist Matthew Miller has been wrestling with this fact since even before the development of the flip phone. His stunning Old Master abilities are straight out of the Northern (Bushwick) Renaissance. In June 2011 I led this space with a discussion of his blockbuster show that just about blew up the basement of the formative Ridgewood gallery known as Famous Accountants. Now the gallerist Austin Thomas has brought Miller to her new Chelsea outpost Hansel and Gretel Picture Garden Pocket Utopia.3

After the 2011 show, I wondered how Miller would move along from his oddly furrowed self-portraits over oily black background. I am glad to see he never did, instead doubling down on the intensity of his painterly self-analysis, which might see him lay down dozens of thin layers of oil over a single image, microscopically shifting it through every pass. His self-portraits continue to haunt with their skewed glances that track your movements no matter where you go (to answer how he makes this possible, he will be in the gallery for a talk on November 15). I am glad Miller has dispensed with attempting to portray others, which always lacked the same intensity. In some paintings, he has also brought some of his self-making tools into the frame—a paint brush that touches an edge, a carved block of wood. If only he had included an iPhone 6, he might have created the image of the century.

3 “Matthew Miller: Can’t You See It, I Am One” opened at Hansel and Gretel Picture Garden Pocket Utopia, New York, on October 16 and remains on view through November 22, 2014.

I Magnifying old mistakes: the situation in France by David Pryce-Jones

II The perversions of M. Foucault by Roger Kimball

III The bolter, or the Chatwin case by Robert Messenger