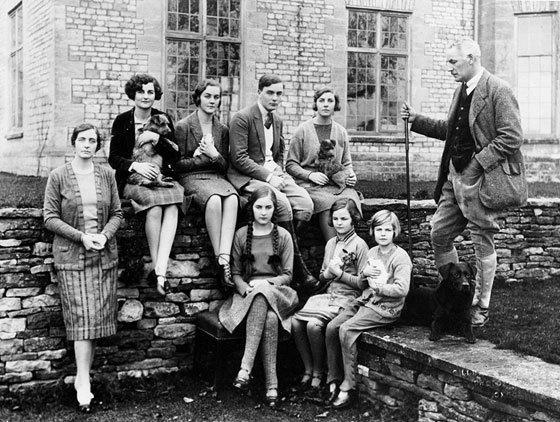 The funeral of Deborah, Duchess of Devonshire, brought to mind Robert Browning’s poem “My Last Duchess,” in the sense that duchesses aren’t what they used to be, but here was perhaps the last one who lived up to the image. She was ninety-four. The service took place at Chatsworth, the historic house in Derbyshire built for the Dukes of Devonshire to the design of Capability Brown. Next day, The Times carried photographs of the mourners in a procession led by Prince Charles and his wife, a much less duchessy duchess, both of them in deepest black. Some of these two hundred mourners had been given first-class train tickets from London. Six hundred members of the staff also attended, “dressed in traditional attire,” whatever that might be.

“She was generally addressed as Your Grace. I even saw people curtsey to her. Somehow one felt that one must wear a tie in her presence,” wrote Charles Moore, the biographer of Margaret Thatcher and a man of good sense. His tribute in the Daily Telegraph rose to a crescendo: Her life had provided “the full idea of aristocracy, with its duties and its dynasties, its seasons and its splendours.”

Nothing gives me the right to refer to her as Debo, but everyone else did, as though the intimate abbreviation implied equal social footing. Whenever the Spectator invited her to write a column for the Diary, a feature of the magazine, the byline referred to her as “Debo.” Other publications of hers include a memoir and a cookery book. Her subject was life in the country, something about hens or sheep or Chatsworth, with just a touch of Marie-Antoinette simplicity.

I was a schoolboy of seventeen when I met the Duchess. My mother had died a few weeks previously, and my father, Alan, was to take me to Ireland, intending, as I understood, that we should distract ourselves on a tour of grand houses. One of them was Lismore, a splendid castle belonging to the Devonshires. In my mind’s eye, I see feudal battlements, a portcullis, an impressive hall. There was nobody my age in the castle. The Duke of Devonshire had arranged for a ghillie to take me fishing in his river. The ghillie saw at once that I had never cast a line. Taking over, he caught a salmon of a ducal size while I watched. Back in the castle, he said with a straight face that I was a natural fisherman.

A dozen people, all except me in black tie, sat down to dinner. Next to me was Lady Elizabeth Cavendish, the Duke’s younger sister. Wondering whether to marry her, Alan was giving her the opportunity to have an opinion about me. In the hall afterwards, the Duchess handed out paper and pencils. Every player had to write the opening line of a poem. The person to the left then took it, completed a rhyming couplet and improvised the next line, and so on round. In the end everybody held a page of nonsensical verses and had to read them aloud. The first line handed to me had the words: “Denys Dawnay with vine leaves in his hair.” Who was Denys Dawnay, and what could these vine leaves be about?

At Lismore, I had no idea that Debo was a Mitford, nor would that have been of much interest to the boy I was then. The Mitfords illustrate the elusive British phenomenon of class. Lord and Lady Redesdale, at the head of the family, were not particularly unusual, and in their day the doings of lords and ladies were presented to the public in tones of humble respect. Nancy Mitford’s novels reduced the manners and foibles, the speech, and even the general competence of that whole way of life, to caricature. With an exact mix of affection and ridicule and exaggeration, she was waving good-bye to the aristocratic England of the past. Nancy Mitford was hardly the English Proust, but she did her bit to shift social perceptions as she, her sisters, and their friends were transiting into today’s world.

Diana Mitford had married Sir Oswald Mosley in Berlin in 1936, with Hitler and Josef Goebbels in attendance. She was convinced that she and her husband would come to power in a remodeled Hitlerite England. When war broke out, Nancy had recommended that the authorities arrest Sir Oswald and Lady Quisling, as she put it. Far from apologizing, they remained die-hard Nazis and anti-Semites, and forever tried to rally kindred spirits around them. Immigrants were beginning to arrive from the West Indies, and, one evening, when I was walking home in Kensington, I came across Mosley and some of his jack-booted thugs mobilizing racist violence.

Through Sonia Orwell, I met Jessica Mitford. If you’d been alive in the Thirties, she was to say to me, you’d have been a Communist. No, I answered, I would have been a democrat. “How wet!” she came back. She wanted to come to London at exactly the moment when I was going to teach summer school in California. We duly swapped houses. And there on the table in the entrance, exposed for shock effect, were the Communist Party cards of Jessica and her husband Bob Treuhaft.

Until then, all I knew of Unity Mitford was a satirical sentence about her in Malcolm Muggeridge’s The Thirties, that scintillating evocation of the period. Jessica had some books that had belonged to Unity, with her annotations in the margins in her large, childish hand. She also had a little clutch of letters. Henry James, I began to imagine, might have put together a Portrait of a Fanatic out of this material.

Back from California, I was commissioned to interview Nancy Mitford. The up-and-down stress in her speech and a selective vocabulary were recognizable Mitford traits. We spoke over two days. She signed one of her books for me, and I find in it a postcard: “I greatly enjoyed your visit and hope you’ll come again.” It was a good idea to write about Unity, she said, but the sisters would never stand for it.

Unity, it turned out, was within living history. Cousins, neighbors in the Oxfordshire of her childhood, girls at school with her, spoke to me in the hope that we could explain why she should have become a Nazi. At a cocktail party I met Anthony Rhodes, a novelist who had given me Italian lessons at a time when he was an Eton schoolmaster. He put me in touch with Mary Humbach, originally from Nottingham. In Munich the two women had become friends and sat day after day in the Osteria Bavaria. Hitler and his cronies lunched regularly in that restaurant. Mary gave me the diary in which she described how Hitler had invited them to his table and their extraordinary friendship was launched.

Why are you writing about this silly woman?, I used to be asked. Because an aspect of Nazism is to be learnt from her story. Albert Speer, Frau Ilse Hess (the wife of Hitler’s deputy Rudolf Hess), and Frau Henriette Hoffmann (the wife of Baldur von Schirach), spoke from first-hand knowledge of Unity’s adoration of Hitler. Colonel von Below, Hitler’s military adjutant, told me that he used to find pretexts for entering the room whenever Hitler and Unity were alone, and he assured me that whatever fantasies Unity may have had about Hitler, he had never done more than stroke her hair. A courtier who had fallen out of favor, Putzi Hanfstaengel, was sure that she had denounced him. Rudi Simolin, the eighteen-year-old daughter of an industrialist and not a Nazi, accompanied Unity when she inspected the apartment in Munich that Hitler was to give her. In front of the Jewish owners about to be thrown out, Unity discussed color schemes and curtains.

Unable to decide whether to betray her country, by staying in Germany, or Hitler, by going home, Unity put a bullet into her brain on the outbreak of war. Her friend Count Janos Almásy retrieved her papers and in due course returned them to Debo at Chatsworth. A Nazi, he had denounced his conservative sister Mädi to the Gestapo. Released from detention, she took revenge by appropriating one of Unity’s diaries and copying others. Mädi’s son, a priest, had inherited this material and presented it to me, “not unlawfully,” in the double negative of my lawyer.

In the course of an uncomfortable meeting, Lady Mosley said that I hadn’t lived through these events and so couldn’t understand them, but the day would come when I would see statues to Hitler and Goebbels in the capitals of Europe. I wrote to Debo. She answered that too many people still alive would be upset by my book, and wrote a letter to Alan with the order, “Call your boy off,” as though summoning to heel a disobedient dog. She and Lady Mosley put pressure on people to refuse interviews or to retract what they had already said.

I have no right to call the Duke of Devonshire by his first name either, but as the storm over publication gathered, Andrew sent me a message that I was not to be put off by Debo, and he was entirely on my side. In the course of a dinner at Chatsworth, Lady Elizabeth had said that the Mitfords were lucky that I was writing about Unity, and not some muckraker who might make anything of Unity and Hitler’s sex life. In the row that ensued, Andrew had to send the footmen out of the room. Perhaps Debo didn’t intend it, but on the pretext of family solidarity, she and Lady Mosley were choosing to cover up for Nazism.

Unaware of the documentation that I owed to long-dead Mädi, these two sisters accused me of twice breaking into Chatsworth, once to burgle Unity’s papers and then to replace them. It so happened that I was raising money for the London Library, and Andrew Devonshire made available a campaign office. Sometimes Debo could not help seeing me. Beautifully dressed, hair in place, every inch the Duchess, she looked past me as though I wasn’t there. We never exchanged a word. I doubt that this is what Charles Moore intended when he praised the full idea of aristocracy, “its seasons and splendours.” Jessica remained annoyed because I had written that Nazism and Communism are two sides of the same coin. I think she felt she’d put me up to a fine to-do, and the publicity was really her handiwork. She had the last word when she inscribed one of her books to “David, pillar of the industry.”

David Pryce-Jones, the author of Fault Lines (Criterion Books), is at work on its successor, Signatures.

III The hypocrisy of Noam Chomsky by Keith Windschuttle

IV Why I became a conservative by Roger Scruton

V The power of James Burnham by Roger Kimball