Some homage and farewells 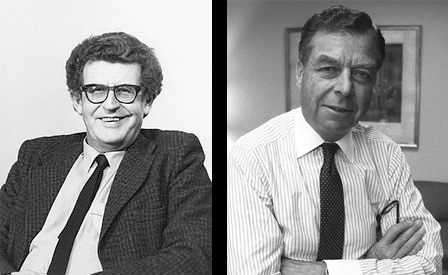 The fact that The New Criterion enters a period of aestivation each July and August means that the prospect of September always bears with it a special poignancy. It is a curious Janus-faced poignancy, casting an assessing glance backwards over the past season and the quickly, too quickly, unfolding weeks of summer—what was done, what left undone—as well as an anticipatory, proleptic peek forwards at the opportunities and challenges awaiting us on the road ahead. The summer of 2013 will always occupy a signal, if melancholy, place in the annals of The New Criterion. We have much to look forward to—the many excellent essays and reflections in the pages that follow provide a tonic foretaste of our thirty-second season—but these past months have also seen the deaths of three intimate members of The New Criterion’s extended family: Kenneth Minogue, Peter Flanigan, and Donald Kahn. Given their close and longstanding relationships with the magazine and its editors, it seemed appropriate to set aside our customary editorial persona and speak singularly of these singular events.

While all three gentlemen were well known, and all three in their separate ways were important to The New Criterion, it is likely that Ken Minogue will be best known to most readers of the magazine. His work appeared frequently in our pages, and some of his essays—I think, for example, of “How Civilizations Fall” (April 2001), “Democracy and Political Naïveté” (March 2006), and “Marriage in Our Time” (June 2009)—are among the most important we have ever published. Ken, who died suddenly in June at eighty-two, was widely recognized as one of the most insightful political philosophers of his generation. New Zealand–born, Ken was a fixture for decades at the London School of Economics. He studied with the great conservative philosopher Michael Oakeshott, whose urbane, understated skepticism made a deep and lasting impression on Ken’s thought and, through him, on two more generations of students. The full power of his thinking was already on view in his early classic The Liberal Mind (1963), which provides one of the most thoughtful, penetrating, and ultimately devastating anatomies of the liberal mindset ever penned. And he did it all with an ebullience and lightness of touch that made the serious business of criticism a smiling affair. The story of liberalism as liberals tell it, Ken began, is a bit like the story of St. George and the dragon. After many centuries of superstition, St. George, having donned the mantle of beneficent Rationality, finally appears somewhere about the sixteenth century. He slays the monsters of kingship and religious intolerance before moving on to such social evils as prison conditions, slavery, inherited privilege, and patriarchy. “But unlike St. George,” Ken observed, “he didn’t know when to retire.”

The more he succeeded, the more he became bewitched with the thought of a world free of dragons, and the less capable he became of ever returning to private life. He needed his dragons. He could only live by fighting for causes—the people, the poor, the exploited, the colonially oppressed, the underprivileged, and the underdeveloped. As an aging warrior, he grew breathless on his pursuit of smaller and smaller dragons.

The Liberal Mind was instantly recognized as a classic in the library of conservative political reflection. It hones in on one of the more melancholy features of liberalism: that so many of its effects are distinctly illiberal. Ken offered a profound reflection on this ironical phenomenon in his last book, The Servile Mind: How Democracy Erodes the Moral Life, a companion or completion volume to The Liberal Mind, which I was pleased and proud to publish at Encounter Books in 2010.

The Servile Mind offers an extended meditation on a curious reversal, at once moral and political: that “while democracy means a government accountable to the electorate, our rulers now make us accountable to them.” The liberal mind, by a curious process of moral entropy, shades gradually but inevitably into the servile mind. Exactly how that happens, and with what consequences, is the story Ken tells in this book.

One of his most searching essays, from June 2003, was called “ ‘Christophobia’ and the West,” which dilated on “the rising hatred of Christianity among Western peoples.” Ken’s subject was not secularism—that reliable coefficient of Enlightenment self-infatuation—but something more visceral: a species of histrionic narcissism Ken denominated “Olympianism,” the quasi-religious efflorescence that triumphs in secular societies in response to the melancholy, long, withdrawing roar of traditional religion on the ebb. Olympianism, Ken observes, is in many ways like a religion, but it is “in the interesting position of being a kind of religion which does not recognize itself as such, and indeed claims a cognitive superiority to religion in general.” Hence the hatred of religion—the “Christophobia”—that follows the spread of Olympianism like a shadow. There is, Ken observed, a curious political side to this development, epitomized by the multicultural imperative: the contention that all cultures are equal, but that Western culture is somehow less equal than others. You can see this at work in the phenomenon of globalization, which operates by spreading Western rationalism along with a deep suspicion of the values that made that rationalism possible. The resulting confusion is the “wonderland of abstractions” whose guiding prejudice is the belief that prejudice has been overcome and consigned to the dustbin of history (St. George rides again). “It reminds one,” Ken concluded, “of Aesop’s frog, who wanted to be as big as an ox, and blew himself up more and more, his skin becoming thinner and thinner, till he burst.”

Ken’s passing is a great intellectual loss for The New Criterion, as well as a personal loss for the editors. We take some small satisfaction in publishing what I believe to be Ken’s last essay, “The Self-Interested Society,” which he delivered to a meeting of the Mont Pelerin Society in the Galapagos Islands in June. This meditation on the limits of benevolence and the persistence of imperfection in human affairs is characteristically Minogueian in its quiet, confidential thoughtfulness. I am sorry that Peter Flanigan, who died outside Salzburg last month at ninety, did not have an opportunity to read it. He would have liked it. The world knew Peter partly as a successful investment banker and consummate political insider. As one of Richard Nixon’s top aides, it is said that he was to domestic policy what Henry Kissinger was to foreign policy.

But Peter was far more than an important behind-the-scenes political actor. He was also a tireless and effective philanthropist. His benefactions were wide-ranging. A devout Roman Catholic, he was exceptionally generous to his local church and Catholic charities. But Peter is probably best remembered—it is one of the things his many obituaries all featured—as one of the central architects of the school choice movement in New York. Why, Peter asked, should teachers’ unions and the liberal establishment be able to foreclose educational opportunities for children who lacked the advantages of their liberal masters? But Peter’s philanthropy was very different from the dragon-slaying variety Ken Minogue analyzed with such thoroughness. The New York Times, in its obituary, sniffed that Peter had the reputation of helping the Nixon administration advance or “cozy up” to “business interests.” A latter-day St. George would naturally frown upon that. “Business interests,” i.e., those interests that actually produce wealth, which the critics of those interests are always eager to appropriate and then redistribute for their own, generally anti-business interests and projects of generalized, abstract benevolence.

Peter understood that what liberals castigated as “business interests” were indispensable to effective benevolence, to what Tocqueville might have called “philanthropy rightly understood.” He understood, too, that there was an indissoluble link between limited government and individual liberty, and he saw that a cataract of statist imperatives was everywhere transforming America into the home of government unlimited. As a long-standing board member of the John M. Olin Foundation, Peter maintained a semi-official interest in The New Criterion for many years. But his real importance to us was more personal. Over the years, Peter became a friend and mentor, a sympathetic sounding board, a perceptive and encouraging critic. Over lunch or dinner, after a performance of Mozart or Haydn string quartets at his home in Purchase, sailing in Narragansett Bay or across Long Island Sound, he offered guidance, insight, advice, and admonition. One of the last times I saw Peter was in early June at an event his children organized in Newport, Rhode Island. They had meant it to celebrate his ninetieth birthday. But Peter wouldn’t come to an event that had himself as the focus. So we called it a “symposium.” A few of us talked about some of the ideas that had animated Peter’s long and fruitful life. All of us celebrated his achievements. I knew Peter had been struggling with heart issues for the past year or so. But he seemed so lively that evening that I reckoned he would go on for several years. Alas, it was not to be.

This summer was full of leave-takings. Ken in June, Peter at the end of July, Donald Kahn, at eighty-eight, in August. Donald, too, died in Salzburg, his adopted city which also adopted him. Donald had made Salzburg his primary home since the mid-1980s, and his benefactions to the city and its illustrious musical life were many. Music, in turn, was at the center of Donald’s life. He was co-founder of the Florida Philharmonic Orchestra and helped many musical enterprises in England. He first came to The New Criterion, quite out of the blue, because of his admiration for the musical criticism of our founding publisher, Samuel Lipman. He knocked on our door one day, chatted with Sam and Hilton for a while and then, upon rising, produced a check, the first of many. At first, Donald was a modest but regular supporter of The New Criterion, but at a critical moment in the late 1990s his extraordinary generosity probably saved the magazine. Donald had been very ill these last few years and our regular email exchange faltered and then fell silent. But his passing prompts me to offer this homage. Ken, Peter, Donald: Thank you for all you did for The New Criterion—and for civilization. Valete.

Some homage and farewells