A farewell to Pope Benedict XVI 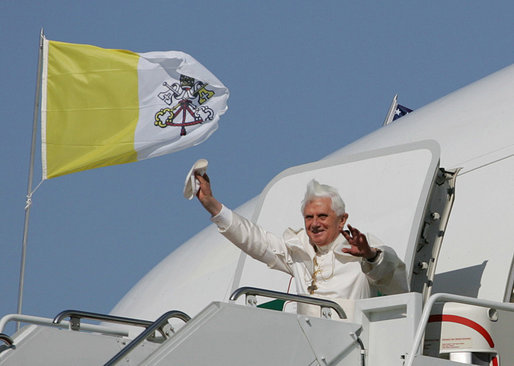 As the world celebrates the election of the Argentinian Jesuit Jorge Bergoglio to the Papacy, we’d like to add our voice of welcome to Pope Francis. We’d also like to take a moment to commemorate some of the cultural achievements of his predecessor, Pope Emeritus Benedict XVI. The Catholic Church, though rocked by scandals over the past decade, has also had the stupendous good fortune—or perhaps we should say that it has enjoyed the workings of a beneficent Providence—in its last two Popes, John Paul II and Benedict XVI, both of whom were intellectual giants. Their effect on the life of the Church and of ordinary Catholics was large and salubrious. And the resonance of their work in the culture at large was also profound. We’d like to remind readers of two important interventions by Benedict.

The first, which we wrote about in this space at the time, was his speech at the University of Regensburg in 2006. Refreshingly forthright on the subject of the differences between Christianity and Islam, the former, he pointed out, had a dual allegiance, to both faith and reason. The latter was guided by faith alone. The result is that Christianity can acknowledge the fundamental legitimacy of individual liberty and the secular realm, rendering unto Caesar that which is Caesar’s, in a way that is utterly foreign to Islam, for which Allah is all.

What really put the wind up was Benedict’s temerity in quoting from a medieval conversation between Emperor Manuel II Palaeologus (a Christian) and an educated Persian at a moment when Constantinople was being besieged by the Ottomans. The Pope quoted this sentence from Manuel: “Show me just what Mohammed brought that was new, and there you will find things only evil and inhuman, such as his command to spread by the sword the faith he preached.”

Result? Muslims reacted according to form. So upset were they at the suggestion that they habitually resorted to violence that thousands took violently to the streets throughout Europe. The Pope was burnt in effigy, at least six churches in the Middle East were trashed, and Leonella Sgorbati, an Italian nun, and her bodyguard were shot and killed at a hospital in Mogadishu.

The mild Benedict was not being deliberately provocative. He was merely speaking the truth. At a moment when Western politicians find it very difficult to speak the truth about Islam, we must all be grateful to Benedict for his courage.

We must be similarly grateful for Benedict’s famous 2005 speech about education and “the dictatorship of relativism.” The speech had a moral component, of course, but it also had an epistemological one, for what relativism obscures above all is “the light of truth.” “Today,” Benedict wrote, “a particularly insidious obstacle to the task of educating is the massive presence in our society and culture of that relativism which, recognizing nothing as definitive, leaves as the ultimate criterion only the self with its desires. And under the semblance of freedom it becomes a prison for each one, for it separates people from one another, locking each person into his or her own ‘ego.’ ” Benedict’s restatement of Aristotle’s criticism of Protagoras’s startling idea that “man is the measure of all things” (for that, when you get down to it, is what relativism is all about) was a tonic blast of seriousness. So many of the institutions entrusted with preserving and transmitting the values of our culture have trimmed their sails, embraced the soma of political correctness, and turned their backs on the animating purpose for which they were created. The Catholic Church has not been immune from these temptations, but Pope Benedict XVI bravely and articulately stood athwart those currents and bade us think again. For that, we all—non-Catholics as well as Catholics—owe him thanks.

II France between the lines by Mark Falcoff

A farewell to Pope Benedict XVI