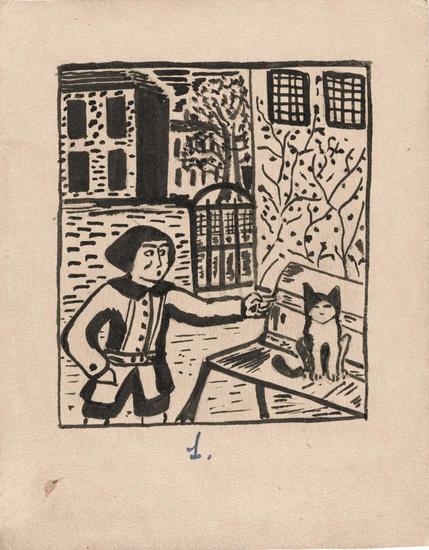 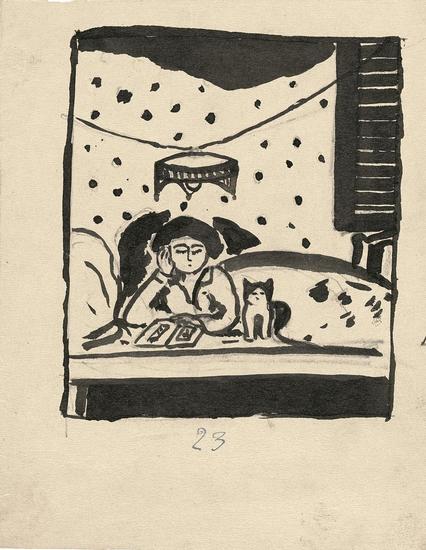 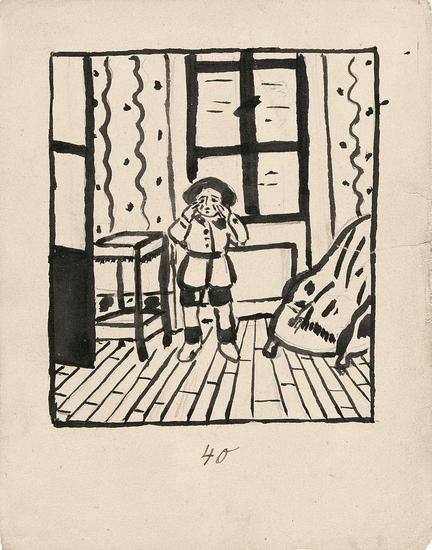 When Balthasar Klossowski was ten, his cat, Mitsou, went missing. In the case of most children, the story might have ended there. Balthus, as he came to be known, exhibiting the kind of exceptionalism that would characterize his whole life, produced a series of forty drawings about her that remains the most extraordinary example of juvenilia in the history of modern art. The graphic tale that he created, from Mitsou’s adoption into the Klossowski family to her unexpected departure, was collected and published under the direction of no less than Rainer Maria Rilke, a friend of the family and his mother’s lover. Rilke supplied a forward to Mitsou: Quarante Images par Baltusz in which he comforted the reader in advance of the unhappy ending. “Calm yourself. I am. Balthus exists. Our world is sturdy (bien solide).” It was as if genius was holding up reality itself. He then added, with characteristic mysticism, “There are no cats.”

The original Mitsou drawings have long been thought lost, but the Metropolitan Museum’s Sabine Rewald, in a magnificent act of curatorial prowess, located them. Now, along with a focused selection of early and mid-career paintings, the Mitsou drawings are being shown for the first time in “Balthus: Cats and Girls—Paintings and Provocations.” These drawings are not the fumbles of a talented boy. They exhibit bold design that would be the envy of the German Expressionists, with the difference that the expressionists had to fake the naïveté. They’re inked with a brush, reducing forms with marvelous economy to black solids. What’s more, in the depictions of the Klossowski family and Mitsou’s antics around the house, his father Erich and his mother Baladine, artists themselves, both make appearances. His brother Pierre does not. Children can be imaginative but can also be quite literal. The inclusion of Pierre would have deleteriously complicated the drawings and the narrative told in them. The choice to eliminate him evinces Balthus’s prodigious artistic powers as much as his dexterity does. With an assertion of Rilkesque authority, there was no Pierre.

This ability to impose order upon the world, commanding elements in and out of existence, was so pronounced that it made a hash of his biography. Indeed, more tenable claims to nobility have been made than Balthus’s taking up of the Rola coat of arms and styling himself as a Polish count. It’s indisputable, though, that Balthus had the temperament of a monarch, even if the whole of his rightful kingdom was the easel. In 1935, aged twenty-seven, he proclaimed himself His Majesty, The King of Cats on a placard propped up against a stool in a self-portrait in which he stares dourly at the viewer, holding his lapel in a confident pose, while a beast of a tabby rubs up against one of his regally elongated legs.

Aspirations to both nobility and felinity remained themes throughout his life. “I assert my catlike nature,” he said in a conversation recorded by Cristina Carrillo de Albornoz. “Like me, [cats] are sometimes cruel, but never vulgar.” He went on to praise Louis XIV and feudalism. “Human relationships based on protection please me a lot,” he explained. So as not to retread territory covered by the Met’s 1984 Balthus retrospective, “Cats and Girls” confines itself to works prior to his appointment as the director of the French Academy in Rome in 1961, and among them, mainly, the female figure. Despite all the salacious interpretations that critics have made of Balthus’s work—not all of which are unwarranted—cats, as stand-ins for the artist, appear in these pieces as guardians and witnesses. 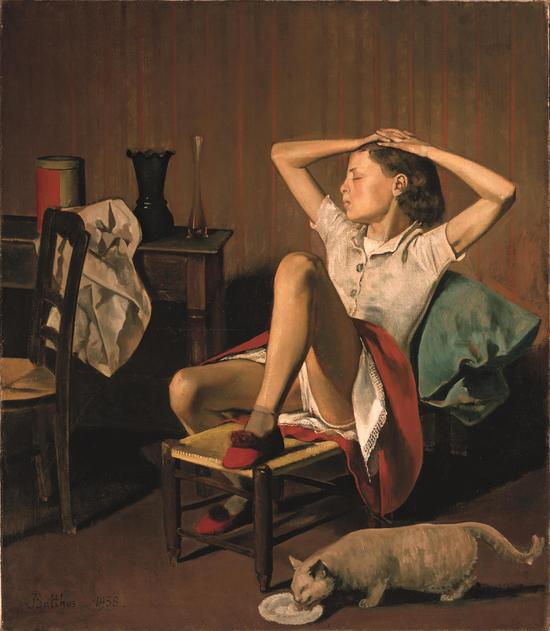 Whatever their state of dishabille or depilation, the girls here are often active, in the midst of reading, playing cards, or studying the view. When displaying themselves, they do so with an element of will, as if the viewer is looking at them partially on their terms. Thérèse Blanchard, who posed for several works from the 1930s, has such a grimness about her that even when her pose reveals her underwear in Thérèse Dreaming (1938), she comes off more as a hellion than a tease. The nude in The Room (1947–48) presents herself with an outstretched hand as if making introductions, while her clothed female companion looks admiringly at her face.

As Balthus continued to paint, his models turned into avatars, evoked to help establish a visual ideal. That’s not to say that they’re indistinct. We can be sure that certain canvases were painted from, for instance, his first wife Antoinette de Watteville, however neotenized. She appears in Girl in Green and Red (1944) as if half her real age, looking like she has rudely stabbed a loaf of bread on the table in front of her. A Freudian analysis of this act might be apt and illuminating, but the triangle formed by her sloping arm, the tilting knife, and the table delivers such a graphic wallop that this must be its main purpose. In The Game of Patience (1954), the figure is a hazy memory of the model who posed for another version of the painting from 1943. She is a curvilinear abstraction, placed atop a table and chair which gave the artist an opportunity to play with negative shapes around the legs of both furniture and model. Yet she has dimension, both physically and psychologically. Balthus is known to have studied Chinese painting. The geometric simplification, schematic features, and elegant but peculiar proportions of this girl make me think that he took a hard look at Chinese sculpture as well. 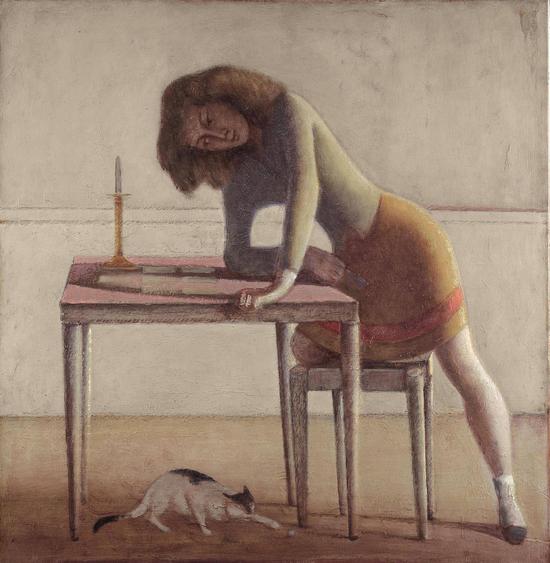 For all his admiration of Piero della Francesca, and with similar aspirations to order the visual world, some of these canvases are plagued with doubts and look abandoned. The left hand of The Cardplayer (1947) and the area around it cry out for resolution. There’s a befuddled scrawl of pencil on the pink skirt of the reader in one of the Salon pieces from the early 1940s, and rejected limbs appear in the underpainting. This is the frustration of Balthus’s work, made plain by the display of the Mitsou drawings: One sometimes wishes that he would summon the ingenuous verve of his eleven-year-old self, put a damn shape down, compose the rectangle, and be done with it.

But the mature Balthus was attempting to accomplish Piero’s certainty by way of Cézanne’s patchwork, in which the canvas is a web of relations that must be assembled one strand at a time, each of which is a consequential problem. Meanwhile, influences as diverse as Georges Braque and the Song painter Guo Xi weighed on the effort. This challenge to synthesize such a broad scope of the history of representational painting makes even his failures interesting to examine, and when he succeeded he produced majesties such as Nude with Cat (1949), at once a luminous interior scene and an enchanting rhythm of neutral shapes. The cat and the nude reach out to each other, his gesture playful, hers languorous. The picture is at once psychologically charged, carefully envisioned, and inscrutable. It is a reality held up by genius.

Franklin Einspruch is an artist in Boston.

V The West that wasn’t by Andrew Roberts