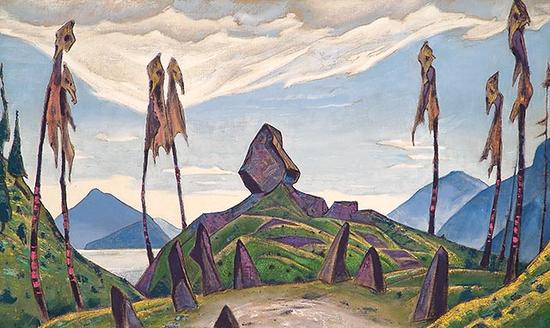 We are near the end of our centenary celebration of 1913, the annus mirabilis of modernism. But much of what started then still seems like unfinished business. Last month, Valery Gergiev and the Mariinsky Orchestra called forth a sonic reminder of 1913 with a concert performance at Carnegie Hall of Stravinsky’s Rite of Spring—the hard-charging, slashing creation that Serge Diaghilev’s Ballets Russes famously dropped on Paris on May 29 of that year. Then and now, what made the Rite so modern is not just its innovative sound but also its exploration of ritual. The ballet’s subtitle, after all, is Pictures of Pagan Russia in Two Parts.

Unfortunately, mysticism, so influential to early modernism, has largely been scrubbed from the history of art (a point that Hilton Kramer sought to correct in his book The Triumph of Modernism). The odd cults and high priests that influenced modernism have been debunked and tossed aside, while the art they broadly inspired has been left out to dry. This may help explain why the Rite’s own spiritual mentor has been largely forgotten. Beyond Stravinsky’s sound and Nijinsky’s dance, the Rite owes its debt to Nicholas Roerich, the Russian-born artist, archaeologist, explorer, preservationist, and guru who not only provided its costumes and sets but also its mystical inspiration. 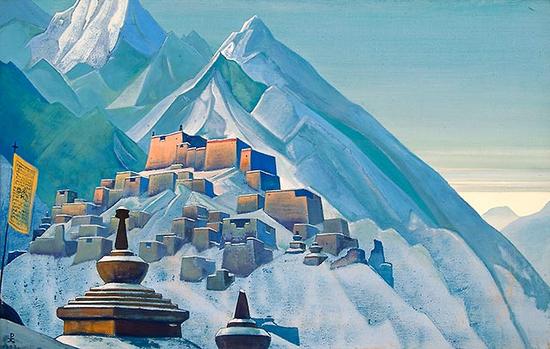 At the premiere of the Rite in 1913, the Paris audience, erupting at the opening bars, grew into a riot that famously drowned out the orchestra. The ballet’s expressions of ancient rituals and primitive sacrifices, which came out of Roerich’s research into pre-Christian Russian culture, still excites and repels. “The audience whistled and roared so that nothing could even be heard,” Roerich recounted of opening night. “Who knows, perhaps at that very moment they were inwardly exultant and expressing this feeling like the most primitive of peoples. But I must say, this wild primitivism had nothing in common with the refined primitiveness of our ancestors, for whom rhythm, the sacred symbol, and refinement of gesture were great and sacred concepts.”

Roerich may be one of modernism’s lost founders, but his multifaceted legacy has not been fully forgotten. Fortunately for us, we can revisit it six days a week in what may be New York’s most surprising little free museum. Located in a townhouse at 107th Street off Riverside Drive, the Nicholas Roerich Museum has deep roots in this unsuspecting neighborhood of the Upper West Side—going back even before its founding in 1949.

Roerich was born in St. Petersburg in 1874. Here he met Diaghilev in law school and moved among the city’s advanced artistic circles. The two were editors of The World of Art, a short-lived but influential modernist journal. After the Russian Revolution, Roerich became an exile and moved for a time to the United States, where he and his wife, Helena, quickly built up a new following. (As the author of a book on the foundations of Buddhism and a Russian translation of Blavatsky’s Secret Doctrine, Helena was the guru’s guru.) 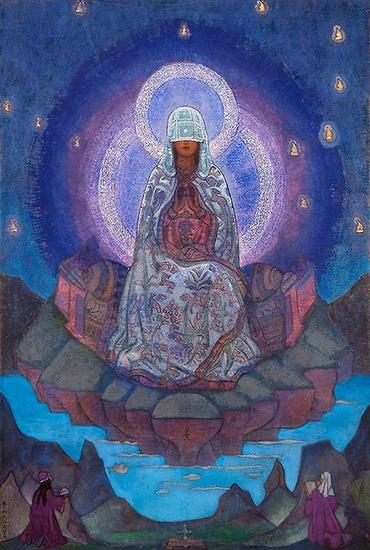 Nicholas Roerich, Mother of the World, sketch from Banners of the East series, 1924

In 1921, Roerich founded the Master Institute of United Arts, a New York–based school that was to be part Bauhaus, part ashram, dedicated to teaching across the artistic disciplines. Believing that “culture is an accumulation of highest bliss, highest beauty, highest knowledge,” Roerich set about transmitting his spiritual idealism through the study of master artists and artisans. His New York influence became so widespread that in 1929 the Institute erected its own skyscraper, the Master Apartments on 103rd Street, which may be the city’s most unsung art deco building and remains the tallest structure on Riverside Drive. To underscore its spiritual purpose, Roerich originally wanted the building topped with a five-story stupa.

Like many great schemes, Roerich’s school came undone during the Great Depression. His New York–based collection, as well as his devoted following, reemerged in the current museum. Today its townhouse is packed with 150 Roerich paintings and many more drawings, books, and religious artifacts, mostly drawn from his extensive travels in India and the Himalayas. (Even as his New York institute rose, Roerich and his family settled in India’s Kullu Valley in 1928, where he died in 1947.) Even some of Roerich’s costume and set designs for the Rite are on view—part of a collection that serves as a window onto the unseen, including the unseen influences of modern art. 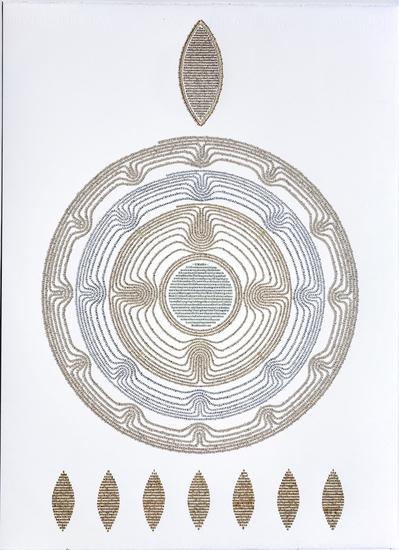 Now up at Bushwick’s Studio10, “Meg Hitchcock: The Land of Bliss” brings mysticism back to serious art in a profoundly moving show.1 Born into an evangelical Christian family, Hitchcock stays true to something fundamental even as she seeks to broaden the practices of faith. Hitchcock begins her work by cutting out individual letters from holy books, largely antiquarian copies of the Bible, the Upanishads, and the Koran. She then meticulously rearranges these letters onto paper so that they spell out prayers from another faith—a “Mantra (to Amitabha)” from the letters of a Koran, an “Amazing Grace” from a Bhagavad Gita, a “Te Deum” from a Koran, a “Land of Bliss, the Larger Sukhavati-Vyuha Sutra” from a Bible. 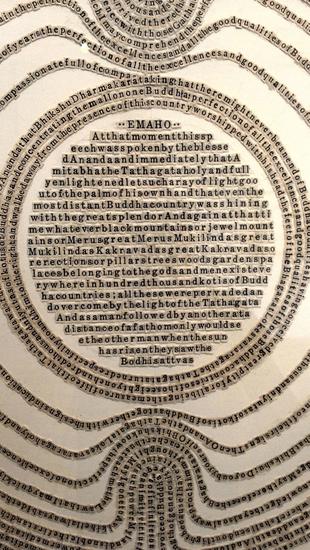 Detail of The Land of Bliss

The obsessive precision, or the precise obsessiveness, of Hitchcock’s collage work was on full display two years ago at the influential Ridgewood gallery Famous Accountants. In that show, called “Obsession,” she wrote out the Book of Revelation from letters cut from the Koran, plastering it letter-by-letter in a swirling line across a basement wall.

The astonishing artistry of Hitchcock’s work is even more apparent at Studio10, where we can see her collages not only written out but built up, letter over letter, in patterns that form sculptures in relief. Although her work begins in what some believers might consider the desecration of sacred texts, her art becomes reverential, even worshipful, to the various faiths she represents. Hitchcock says she no longer maintains any particular belief system. Yet her process has become a devotional practice in itself, with work that is a testament to all faiths, including her faith in art. 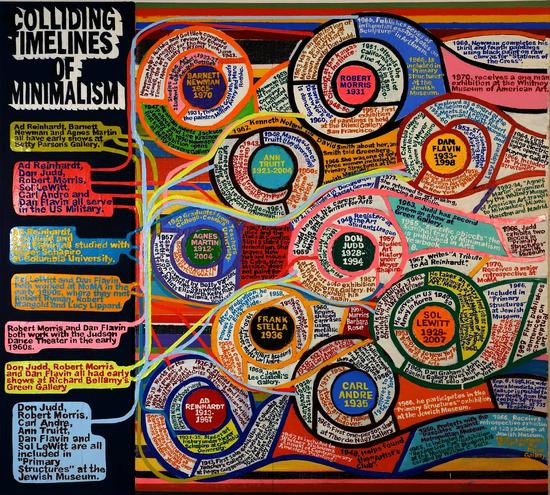 For a paired show that few might have predicted, Ridgewood’s Valentine Gallery has matched the figurative Judith Linhares and the informationist Loren Munk together, with Rebecca Litt in the project room.2 Linhares came to prominence in the “bad painting” era of the late 1970s, but here “bad” meant the freedom to experiment with a mixture of influences. In Linhares’s case, Abstract Expressionism, German Expressionism, and figurative painters ranging from Louisa Matthiasdottir to the cartoonish Chicago circle known as the “Hairy Who” come together in trippy nudes modeled in bold lines and colors.

Loren Munk has appeared several times in this column both for his paintings and his documentary work, which he posts on YouTube under the name James Kalm. Munk may now be best known for his “map paintings,” where he pinpoints the locations of galleries and artist studios in signage-like compositions. At Valentine, he flips the maps around, this time plotting the reception and history of art in impastoed flowcharts. Fred Valentine, himself a painter of intense figurative visions, connects these two diverse artists together through their supernatural use of color. Both artists have something of a “de-skilled” color sensibility. Chromatic harmonies become distorted through over-amplification. The effect gives their respective work an outsider edge that can be powerfully weird and greatly enchanting. 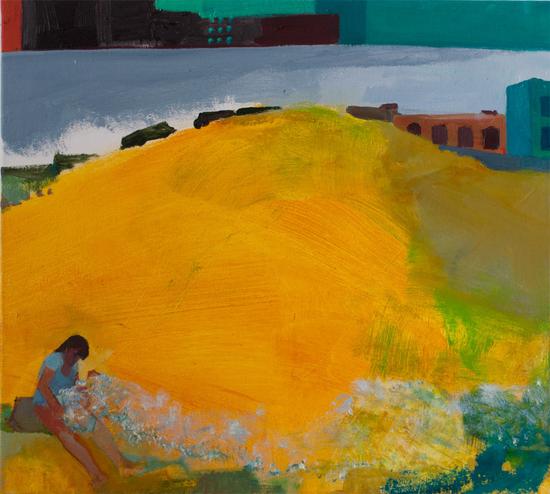 Matched in the gallery with Linhares and Munk is Rebecca Litt, a Brooklyn-based painter of the younger generation (who is also, full disclosure, my colleague at this magazine). With self-portraits set in odd, allegorical landscapes, Litt places her characters amid the empty lots, construction zones, and dirt piles of the industrial outer-borough landscape surrounding her Bushwick studio. One of Litt’s recurring motifs is the mylar construction fence, now a common feature of the urban landscape. In Litt’s compositions, pointillist figures pop through and become enmeshed in these obstructions. With several of these smaller “fence” works assembled together, Valentine draws his color connections from Munk and Linhares to the neon oranges and greens of these artificial webs.

This past month, color connected another group show called “Color Line” at Outpost Artists Resources—a space that should be called Outpost’s Outpost since it is located on the far side of Bushwick. Curated by the artist Rico Gatson, this exhibition aimed to move color “beyond the surface” with artists whose interests include “commodity culture, social politics, the metaphysical, formalism, and whimsy.” With a program that might sound overly theoretical, Gatson's selection in fact ranged from eye-opening to eye-popping, with work that was uniformly excellent and rightly demonstrated how color remains relevant to a wide range of artistic pursuits. Standouts included a urethane foam sculpture by Ben Godward, textile-like patterns on paper by Robert Otto Epstein, and fascinating computer-generated compositions by Siebren Versteeg. My single favorite was Inner Outer (2013) by Alex Lee Harris. What at first appears to be a colorful, minimalist sculpture is in fact a large theremin, an electronic instrument that generates an oscillating sound at different volumes and frequencies when you pass near its antennae. Here color, form, and sound all come together as one, drawing the show’s color line full circle. 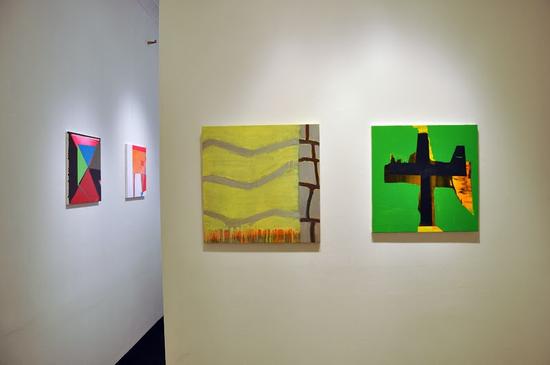 Two new arrivals this month each bring interesting painting selections to Bushwick. “Meta Vista” is a pop-up show curated by the painter Matthew Neil Gehring in the former space of Storefront Bushwick.3 Paul Behnke, Vincent Como, Beth Gilfilen, Jason Karolak, and Joan Mellon, along with Gehring, all bring their own individualistic compositions to small canvases, but they also share the casual, often color-rich approach to abstraction that I have called the Morgantown Touch, after Bushwick’s nearby Morgan Avenue subway station. Matching these paintings on the wall are painted sculptures by Rachel Beach, Rebecca Murtaugh, and Kirk Stoller, who bring this touch out into the third dimension in equally compelling ways. 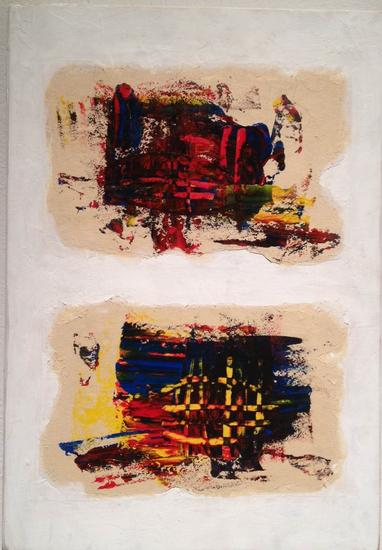 Down the hall from Studio10 is a new gallery called Life on Mars, which has taken on one of the larger spaces in the gallery building of 56 Bogart Street. The large size of this space is a challenge that its director, the abstract painter and punk pioneer Michael David, has tacitly acknowledged with the title of an opening group show called “Scale.”4 Believing that “painting still has power to transform and create meaning and value in our lives,” David says that Life on Mars will embrace work that is “messy, tight, formal, informal, slick, raw, big, little, with figure, without figure, hard edge, loose—a great, big, potentially transformative MESS.” The problem with messes is they tend to look messy, and the optics of this crowded exhibition obscure the many excellent painters it features, including work by Fran O’Neill, Paul D’Agostino, James Gillispie, Christina Kee, and Ben LaRocco. With its worthy goals, my hope is that Life on Mars will learn to use of its space to point out the similarities among painters rather than their differences.

2 “Judith Linhares and Loren Munk with Rebecca Litt” opened at Valentine, Queens, on October 18 and remains on view through November 17, 2013.