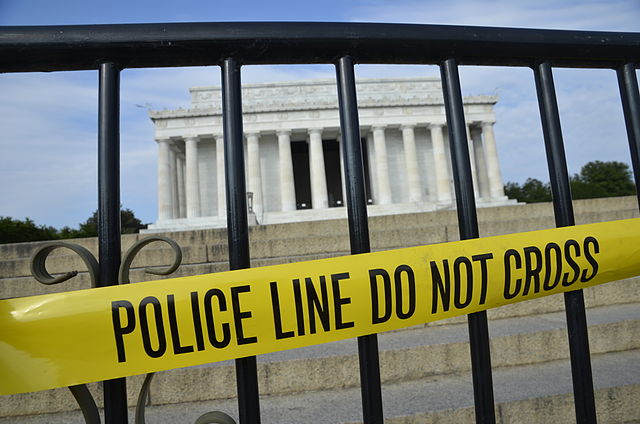 We are all familiar with the shifty use of statistics. The percentage sign is the paralogist’s weapon as well as the statistician’s glory. But we are living in an age of such extraordinary numbers that simply assembling some of the more poignant digits may be an illuminating, if also a melancholy, exercise. Accordingly, we’d like to share with our readers a short inventory of numbers. They pertain to a wide variety of subjects, are gleaned from disparate sources, and bear profoundly, we think, on the health of this great experiment in representative democracy.

In a recent essay about the so-called “Affordable Care Act” (“Obamacare” to the world at large), the historian Conrad Black noted in passing that

the United States has 5 percent of the world’s people, 25 percent of its incarcerated people, and half of its trained lawyers (who now take about 10 percent of the GDP); the legal system is an embarrassment, and the criminal-justice system is a disgrace, in which prosecutors win 99.5 percent of their cases, 97 percent of them without a trial. The legislators of the country are ultimately responsible for this corruption of what the Constitution and Bill of Rights set up as a just and merciful Society of Laws. The terminal cancer of legal paralysis spreads every week of every year.

Some of what Black says is editorializing. “An embarrassment,” “a disgrace,” the “cancer of legal paralysis.” Those are strong words. But go back to those numbers. If they are accurate (and they are), can you think of a cheery interpretation of the realities they describe? What, for example, does it tell us about how the government regards the ideal of the presumption of innocence?

While you ponder that, allow us to present a few more numbers. We write a few days after the pseudo-government shutdown ended and the federal debt ticked up to over $17 trillion. Let’s wheel out the zeros: $17 trillion. That’s $17,000,000,000,000. And that’s just the federal debt. It doesn’t include all the so-called “unfunded liabilities” that the U.S. government—which ultimately means the U.S. populace—is on the hook for. The commentator Mark Steyn peeked into a recent report by the International Monetary Fund and discovered a disquieting number that puts this into some perspective. The net debt of the U.S. government is 89 percent of GDP. Yikes. The author and Harvard professor Niall Ferguson added some watercress to this astonishing statistic. Some commentators are crowing that the federal deficit has fallen to some 4 percent of GDP from a height of 10 percent in 2009. But that drop is no grounds for celebration. For while discretionary spending has fallen (largely because of the sequester), entitlement spending has continued to rise—and will, Ferguson notes, “rise inexorably.”

Casting his eyes over the latest bulletin from the Congressional Budget Office—a fascinating if depressing document the mainstream media have studiously avoided interesting themselves in—Ferguson notes that “a very striking feature” of the report is “how much worse it is than last year’s.” Item: “A year ago, the CBO’s extended baseline series for the federal debt in public hands projected a figure of 52 percent of GDP by 2038. That figure has very nearly doubled to 100 percent. A year ago the debt was supposed to glide down to zero by the 2070s. This year’s long-run projection for 2076 is above 200 percent. In this devastating reassessment, a crucial role is played here by the more realistic growth assumptions used this year.”

This is one area in which the numbers get tricky: “the more realistic growth assumptions used this year.” The magic in the sorts of numbers that Ferguson presents to us is really only activated over time. Do we assume that growth is 4 percent? Or 3 percent? Or 2 percent? Or (as in the first quarter of 2013) 1.1 percent? The differences seem so small—until we add multiple zeros and stretch them out over twenty or thirty or fifty years. Ferguson quotes from the CBO’s 2013 “Long-Term Budget Outlook”:

The increase in debt relative to the size of the economy, combined with an increase in marginal tax rates, . . . would reduce output and raise interest rates relative to the benchmark economic projections that CBO used in producing the extended baseline. Those economic differences would lead to lower federal revenues and higher interest payments. . . . At some point, investors would begin to doubt the government’s willingness or ability to pay U.S. debt obligations, making it more difficult or more expensive for the government to borrow money. Moreover, even before that point was reached, the high and rising amount of debt that CBO projects under the extended baseline would have significant negative consequences for both the economy and the federal budget.

It may be difficult for most people to get excited over such antiseptic prose. No one thrills to warnings about “significant negative consequences.” But here’s the melodramatic nugget: In an age of increasing bureaucracy, notices of apocalypse generally do not feature four horseman or seven seals. Ferguson is correct: “Only a fantasist can seriously believe ‘this is not a crisis.’ ” Right now, today, the government spends about 8 percent of its revenues to service the federal debt. According to the CBO’s projections, that number could rise to 20 percent by 2026, 30 percent by 2049, and 40 percent by 2072.

Of course, predicting future realities by drawing a straight line from present trends is a mug’s game. The law of inertia never operates unhindered. And yet, and yet . . . It’s easy to regard the exhibition of preening self-importance emanating from Washington as a species of grotesque comedy. But notwithstanding the Falstaffian dishonesty of the players (“gross as a mountain, open, palpable”), Ferguson rightly notes that what we are witnessing is not a comedy but a species of “Russian roulette with the federal government’s creditworthiness.” Which means this: So long as the Federal Reserve keeps interest rates near zero and continues pouring money into the economy by buying U.S. Treasury bonds, the “gun will likely continue to fire blanks.” But as the economist Herb Stein observed, what cannot go on for ever, won’t. Near-zero interest rates and a self-subsidized bond market cannot go on forever. So it won’t. Ferguson ends with two facts: 1. More than half the federal debt in public hands is held by foreigners. 2. About a third of that debt has a maturity of less than a year. Is Mark Steyn correct that America is on track to exit the First World? How broke would we have to be to break the country? Perhaps the noise we hear is the sound of horse hoofs galloping towards us after all.

We tend to agree with those who regarded the government shutdown as a species of low political theater. But it was also one of those vaunted “teachable moments.” The shutdown was supposed to impress upon the American people the folly of interfering with the multitudinous activities of the government. National parks and monuments were closed and barricaded, Congressional staff were unavailable to answer questions from constituents, even functionaries at the Library of Congress were gone, making it impossible to get publication data assigned for forthcoming books. Nevertheless, people muddled through. The administration made sure sporting events were not broadcast to the troops abroad—this is a government shutdown, after all—but Camp David and all its recreational facilities were open for business. Its one thing to impose privations on the plebs, quite another to discommode the nomenklatura.

The big lesson of the shutdown,” the columnist and legal scholar Glenn Reynolds noted, “is that—in a time when so-called ‘draconian cuts’ usually refer to mere decreases in the rate of growth of spending on programs—America was able to do without all the ‘non-essential’ government workers just fine.” It turns out that non-essential personnel really were non-essential.

Reynolds cited an AP poll revealing that 80 percent of Americans “felt no impact from the shutdown.” That same poll—shhh!—also revealed that a majority opposed increasing the debt limit. But that, of course, is now behind us. $17 trillion today; perhaps $20 trillion in a few years. Who’s counting?

We’ll find out in due course, of that we’re confident. But Reynolds makes a point that it is worth pondering further. If all those “non-essential” folks who were furloughed really were non-essential, perhaps there were many more non-essential folks who were mistakenly classified as essential. Consider, for example, all those park rangers, some arrayed in riot gear, who were employed to chase away veterans who wanted to visit various national monuments. Were they essential? And what about the business-as-usual production of new government rules and regulations. That slowed to a trickle during the shutdown, and yet the Republic somehow managed to survive.

Reynolds titled his column “Government? Who needs it.” It’s a good question. One of the biggest tasks facing Western societies is revisiting the question: What is it we want our government to do? (A better way of putting it might be: What things should government not do if government is to remain our government and not the other way around?) Government is better at doing some things—not, perhaps, very many things—than private enterprises, like providing defense. What former Governor Mitch Daniels called the “new red menace” of debt and out-of-control spending is a national, indeed an international emergency. It’s past time that we review the many, many things that governments in the West do that they shouldn’t do. Reynolds has a modest proposal that, unlike Jonathan Swift’s, really is modest:

An across-the-board cut of 5 percent in every government department’s budget line. (You can’t convince me—and you’ll certainly have a hard time convincing voters—that there’s not 5 percent waste to be found in any government program.) Then a five-year freeze at that level. Likewise, a one-year moratorium on new regulations, followed by strict limits on new regulatory action: Perhaps a rule that all new business regulations won’t have the force of law until approved by Congress.

We don’t, frankly, believe that what Reynolds proposes is an answer. But it would be a start. And that is a lot more than we’ve seen thus far from our masters in Washington.