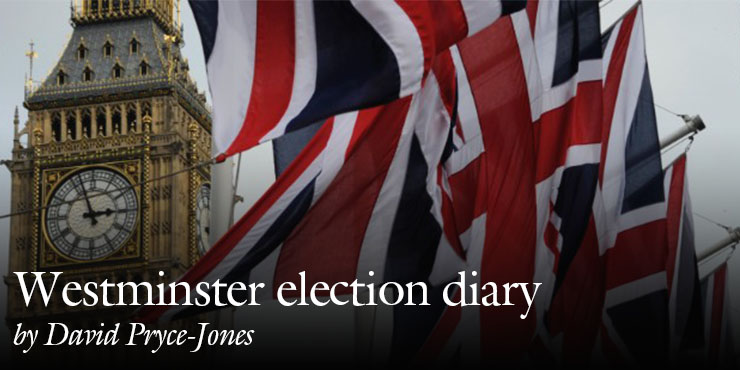 One of Winston Churchill’s most famous bon mots is that democracy is the worst of systems except for all the others. What a tribute!  If Britain were a third world country this election would have ended in violence. Instead, the country’s political scene has been cleansed with an efficiency only slightly less brutal than that of the firing-squad. Ed Miliband, Nick Clegg and Nigel Farage, leaders of three parties unable to perform, had all resigned by lunchtime and will not be heard from any more. The electorate had the chance to expel unwanted figures into the limbo reserved for politicians who failed the tests they are expected to pass.
Out with George Galloway, voluntary trumpeter of Arab dictators. Out with Ed Balls, whose ideological games had wrecked the economy. Out with Vince Cable, who embodied disloyalty to colleagues. Nothing is to be learnt from them and numerous others of the same stamp.  The fate of Ed Miliband, though, has a moral. He intrigued against his brother David, in order to appropriate his place as leader of the Labour Party, only to fail in that position without any possibility of reprieve. The ancient Greeks attributed such self-seeking to hubris, with the necessary payoff of nemesis. This election offers an unforgettable illustration of this age-old understanding of cause and effect in human affairs.

“But we are the people of England; and we have not spoken yet.” Writing that immortal line, G.K. Chesterton was trusting the governed to get the measure of their governors. Getting that measure is the contribution of the people of England to the common good. And gracious heavens, against all forecasts the people of England have done it again. The pundits repeated in unanimous chorus that the Conservatives and Labour were neck and neck. Through the night, though, the Conservatives were winning seats by ever-larger margins, and Labour was losing them. By now, David Cameron is evidently able to form a Conservative government unshackled by a coalition. The astonishment and disbelief of those chorusing pundits, especially on the BBC, is a comedy that lightens the spirits.

The cause of the Labour downfall is simple enough. Ed Miliband, the Labour leader, proves to be a hard-line Leftist, believing that the state should control the individual and the individual should have no control over the state. Resenting capitalism, he wants to control markets and punish through taxation everyone who has benefitted from markets. He reminds me of Mikhael Gorbachev, whose policy of perestroika was supposed to have the edge over reality. One look at him has been enough for the people of England.

The Scottish National Party has captured an almost clean sweep of the Scottish seats, thus smashing beyond repair the previous Labour monopoly. A twenty-year-old student, in one startling instance, has trounced an experienced former cabinet minister. Culturally distinct from the English, the people of Scotland are wandering away into another imaginary landscape of socialism and nationalism. Now where have we had examples of this combination, and has any good ever come of it?

May 7, Midnight. The Witching Hour.

There are still a few generous Londoners who invite their friends to come to their houses during the fraught hours when the votes in a general election are being counted. One such host is Tom Stacey, who has behind him a long and glittering career in publishing and journalism. The crowds in his house have a touch of the fever that is current once the polls have closed and the votes are being counted. Exit polls are only temperature tests, but one of 20,000 voters gives the Conservatives 319, just short of the magic 326 and so in need of a coalition. That same poll puts Labour at 239, plainly second by a long way.

In the previous parliament the minority Conservatives were able to govern because a coalition with the Liberal Democrats produced a majority of 72. Pro-Europe, climate change enthusiasts, pacifists, and always politically correct, Liberal Democrat voters are so disgusted that their party leaders out of pure opportunism formed a coalition with the Conservatives that they have deserted the party. The exit poll gives them just 10 seats, which would leave a renewed coalition with a majority of one.

In the event that the Conservatives cannot find coalition partners, Labour could try to cobble together all the parties of the Left. Ed Balls, a Labour former Chancellor of the Exchequer, came on to the BBC to explain how this trick might be performed, his face gleaming with dishonesty. Scotland was a Labour fiefdom, but the exit poll gives the Scottish National Party 58 of the 59 Scottish seats: in short, it will have eradicated and humiliated Labour. Balls speaks as if a coalition of these two leftist enemies was natural, viable, likely; an admirable way of throwing Conservatives out of the window.

Two conclusions emerge on the horizon. With many fewer votes than the Conservatives, Labour seems willing to try to govern by hook or crook. The absence of legitimacy would certainly destabilize the country. Meanwhile, the frenzy of Scottish nationalism looks set to break apart the United Kingdom.

The night is young, and mischief is afoot.

In the Conservative corner, David Cameron, the present Prime Minister. In the Socialist corner Ed (false bonhomie for Edward) Miliband. It came to me lately that my judgement is coloured by having known the fathers of both these politicians. I was at school with Ian Cameron. Born without heels, he had to undergo many operations. Wearing specially made boots that could not really compensate for the handicap, he played football. Everyone admired the courage. Then when I was literary editor of Time and Tide, a weekly magazine, Ralph Miliband used to come round to the office trying to wheedle into print his childish Marxistic apologias. Yesterday, in a lengthy and detailed profile on Sky Television, a man who knew him well said that Ed was different from Ralph only in the one respect: that he planned to put his utopia in place without violence.

Never mind his startling record of incompetence and ignorance, the implicit class warfare ought to be enough to sink Miliband, his colleagues and his party—but it isn’t so. The Westminster parliament consists of 650 seats, and normally in our two-party system whoever obtains the majority of 326 and upwards forms the government. Recent polls, as well as Cameron and Miliband on the hustings, all estimate that Conservatives and Labour will both finish somewhere in the range of 280 to 300 seats. One prospect, therefore, is the minority government of one or other of the parties, by its nature short-term and unstable.

But special interest groups have mortally wounded the two-party system. Large numbers of Conservatives have split to form the United Kingdom Independence Party (UKIP), for the purpose of leaving the European Union. Instead of wooing them, Cameron has been inexplicably off-hand, not to say offensive. With parlous symmetry, the Scottish Nationalist Party (SNP) is predicted to take all 59 constituencies in Scotland, almost all of which had previously been Labour.

Miliband therefore could obtain fewer seats than Cameron but nonetheless entice the SNP into a coalition, in which case Scots as nationalists would be governing the English. Gnomic pronouncements from Labour politicians suggest that Miliband is indeed planning to set up a government cobbled out of the SNP and other minority parties. The lack of legitimacy would be an unwelcome novelty, nothing less than the democratic version of a coup.

My polling station happened to be in the ominously named Macbeth Street. "Double, double, toil and trouble," I told myself. “By the pricking of my thumbs, Something wicked this way comes.”