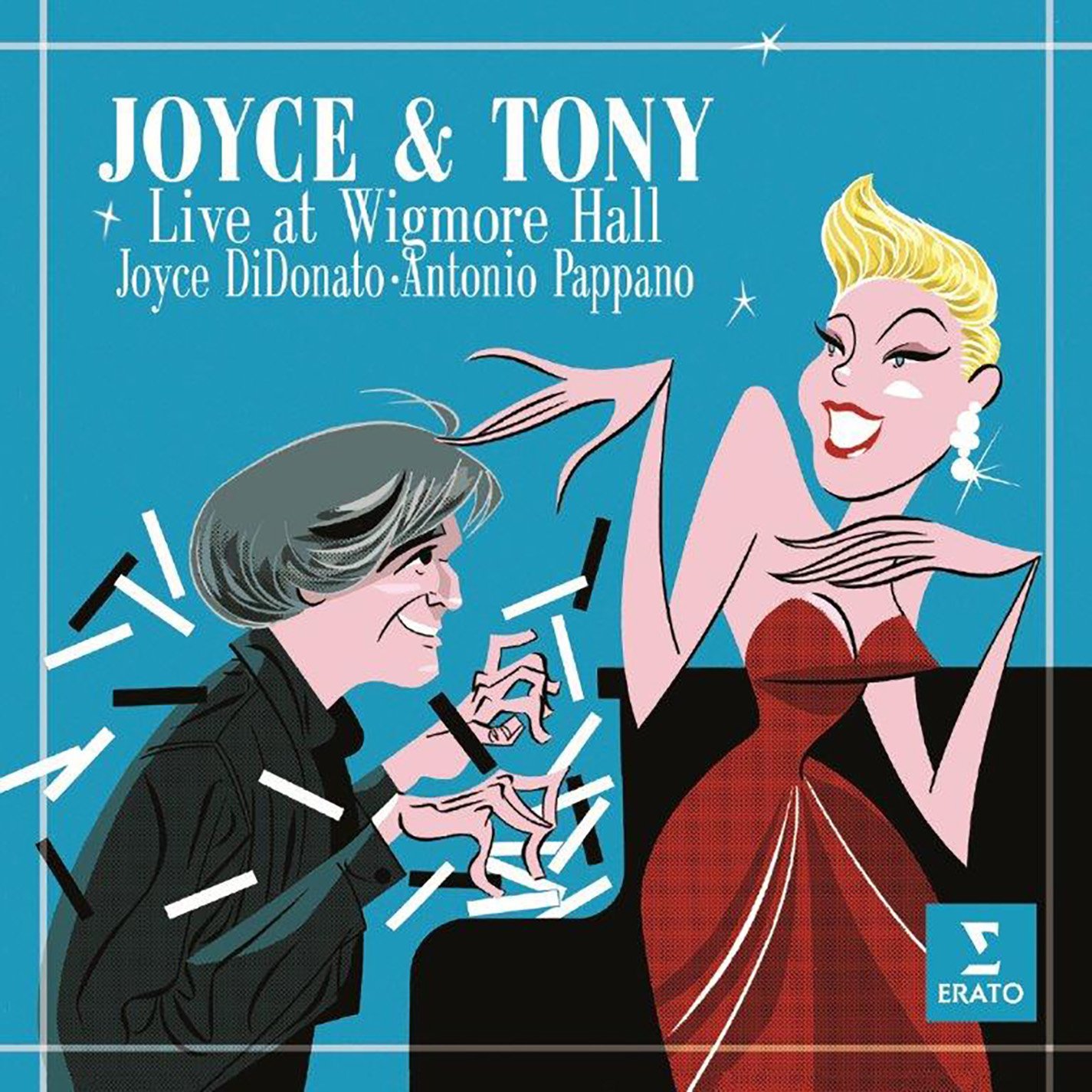 A few years ago, I basically stopped reviewing Joyce DiDonato. Some other critics have done the same. You find yourself saying “Great,” “Great,” “Not as great as usual, but still great,” “Great” . . .

The mezzo-soprano from Kansas is an extraordinary combination of voice, technique, head, and heart.

I will not quite review her latest CD, but I will write about it a little. It’s called Joyce & Tony, Live at Wigmore Hall. Tony is Sir Antonio Pappano, the music director of the Royal Opera House. Wigmore Hall, or “the Wigmore Hall,” as Brits tend to say, is a hallowed venue in London. It’s especially prized for chamber music and recitals. DiDonato and Pappano performed there in September 2014.

Incidentally, this CD has a fabulous illustration or cartoon on the cover, by another Antonio, as it happens: Antonio Lapone. It’s like an extra-jazzy, extra-fizzy Al Hirschfeld number.

For as long as anyone can remember, conductors have liked to sit at the piano and accompany star singers—even if they are not particularly up to it. I think of Wilhelm Furtwängler and Bruno Walter. Then there are conductors who are real pianists, if you will. I think of André Previn and Christoph Eschenbach.

Is Pappano a real pianist? I think he is. I remember a recording that he made of the Shostakovich Cello Sonata with Han-na Chang. Should he quit his day job (or night job, maybe we should say)? I don’t know about that, but he handles himself very well at the piano.

I might add that, for the last 15 years or so, I have been expressing the hope that he will succeed James Levine as music director of the Metropolitan Opera, when the time comes. But London will probably rise up in a kind of reverse revolution.

(Levine, by the way, is another “real pianist” who is very much a real conductor.)

The new CD is actually two CDs—a little set. And CD 1 begins with Haydn’s Arianna a Naxos. Yes, before there was Strauss’s opera Ariadne auf Naxos, there was this cantata. I said I don’t review Joyce DiDonato anymore, but I’ll say a few words about her Arianna. It is lyrical, incisive, gutsy, and intelligent. This is not delicate Haydn, but rather dramatic, operatic Haydn.

DiDonato continues with a couple of Rossini numbers, including “La danza.” I don’t recall hearing a woman sing this before—mainly tenors—but Joyce has a right, and Rossini would love it, I feel.

We next have four songs by an Italian composer with a beautiful name: Francesco Santoliquido (1883-1971). These are the Canti della sera (“Songs of the Evening”), and they reflect a lingering Romanticism. They are lovely and kind. And DiDonato sings them just that way.

On the second CD, we have, in effect, a pops recital. (I can’t swear I coined the term, but I believe I did, and I’m taking credit for it regardless.) The CD begins with Stephen Foster’s “Beautiful Dreamer,” reminding me that Marilyn Horne once made an album of American songs titled, in fact, Beautiful Dreamer. I happen not to care for the arrangement that Joyce and Tony use: it’s too busy for me, robbing the song of its simplicity and timelessness. But this is a matter of taste.

Joyce sings five songs by Jerome Kern (not in a row), including “Life upon the Wicked Stage,” from Show Boat. She sounds so American in this song. Of course, you’re supposed to.

One of William Bolcom’s most popular songs is here, namely “Amor.” Between Jackie (Marilyn Horne) and Joyce came Flicka—the American mezzo Frederica von Stade. She, too, sang “Amor,” and scored big with it. It’s an absolute charmer.

Cover your ears, children, because I’m going to talk politics for a second. “Amor” paints a picture of a wonderful, magical day. The words are by Bolcom’s frequent collaborator, the late Arnold Weinstein. His poem includes one of my favorite examples of economic illiteracy (no offense). It is a kindergarten Marxism, which I learned, and which almost everyone learns, I gather.

Most of us outgrow this kind of thinking. But others become poets, musicians, theater directors, leaders of the Labour Party . . . At any rate, “Amor” is a wonderful song, in its words and music.

DiDonato sings three encores, the first of which is “All the Things You Are,” from a Kern-Hammerstein musical, but not Show Boat: Very Warm for May. DiDonato sings this song purely, radiating what I can only call goodness. She then turns to Irving Berlin, his “I Love a Piano.” In this song, Berlin talks about Paderewski, a great virtuoso of the time. But Joyce sings, “And with the pedal I love to meddle/ When Maestro Tony comes to play./ I’m so delighted that he decided/ To put that old baton away.” Pappano, for his part, interpolates some piano pieces into his accompaniment. He is very deft.

To close, Joyce sings “Over the Rainbow,” as she often does to say goodbye. Let me quote from a 2011 review of mine:

DiDonato sang three encores, the last of which was “Over the Rainbow,” that Harold Arlen masterpiece. Before she sang, DiDonato explained that her father didn’t care for Judy Garland, practically forbidding her in the home. Quipped DiDonato, “Who would have known that I would grow up to have so many Friends of Dorothy?” The crowd hooted in appreciation. Then DiDonato sang “Over the Rainbow” as purely and beautifully as possible. A recital by her is not merely a clinic in singing; it is a lifter-up.

On the two CDs of Joyce & Tony, we have two top musicians having fun, loving music, loving their own talent, and loving their collaboration. I’m so glad their time at Wigmore Hall was recorded.