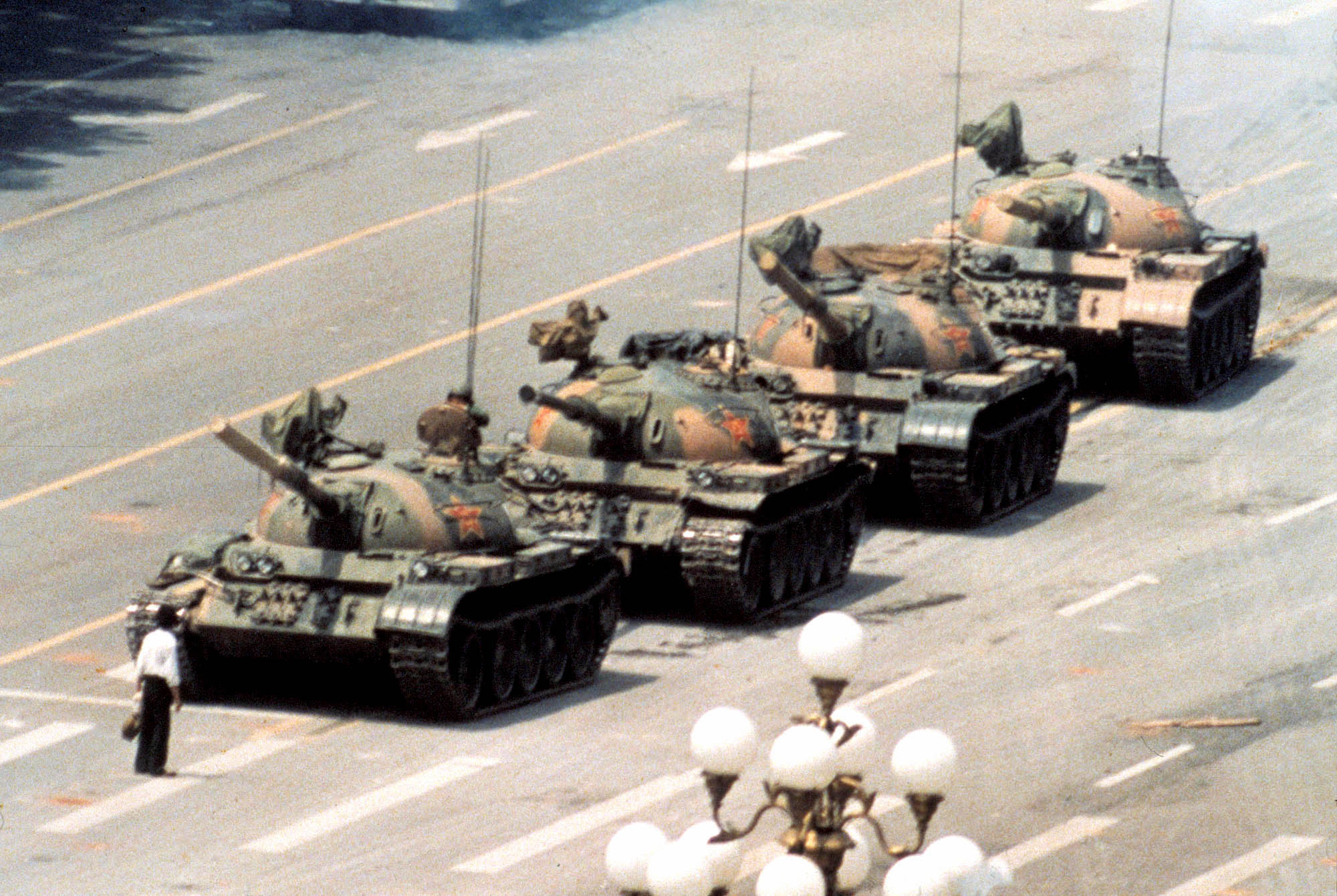 The problem with remembering the 2,000 to 3,000 Chinese citizens—many of them students—killed and injured twenty-five years ago today as the People’s Liberation Army sacked Beijing is that the murder has not stopped. The war for freedom is far from won. We solemnly bow our heads on a Memorial or Remembrance Day of sorts, but the occasion is incomplete, ad interim. The actual day of victory still lies ahead, in an unfathomable and perhaps remote future.

Merciless repression means that on this anniversary the most eloquent speakers for freedom in China are in state custody. Liu Xiabo, aged fifty-six, the 2010 Nobel Peace Prize laureate for his promotion of Charter 08, is serving a cruel eleven-year sentence. In 1989, Liu, wanted as a protester, refused political asylum at the gate of the Australian embassy. A diplomat had driven him there, but as the gate opened Liu said words to the effect of “I am Chinese. China is my country. I will stay here come what may.” Then he thanked his host and departed. His wife, Liu Xia, aged fifty-three, is under house arrest, with her cell phone deactivated, subject to constant supervision and provided with only minimal food and medical care. On January 18 of this year, the Turkic Uyghur scholar Ilham Tohti, aged forty-four, was arrested to face life imprisonment or worse.  May 3 was World Press Freedom Day. In the week before, the fearless journalist Gao Yu, aged seventy, “disappeared” as often happens in China. At the time of writing her fate was unknown.

The most appalling known atrocity of this year came on March 14 when human rights activist Cao Shunli, aged fifty-two, died in Beijing after having been rushed from Qinghe Prison to a military hospital. The cascade of illness that swept her towards death—tuberculosis in both her lungs, cirrhosis of the liver, and uterine fibroids—went intentionally untreated during her incarceration. The government seems to have intended that the hospital should revive her enough that she could be imprisoned again and tortured some more. Instead she fell into a deep coma and died. This was not simply cruel treatment: This was sadism, and it is common.

Nor should we forget the roughly 150 Tibetans who have burned themselves alive in desperation and protest at Beijing’s systematic destruction of their life and homeland. Or the perhaps 500,000 prisoners of conscience. We must peer into the past, too, and recall how Gedhun Choekyi Nyima, the Panchen Lama legitimately chosen by the Dalai Lama, “disappeared” in 1995 at the age of six to make way for what Beijing hopes will prove a puppet.  Gedhun Choekyi Nyima, now an adult, has been missing for nineteen years. His whereabouts are completely unknown.

Violence alone secures the rule of the Chinese Communist Party. It is liberally employed. Apolitical people are regularly killed or tortured to death by, among others, the thuggish employees of the shadowy “City Urban Administrative and Law Enforcement Bureau,” which was recently created to keep “order” in the cities at whatever cost. But sometimes, word of their atrocities gets out. Ten months ago in Beijing, these thugs beat to death a simple watermelon seller, aged fifty-three, allegedly because his stall was incorrectly placed. This action brought enraged crowds to the streets in the capital and elsewhere, and even a story to The New York Times (three officials were subsequently imprisoned).

Truth be told, the United States and the free world have never before in their history been so deeply, and so uncritically, involved with such a huge, rich, and militarily powerful outlier or rogue state. The history stretches back to the 1970s. Today we simply do not know what to do: The Dalai Lama, who has never killed anyone, is secreted into the White House by the basement garbage door and entertained in the Map Room. The president of China, with blood to his elbows, comes in the front, to the Oval Office and a State Dinner.

Who can say what official statements will be recorded for this year’s anniversary of Tiananmen from the White House, Downing Street, the Quai d’Orsay, Japan’s Gaimusho, and other capitals of the free world? I do not expect a flood. But permit me to leave to others the impossible puzzle of how Washington can be a cordial friend of one of the most un-free of un-free countries in the world. (Freedom House finds both China and Russia “un-free,” but China gets a score of 6.5—with 7.0 being the worst—while Russia ranks a full step higher at 5.5.)

Let us instead recall that terrible night twenty-five years ago. For weeks since the death in April 1989 of the deposed liberal Prime Minister Hu Yaobang, fresh breezes of freedom had been felt all over China: Students had begun to gather in Tiananmen Square to commemorate him and a petition by Chinese students had received extensive coverage overseas. At a University I regularly visited, I found the atmosphere transformed. Students were full of contagious enthusiasm about the new freedom. The president of the university delivered an address at which he was asked whether he supported democracy. Being the long-time Communist that he was, he memorably declared: “Not only do I support democracy. I would consider myself a failure as a teacher if my students did not support democracy, too.”

But this festive move wouldn’t hold. As midnight approached on that fateful day, lines of Armored Personnel Carriers and tanks entered Beijing. The air filled with tracer bullets. Fighting and deaths were reported at key intersections near the city center. People screamed, “Fascist! Fascist!” A Chinese man was explaining that the bullets were not real when he slumped abruptly over a wall, his chest fatally pierced. Citizens beat stray soldiers to death. Blood was everywhere. As dawn approached, friends dragged an English journalist out of the fray. The group retreated to the sanctuary of the new Jianguo Hotel, and an Italian colleague handed him a spent shell casing. “Keep this,” the Italian said, “Tomorrow they will say no shots were fired.” And so it was.

How many died? A People’s Liberation Army defector cited 3,700 dead as a secret Chinese figure. Other estimates vary from hundreds to 10,000. When the truth comes out I suspect it will be shocking.

And what of the immediate aftermath? After the massacre, Beijing sent not one but two successive special investigative teams to find evidence and arrest the outspoken university president. Easy as it usually is to fine at least one turncoat, however, no one—not a noodle seller, not a disgruntled professor—admitted to either team having any recollection of this speech, which was already legendary.

In America, President George H. W. Bush was livid at not having been warned.  But the American Ambassador James R. Lilley, whose intelligence had long indicated that troops were massing out of sight beyond the city limits, had earlier sent a detailed telegram, for President Bush only, warning of an inevitable bloody culmination to the situation in Beijing. The State Department, disagreeing and in violation of procedure, intercepted it, and it never reached the president’s desk.

In the years since, official denial of the massacre has been complete and seamless. The square has been completely repaved. Banks of flowers have been installed. True, it is closed at night; a bus full of police can usually be found nearby, and subway or underground stations nearby have security procedures. The students I teach today, however, were born after all of this and know nothing at all save what a brave parent will risk telling them.

Foreigners, too, have mostly fallen in line as well. The United States imposed brief sanctions. But even before the tank tread-marks had been covered, the president sent his security adviser to tell Deng Xiaoping, who probably made the final decision to carry out the atrocity, that the president of the United States “would always be your friend.”

Memory has proven short. By my count, there have been only two academic commemorations in the United States this year, one at Harvard and one at St. Joseph’s in Philadelphia.  Participants and witnesses are a quarter of a century older: retired, going white, not fit enough to run far on “Changan” or “Eternal Peace” Avenues where the struggle surged.  A memorial petition has been circulated around the world.  Quite astonishing is the number of experts and authorities who decline to sign.

The battle, however, as news about China confirms daily, is still being fought. People are imprisoned or die who would be free if only they would sign a false “confession.” Change seems still far away, and pundits regularly project today’s China, with its growth rates, etc. far into the future. Change, however, is a permanent feature of Chinese politics.

Democracy has been a common Chinese word since the end of the nineteenth century. For most of the twentieth it has been the single most important word in Chinese political argumentation. The doors of freedom were closed for a while in 1989. But the argument in favor of democracy will certainly catch fire yet again, in a new political crisis. When the wind circles back to the democratic quarter, the never-quite-calm currents of Tiananmen will help to open those doors again.

Arthur Waldron is the Lauder Professor of International Relations in the Department of History at the University of Pennsylvania.